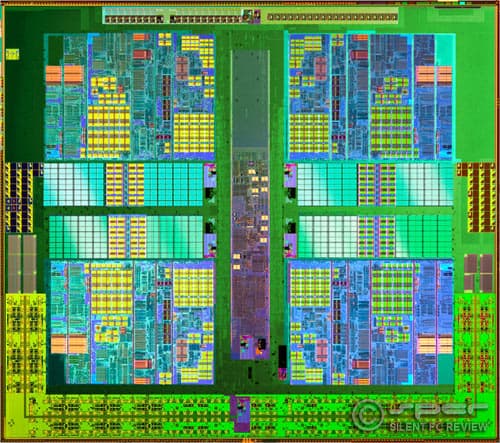 The Core i7-3960X is Intel’s flagship processor for their new Sandy Bridge Extreme (LGA2011) platform. This extravagantly priced US$990 chip is based on Sandy Bridge and has six cores, 15MB of L3 cache, a quad channel memory controller, and a souped up version of TurboBoost.

Intel has the distinction of being the undisputed leader in consumer CPU performance for the past half decade. Three new sockets in as many years (today marks the fourth) were part and parcel of this dominance. In 2008 Intel debuted Nehalem (LGA1366), a high-end premium platform for power users and enthusiasts who needed first class performance. A year later Lynnfield (LGA1156) was released, a more affordable mainstream alternative to tempt resistant upgraders. Also pushed out was Clarkdale (also for LGA1156), a dual core design with integrated graphics for budget and energy conscious users. Finally came Sandy Bridge (LGA1155), which sort of tied everything together, improving on all the best elements of what proceeded it, rolled up into a neat package.

Sandy Bridge left recent Nehalem adopters in a lurch. They had paid a premium for the fastest gear available at the time, and out came a faster, cheaper, more efficient line of CPUs on a different socket. Their top notch hardware was eclipsed, but remained pricey — Intel has this habit of just letting old sockets fade away, forcing their customers who want more performance to either do a complete upgrade or pay more for less to continue on their old platforms. The only thing Nehalem had left going for it was six-core processors, conspicuously absent in Sandy Bridge.

This last advantage has now been negated as well thanks to the arrival of LGA2011. The new socket has, as you can probably guess, 2011 pins, but despite the change, the new line is actually based on Sandy Bridge architecture. Dubbed Sandy Bridge Extreme (or "Sandy Bridge-E"), the main difference is more cores, a new quad channel DDR3-1600 memory controller, a complete absence of integrated graphics, and twice as many PCI Express lanes (a godsend to multi-GPU gamers). A huge amount of L3 cache was also added, and instructions sets updated with Intel AVX, SSE4.1 and SSE4.2, and TurboBoost frequencies were ramped up for a little extra oomph.

Our processor sample is the flagship model, the Core i7-3960X running at 3.3 GHz (3.9 GHz with TurboBoost), a decadent, close to US$1,000 part. Like the "K" series for Sandy Bridge, it’s an unlocked CPU so it can be easily pumped up past 3.9 GHz if so desired. Just a rank below is the significantly cheaper i7-3930K, which will save you about US$435 if you don’t mind a 100 MHz drop in clock speed and 3MB less cache. There’s also a locked 3.6 GHz quad core i7 3820 but sans pricing information. All three chips have a TDP of 130W, a return to Nehalem power figures.

It’s obviously a high-end solution for advanced users and enthusiasts with big wallets, so if you’re looking for value you might as well stop reading now. The good news is that LGA1155 won’t suffer the same fate as LGA1366 — Intel’s next big design, Ivy Bridge is expected to make its way to LGA1155, though support for some of the newer features (eg. PCI Express 3.0, native USB 3.0) will require new chipsets/motherboards.

The Sandy Bridge-E package is significantly larger than Nehalem as its die size is 20.9 x 20.8 mm, taking up 65% bigger more area than Nehalem and twice that of Sandy Bridge. In order to fit 2011 pins more efficiently onto the package, they’re arrayed in a dense hexagon pattern.

Being of a new socket, a new chipset, X79, is required for Sandy Bridge Extreme. We were provided with a high-end Intel model, the DX79SI, which will retail for between US$280 and US$300. Intel also provided us with a liquid cooling unit rather than an old fashioned heatsink/fan.

Our main test procedure is a series of benchmarks, timed tests of real-world applications. System power consumption (AC) is measured with a Seasonic Power Angel during these tests (an average of the first 10~15 seconds) as well as at idle, during playback of a 1080p H.264 encoded clip, and during full CPU load. To stress the CPU we use either Prime95 (large FFTs setting) or CPUBurn depending on which
produces higher system power consumption. The AC system power is then later converted to DC.

Certain services and features like Superfetch and System Restore are disabled
to prevent them from affecting our results. Aero glass is left enabled if supported.
We also make note if energy saving features like Cool’n’Quiet and SpeedStep
do not function properly.

Before we jump into our test results, please note the operating voltages
of the processors tested today as sort of a disclaimer. Different samples of
the same processor run at slightly varying operating voltages which
can affect energy efficiency. Different motherboard models do not apply the exact same core voltage either. According to the latest beta version of CPU-Z, our sample ran at 1.000V both idle and load, though this might be a bug in the software.

(note: all CPUs tested with 2x2GB of RAM unless otherwise indicated)

Running our synthetic CPUBurn/Prime95 stress test caused power consumption the Sandy Bridge Extreme processor to reach FX-8150 levels. In HandBrake, our more intensive real world application test, the i7-3960X did much better. In both cases there was a noticeable increase in power draw for the quad channel memory configuration.

According to RealTemp, our Sandy Bridge Extreme sample hit temperatures of 46~47°C above ambient using Intel’s liquid cooler with its pump/fan running at 800 RPM (the other CPUs were tested with a Scythe Kabuto at the same fan speed; we believe the performance to be roughly comparable). With six cores working to their limits and system power consumption in the ~200W DC range, the 7~8°C increase over the i7-2600K seems reasonable.

In our Photoshop test, the i7-3960X with dual channel memory failed to topple the i7-2600K, falling short by a couple of seconds. A 9% improvement was gained using quad channel though we’re not sure if this is simply due to the total amount of RAM rather than the additional bandwidth. In any event this was the only test where we saw anything more than a negligible performance difference using the quad channel configuration.

A similar result was posted in our WinRAR test, but this time the margin of victory was much greater for the Sandy Bridge Extreme.

The i7-3960X also won our iTunes encoding test, but just barely, and again with poorer energy efficiency. The relative power consumption wasn’t as bad in this test as it did still manage to use less power than all of the contestants from AMD.

A 13% performance improvement over the i7-2600K was noted in our TMPGEnc video encoding test, but it was coupled with a 42~46% jump in power consumption. It was only eclipsed in inefficiency by the FX-8150 and Nehalem based i7-965 XE.

The Sandy Bridge Extreme CPU dominated in HandBrake, typically our most demanding test. It posted a 29% faster time than its closest rival, the FX-8150. Like our TMPGEnc test, the power draw was much greater as all six cores were hard at work.

We arrived at our overall performance score by weighing each test equally (each composing 1/6 of the total). Mathematically, a processor that finishes first in every single test receives a score of 100.

As the i7-3960X won all of our tests, it lands the top spot in our final performance chart, with the quad channel 8GB memory configuration scoring slightly higher than the dual channel 4GB setup. The i7-2600K was about 13% slower overall, but if the weighting was higher for multithreaded applications, the i7-3960X would dominate.

We unfortunately don’t have any testing data on the six core Nehalem processors, but seeing as even the Core i5-2500K beat the Core i7-965 XE rather handily, we can surmise that the i7-3960X would be a significant improvement.

The total power consumed by the i7-3960X during our test suite was more 26~30% higher than the i7-2600K, even though it finished every test in less time. The difference is still a drop in the bucket when compared to AMD’s offerings however.

In both scenarios, the average draw from the wall of a i7-3960X system is similar to that of a machine powered by a Phenom II X4 975.

Putting our performance results back into the equation the i7-2600K is most efficient at both heavy and light load followed by the i5-2500K. The i7-3960X is decidedly second tier, excelling only in the light load scenario. As for AMD… well they’ve got a lot of catching up to do.

The new Core i7-3960X is undoubtedly the world’s fastest desktop processor today. Its quad channel memory controller didn’t provide much of an advantage but it still outpaced the king of Intel’s first Sandy Bridge launch, the Core i7-2600K, by about 13% in our performance tests. Of course where this 6 core, 12 thread Sandy Bridge Extreme really shines is in multithreaded workloads like video encoding. In HandBrake, where the i7-3960X held the biggest performance lead, it destroyed the i7-2600K to the tune of 36%.

However even if it was used solely with HandBrake, it would still be a very poor value as its US$990 price-tag is more than triple that of the i7-2600K. The i7-3960X follows in the tradition of flagship Intel chips, delivering top notch performance but at an staggering cost. The slightly slower i7-3930K might be worthwhile, but again, only if you work all its cores/threads hard. Also to be considered is the significantly higher power consumption, and the potentially sizable gap in LGA1155 and LGA2011 motherboard pricing.

The "old" Sandy Bridge processors still offer excellent performance, superior energy efficiency, lower cost, and even integrated graphics. Best of all LGA1155 even offers a viable upgrade path as it won’t be left out in the cold when Intel’s next generation CPU architecture comes to market. Current or even prospective Sandy Bridge adopters need not fear being left to wither in the wind as Sandy Bridge Extreme isn’t forcing anyone into an upgrade or die situation.

The Sandy Bridge Extreme launch mirrors the Nehalem release, only the performance gain over current high-end offerings isn’t as sizable. Furthermore there are minimal advantages to the new X79 chipset, so that leaves LGA2011 as a platform for the well-off PC enthusiast who is always craving the latest and greatest hardware and the professional who requires heavy duty encoding/rendering power. It’s either a big shiny toy or a necessary productivity tool — for everything in-between Sandy Bridge (non-Extreme) remains an excellent, fiscally sane option.

Our thanks to Intel
for the Core i7-3960X and DX79SI samples used in this review.