The Lian Li PC-Q10 is a rare double threat mini-ITX case. Its all-aluminum construction and large side window give it elegant aesthetics while its heavily ventilated chassis allows for excellent performance.

Over the years Lian Li has produced their fair share of mini-ITX cases in their well known all-aluminum style. The last three models we reviewed all offered ATX power supply support and more notably, multiple hard drive bays. The latter is great for servers but rather wasteful otherwise. For the many users who only have one or two drives, the drive slots needlessly take up a substantial amount of space inside the chassis. The extra room could have been better utilized or shed entirely to make the cases sleeker.

Their latest mini-ITX offering, the PC-Q10, does exactly that, keeping potential storage to a minimum. With a total volume of under 19 Liters and a gorgeous side panel window, it’s easily the slimmest and best looking Lian Li enclosure ever. While its pedigree is well documented, the optical drive slot at the top is reminiscent of the NCASE M1, the similarly elegant and compact all-aluminum case famously crowdfunded, and built on contract by Lian-Li. The PC-Q10 is not quite that small as it can fit a full-sized ATX power supply as well as a 120 mm exhaust fan. Cooling seems to be well addressed with a fully ventilated top and bottom compensating for the solid front and sides panels.

The PC-Q10 ships in a rather plain cardboard box with protective sheets covering both sides of the acrylic window to ensure it arrives scratch free. The accessories are contained in a small white box tied to the interior of the chassis. Inside are all the necessary screws, rubber grommets for mounting drives to bottom of the case, a PC speaker, three zip-ties, and a couple of cable routing hooks. A brief assembly guide and case badge are also provided.

There is not much to say about the interior construction as it’s essentially a hollow cavity aside from the fan, motherboard tray, and drive and power supply mounts attached around the edges. The motherboard tray is thin but does stretch from top to bottom, lending the structure some stability.

Putting together a system inside the PC-Q10 is easier than most mini-ITX enclosures due to the removable panels. The sides, top and front all come off, so there’s plenty of room to work. Connecting cables to the motherboard may be difficult if you have a large CPU heatsink installed depending on where the connectors are located but that’s true of almost all cases. The assembly process is fairly straightforward otherwise.

The system is placed in two states: idle, and load using Prime95 (2 out of 4 possible threads, large FFTs setting) and FurMark, an OpenGL benchmarking and stability testing utility. This puts more demand on the CPU and GPU than any real life application or game. Throughout testing, system temperatures, noise levels, and power consumption are recorded. During the load test, the system and GPU fans speeds are adjusted to various levels in an attempt to find an optimal balance between cooling and noise while maintaining a GPU temperature of 85°C (at an ambient temperature of 22°C).

For our baseline noise tests, the system is left idle, the CPU and GPU fans are set to their minimum speeds. The system fan(s) are connected to controllable fan header(s) and are set to a variety of speeds using SpeedFan. This gives us a good idea of what the stock fan(s) sound like at different speeds with minimal interference from other sources.

When the system fan is disabled and other fans set to minimum speed, our test system measures a very quiet 16~17 dBA@1m. The case fan can bring that figure up to a moderately loud 26 dBA@1m at full speed and can hit any SPL in-between depending on the fan speed. A single moderate speed single 120 mm fan seems insufficient for a small cramped case but the healthy amount of available ventilation should help compensate. 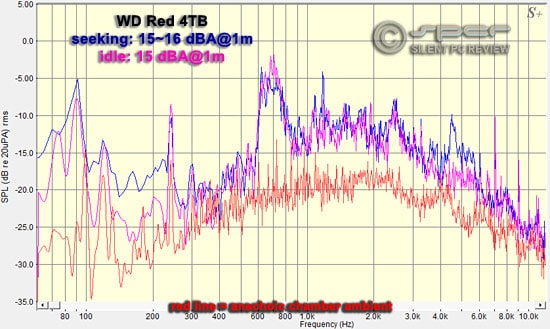 The noise quality is poor. The stock fan is subpar, producing a prominent clicking sound at 50~100% speed that for, some reason, our mic fails to pick up. A low pitched hum starts at 50% speed as well but this dissipates as the fan ramps up. Being hard mounted to the front of the case, our 7200 RPM SSHD’s vibrations can be felt and heard easily as evidenced by the tonal peak at 120 Hz.

If mechanical storage is a must, a low vibration 5400 RPM drive should be utilized. The drive placements on the bottom of the case are better but a 3.5″ drive can’t be used in combination with a dual slot graphics card. Swapping out a fan is easy enough but there’s no simple solution to limit drive vibrations. Placing a block of stiff foam between the power supply and drive helps but not enough to change how the machine sounds.

A few minutes into stress testing, it was soon realized that the stock fan barely had to do any work to generate quiet results. Under our standard testing parameters (two threads of Prime95 combined with FurMark), the CPU fan running at minimum PWM speed was sufficient to keep the processor comfortable while the GPU fans only required a 250 RPM speed bump to maintain a 85°C GPU temperature. The resulting 17~18 dBA@1m SPL was lower than the 19 dBA@1m produced by the stock fan running at 60% speed during our baseline tests so it can’t get much quieter.

Striving for an 80°C GPU temperature only cost an extra 1~2 dB. Adding a third thread of Prime95 (four threads interferes with GPU usage) made the CPU and motherboard heat up a few degrees more but the noise level was unchanged except for a slight increase when shooting for a GPU temperature of 85°C (the power supply fan probably sped up slightly to deal due to the warmer conditions). 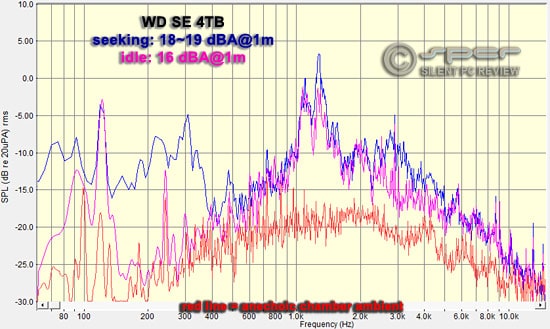 Compared to our baseline tests, the acoustic quality of the system actually improved under load. The SPL is only slightly higher and the GPU fans emit more high frequency noise, helping balancing out the low-pitched hum of the stock fan.

A properly cooled system with our usual reference GTX 980 draws around 280~290W. Our HD 7870-equipped PC-Q10 enters this power consumption range when a third thread of Prime95 is added as a stressor, coming close to compensating for the difference in GPUs. With this equalizer in place, the noise difference between the PC-Q10 and competing mini-ITX cases we’ve recently examined is substantial. The black variant of the BitFenix Prodigy comes closest but trails by 2~3 dB. It’s an impressive feat considering the PC-Q10 is much smaller and has just the lone case fan.

The PC-Q10’s heavily ventilated chassis allows air to pass through the case with ease. As a result, our test system was surprisingly easy to cool sufficiently — the single included case fan only needed to run at 40% speed and the CPU fan never had to exceed its minimum speed. Lowering our GPU temperature standard and stressing the CPU more than usual barely made a dent in the overall results. The noise level was phenomenal, staying below 20 dBA@1m throughout all our torture tests.

From a objective standpoint, the PC-Q10 is a very quiet case purely due to its impressive performance but the noise quality of its lone fan leaves a lot to be desired; it is a clicky annoyance begging to be replaced. The front drive mount needs some kind of damping as the hard mounting is unforgiving about vibration. It’s the only place to install a 3.5 inch drive unless you go forgo a dual slot graphics card.

The placement of the front control panel is unfortunate as it limits GPU length just enough to make some popular high-end cards unusable. With space inside a mini-ITX case being so limited, I wonder why a SFX power option was not offered. An ATX power supply does cover up more cables, but that really should be the motherboard tray’s job. The tray is anemic and doesn’t extend toward the front of the case so it doesn’t hide cabling very well. It should also be noted that there are some mistakes in documentation, the most notable being the maximum CPU cooler height being off by 20 mm, and the Lian Li site touts 240 mm radiator compatibility at the top as a feature despite the fact it would interfere with the power supply.

The Lian Li PC-Q10 is a compact case that perform well while looking elegant. Its striking brush aluminum finish and sizable side window makes it stand out among its shabbier-looking competitors. That being said, the PC-Q10 gives off a vibe that suggests it was designed by engineers focusing on the big picture, rather than PC hobbyists putting extra effort and consideration into the little things. If you had to choose one or the other, it’s hard to argue Lian Li didn’t make the correct decisions. The PC-Q10’s tremendous airflow and attractive aesthetics more than compensates for its deficiencies.

Our thanks to Lian Li
for the PC-Q10 case sample.

The Lian Li PC-Q10 is recommended by SPCR