The Lian Li PC-Q18 is a slightly slimmer PC-Q08 tweaked to focus on its usability as a mini-ITX server. The changes include a four drive SATA backplane, an improved hard drive and side panel mounting system.

Based in Taiwan, Lian Li has a sprawling catalogue of cases for seemingly every shape and size possible in the modern PC era. Particularly impressive are their 14 mini-ITX models, an ambitious number for any case manufacturer. Two years ago we reviewed the PC-Q08, a larger than average mini-ITX tower that offered a bit of everything, including support for six 3.5 inch hard drives. Today we’re going to look at the PC-Q18, an updated version that hopefully addresses the main issue we had with its predecessor: hard drive vibration.

From the outside, the PC-Q18 doesn’t look much different. Like the PC-Q08 and many other Lian Li cases, the exterior is composed of brush aluminum, giving it a shiny, luxurious look compared to traditional steel/plastic towers. The dimensions have been changed slightly; the PC-Q18 is taller (still under a foot) but also narrower, giving it a smaller footprint. The large vent located on the left side panel for the power supply fan has been eliminated, and the tiny screws running around the edges of the side panels are also gone. The panels aren’t secured at the back either, Lian Li has used a tool-less mounting scheme similar to the one employed by SilverStone on the Fortress FT03. The rest of the changes await us inside.

The included case accessories are limited. The obligatory screws, hard drive grommets, and PC speaker are wrapped in tiny plastic bags. The install guide is in black and white but fairly detailed and most importantly, illustrated. The two stock fans inside the case also have 3-pin to 4-pin molex adapters attached by default.

The interior of the PC-Q18 is fairly sturdy, particularly the hard drive cage which has very little give; this is notable as the PC-Q08 has a significant vibration problem. The motherboard tray is a little thin with a bit of flex, but it is removable, a big plus in the eyes of many users.

For thermal and acoustic testing, we assembled a system in the PC-Q18 consisting of an Intel Core i5-2500K cooled by a Scythe Shuriken 2, a Seagate Barracuda 3TB hard drive and a Cooler Master 700W modular power supply. (See full system details on the next page.)

System temperatures and noise levels were recorded with SpeedFan and GPU-Z
at idle and on load using Prime95 (small FFT setting) and FurMark, an OpenGL
benchmarking and stability testing utility.

The PC-Q08 shipped with transparent LED fans which seemed out of place for a server style case, so it’s nice to see the PC-Q18 using the plain black variety. The LanCool PC-K59 uses the same model as intakes, a 14 cm fan with a nominal speed of ~1,000 RPM and generally inoffensive acoustics, at least in open air.

Mounted inside the case, the fans have a muddier character, particularly the top fan which produced a noticeable rattle. The front fan too was a little clicky, but this was only audible at close proximity. While the overall noise character wasn’t great, it was actually an improvement over the PC-Q18’s predecessor. The PC-Q08’s side panels shook audibly from the vibration caused by the fans alone; the PC-Q18 didn’t suffer from this. 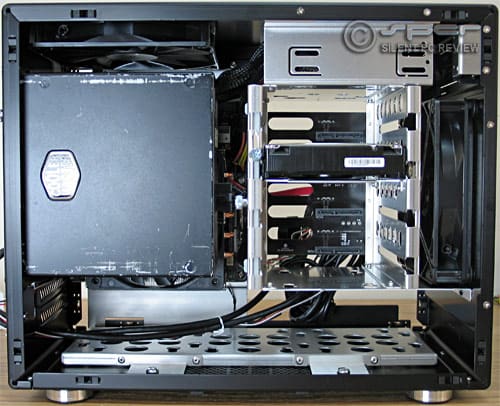 Our test system was fairly quiet with the stock fans disabled, producing 18 dBA@1m both idle and on load, though it did get somewhat hot when stressed. With the fans running at only 5V, internal temperatures reduced substantially and the noise level increased by just 1 dB. Further increases in fan speed resulted in diminishing returns; the added noise was simply not worth the extra cooling. Considering we tested the case using an Intel Core i5-2500K processor, an overkill CPU for a file server, the system ran fairly cool overall.

With the other components in our test system running, the stock fans’ acoustic deficiencies blended away into the background, leaving a mostly smooth, broadband profile. The rattle emitted by the top exhaust fan was still audible, but only at closer distances. 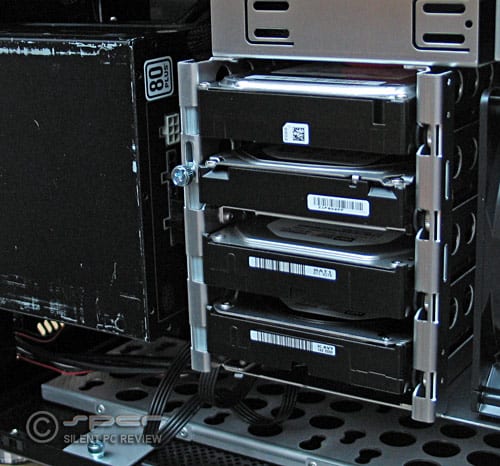 To test the PC-Q18’s suitability as a quiet server, we loaded it up with three
additional hard drives of varying noise and vibration levels to see what effect it would have on the system’s thermals and acoustics.

The addition of three drives to the system increased temperatures all around. The original hard drive in our test system was hit especially hard, experiencing a 9°C spike due to the extra heat being generated and the higher impedance to airflow. The system was also louder of course, by 3~4 dB, a reasonable amount for a four drive system. With the fans running at 5V, everything ran much cooler and the fans were drowned out by the rest of the components, so the noise level remained unchanged.

Some vibration was definitely passed onto the case as we could hear the drives resonating, but not to the same degree as the PC-Q08. When we tested the PC-Q08 with three drives, the rhythmic humming produced actually decreased when we pressed both sides of the case inward with our hands. No such effect could be reproduced on the PC-Q18 loaded up with four drives and it sounded better as well.

Two years ago, Lian Li released a mini-ITX tower that was both attractive and incredibly versatile. The PC-Q08 was solidly built and had support for an ample number of drives, a long graphics card, and a fairly tall CPU heatsink. It was a flawed product however, with the biggest issue being how prone it was to vibration, a serious problem as its most obvious function was as a file server loaded up with four to six hard drives.

The PC-Q18 addresses this issue in several different ways. Its side panels are thicker and mount easily with added security. The hard drive cage has been reinforced, made thicker and immobilized by being affixed to both the top and front of the case. Hard drive mounting has been upgraded as well, with the drives partially decoupled from the case using thick rubber grommets. Removing the metal frame for the front intake fan and putting the bayonet mount directly on the fan/filter also may have helped. The end result is a dramatic reduction in vibration that can be both felt and heard.

Changes have been enacted to make it more server friendly as well. A four drive SATA backplane has been added, a significant feature available on very few, high-end consumer cases. As drives can now be mounted individually without removing the entire drive cage, and the side panel no longer requires tools for removal, servicing hard drives is a breeze. Rather than a removable drive cage at the bottom to allow for a long graphics card option, the PC-Q18 allows up to three drives to be mounted along the length of the case floor, making them easier to access.

We have mixed feelings about some of the other adjustments. The case is narrower, reducing the CPU heatsink height clearance to about 76 mm by our measurements, though that’s still enough for such quality coolers as the Noctua NH-L12 (in single fan configuration) and Scythe Big Shuriken 2. The PSU intake vent on the side panel has been removed, possibly making the case somewhat quieter but robbing the power supply of a fresh air supply and forcing its fan to act against a down-blowing CPU fan. The motherboard was mounted directly on the right side panel of the PC-Q08, making it fairly secure while the PC-Q18 uses a somewhat flimsy removable motherboard tray, attached with only four screws.

We thought of the PC-Q08 somewhat as a jack of all trades mini-ITX case. The PC-Q18 is more specialized, with major refinements focused on achieving its potential as a file server first and foremost. Most of the changes have been made to make hard drive access quick and painless and they’ve succeeded masterfully. As the case is also substantially more expensive than the PC-Q08, getting your money’s worth is more dependent on making full use of its storage capabilities. It can fulfill other functions as well, but it’s a waste for housing a pure HTPC or compact gaming case with limited hard drive capacity. A home server or DIY NAS role is the forte of the PC-Q08

Our thanks to Lian Li for the PC-Q18 case sample.