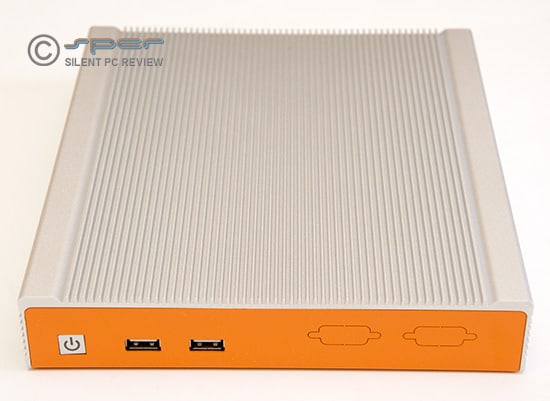 Improvements in both energy efficiency and computing power continue driving
PCs both smaller and quieter. The trend is omnipresent, and clearly impacts
the industrial and commercial markets as well as the more visible consumer segments.
Logic Supply has been a player in the industrial and commercial sector for many
years, with a heavy emphasis on small, fanless, silent PCs.

The model examined here is the ML210G-10, which employs a Bay Trail Celeron
embedded processor in a Thin Mini-ITX format to shrink the case even further.
The photos below show the lower profile of the new system against the earlier
ML400G-50.

Aside from a smaller case, the ML210G-10 also features even lower power consumption,
thanks to the Bay Trail processor, even with four cores, double that of the
ML400G-50. The same cheerful and distinctive orange-silver colour scheme is
followed here.

The maximum T-junction temperature of the Celeron J1900 processor is a sizzling
105°C, which partly explains Logic Supply’s confidence in the ability of
this passively cooled system to function safely in up to 55°C ambient temperature.

The ML210 series is available in two models. The ML210G-10 is the embedded
Bay Trail option. The ML210G-50 is a higher performance option in the same case
utilizing an Intel i5-4300U ULV (ultra low voltage) Haswell mobile processor
on a Thin Mini-ITX board.

As with the ML400G, an effort was made to open up the chassis, but the top
and bottom halves of the clamshell case did not want to part. Some form of clamping
is used to effect the heat transfer from the CPU to the processor; the details
of how this is achieved isn’t particularly important for our review. Our load
testing will quickly tell us the efficacy of the cooling system.

Our main test procedure involves recording various temperatures, fan speeds,
power consumption, and noise level, with the system in various states. This
includes idle, H.264 and Flash playback, video encoding with TMPGEnc, and full
CPU and GPU load using Prime95 and/or FurMark, as appropriate. This is followed
by a series of both CPU (timed tests of real-world applications) and GPU-centric
(gaming tests and synthetics) benchmarks. For the ML210G, the Furmark test,
an overkill 3D stress test, was ommitted as inappropriate; this system is not
meant to run 3D games.

The Logic Supply ML210G-10 barely sips at power and runs extremely cool even
under the highest loads.

None of the hardware monitoring utilities at our disposal fully identified
the Mitac PD10BI board within. Only the CPU and SSD temperature sensors showed.
The individual CPU core temperatures did show as well; none ever rose past 46°C
during our testing. It’s safe to say there is adequate cooling headroom even
in the hottest tropical summers.

As with the last Logic Supply fanless system, there is no need for any tables
or graphs showing acoustic performance: Our sample makes no noise of any kind.
This includes the AC/DC adapter. It is possible that the adapter may make some
noise at some point, but the level is low enough that we never noticed it, and
as you probably know we run an extremely quiet lab. (11 dBA in the anechoic
chamber.)

For CPU tests, we compared the ML210G-10 to a selection of lower-end, energy
efficient CPUs/APUs, the ultra-low voltage Ivy Bridge chip found in the original
Intel NUC, and the Pentium G2120, a 55W desktop CPU that is commonly paired
with thin mini-ITX LGA1155 motherboards.

The ML210G-10 is quite responsive, similar to the other Bay Trail Celeron system
we tested before, built around a Havey MITX-6771. In terms of benchmarks, it’s
not quite at the level of the i3 Intel NUC but close to an Athlon 5350 system.

We calculated the relative CPU performance score by giving each system/chip
a proportional score in each benchmark with each test having an equal weighting.
The scale is adjusted so that the Logic Supply ML210G-10 is the reference point
with a score of 100. By this metric, the Athlon 5350 and the Habey MITX-6771
systems are close matches.

The ML210G-10 is considerably more efficient than any mini-ITX board we’ve
tested thus far. Idle power is especially low, nearly matching the most power
efficient NUC at just 7W AC.

Under high loads, the ML210G-10 is a champ. To draw just 17W under a 3D game
(admittedly at low frame rate and detail setting) is quite a feat. The significant
2~4W edge it has over the other Bay Trail Celeron system may be explained party
by the fact that it is running Windows 8.1, reputed to provide improved energy
efficiency than Windows 7, especially with newer hardware. All the other systems
ran Windows 7 (64 bit).

The energy consumption of the Logic Supply ML210G-10 matches its diminutive
size. Under high loads, it is the most energy efficient PC we’ve reviewed —
in nearly 13 years of testing. In the industrial and commercial arena for which
it is designed, the sub-2 liter volume and absence of fans or vents which can
accumulate dust and hinder cooling in the long run are highly desirable attributes.
The ML210G-10 is well suited for the role, and its external casing provides
both excellent protection for the components within as well as irreproachable
cooling.

The performance doesn’t quite reach the levels of a discrete Core i3 system,
but its quad-core processor is certainly competent. The ideal role is in harsh
and demanding environments where dust resistance and absense of any need for
physical maintenance are boons. The inclusion of an SSD in the system is a natural
and logical choice. Logic Supply has created another worthy product in the ML210G-10.

Our thanks to Logic Supply for the ML210G-10 sample.