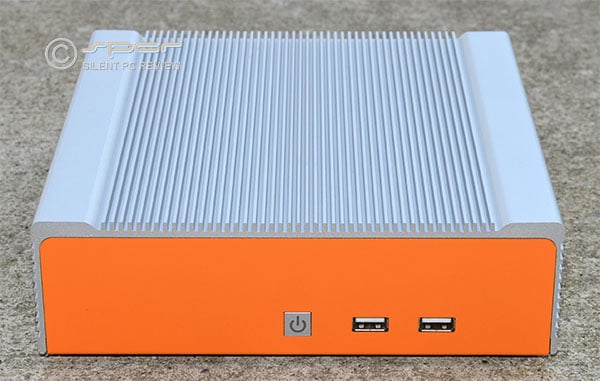 The latest in Logic Supply’s continuing efforts in the realm of Silent Computing is the ML400 series, which features mini-ITX boards in robust, fanless cases. A close look at the ML400G-50, based around a mobile 4200M chip in the ASRock IMB-180 motherboard.

While fanless PCs have been around for well over a decade, it’s only in recent
years that their full silent potential came to fruition with the descent of
solid state drive pricing into affordability. Logic Supply has been working
this sector for many years, with a signficant portion of their catalog devoted
to small, fanless, silent PCs, particularly for industrial and commerical use.
These systems are more powerful than ever before, despite their small size and
low power profile, thanks to improvements in CPU energy efficiency and sheer
computing power.

The latest of Logic Supply fanless system samples to arrive at SPCR is a mini-ITX
system sporting an Intel Core i5-4200M (Haswell) 2.5 GHz Processor, a middle-class
dual-core mobile processor launched in Q2 2013. The dimunitive 2.2 liter case
is the heatsink for the CPU; it siphons the heat to the all-aluminum cover for
convection cooling. The silver and bright orange may look familiar; it is the
same motif featured in the Logic
Supply ML300, a fanless NUC-based system.

The main advantage of a mobile processor is that it usually runs cooler than
a similar desktop part. The dual-core, hyperthreaded Intel Core i5-4200M has
a TDP of 37W, which is low, but not oustanding. The closest desktop comparables
in the Haswell lineup are Core i5-4570T and Core i5-4570TE, 2.9 and 2.7 GHz
variants of the same part, both rated at 35W. Interestingly, the volume price
on the 4200M is $225 while the prices of the 4570 desktop parts are lower, $192.
Admittedly, TDP isn’t the only factor that determines the cooling challenge
in a CPU. In Haswell and Ivy Bridge desktop CPUs, for example, the use of TIM
(instead of solder) between the heatspreader and the actual die has made them
run hotter than previous generations, despite similar TDP ratings. The mobile
4200M may be easier to cool because it doesn’t feature a heatspreader; the die
makes direct contact with the heatsink base, eliminating one layer of potential
thermal loss.

To use a mobile processor, the ASRock
IMB-180 board in this system is fitted with a rPGA947 socket. The ASRock
board is surprisingly full featured, with two gigabit LAN ports, 4x USB 3.0,
8x USB 2.0, and a full complement of 4x SATA3. Of course, there is room for
only one drive in the case, so all those extra SATA ports will remain buried
and unused.

Logic Supply says their customers come from a huge variety of industries. The
ML400 series offer a variety of partially or fully pre-configured solutions.
By pairing the new ML400 case with a variety of carefully selected motherboards
with varying IO and processing power, these pre-configured systems are intended
to provide feature sets apropos for their specific applications. The differences
among the models is summarized neatly by their descriptions on the
Logic Supply fanless systems listing:

Some customer examples from Logic Supply:

“A customer in the medical field seeking a system like this for a medical
cart: It’s a point-of-use application, so it needs to be quiet, manageable
with minimal servicing and still have some horsepower for things like image
capture and multipurpose graphic display.

“Some manufacturers need a PC that can stand up to the rigors of a shop
floor where dust and dirt, particulates and airborne contaminants can cripple
a system in no time. Because manufacturing equipment is so varied, the perfect
system for one client may not meet the needs of the next, so being able to
offer them a number of different configurations was important.

“We have spoken with radio stations for use in studio booths —
again because it’s silent and should require less servicing than a comparable
fanned system, but still capable of running their DJ software. Another customer
is looking to use this as a desktop replacement system in mall conference
rooms to run multiple screens and AV equipment, where noise would be a noticeable
distraction.”

“There was a time when storage capacity was a major contributor to customers
choosing an HDD over an SSD, but that gap is quickly closing. We still offer
HDDs because they can be cost-effective and do offer the greatest capacity
for applications that require it.

“That said, we always recommend a solid state storage solution partly
because hard drives are one of the most common things to fail, especially
in vibration-prone environments. If you’re going with a fully-sealed system
to maximize reliability in dust-prone or mobile installations, you’ll certainly
want to pair it up with an SSD or other solid state storage options (many
of which we touched on in a recent blog post). In terms of eliminating noise,
once you take the fan out of the equation, the next step toward creating a
silent system is to eliminate the spinning platters of an HDD. As SSD capacity
continues to grow and prices continue to fall, we’re seeing more and more
customers move to fully solid state systems.”

Are components running hotter in your fanless PCs, and does this mean
higher failure rates?

“The short answer is, “no”. We’ve spent years developing custom
cases designed specifically to protect internal components without the need
for fans. Fanned systems require vents, which puts internal components at
risk from dust, debris, airborne particulate and chemicals carried into the
case on the circulating air. These can clog fans and short components, negatively
impacting performance and causing frequent failures. Fanless systems aren’t
subject to these performance impacting factors. Fanless systems are far more
reliable than their fan-cooled counterparts when designed and implemented
properly.”

Do you anticipate more fanless/silent industrial PC sales, and if so,
are they pirating sales from other types of PCs?

“The price gap between fanless and fanned systems has shrunk dramatically.
Customers who previously purchased consumer desktop towers and experienced
their traditionally high failure rates are making the switch to fanless hardware.
Silent, fanless computing was once a luxury that only huge corporations could
afford, but now the average factory owner who’s struggled with clogged fans
and failing hardware, or the sound-sensitive client who had to make due with
noisy fans and drives, is moving to fully-sealed, solid state technology.
There will likely always be a market for fanned systems, but as form factors
continue to shrink and users continue to put computers in more and more extreme
environments, the fanless market will continue to expand in kind.”

Note that unlike the ML300 for NUC and ML200 for Thin mini-ITX, the ML400 chassis
is not available for purchase as a discrete component. (At least not now.)

I made an effort to open up the chassis, but after removing the 6 screws holding
the back IO panel, the two halves of the case did not want to part. A large
block of aluminum could be seen in the space between the CPU socket and the
top ribbed panel of the chassis. This was enough to tell us that some form of
clamping is used to effect the heat transfer. This is not rocket science, but
since the mechanical details were not clear, and I had no wish to break anything
(in case, for example, thermal glue was used) so I chose to close it back up.

Our main test procedure involves and recording the various temperatures and fan speeds, power consumption, and noise level, with the system in various states as we deemed appropriate. This includes idle, H.264 and Flash playback, video encoding with TMPGEnc, and full CPU and GPU load using Prime95/CPUBurn and FurMark. This is followed by a series of both CPU (timed tests of real-world applications) and GPU-centric (gaming tests and synthetics) benchmarks.

Windows 7 Ultimate was installed without issue on the ML400G-50 system. Certain
services and features like Superfetch and System Restore are disabled to prevent
them from affecting our results. We also make note if energy saving features
like Cool’n’Quiet and SpeedStep do not function properly.

The Logic Supply ML400G-50 drew modest amounts of power and ran warm, but cool
enough in normal use. Only under unlikely loads such as gaming and thermal stress
programs did the board and component temperatures approach higher risk levels.

There’s no need for any tables or graphs depicting acoustic performance: Our
sample made no noise of any kind at any time during testing. This includes the
AC/DC adapter. It is possible that the adapter may have made some noise at some
point, but the level was low enough that we never noticed it, and as you probably
know we run an extremely quiet lab. (11 dBA in the anechoic chamber.)

The energy demand of the ML400G-50 was compared to other system that run on
external DC power adapters. Despite its mobile processor, it was not the most
frugal system.

Performance is very good. The ML400G-50 betters all other mini PCs except for
the desktop i7-4770R equipped Gigabyte BRIX Pro.

The i5-4200M runs Intel HD Graphics 4600, but this is obviously not quite the
same as the desktop version of the same graphics chip as the comparison scores
below show. We suspect that this is due to the GPU clock speed, which didn’t
stay at its default 400 MHz through testing. According to Intel, it’s capable
of pushing to 1.15 GHz under optimal thermal conditions. Ultimately it performed
more like a last generation Intel integrated chip, so expect only marginal framerates
at low resolutions for gaming. As you’d expect, it is not a good fit for serious
gaming, but runs Photoshop and H.264 video and fine.

The Logic Supply ML400G-50 fulfills its promise of silent, competent computing
in a small minimalist package with a modest eco-footprint. Despite its bright,
attractive look, its true function is not in a living room but in the industrial
and commercial arena, as its legacy ports indicate. Everything about the package
suggests the ML400G-50 is well suited for the role, its external casing exuding
a confident air of long, robust productivity. The performance exceeds that of
any of the Intel NUCs and just about every mini-computer we’ve reviewed till
now. Certainly, as a general purpose corporate desktop PC, the ML400G-50 would
be more than up to the task, and the complete elimination of any noise producing
parts within would be a boon for most users. The ideal role, as Logic Supply
indicates however, is in more physically demanding environments where its dust
and grime resistance would eliminate concerns over maintenance and reliability.
The 80W >87% efficiency Seasonic power brick is a nice match, and although
this system does not set records for energy efficiency, its 21~49W typical AC
power draw range puts it well into the lowest power class for a PC of its capability.
All in all, Logic Supply has created a strong series of products in its ML400
line, and in this day of gargantuan corporate domination, we applaud the efforts
of this independent system integrator.

Our thanks to Logic Supply for the ML400G-50 sample.