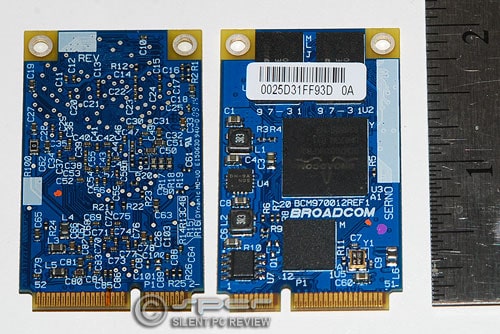 Logic Supply offers a Broadcom BCM970012 PCIe mini card that enables any Intel Atom system to play 1080p HD video. We give the card a compare/contrast before/after on a Intel D945GSEJT Atom board, and against two ready-made ION systems from Lenovo and Asus.

Logic Supply’s Broadcom
Hardware Decoder BCM970012 is an unusual product. It is a PCIe Mini Card that
provides video/audio hardware acceleration and enables support for H.264 and
VC-1 video decoding like playback of Blu-ray discs and streaming 1080p high
definition multimedia content. It is meant specifically for netbooks and nettops
that lack built-in support for HD video.

We’re talking about Atom-based systems running on the Intel chipsets, which
have taken the world by storm over the past couple of years. None of them really
have the ability to play HD video. The problem is lack of computing horsepower
in the CPU and the absence of hardware video decoding support in the chipset.

If you have an nVidia ION based Atom system, however, HD video/audio playback
is generally fine. HD video decoding support is the ION’s trump card over the
Intel chipsets for Atom. But if you have an Atom PC with an Intel chipset that
you’re thinking of replacing for a new machine capable of HD, Logic Supply’s
BCM970012 PCIe Mini Card could be just what’s needed to extend the useful life
of your netbook or nettop for another year or two. Many Atom netbooks, nettops
and devices have a mini PCIe slot. An add-on that extends PC life has got to
be worth examining for just the ecological benefit alone.

The device itself is tiny, measuring about 1"x2", it’s just a little
PCB, like most devices that plug into a PCIe Mini slot.

The main chip on the device is a Crystal HD decoder BCM970012. Here is Broadcom’s
description:

It all sounds good. The key question is whether it works, and how well. That’s
what we’re here to find out.

The test platform is the Intel
D945GSEJT, the first Atom-embedded mini-ITX board from Intel to feature
the mobile 945GSE Express Chipset, which we reviewed last October. It
came with a fanlessly cooled Morex case designed specifically for this board.
The system proved to have the lowest power consumption of any PC we’ve tested,
other than netbooks. However, in stock form, the D945GSEJT board cannot do 1080p
video; most 720p video is also a stretch.

A comparison was made of the AC power consumption, video playback performance
and CPU load of the original D945GSEJT system, the D945GSEJT system with Logic
Supply’s BCM70012 card, and the ION based Lenovo
Q110, which also uses a single-core Atom processor.

CoreAVC, a not-free software hardware video accelerator, can be used
for HD video playback when there is enough CPU power; this means at least a
dual-core Atom. Data from our review of the dual-core Atom Asus
EeeBox EB1501 ION Mini-PC is also shown. The ION’s CUDA hardware acceleration
was turned off so that the dual-core Atom’s HD capability can be seen. The various
systems were not configured identically, so there may be some minor difference
in results if all the hardware was kept more consistent.

Logic Supply’s product
page states, "This product requires software that is able to utilize
DirectShow Filters. Currently, Cyberlink PowerDVD and Arcsoft Total Media Theater
allow Blu-ray playback; Media Player Classic is a free player that is compatible
with most other formats." Links for all of the software are provided.

Installation of the drivers was trouble-free. Both Media Player Classic and
Arcsoft Total Media Theater were tried and found to support the BCM970012 card.
TMT seemed to provide slightly lower CPU loads on most of the media clips. The
free version linked at Logic Supply was the player used in the Intel D945GSEJT
system.

The performance of the D945GSEJT system with the Broadcom Crystal HD decoder
is compelling:

So does this mean every Intel Atom system owner should rush out and get one
of these Broadcom Crystal HD PCIe Mini cards? Well, if lack of HD video capability
is their main quibble, this is a an excellent solution. It’s an upgrade that
actually makes sense, from a financial as well as an ecological point of view.
This chip is useful for the new Pineview generation Atom CPU/boards, as they
still do not feature hardware viewo acceleration. Our review of the new dual-core
Intel D510M0 showed fairly high CPU loads when playing HD video, which
was realistically possible only with CoreAVC. The Broadcom Crystal HD decoder
would ease the load and possible decrease power consumption.

If you haven’t got into a netbook or nettop yet, and you’re interested in doing
so sometime this year, it might be worth waiting a bit to see whether nVidia
ION 2 is more energy efficient or otherwise better than the original. The ION
chip also allows the Atom to be used for light (maybe very light) gaming;
the Broadcom chip effects no such transformation.

Logic
Supply’s Broadcom Hardware Decoder BCM970012 PCIe Mini Card is currently
selling for $59, and SPCR readers can now take advantage of a $10 discount with
the coupon code "SPCR10" whether purchased by itself or as
part of the SolidLogic
Johnstown T-1610 Mini-ITX System.

Some readers may be aware that this is not the only PCIe mini card of its kind
out there. Similar boards can be found on ebay for under $25. Support and reliability
for these sources is not anything like what Logic Supply offers as a bonafide
US dealer/distributor, however. A visit to any of the Logic Supply links in
this article will show you what we mean. You pays your monies, you takes your
chances.

Our thanks to Logic Supply for the sample.