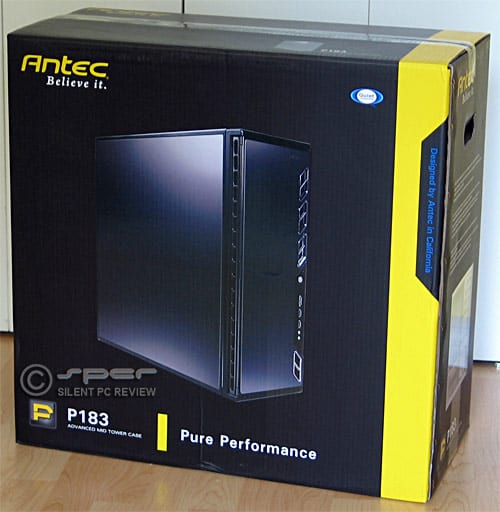 A pair of small form factor cases, from Cooler Master and a lesser known brand called SEED, are the latest to pass through SPCR’s test labs. Can either drive an ION-powered system without offending our sensitive hearing?

In the current environment, small and thin
PCs and PC cases are increasingly popular, mirroring the growth in compact/slim netbooks
and ultra-portable laptops. We’ve already seen big case brands like Thermaltake
and Antec join the fray
looking to carve themselves a piece of what was once was a niche market. Today
we’ll be looking at a pair of small form factor cases from Cooler Master, and
a lesser known entity known as SEED.

From an acoustic/thermal standpoint, these slim cases are really only suitable for
integrated Atom
and ION-powered systems, rather than those with "proper" desktop processors.
The limited height makes the use of conventional quiet CPU coolers impossible.
Some cases in this class also have rather small power supplies — an AMD
X2 or Intel Core 2 system’s energy requirements may come close to or exceed
what is available. As such, our test board will be the Zotac
IONITX-A.

The two cases examined in this review differ somewhat in approach and size. The Cooler Master Elite 100 is designed to accommodate both mini-ITX and micro-ATX motherboards, and thus has a much larger footprint than the SEED MA-280, which is only for a low power mini-ITX board. A quick comparison of the relative size of cases and systems we’ve reviewed is worthwhile.

SEED is a brand backed by Lutec
Co., Ltd, a major Taiwanese hardware distributor. SEED stands for their
four mottos: "Saving Environment, Energy Efficiency, Eco-friendly
and Direct Client Service." Not only does the acronym shorten their verboseness,
it also evokes a green, organic sentiment. At the moment, SEED offers a small
handful of cases, power supplies and other accessories.

The SEED MA-280B is just 2.8 liters, and looks it, with a tiny footprint and
an elegant appearance. As the size comparison table above shows, it’s about the smallest retail case available today. The panels are sturdy, composed of 0.8mm SECC steel that is nickel-plated for a nice shine. To save space and reduce noise, power
is delivered with a DC-to-DC unit with a 60W external AC power brick. The front
bezel looks modest but attractive with a glossy black panel and a silver belt
running around the middle.

Without any visual references for comparison, the MA-280 could be mistaken for a much larger case. An old style VCR comes to mind.

Because it’s so small, there aren’t many options, and "assembly" is a relatively simple process.

System temperatures and noise levels were recorded with SpeedFan at load using
Prime95 to stress the CPU and FurMark with the Xtreme Burn option (if possible)
to stress the GPU.

We found it curious that the case would have a 40mm fan to cool the power supply,
as typically DC-to-DC boards do not require active cooling. This implies that
the power supply’s efficiency may be poor. As such, we thought it would be fitting
to put it through a quick run on our power
supply testing rig.

Our testing shows that the unit’s efficiency is definitely lower than expected,
about 73% at 21W load and 75% at 56W load. By comparison, a picoPSU with
an 80W AC power brick runs almost 80% efficient at 22W and 85%
at 65W and above. Not only is the stock power supply less efficient,
the +12V rail took a steep nose dive to 11.10V on high load. The PCB components
did get a little hot during testing, so it seems the inclusion of a fan was
an apt move on SEED’s part, though it would have been smarter to simply use
a more efficient PSU.

SEED claims an SPL of 14 dBA@1m for the included fan. We did not test the fan by itself in open air, but found that it was fairly smooth sounding, and it has a benign acoustic character, lacking
the tonality of the majority of fans in its class.

At one meter distance, with only the hard drive generating noise,
the SPL measured 17 dBA. With the fan on running at 10V, the SPL increased by 3 dBA.
At full speed, the noise increase was an additional 3~4 dBA.

The MA-280B had no problems cooling our Zotac ION board when idle with CPU/GPU
temperatures in the low 70’s. When a CPU load was applied using Prime95, the
Core temperature leveled off at just under 100°C while the GPU was a balmy
87°C. However the system remained stable with Prime95 plugging away for
20+ minutes.

The system was stable initially when we added FurMark as a GPU load, but after
15 minutes the GPU overheated after reaching 94°C, causing the application
to crash. The processor remained stable as far as we could tell but the Core
temperature sensors went haywire after it exceeded 100°C. FurMark pushes
GPUs further than most games, but it’s clear that if ION is truly pushed with
3D applications, a fan of some sort is highly recommended.

The IONITX-A does come with an optional fan for the CPU/chipset heatsink, but
we could not use it due to lack of vertical clearance. The hard drive is directly
above the cooler and it presses down on the fan, preventing it from spinning.
The case’s only fan didn’t make any difference due to its size, speed, and location
— turning it on did not help, it only generated more noise. A fan on the right
side next to the vent may help, but it would be hard to find a quiet one that
would fit.

We can’t recommend using this case with an ION system, unless it was strictly
for 2D use. Intel’s Atom boards have chipset fans so they will be right at home
inside the MA-280B, but at the cost of extra noise.

Cooler Master requires no introduction. The massive manufacturer out of Taiwan
has a significant presence in various markets such as cases, power supplies,
and cooling products. They don’t just sell retail products either — they are
a major OEM for various companies.

Their Elite 100 case is a slim enclosure with an utilitarian aesthetic, as
evidenced by the ugly metal plate sitting on top which is designed to hook the
case onto a VESA mount. Even with the mounting piece removed, it still has a
rather plain appearance thanks to the exterior matte finish and the lack of
a stealthed optical drive bay cover. While thin , its footprint is rather large
as it supports both mini-ITX and microATX motherboards and it’s quite deep due
to the presence of an internal FlexATX power supply. Such PSUs usually offer
plenty of power, but are also poor when it comes to acoustics. When you add
all these details up, it seems the Elite 100 is suited more for an office environment
rather than at home.

No matter what angle you approach it from, the Elite 100 simply can’t be described as handsome. It looks and feels pedestrian.

As the power supply had a fan, we powered it on inside the case to get a baseline
noise measurement. Over the years, we’ve generally found FlexATX form factor power supplies to be noisy beasts. The PSU in the Elite 100 did not disappoint; it greeted us with one of the most annoying noises we’ve
encountered in recent memory.

The fan had severe tonal properties, with multiple peaks through the audible
range as seen in our spectral analysis. After being on for 10 minutes
without a load, the noise level measured 24 dBA@1m and 28 dBA@0.6m. These measurements
do not do the power supply fan justice — subjectively it was a lot worse than
the measured SPL would indicate, droning like nobody’s business. Ultimately
we decided the Elite 100 was simply not worth testing any further. Its baseline noise level
is terrible even without a load — with a system that actually requires power,
it could only get worse.

The SEED MA-280B is well-built and its sleek appearance makes it an attractive
addition to a home theater. However, it seems to be designed specifically for
the Atom boards produced by Intel. The I/O shield cutout is tailored for the
Intel D945GCLF/2, although 60W of power is much more than what Atom requires. The Intel Atom boards
have loud fans but they can be tempered with fan control, so a reasonably quiet
system is definitely possible with such a configuration. Unfortunately, they
don’t make great HTPCs due to their underperforming hardware and lack of features.

Our attempt to use a Zotac IONITX
board with the MA-280B ultimately failed due to the lack of a fan which seems
to be a necessity to keep the GPU cool when under heavy stress. The fan for
the CPU/chipset heatsink could not be installed due to interference from the
hard drive and the case has no fan option aside from the 40mm one for the power
supply (which has no impact on system temperatures). Using an ION configuration
would heat up the box quite a lot and you would have to restrict yourself to
2D operation unless the case were modified to improve cooling.

The Cooler Master Elite 100 seems to be an industrial product — it is well-constructed,
but its appearance is underwhelming and it has a large footprint. Its much bigger footprint is
a direct result of support for microATX boards and to accommodate the included
FlexATX power supply, which single-handedly tanked the product in our view.
The noise from the power supply fan, even without a load, was just plain nasty
— bad enough to forgo testing altogether. FlexATX power supplies are typically
not the greatest acoustically, but this one was particularly bad. Replacing
it with a picoPSU is obviously an option, but you could just as easily purchase
a different, smaller case and save yourself the trouble.

The Elite 100’s microATX support is a curious choice — it extends the
footprint of case significantly and given the power supply’s location, none
of the extra expansion slots afforded by the microATX form factor can be utilized.
That leaves the microATX option only one advantage: price. Comparable mini-ITX
boards are much more expensive than their microATX brethren. That would mean
you would have to use a desktop processor though, which would be difficult to
cool quietly in the Elite 100 due to the height restriction — the case
is just tall enough for a low profile Intel stock cooler. However, if you use
the stock power supply, a loud stock CPU cooler would be your second worse problem.

Our thanks to SEED
and Cooler
Master for the MA-280B and Elite 100 case samples.