A new contributor reports on his efforts to determine the efficacy of the Borg 6mm HES (Heatpipe Extension Set) by mCubed, designed for use in their passive home theather PC cases. The author’s aim is to design a secondary backup system to aid a 1U HSF in cooling the CPU in an extremely low profile media PC case. He created a testing rig that’s worthy of the SPCR lab, one that allows the thermal loss factor of this heatpipe system to be easily seen. The results are applicable mostly to the mCube heatpipes and mounting system but also gives insight into the kind of results that can be expected from DIY heatpipe setups.

This article was written after I became interested in ways to transport heat around SFF (small form factor) and slim cases.

My current project is a HTPC using the slimmest case I can find. At this time, the lowest profile case on the market is the Hiper Group media case, which is a mere 55mm in height! Hiper will be releasing a new version soon, and it is this media case that I have my eye on. While waiting, and after reading reviews of the current Hiper case, I decided to look into ways to augment the cooling of the 1U CPU HSF (heatsink fan) supplied as an accessory with the Hiper Media case.

Editor’s Note: The author awaits the release of the Hiper HMC-2x53x.

Today’s CPU air-cooling systems almost always use heatpipes to transport heat away from the CPU, normally into the case where it can be vented outside. Deciding this would be an effective mechanism to investigate further, I sourced some heatpipes to try them in various configurations. In scouring the Net for a source of heatpipes, I came across the mCubed Borg passive case heatsink system. Figuring I had time before the new Hiper case became available, I embarked on testing the effectiveness of the Borg system and perhaps making modifications/additions to incorporate it into a slim HTPC system.

The following is a pictorial rambling of my efforts to test and design a slim HSF heatpipe CPU cooling system.

The first thing I needed was a test-bed. It had to include a heat-source (CPU Simulator) and method of measuring "CPU" temperature. So I made a CPU Simulator around a 100Watt, 2.2 ohm aluminium-encased resistor. I mounted it in a length of aluminium channel and encapsulated it in an epoxy potting-resin (photo is pre-potting). 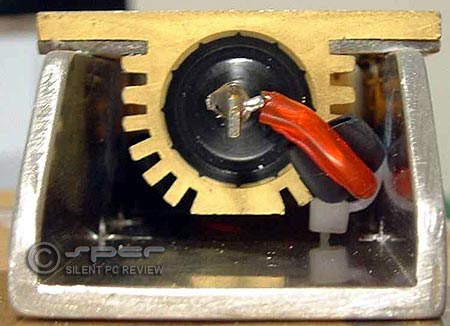 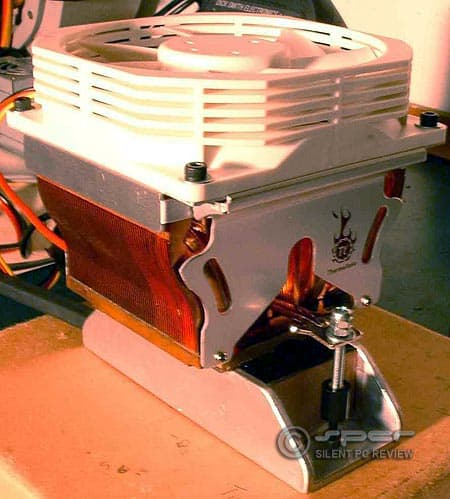 M3 screws to attach the CPU-Simulator to a HSF, in this case a Thermaltake Pipe101.

I also encapsulated a NTC-resistor to enable temperatures to be monitored. This NTC-resistor was mounted in the centre of the rig, which meant it measures the highest possible temps. I also soldered in a feedback cable so the voltage across the resistor could be measured here rather than at the PSU to avoid any potential voltage drop. [Editor’s Note: A Negative Temperature Coefficient (NTC) resistor is a temperature-dependent resistor, commonly called thermistor, with a negative temperature coefficient. When the temperature rises, the resistance of the NTC resistor drops. They are often used in temperature detectors and measuring instruments.]

To make the CPU-Simulator useful I needed to make a test-bed. This was done using a laminated board, multimeter, PC PSU and cabling.

I wired the HS fan to a switch, enabling easy selection of 5V or 12V fan voltage. This meant I could test various configurations with different cooling capacities.

Now that I had a test-bed, I set about making measurements using the Thermaltake Pipe101 as the reference HSF. These would become the reference values for comparing the heatpipe results against.

The values in the right columns are the most important, as they are the temperature rise above ambient and the resulting calculated cooling capacity (°C/Watt). As can be seen, with the fan at 12V we have a temperature rise of 13.5 °C, and a rise of 24.5°C with the fan at 5V. So with these reference temps I now had something to compare the effectiveness of the Borg heatpipes against. 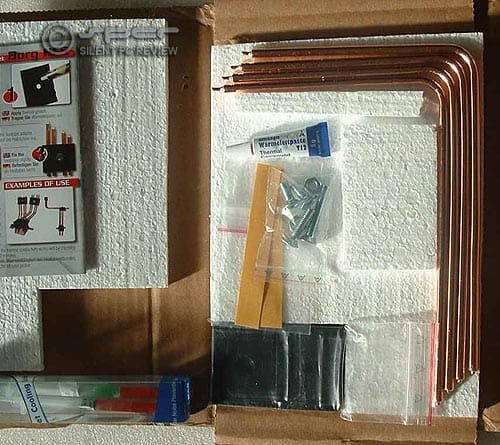 It was now time to configure the test-bed to utilise these mCubed Borg heatpipes. I added another mount system using aluminium channel. The channel was cut and drilled to function as a bracket to hold the plates against the heat/cooling sources. To insulate the plates from the channel I used cardboard squares, quite remarkably these proved to be very effective insulators (the brackets did not heat-up at all). 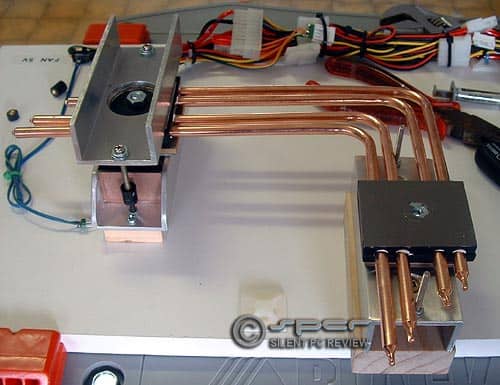 mCubed heatpipes set up with heating and cooling blocks (evaporator and condensor).

And then the HSF was bolted on tightly, completing this configuration: 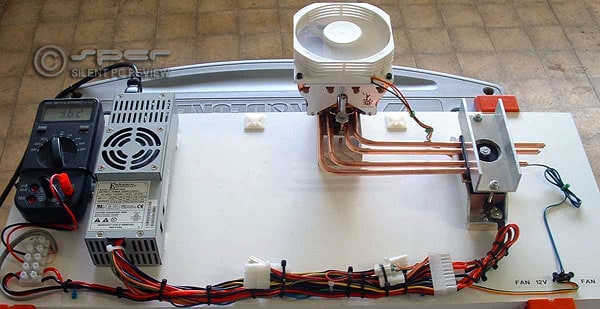 The Thermaltake HSF was used again.

I again ran the same tests as before. This time the heat would be removed from the CPU Simulator via the heatpipes, then dissipated into the air by the Thermaltake HSF as before. In essence, the only real change is the addition of the heatpipes in the heat transfer path, although it is far from perfect; there are small unavoidable losses in the interfaces at both the evaporator (where the CPU heat evaporates the coolant in the heatpipes) and at the condenser (where the HSF condenses the coolant back into liquid form).

In comparing the results between direct HSF cooling and heatpipe-coupled HSF cooling, there is degradation of 13.5 °C for the HSF in high cooling mode (fan at 12V) and 12.5°C with the HSF in silent mode (fan at 5V). This drop in performance was greater than I expected. Perhaps there was too much thermal loss in the mechanical interfaces between the pipes and the blocks? Just to double check, I reassembled the plates, heatpipes and HSF and ran the test again, but there was no change.

At this point, I wondered what the effect of less power would be. As can be seen in the table above, with the CPU simulator at 11W, the heatpipes easily transport almost all the heat to the HSF.

mCubed claims that with the Borg system, "4 heatpipes can transport up to 120W to the heatsink". Although my four-heatpipe test results suggested the heatpipes were near capacity, this spec indicated that two heatpipes could actually carry the test-rig’s 59W. To test this, I removed the two outer heatpipes and retested. Here is a photo of the new configuration: 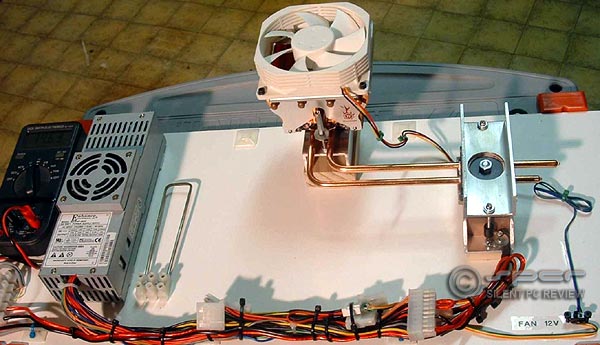 The temperature kep climbing past 80°C
with the HSF at 12V at 59W heat load. There was no point in testing cooling performance with the HSF at 5V. I also tested with reduced CPU-Simulator power (by reducing the source voltage to 5V). It’s pretty obvious that a two-heatpipe configuration is not up to moving ~60Watts efficiently. I would estimate from these results that the two-heatpipe configuration is good for 40W maximum. *(See Final Editor’s Note below.)

From my experience in working with and testing the Borg Heatpipes, I came to the following conclusions: 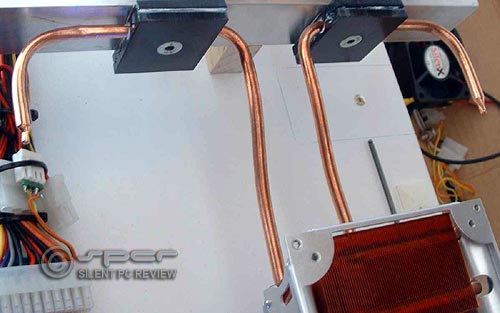 The extra bend had absolutely no effect on the efficiency of either heatpipe’s heat transport.

When thinking about heat transfer, it’s useful to consider thermal pathways, points of constriction, and the speed of heat transfer. The fact is that a heatpipe or any thermally conductive path can transfer even thousands of watts — if the pathway is narrow, it will just take longer, much like dial-up versus DSL. This is a key point. If the heat is transferred too slowly, then it will build up at the source and cause temperature rise at the source, in this case, in the CPU. If the heat builds up too much, the CPU will overheat. So mCube’s assurance that their 4-heatpipe system will transfer up to 120W is rather misleading, because it’s subject to what happens outside the heatpipe and probably applicable only in the context of their own cases.

From a practical standpoint, there are several issues around the use of heatpipes to cool a CPU:

The author’s conclusion about keeping the thermal load to 15W per pipe still seems prudent. DIY PC silencers should generally exercise a bit of caution about cooling.

Other SPCR articles of related interest