Mediasonic is a small Canadian outfit specializing in storage devices and accessories. They’re primarily known for their multi-bay enclosures that allow consumers to augment their PC with extra storage in external form. Today we’re going to take a look at one of their more popular products, the ProBox HF2-SU3S2, a 4-bay enclosure with both USB 3.0 and eSATA interfaces, active cooling with fan control, and syncing features that allow it to power on/off with the system it’s connected to.

The ProBox moniker is applied liberally to a variety of Mediasonic’s wares including the HFD1-SU3S2 4-bay dock, and the monstrous H82-SU3S2 8-bay enclosure. The ProBox HF2-SU3S2 is only a 4-bay device but being a simple enclosure, it lacks the physical girth of NAS systems and full-fledged servers, as well as the attention from the media. The ProBox is a humble device by comparison, lacking an operating system, network connectivity, or even RAID functions (check out the ProRaid series if RAID capability is required). It is just a USB/eSATA connected local storage extension.

The ProBox is quite compact, only 16.6 cm tall, equivalent to about seven stacked desktop hard drives. A small grill under the bezel allows air to pass through the drives to an 80 mm fan at the back. The fan can be run on automatic, tied to a thermal sensor inside, or set to one of three speeds, via a front panel control. Other controls allow you to switch the interface between USB 3.0 and eSATA, and change the sync mode that dictates whether it will shut down, go to sleep, or remain active if the PC it is connected to powers down. The sleep function also wakes up the drives if the system turns back on. It’s a simple device but it’s anything but dumb.

The ProBox HF2-SU3S2 ships in a dark cardboard box with a convenient plastic carrying handle. Included in the package is the enclosure well protected with foam padding, a brief instruction sheet, USB 3.0 and eSATA cables, the power adapter and cable, and four handles with screws.

Most of the noise from the ProBox is caused by its cooling system, an 80 mm rear exhaust fan, rather than the Seagate NAS HDD 4TB‘s we used for testing. The fan runs fast, probably to compensate for all the airflow blocked by the controller board inside. There are three manual settings (low, medium, and high) as well as an automatic option, though during our testing, the drives never got hot enough to cause it to spin past the low setting.

The drives on their own inside the enclosure generated a SPL of 20~21 dBA@1m (the fan cannot be turned off — we manually disabled it by jamming it) with a limited level of vibration passed onto the rest of the enclosure. The drives are braced fairly well by the metal grate inside and the external door, though loose, thankfully didn’t rattle. The NAS HDD’s are relatively quiet models and there’s nothing in the enclosure’s design to make them sound worse.

At low speed, the fan had a soft, smooth sound except for some broad clicking noises audible close up. It’s not the best sounding fan in the world but it certainly helps being buried at the back of the enclosure behind hard drives. It’s moderately loud, producing 27 dBA@1m, so it would easily drown out a typical modern four hard drive configuration. The fan gets noticeably louder at medium and high, with the tone increasing with its speed, though the clicking becomes less noticeable. 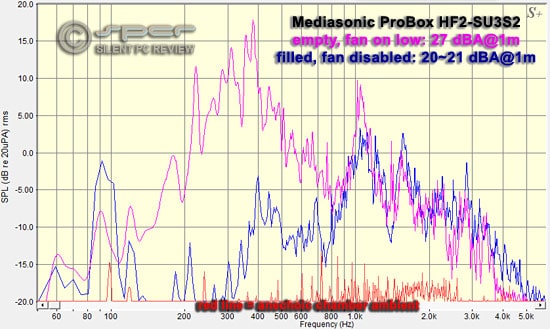 Compared to the drives alone, the fan outputs considerably more noise in the 150~800 Hz range.

When turned without any drives, the ProBox pulled only 5W from the wall. The AC power draw increased by 5W for each drive we installed. This indicates the power adapter is fairly efficient as we previously pegged the power consumption of the Seagate NAS HDD 4TB at 4.8W idle. After sitting for half an hour (more than enough for HDD temperatures to stabilize), the drives were running at a cool 30~33°C. Even though the fan is mostly blocked off, it nevertheless managed to do its job.

The ProBox has two sync modes that can be used to either turn the enclosure off or put it into sleep about 15 seconds after the PC it’s connected to is shut down. The sleep function also wakes the drives up when the PC turns back on but we were only able to get this to work with eSATA, not USB 3.0. With USB, it shut down with the system just fine, but when put to sleep, it stayed asleep, requiring power cycling to get the drives back online.

To gauge the overall performance of the ProBox we used a synthetic benchmark, CrystalDiskMark, which tests both sequential and random performance with two different block sizes. We also performed some timed file copy tests (the same used in our hard drive test methodology), a small file test consisting of a variety of small HTML, JPEG, MP3, ZIP, and EXE files, and a large file test consisting of four AVI files, 2 x 700MB and 2 x 1400MB in size.

The copy tests were conducted between two of our Seagate NAS HDD 4TB’s placed in three different configurations:

Our file copy tests tell a different story. With our reference point being the completely internal PC to PC result via SATA 6 Gbps, it’s clear that parity is only attained when the ProBox is reading. It was slower when being written to, particularly with small sets of data. The small file copy test result took 35% longer writing compared to reading. Transferring data between two drives within the ProBox itself was slower still, this time with a dramatic reduction in large file transfer performance.

When used as a repository for large files, it seems that a mechanical hard drive mounted in ProBox offers virtually the same level of performance as it would deliver connected internally. Small files take longer to copy over but once it’s on there, retrieval isn’t affected by any deficiencies with the USB 3.0 interface.

The Mediasonic ProBox HF2-SU3S2 is a simple product that gives users a sizable backup or storage expansion solution. It’s not network-capable and lacks redundancy options but at this price-point we certainly can’t complain. Despite its rather generic nature, it has a couple of surprising extra features you wouldn’t expect to see in such a rudimentary device. The ability to turn off with the PC it’s connected to and the sleep/wake function are incredibly convenient, though wake only works properly with eSATA. The fan control modes are a nice bonus but are ultimately unnecessary — the low setting alone provides more than enough cooling.

The fan doesn’t sound too bad in relation to four mechanical hard drives revved up inside, but it’s fairly loud, to the point that it can become distracting if left on for more than a short period of time. It’s something you would put on the floor under the desk rather on top next to your monitor. Not only does the fan spin faster than necessary, the cooling design is flawed in that the circuit board is positioned directly in front of the fan, blocking off much of the airflow. This seems to be the convention for these types of enclosures but a larger fan attached to the side or blowing up from the floor would be preferable. Its only other notable issue is poor write performance with small files but if you’re mostly going to be storing large files you can expect full speed.

We can’t deny the value proposition Mediasonic is offering. The ProBox HF2-SU3S2 is selling for approximately US$100, making it one of the more affordable 4-bay enclosures on the market. That alone would put in contention but with the extra features, and you have a compelling product.

Our thanks to Mediasonic
for the ProBox HF2-SU3S2 case sample.