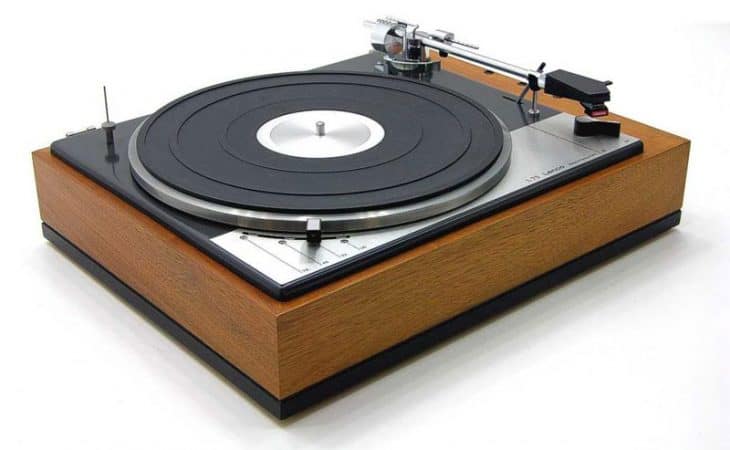 Most SPCR regulars know that my fascination with everything aural, both music and sound, predates this web site by… a lifetime! This section is meant to showcase the work in audio restoration, design and construction that’s becoming increasingly important to me. This article is an intro, and a quick summary & photos of my fourth re-made turntable, the Blond BB Lenco.

Most SPCR regulars know that my fascination with everything aural, both music
and sound, predates this web site by… a lifetime! lol! Computers came into
my “audio consciousness” when I inherited an AT286 clone that had been used
for inventory and accounting in the small high end service-oriented audio store
I partly owned in the ’80s. The beastly PC which needed to be stuffed in a cabinet
surrounded by mounds of foam to restrain to a dull roar, became the platform
to run the very first iterations of LEAP (Loudspeaker Enclosure Analysis Program)
in DOS, the very first DIY or consumer realization of complete loudspeaker system
simulation and design, including the all essential crossovers. For a few years,
I designed and built custom speaker systems for a select group of customers
who followed me from the store I used to run. LEAP lives on today, expanded
exponentially into a full range of professional tools for loudspeaker measurement,
analysis and design. (LinearX)

By then, I’d worked in audio hifi retail for upwards of 10 years, on and off,
starting with a mid-70s stint with Atlantis Sound, an East Coast chain store,
while a university student at Worcester Polytechnic Institute in Massachusetts,
and another run at the Sound Room in Vancouver in the early ’80s. But you could
say my obsession with audio gear goes all the way back to the ’60s, to the 6-foot
wide German Nordmende stereo console with glowing tubes & and a Dual stacking
turntable that my father bought LPs of Julie London, Elvis Presley, Nat King
Cole, and Boston Pops Symphony to play on, along with a mix of Korean and Japanese
music. Those were heady days for a wide-eyed Korean boy from the grim city that
was Seoul back then. My father’s transfer to head a new national shipping company
branch office was, for the whole family, a move to paradise: Singapore was a
rich, verdant Eden, replete with all the grandeur of British colonialism, the
exotic and bewildering mix of culture, food and language — official TV
news was repeated in four languages: British English, Malay, Hindi, and Chinese
— whether Taechew or Hokkien, I don’t recall. And a standard of living
far above what we left behind in Korea, still recovering from four decades of
repressive Japanese colonization and a brutal civil war.

So I’d been exploring music, sound, and audio gear for decades when the noisy
computers in my tech writing home office prompted me to silence them and launch
SPCR. You could say SPCR was never destined to be much more than a side trip
in my aural journey through life, so it is surprising that it’s lasted as long
as it has. Nearly 14 years now. No surprise, then, that my interests in audio
and computers have merged, or that my life-long, hands-on approach has taken
me back to audio gear in the last couple of years.

This section that I’ve hastily named MikeC’s Audio Craft, is to showcase the
work that’s becoming increasingly important to me, and to those who have tasted
the fruits of my labor. I know that many SPCR visitors also happen to be interested
in music reproduction, mostly using computers to achieve their aims, although
not closed to the technologies of the past. I’d like to share my work, thoughts
& observations on that scene with you.

Lencos were considered also-rans behind other top turntable brands when they
were current in the 60s and 70s. It wasn’t until Jean
Nantais made public his experimental finding to the world via the web in
the early-2000s that a revival of Lencos began and soon turned viral! The key
to making a Lenco sing is to tweak its ingenious, deceptively simple yet robust,
idler wheel drive system to do its very best in providing a stable rotation
utterly unaffected by stylus-groove drag in a plinth impervious to vibration,
and equip it with a tonearm and cartridge capable of extracting all the signal
from the stable spinning groove. There are now many commercial operators that
offer such restored, rebuilt… nay, re-manufactured Lenco turntables,
often for many thousands of dollars. Including Jean Natais, of course.

I caught the Lenco bug in 2013. I had sold Linn LP12 belt turntables, often
touted as the most successful high end turntable ever, and owned a pretty nice
version with their top tonearm, a first generation Ekos. I sold the whole thing
off to generate a starter fund for my Lenco projects. The money also help to
round out my garage workshop with a few more tools I felt were critical to the
task. I wasn’t listening to LPs much any more then, so I didn’t feel I’d miss
the Linn. Over the better part of a year, I managed to acquire a half dozen
Lencos, L75, L70, L76 and L78s, in a variety of conditions. Most were far from
pristine. I studied them for months, experimenting, reading and researching
all along, then I started building.

I call this one the Blond BB Lenco because it looks Scandinavian, its core
is from a 1975 Lenco, and the plinth is made of five layers of 3/4" Baltic
Birch plywood. This is a super high quality sheet wood product that bears no
resemblance to most plywoods. It comes from Russia mostly in 5×5′ panels, a
most awkward shape for transport if you don’t have a pickup truck. I also built
the tonearm, no not from scratch, but from a kit offered by AudioMods.
You do need a decently equipped workshop and good handy skills to assemble the
kit, though; it’s no Ikea. This is an amazing precision product, lovingly hand
crafted by what I believe is a one-man operation in the UK. The highest value
product in high end analog audio today.

The finish on the wood is what I have determined after long experimentation
to be the best for wood products that get frequent close scrutiny like a turntable:
Many coats of pure Tung oil, properly applied, then buffed to a sheen with several
applications of beeswax! It is lovely to touch and behold. Acrylic and
other heavier finishes don’t come close to the sheer tactile beauty of this
finish; they are coarse and hide too much of the wood’s natural beauty. (A mirror-like
piano finish is amazing, of course, but that requires tools and skills I don’t
have.) This is the fourth turntable I restored or rebuilt, one of my most satisfying.
Virtually every part in the original Lenco was replaced or improved; there’s
no question it is a far better performer than any original Lenco. My friend
Mike Lee, an electronics engineer, is very happy with his BBBL, and he is using
it with an outboard speed controller that he designed and built himself, based
around a Wein bridge circuit.

That’s all I have the time and energy for today. I’ll be back soon with more
turntable, loudspeaker and even amplifier stories. Adieu!

Discuss this article in the
SPCR forums