The current flagships of WD’s and Seagate’s 2.5″ notebook drives go head to head in our review. 5400RPM, 500GB on two little platters with areal density at nearly 400 GB/inch: What performance and noise do the Momentus 5400.6 500 and Scorpio Blue 500 offer?

In the 15 months since our last review of a 2.5" notebook drive, they more than doubled in capacity, dropped signicantly in price, and moved entirely to the SATA interface. Their use in small desktops is now much more common, so SPCR is no longer alone in encouraging such use. The era of nettops is on us, and 2.5" notebook drives are frequently used in place of standard 3.5" desktop drives for their smaller footprint and lower power/heat disspation. Since they are usually quieter than 3.5" desktop drives, this is a good trend for noise-conscious computer users (although as our review of the Dell Studio Hybrid mini PC showed, how a 2.5" drive is mounted in the chassis has a substantial impact on propagated noise).

The two 500GB 2.5" drives under review here are the current capacity flagships of the respective brands, Seagate and Western Digital. Samsung and Hitachi reached 500GB capacity a little sooner, but they did so with 3-platter designs. With Hitachi, this resulted a physically thicker 12.5mm drive rather than the standard 9.5mm. The latter dimension is necessary for a drive to fit into a standard notebook.

The half-terabyte capacity on the Seagate and WD drives is achieved with just two platters, so both drives adhere to the standard notebook drive form factor. The areal density is 394 GB per square inch, according to Seagate. Given the much smaller platter size, this is probably at least as high as the 375 GB/platter achieved in their 1.5 TB 4-platter 3.5" desktop 7200.11. Refinements in perpendicular recording helps achieve such high density. These 2-platter designs provide several advantages over the 3-platter competition:

We’ll examine each drive in turn, then compare and contrast the two. 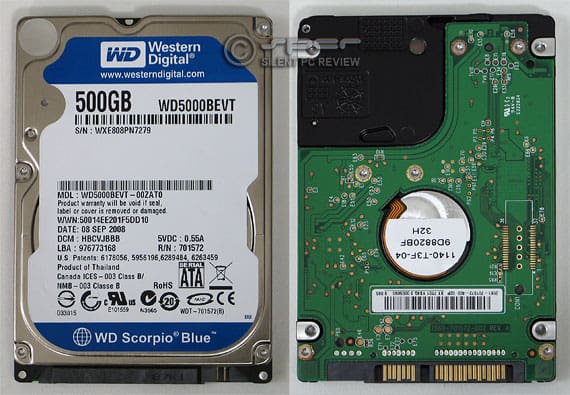 
The specifications of the particular drives are compared below. There isn’t a lot to differentiate them, and the most important parameters — transfer rate and acoustics — are cited differently, so a quick comparison is not simple. The difference in the acoustic specs are interesting. Bels, used by Seagate, is a measure of sound power. Decibels A-weighted (presumably at 1m distance) is a measure of sound pressure level. A sound that measures 2.4 bels generally measures considerably lower than 24 dBA@1m SPL, so the Seagate would appear to be quieter. One would not expect such differences from such similarly spec’d drives. We’ll see from our own measurements soon enough.

Our samples were tested according to our standard
hard drive testing methodology. The significant change in our testing procedure is that as of mid-2008, we’re conducting most acoustics tests in our own anechoic chamber, which results in more accurate, lower SPL readings than before, especially as the SPL approaches 20 dBA and below, which is the territory of laptop drives. Our methodology focuses specifically on
noise, and great effort is taken to ensure it is comprehensively measured
and described. Performance is not tested comprehensively, for reasons discussed in detail in
the methodology article. In essence, between similar drives, we feel the performance differences are trivial, while the noise differences can be significant. Furthermore, many other hardware review sites (such as The Tech Report, Anandtech, and X-bit Labs) do a good job of covering the performance (speed) aspects of HDDs, while none of them do a thorough job of noise analysis.

Both forms of noise are evaluated objectively and
subjectively. Airborne acoustics are measured in our anechoic chamber using a lab reference
caliber microphone and computer measurement system. Measurements are taken at a distance of one meter from the top
of the drive using an A-weighted filter. Vibration noise is rated on a scale
of 1-10 by comparing against our standard reference drives.

Ambient conditions at the time of testing were 11 dBA and 20°C. 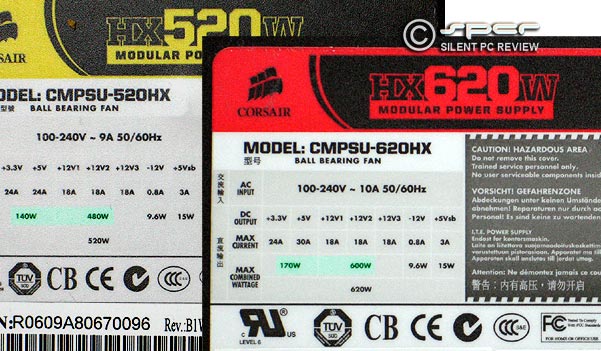 The results of the acoustic and vibration tests were somewhat surprising. First, despite the Seagate’s apparently lower acoustic spec, the WD was actually quieter at idle — by just under 1 dBA@1m. Subjectively, this difference is insignificant. What’s more surprising is that the WD measured lower in airborne noise despite its much higher level of vibration. Our standard procedure of placing the tested drive on a soft foam pad helped keep the measured SPL of the WD low by isolating the vibration from being transferred to the workbench — the workbench top would have become an acoustic diaphragm for the drive.

The WD Scorpio’s vibration level was high enough for possible shipping damage to be suspected, but S.M.A.R.T analysis using WD’s own Lifeguard Diagnostics sofware indicated perfectly good health for all of the tracked criteria.

The frequency spectrum captures below shows that the WD measures 10 dB higher at the primary 90 Hz tone of the spin speed (5400RPM), which is indicative of the vibration difference between the drives. Also evident is a higher midband peak in the Seagate which is probably responsible for the slightly higher overall SPL.

In the WD, the difference in perceived noise between seek and idle was so small to be trivial under the test conditions. There was a touch more audible noise when listened at about 1′ distance, but the measured SPL increase was less than 1 dBA@1m on average. Hitachi Tool gave access to AAM on the WD; there’s no point enabling it because there is no perceptible difference between lowest acoustic and highest performance. The low noise position always increases the access time.

Seek noise in the Seagate was more marked. AAM is not supported on this drive, so HD Tach was used to engage seek. The chattering caused SPL to rise about 2 dBA@1m higher than at idle.

Both drives had very low power demand, with the Seagate a touch lower across the board. With both drives, the heads unloaded after less than ~10 seconds of inactivity, then power demand dropped another 0.1~0.2 W. The load figures of 2.2 W and 2.5W are peaks; average load power was probably at least 10% less.

High transfer speed is expected with the high areal density of these drives, and both samples delivered the expected performance. There’s little to separate the two. It’s interesting to note that the ~70 MB/s read speed of these 5400RPM drive easily surpass the manufacturer’s specification of performance 59.0 MB/s for the 160GB 7200RPM Seagate Momentus reviewed a little over a year ago.

Considering their use in a notebook computer…

In a desktop PC…

One problem we run into when trying to compare the acoustics of these drive with those of previously tested ones is that the latter did not have the benefit of our anechoic chamber and improved audio test equipment. They were measured in the same room, but before the treatments which eliminated the echoes in the room and lowered the noise floor. The drives tested in this review are quiet, but how exactly they stack up again the previously tested drives is difficult to say precisely.

The last complete comparison table of tested 2.5" drives is on page 3 of the Seagate Momentus 160GB 7200RPM 2.5" drive review. The lowest measured SPL of any drive on that table was 17 dBA@1m, for a Samsung 40GB MP0402H, which has been our quiet HDD champion since it first came to our attention. One of those drive samples happens to be with us still today, so we ran it through our new test procedures in the anechoic chamber.

The little old Samsung retains its crown, being quieter by about 3 dBA@1m, and with AAM engaged, it’s just as quiet seeking as in idle. Will you be able to hear the increased loudness of the Seagate and WD 500 GB drives over the old Samsung? Maybe. In a laptop computer and quiet room, probably; but in a desktop, if you use soft mounting, probably not.

But drive technology has advanced; increased areal density alone has led to a big jump in read/write speed. The screen capture of HD Tach results for the Samsung tells the story. Few users would accept the 26.2 MB/s speed of the Samsung even if it is 3 dBA quieter; the WD and Seagate, with soft mounting, can be made quiet enough.

Another question that comes up is. "How much noise difference is there between these 2.5" drives and standard desktop drives?" Here’s a quick comparison between them and the latest desktop drives tested (or retested) in the anechoic chamber.

The recordings start with 8 seconds of silence, then 10 second segments
of the drive in the following states: idle, seek with AAM disabled. Ideally, you should set the volume of the playback during the "sound of silence", then do not touch the volume control again throughout the listening.

Recordings of Desktop Drives in the anechoic chamber:

The WD Scorpio Blue and the Seagate Momentus 5400.6 500GB 5400RPM notebook drives both provide very good performance and capacity that would have been gi-normous even in a desktop drive a couple of years ago. The ~70 MB/s average read speed of these models makes them nearly as fast as today’s desktop drives in data transfers. Yet, they are miserly in their energy demand, asking less than 1W in idle and no more than 2.5W at any time.

We’ve usually associated high capacity and performance with higher noise. In these 500GB notebook drives, the acoustic level is quite low, nearly equal, but there are subtle differences. The WD has a bit more vibration, which will cause the case it’s mounted in to vibrate and increase its noise floor. The Seagate has much lower vibration but a bit more seek noise, and the contrast between that and idle will be more noticeable. It’s a toss-up as to which is the better choice for the noise conscious user.

For a desktop PC, either of these drives should be soft-mounted for best noise benefits. As a replacement notebook drive, the Seagate gets the nod; its noise will be less evident in idle, which is the dominant mode even for power users. (Owners of older laptops should ensure that their machine accepts the SATA interface of these drives.)

At the ~$100 asking price, the capacity and speed of these little drives is astonishing for anyone who recalls paying $300+ for a 40GB 3.5" drive less than a decade ago. These are good times for HDD consumers.

Many thanks to Seagate
and to Western Digital for the respective drive samples.