From the people who brought you Q-Technology comes a new PSU called the Nexus NX-3000. The new model is claimed to be 5(!!) dBA quieter than the quietest fan-equipped ATX/PS2 power supplies. Yet with high efficiency and fan intelligence, it is supposed to stay cool with good airflow under high loads. We agree. It’s the quietest fan-cooled PSU we’ve encountered to date, and it delivers power with aplomb. 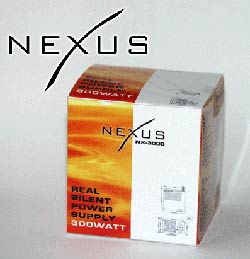 From the people who brought you Q-Technology comes a new PSU called the Nexus NX-3000. The new model is claimed to be 5 dBA quieter than the quietest fan-equipped ATX/PS2 power supplies. Yet with high efficiency and fan intelligence, it stays cool with good airflow under high loads.

A report based on acoustic tests conducted in an anechoic chamber was provided. Unfortunately, they insisted I not publish the report; but I am allowed to tell you about it. I believe the reason for this is that the Nexus is tested along with the Q-Technology QT-02300, which does not fare well in the comparison.

In any case, the acoustics report indicates that in an ambient of 30C (not clearly defined whether this is room temperature or intake air temperature), the Nexus 3000 remains at 22-23 dBA @ 1 meter up to ~100W output. Even at 150W, the noise is only ~26 dBA. The graph below from the acoustics report, digitally edited to show only the Nexus information, provides noise performance through its entire power range. 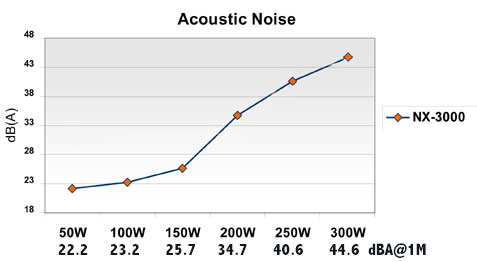 It is an impressive set of data.

The Nexus bears a strong resemblance to the Zalman ZM300A-APF as well as some of the PC Power and Cooling units. The stamped-put grill for the fan is an obvious difference, but the case, intake ventilation slots and the extra mounting flange are all very familiar. 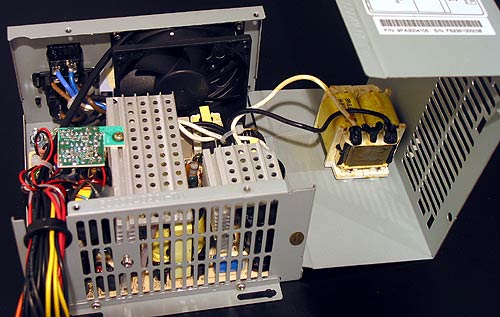 Things are a bit different under the hood. One of the heatsinks is half the size of the other. This is to make room for the transformer mounted off the side of the cover, just behind the fan. One would think this is a hefty bit of airflow impedance. A brief examination of the unit tells me little. It does not look much different from most PSUs. For the record, here’s a better internal photo. The small PCB with traces facing up appears to be the main fan control circuit. The fan leads are soldered directly to this PCB. 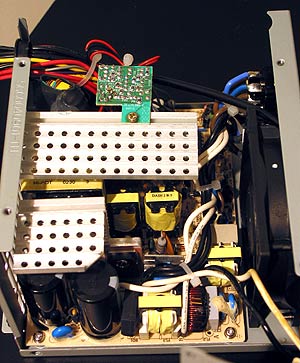 The fan is familiar, too. It is identical to the one used in the Zalman ZM300A: MGA8012HB by Protechnic Electric. As mentioned in the Zalman review, it is a 0.24A unit, similar in rating to most PSU fans. A web search finally netted some information about this fan. Protechnic Electric appears to be a Chinese subsidiary or partner of a Korean company called Sechang Semicon. Protechnic’s fan catalog was downloaded from this site.

The basics of this 12VDC Dual-Ball Bearing fan:

The 29 dBA rating is lower than most similar fans. Listening with the PSU on idle, I can say that airflow noise is present, but bearing noise is virtually absent. It has a smooth, even sound.

There are five 4-pin Molex connectors and two floppy drive power connectors on three sets of 16″ wires. Both the length and the number of connectors are modest, compared to many high end PSUs, which tend to provide to much length and number, forcing extra cabling and connectors to be bundled up and tucked away somehow in the typical desktop / tower PC. The main ATX and 12V connectors are on 20″ wire sets. Plus there is the useless (for most) 6-pin 5 + 3.3V connector on another 20″ wire set.

Since the last PSU review (Vantech Stealth), some changes have been made to the testing procedures. Some readers think this is boring or unnecessary, but as it forms the basis for results and conclusions, I strongly recommend you read this — either now or after you check the conclusions.

The core PSU test tool on SilentPCReview’s test bench is the DBS-2100 load tester, made (in Taiwan by D-RAM Computer Company) specifically for testing computer power supplies. The machine consists of a large bank of high power precision resistors along with an extensive selection of switches on the front panel calibrated in Amps (current) and grouped into the 5 voltage lines: +5, +12, -12V, +3.3, -5, +5SR. Leads from the PSU connect into the front panel. It is shown above with leads from a PSU plugged in. 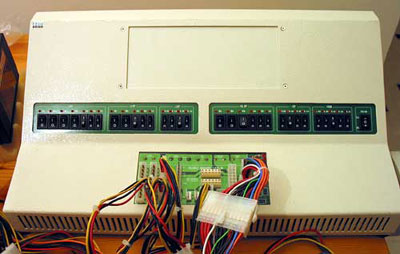 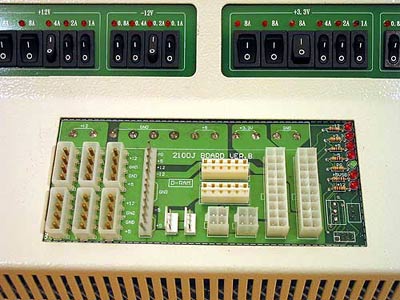 To ensure safe current delivery, the DC output connector closest to the PSU on each set of leads is hooked up to the load tester. This ensures that the current delivered is distributed to as many short leads as possible. When pushing a PSU to its rated output, the heat generated in the wires can be an issue.

The PSU is tested at 4 DC output power levels:

Care is taken to ensure that the load on each of the voltage lines exceed the ratings for the tested unit. The PSU is left running at least 10 minutes at each power level before measurements are made. 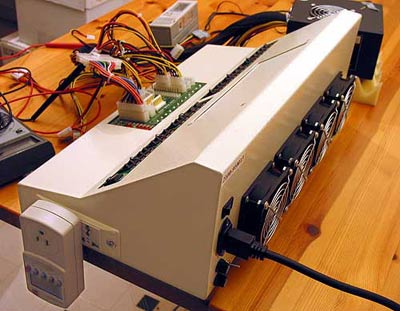 The DBS-2100 is equipped with 2 individually fused AC outlets and 4 exhaust fans on the back panel. A bypass switch toggles the fans on / off so that noise measurements can be made. The resistors get very hot under high loads.

Kill-A-Watt AC Power Meter is plugged into the AC outlet on the side of the DBS-2100 in the above picture. The AC power draw of the PSU is measured at each of the 4 power loads. The efficiency of the PSU at each power level is calculated thus: divide DC power output by AC power consumption. It always varies with load, and also temperature. PSUs seem to run more efficiently when warmer, up to a point.

The Heath / Zenith SM-2320 multimeter, a fairly standard unit, is used to measure fan output voltages and the line voltages of the PSU output. The latter is done via the terminal pin on the front panel, above the connections for the DC outputs from the PSU.

The Test Lab is a spare kitchen measuring 12 by 10 feet, with an 8 foot ceiling and vinyl tile floors. The acoustics are quite lively. The PSU under test is placed on a piece of soft thick foam to prevent transfer of vibrations to the table top. Temperature in the lab is usually 20C or lower. This is something of a problem as PSUs usually operate in environments that easily reach 45C. Sited next to or above the CPU, the PSU is always subject to external heat. The low ambient temperature explains why the Nexus PSU never fan never reached 12V even at full power output for over 20 minutes. I am devising a solution to this problem and will add postscripts of all the tested PSUs as applicable.

No PSU Temperature Measurements will be done any more. Originally, it was meant to provide a more complete picture of PSU performance, but discussions in the SPCR forums have convinced me that there are far too many variables at play to make internal PSU temperature a reliable gauge of… anything. There are way too many ways to interpret the numbers. Check this thread for the full discussion. The most critical parameter for thermal performance is efficiency. If efficiency is high, the size of the heatsinks and vent openings large, and the fan can blow a lot of air at full power, then excellent cooling is ensured.

The Heath AD-1308 is a portable half-octave Real Time Spectrum Analyzer with sound level meter (SLM) functions. Below 40 dBA, its accuracy is poor, limited to 3 dB increments, down to 23 dBA. Some 15 years old, this LED-based unit has long since been displaced by digital devices with better interfaces to PCs. The “A” weighting was used; it most closely approximates the frequency response characteristics of human hearing.

The microphone on the sound meter is positioned within an inch to the side of the PSU fan exhaust to avoid fan turbulence in the microphone itself. The dBA obtained here cannot be compared to any other measurements due to the lack of adherence to a repeatable standard and the uncontrolled reflective environment.

The noise measurements are always accompanied by descriptions of subjective perceptions. Without these, the measurements, which are not that reliable, provide only part of the picture.

VR = Voltage regulation was excellent, dead-on at almost all loads, on all lines. The worst case was a negligible 11.86V for the 12V line at 300W. All others were within 0.1V, better than 2%, in other words.

Efficiency, at 68.5% to 72.5%, was higher than specified at all power levels beyond the minimum.

V Fan: The voltage to the fan started at a low 4.6V and did not cross 5V until over 200W DC power was delivered. 8V was reached only after full power was delivered for more than 15 minutes. This data is considerably different than that presented in the test report mentioned at the beginning of the review. Their fan / power graph is shown below. 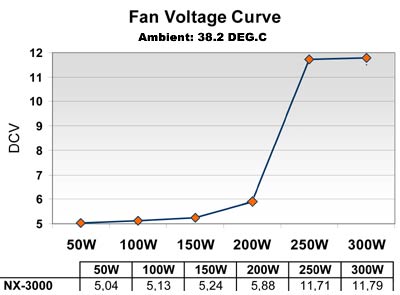 Note, however, that this test was conducted at 38C, which is much closer to the temperature that prevails in a working PC. The SPCR test lab temperature was only ~20C at most when the power load tests were conducted. In future, this test will be repeated when a suitable temperature controlled environment can be created for use in all PSU reviews.

Noise was measured within 1-2 cm (less than 1 inch) from the edge of the PSU fan exhaust, not in the airflow path. At all driving voltages under 5V, well beyond 150W delivered power, the unit remained very quiet. Even though the measured noise did not change from 4.6V to nearly 5V, a very small increase could be heard. This reflects the poor sensitivity of the meter. Even at full power, the noise of the fan at 8.4V was modest. The numbers can’t be compared with those the Nexus acoustics report, as measuring techniques were different, and the ambient temperature in their test was a good 10C higher, which would mean higher noise. They do jibe with what I heard and correspond roughly to what I measured.

It seems foregone, doesn’t it?

The Nexus NX-3000 has good air vents (even with a stamped fan grill); wiring and connectors appropriate for desktop PCs; it stays really quiet to well beyond typical desktop PC power needs; maintains very tight line regulation throughout the power range; doesn’t exhibit any audible coil whine; has high efficiency and big heatsinks for good cooling; and survives 20 minutes of full power operation without duress. It is the quietest fan cooled PSU I have used by several dBA. The difference is most definitely audible in a real system, inside a real PC — if the rest of your components are quiet enough. Aside from the stamped exhaust grill, the only other downside I can think of is the suggested price of US$75, but we’ll see what resellers decide to sell it for. It’s usually less.

It is a good PSU with excellent voltage regulation that is well-optimized for use in a quiet desktop / tower PC. Let’s put it this way: the Nexus NX-3000 has found a permanent home on my test bench, along with the Panaflo-modified Seasonics. This one I will not modify. Strongly recommended.

The Nexus NX-3000 takes over the crown on the Recommended Quiet PSU list. How long shall the new king live?

Our thanks to Silent PC NL / CG Consultant BV for the review samples and their kind support.