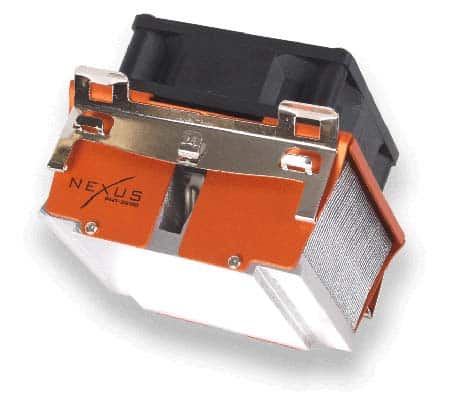 The PFT-3600 is a P4 Cooler with a 70mm fan skivved from a single piece of aluminum. Compact, light and easy to install, it is from Nexus, one of quiet computing’s few truly well-established brands. Read the Nexus PFT-3600 review here.

Nexus is a brand focused on quiet components and has produced a number of winners in the past. among them the Nexus NX-3000 and NX-3500 power supplies, and the "Real SIlent" line of fans — which really are very quiet. It’s probably not well known, but the Nexus folks have been involved in quiet computing products for a long time; they were behind the creation of the first quiet PSU brand, Q-Technology. For some time time, Nexus has offered a wide range of quiet PC products: PSUs and fans, cases and damping materials, accessories and heatsinks.

SPCR previously reviewed another integrated heatsink/fan by Nexus, the KCZ-2700. That model proved to be a simple, cost effective, compact unit with decent noise levels and a conservative design. The Nexus PHT-3600 appears to be a more robust cooling solution that may lend itself to silence more than its little brother. 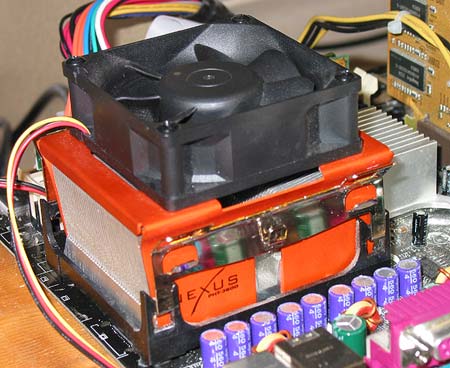 The PHT-3600 is an all-aluminum heat sink equipped with a 2400 RPM, 70mm fan, which according to Nexus produces 19 dB. The use of a 70mm is a bit odd given that Nexus has a wonderful 80mm fan with excellent cooling properties, the Nexus "Real Silent" case fan. In addition, smaller fans generally emit more high frequency noise than larger fans, so a bit of skepticism from a silencing perspective should be expected.

According to Nexus, the V-shaped fins are supposed to optimize airflow and prevent "air obstruction", resulting in a stable RPM level and low noise operation. The Nexus says the PHT-3600 is skivved from a single piece of aluminum:

"…one of the worlds most advanced technologies. This concept permits the production of heat sinks with a precise and super fine detail previously considered impossible. SkiveTek ® represents a process of shaping materials to produce lightweight, high fin density thermal solutions. Base plate and fins are constructed out of one piece of pure aluminum or copper by cutting the material into thin layers, bending the fins in place. No bonding, welding, soldering or adhesive is involved. The joint between fin and base is continuous aluminum or copper."

This technique has been used by other brands with not only aluminum but also copper, but invariably the proof is in the pudding.

One positive aspect of the PHT-3600 is its relatively compact size and low weight. At 370 grams, it easily meets the Intel limit of 450 grams. It also has a very simple, easy to use clip that requires no tools for installation. Lastly, included with the heatsink is a cable (with an inline resistor?) to drop the fan voltage to 10V, the NRC1000:

The speed reduction cable is a nice touch, although I would have preferred something that enables variable voltage settings, like the Zalman FanMate.

The PHT-3600 was installed and tested on Mike Chin’s standard P4 heatsink testing rig, described in past HS reviews:

The ambient temperature in the test lab was 22°C. Ambient noise in the lab was ~21 dBA. For the acoustic testing, the HSF was moved to a quieter room which measured ~16 dBA. Maximum load temperatures were recorded 30 minutes into a CPU stress test with CPUBurn.

Since the PHT-3600 doesn’t have mounts for an 80mm fan, it could not be tested with the SPCR reference fan, the Panaflo 80L. The only fan used was the stock 70mm fan. The PHT-3600 was tested at four fan settings, including the 10V NCR1000 cable. The noise was measured separately with the HSF in a quiet room with no other equipment running at all. Note that by itself in free air, the fan’s noise drops by 1~2 dBA at lower speeds and 3~6 dBA at high speeds.

The first thing that comes to mind when interpreting the above results is that something is amiss concerning the 19 dBA claim by Nexus — even at 7V, we measured 26 dBA. This discrepancy is too much to ignore, even taking into account that the Nexus claim could be a measurement of the fan in free air rather than attached to the heat sink where turbulence affects the sound levels. The cooling performance worsens as the voltage drops, even approaching thermal overload in CPUBurn at 7V. This might be a result of the tight spacing of the fins, which could provide high impedance to airflow. It could also be an out-of-spec or damaged fan, but there are no obvious signs of bearing damage.

The fan has a sort of clatter reminiscent of the little fans one often finds on video cards. It’s not smooth and constant like a Panaflo 80L, but more of a solid drone at 12V. At lower speeds, it is quite a bit more relaxed, but still has sort of a puttering noise and a mild high pitched whine. Comparatively speaking, the Panaflo has a very quiet, homogenous sound to it at 7V, and no clatter to speak of. We would have much preferred to see the Nexus 80mm fan on this heatsink, as that fan is something of a noise champ.

While the Nexus PHT-3600 certainly isn’t a bad heatsink, there also isn’t anything really exceptional to say about it. It has decent cooling properties, as well as adequately low noise, but doesn’t really shine in any particular scenario. We were not able to confirm the claim of 19 dBA, or even come within seven dBA of it. Taking into consideration the cost of the PHT-3600, there isn’t a compelling case for a strong recommendation.

On the other hand, the heatsink is very compact — anyone working with tight space considerations should probably have a close look at the PHT-3600. Its relatively light weight also is a plus if transportation of the computer is a frequent occurrence. Lastly, the included 10V cable is a welcome addition to any heatsink marketed as a silent solution.

Much thanks to Nexus Technology and EndPCNoise for the PHT-3600 sample.