Noctua’s NH-C14 is a big, beastly follow-up to the popular NH-C12P top-down CPU cooler. Armed with a bigger fin stack and two 14 cm fans, the C14 is the first down-blower cooler that truly competes against the against the formidable side-blowing towers that have taken over in recent years.

Counted among the top PC cooling manufacturers is a little Austrian company called Noctua. The strange thing is they have one of the smallest product catalogues you can imagine. They are known for their fans, which have only two basic designs, and their CPU heatsinks, of which they only carry five retail models. Despite this, their products are received exceedingly well so their apparent philosophy that quality is better than quantity has merit. Even their older products are still well-regarded, like the three year old Noctua NH-U12P which still holds a top five spot on our high performance CPU cooling chart.

The limited number of Noctua heatsinks makes a new release a fairly notable event, such was the case for the dual fan NH-D14. Utilizing a massive split heatsink design and a pair of fans (oddly of different sizes), it quickly established itself as one of the best air coolers money could buy. Noctua is hoping to do the same with the NH-C14, a larger version of the down-blowing NH-C12P with two 14 cm fans. The C12P and other top-down coolers do not fare well against their side-blowing competition, so a second fan may help tip the balance. Providing active airflow over the components surrounding the CPU can be beneficial, particularly to the power regulation circuitry, potentially increasing their efficiency and longevity.

It’s a good sign that the most critical thing we have to say about the C14 is its unnecessarily large packaging. The box containing the actual cooler is in the center book-ended by two empty shells. Above and below are thinner boxes, one with accessories inside, while the other simply acts as a cushion. It’s basically the world’s most boring nesting doll.

Once all the boxes have been emptied, we found the contents to be neatly segregated into separate baggies for AMD hardware, Intel hardware, and communal parts. The C14 uses the same SecuFirm2 mounting system sold with the D14. It’s very secure and practically idiot-proof.

The Noctua NH-C14 is composed of a copper base, six “C” shaped copper heatpipes and a stack of 68 fins, all nickel-plated. By our measurements
it weighs approximately 1010 grams, 680 grams without the fans and clips, and has a height of 130 mm, 103 mm minus the top fan.

The most critical aspect of installation is that the heatsink be securely
mounted. A firm mating results in good contact between the heatsink’s base and
the CPU heatspreader and more efficient heat conduction. Ideally it should
also be a simple procedure with the user having to handle as few pieces of
hardware as possible. On the C14, Noctua uses the same SecuFirm2 mounting system featured on the D14. If you’re familiar with it, skip ahead.

Testing was done on our
i7-1366 heatsink testing platform. A summary of the test system
and procedure follows.

We begin with an analysis of the stock fan, the NF-P14, which is also one of the fans that ships with the side-blowing D14 heatsink. It’s a nine blade 140 mm fan with 120 mm fan holes and a round frame with open corners. 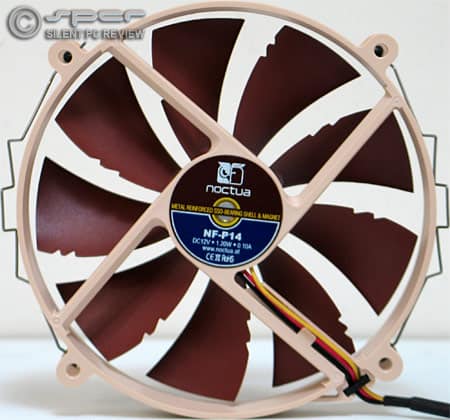 Noctua’s patented “vortex notches” which look like small bite marks are designed to break up turbulence. The blades have gentle curves and are relatively thin. The P14 fan has an unusually high starting voltage, so it’s best to run 7V and above unless it can be controlled automatically.

The acoustics of the P14 are generally smooth, with most of the audible noise being in the form of air turbulence which of course is unavoidable. There is also an odd pulsing hum that is only evident at and close to 9V. The two fan samples varied in speed by only 10~30 RPM, not enough to develop any intermodulation effects, something that afflicted the NH-D14 which used a P14 with a P12. Combined, the C14’s two fans become what we consider quiet at about 8V.

Virtually identical CPU temperatures were produced with both single fan configurations. Placing the fan underneath the fin-stack was far superior for cooling the board components as one would expect. With the fan closer to the PCB, we recorded much lower northbridge and VRM heatsink temperatures, up to 13°C and 9°C respectively depending on the fan speed. When the fans were used in tandem, CPU cooling improved marginally at similar noise levels. The same can be said for heatsinks around the socket, at least when the fans were set to quiet levels.

The only surprise was how well our 120 mm reference fan performed. Despite not covering the entire surface of the heatsink, the Nexus actually generated better overall results than the stock fan in the bottom configuration. The results with the fan on top were omitted for brevity; on average CPU cooling was 7°C worse while the NB/VRM took a 15°C hit. Using a single fan above the fin-stack should be avoided.

The following is a comparison chart of the top coolers we’ve tested so far on our LGA1366 heatsink platform. The results were generated using our reference Nexus 120 mm fan as is indicative of CPU cooling performance with a single low airflow/noise fan.

The C14 outperforms its smaller predecessor, the C12P, by about 4°C on average. This makes it easily the best down-blowing cooler we’ve tested, and on par with many reputable tower models. With two fans it’s propelled into elite status. While this isn’t a fair apples-to-apples comparison, it’s still an impressive display of prowess for top-downer.

The design of the Noctua NH-C14 is nothing mind-blowing, essentially a larger version of the NH-C12P with Noctua’s updated (though not that different) universal mounting system and a pair of 14 cm fans. However these more powerful fans allowed the Noctua to pack the fins more densely without sacrificing low airflow performance. The end result is superb CPU cooling when both fans are utilized, and solid cooling with just one. It manages this while delivering airflow over the circuitry around the CPU, over the VRMs, capacitors, and chipset as well. Down-blowing heatsinks typically do not perform as well as their side-blowing brethren when it comes to CPU cooling, but the C14 bucks this trend.

Perhaps more importantly, it possesses something that most high performance coolers do not: a diminutive stature. With a fan on top, it measures 130 mm tall, about 25~30 mm less than most large tower heatsinks, allowing it to fit into smaller cases. The shorter height also allows many enthusiast case owners to keep the ubiquitous extra fan on the side panel hanging over the CPU area. The C14 becomes even shorter, measuring only 103 mm high if you opt to use a single fan underneath the fin-stack. Alternatively, you just use a fan on top to avoid interference with tall memory sticks or an oversized chipset/VRM heatsink though this configuration isn’t optimal for performance. The C14’s three different fan configurations make it the most versatile heatsink we’ve ever encountered, though for most users we recommend just the one fan on the bottom.

We also admire Noctua’s attention to detail. Like all of their coolers, from the moment you open the box to when you finish mounting, there’s this feeling that they’ve thought of everything. All the accessories are sorted, separated, and labeled. The installation instructions are clear, and the multi-socket SecuFirm2 mounting kit is not only secure, but simple to put together. For those of us who lack fan control, 7V/9V low noise adapters are included. Only using a single fan? Fan isolators, screws, and 140 mm adapters are provided to use the second fan elsewhere in your case. You even get a screwdriver and a fancy metallic case badge rather than a cheap tacky sticker.

The first class treatment and top-notch cooling comes at a hefty price though as the NH-C14 has a steep MSRP of US$85, though we expect the best street price to be a bit lower. Its side-blowing brother, the NH-D14 debuted at US$90 but you can pick one up these days for US$70~$75 at some retailers. If you think about it, with quality 140 mm fans costing US$10~$15 separately, the heatsink alone has a value of US$55~$65 which isn’t too shabby for a versatile short top-down cooler that delivers excellent performance. However if you don’t care about board cooling, there are a dozen cheaper alternatives that will net you comparable or better performance.

The Noctua NH-C14 is Recommended by SPCR.

Our thanks to Noctua for the NH-C14 heatsink sample.