Hard drives compete with fans in the power supply and on the CPU heatsink for top noisemaker rank in the typical PC. The topic of reducing or eliminating hard drive noise is covered in SPCR with articles in Mods and Projects, numerous discussions on our forum, and a review of the Smart Drive noise reducing enclosure from Japan (also supplied by Silicon Acoustics).

From the other side of the world, Germany, comes No-Vibes III, a very different approach to the problem of hard drive noise. No-Vibes appeared at least a year ago, as one of NoiseControl.de’s first products, along with the famous Silverado heatsink, which uses a slug of silver as its interface to the CPU. The “III” designation suggests substantial evolution; not having actually examined the first generation model, it is difficult to tell what the changes are.

While Smart Drive is an intelligent realization of the seal-and-shut-up-that-hard-drive idea, No-Vibes III reduces hard drive noise by decoupling it from the case. It doesn’t reduce hard drive noise, per se, but rather, the noise caused by case panels vibrating in harmony with the hard drive. No-Vibes III achieves this mechanical isolation by suspending the hard drive securely with three hefty rubber bands in a sturdy, well-designed metal frame that goes into a 5.25″ bay. Silicon Acoustics states that the device is “ideal for drives like the Barracuda IV whose noise is primarily vibrational in nature.” This product was the inspiration for the DIY elastic suspension devised in the article HD Sandwiches & Suspensions. 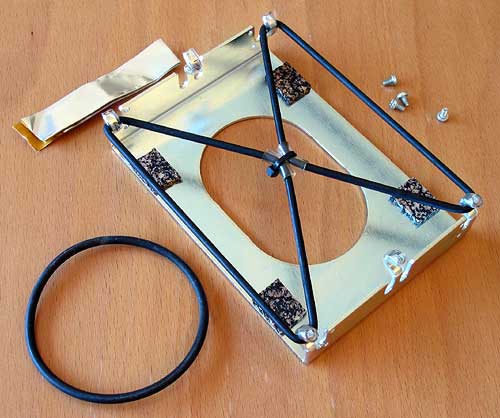 Shown above is the complete No-Vibes III package — minus the excellent, detailed instruction sheet. The centerpoint of the X in the frame is a neat joint of 2 rubber bands with some protective soft plastic sleeving and a cable tie. The 2 rubber bands are secured to 4 soft-sleeved hooks at the top corners of the frame. The photo below show how a hard drive is secured. 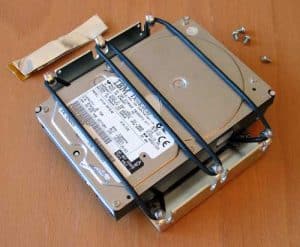 When the third rubber ring is hooked in place, the drive is pushed down a bit so that it makes contact with 4 cork-rubber pads on the bottom corners. They provide soft support. A bit of tugging on the rubber band at the hooks helps to adjust tension as necessary.

Actually, the third rubber band does not seem to be required. It may be there mostly for security, but even without it, no amount of vigorous shaking of the whole assembly could dislodge the drive from the frame. Without the third rubber band, the drive is completely suspended without touching the cork-rubber pads. This would provide a touch more isolation as the cork-rubber pads don’t flex as much as the rubber bands.

The metal adhesive tape is provided to cover sharp edges on the drive to prevent damage to the rubber bands. The metal tape should not be affixed to any exposed electronic parts or PCB circuitry on the drive to avoid any short circuits. The 4 screws secure the frame to a 5.25″ bay like a CD drive.

How well does No-Vibes III work?

No-Vibes was installed in a PC in which has a 5V quiet Panaflo fan in the PSU and a 7V Panaflo fan over the CPU HS. It is a very quiet machine. The quiet system allowed the effect of the No-Vibes to be easily analyzed. An otherwise empty, flimsy generic case was also used, with an extended IDE power cable running to the drive from a PSU outside the case.

Compared to the drive mounted conventionally in a 3.5″ bay, the difference is significant with all the (7200 rpm) drives tried: a Seagate Barracuda IV (1- platter), IBM Deskstar 75GXP (2-platter), and a Western Digital WD200B (1-platter). All drives have some low frequency vibration that is conducted into the case when screw-mounted normally, and converted to noise by panel movements. No-Vibes virtually eliminates this noise. The difference was smallest with the Seagate, which is really only audible when seeking or writing. When mounted in the No-Vibes, the seek noise became essentially inaudible.

With both of the noisier IBM and WD drives, the typical high frequency 7200 rpm whine remains more or less unchanged. Lower frequency noise is reduced dramatically, especially when seeking or writing. I tried stuffing some foam around the drive, especially between the 5.25″ bay covers and the drive. The foam reduced but did not eliminate the high frequency whine completely with the case closed.

The noise data collection was limited to a few before and after readings on an Heath analog sound level meter, because the results depend so much on the case and the drive. The drop in noise achieved by the No-Vibes was 2-3 dBA in a good Landmark 202 case, and 3-5 dBA in the generic flimsy case. Even though the measured difference does not seem large, subjectively, the improvement is easily heard by just about anyone.

The flimsiest case would presumably benefit most. Sturdy cases with good internal damping, especially those with a plasticized skin and insulated internal joinery would probably show the least improvement.

Compared to standard mounting, suspending a hard drive increases temperature somewhat, perhaps 3~5° C, depending on the particulars of the case and component arrangement. This is discussed in detail in the Sandwiches & Suspensions article. The increased drive temperature tendency applies to the No-Vibes as well. Standard screw mounting provides for some cooling by heat conduction to the case. Unless you have a very hot case with low airflow, this should not be any problem. You may wish to monitor HD temperatures using software such as DTemp or an external temperature probe. One way to reduce HD temperature is by attaching aluminum channels as heatsinks along the sides of the drive, as discussed in our article Effective Passive Hard Drive Cooling.

All in all, NoVibes III is a very good product for use with already quiet hard drives in very quiet systems. No mess, no fuss; installation and use is totally simple. A nice addition in the arsenal against PC noise.

Our thanks to Silicon Acoustics for the review sample and their support.