The Source 530 abandons much of the style NZXT is known for in favor of relatively pedestrian looks and an open airflow scheme. Though not designed as a quiet case, it nevertheless qualifies as one through sheer cooling efficiency.

NZXT cases usually have a bold visual style along with a tidy interior that keeps the more unsightly guts of the system out of view. The H440 is a prime example, with its striking asymmetric design, hidden power supply and drive bays, and the various color accent options. Their more affordable models also exhibit the NZXT style, like the Source S340, possibly the best looking tower on the market at the sub-US$100 price-point. The larger Source 530 examined here belongs to the same family, but it abandons some of NZXT’s design theme in favor of airflow to maximize performance.

This ATX tower is a bit of anomaly in NZXT’s catalogue, a fairly open mid-range design available only in a single matte black model like their budget modes; usually, a NZXT case priced at US$90 has multiple color options. The Source 530 has some girth to it, measuring close to 20 inches in height/depth and more than 9 inches in width. The heavily ventilated front panel accommodates two 120/140 mm fans or a single 200 mm giant. The ceiling has fully exposed fan mounts with a raised design that support up to three 120/140 mm fans, making it the perfect spot for securing a radiator for watercooling. The interior is not covered up in any way and the window is shaped and positioned to look away from from the messier areas.

The Source 530’s front panel is imbued with a bit of NZXT’s iconic asymmetric design but it’s so slight that it can be mistaken for shipping damage. The top-right adds to this effect as there’s a slight droop where the hard drive activity LED is located, making the corner appear caved in. The plastic bezel has semi-reflective solid sides while the front has a mesh design covering a grate with larger holes on the inside. The case’s three tool-less 5.25 inch drive covers are made up of a similar mesh material.

A small white box inside the case is packed with the icnluded accessories. Each set of screws is separated into individual bags along with bolts (presumably for mounting fans to a radiator), a nut driver to secure the standoffs, and numerous zip-ties for bundling up cables.

While the Source 530 has fairly thick panels for a sub-$100 case, the
internal construction leaves a lot to be desired. The drive cages are thin,
as is the motherboard tray. The latter extends all the way to the floor and
is riveted to the 5.25 inch drive structure, giving the entire structure extra
stability, but the tray itself lacks material as it is punched full of holes.

With ample clearance on each side of the motherboard and removable drive cages,
the Source 530 is easy to assemble if you have any experience. Cable management
may be slightly more tedious but only because the fan hub is located behind
the motherboard tray and there are a couple of extra cables for connecting the
rear LEDs.

For our baseline noise tests, the system is left idle, the CPU fan is set to its minimum speed under PWM control, and the GPU fans are off by default. The system fans are connected to controllable fan headers and are set to a variety of speeds using SpeedFan. This gives us a good idea of what the stock fans sound like at different speeds with minimal interference from other sources.

Before any measurements, a small modification to the case was made. A foam
block was taped to the 5.25 inch drive bay just out of view of the side window.
While drive vibration wasn’t an issue (at least when using a single drive cage),
pressing down on the left side panel, particularly near the center, made the
system noticeably quieter, possibly because the panel doesn’t fit as tightly
against the chassis as it should. This simple addition helped steady the panel,
improving both the sound quality and measurable noise level.

With the rest of the system’s fans running at minimum speed, the case fans
don’t make an acoustic impact on the noise level of the machine until about
40% speed (670 RPM). They remain fairly quiet until approximately 1000 RPM,
becoming significantly louder beyond this point as the speed increases. At full
speed they emit 26 dBA@1m, which is moderate, but reasonable for a tower with
only two fans. 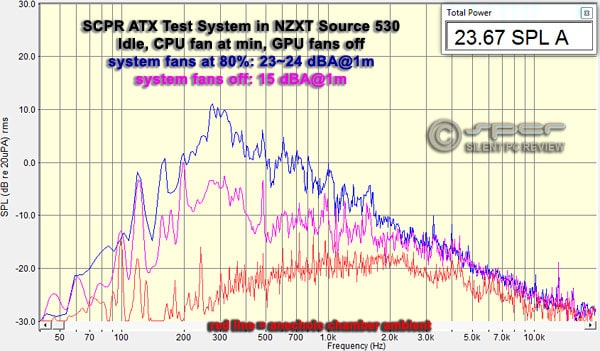 The included fan is the FN V2 120 mm, the same used in the Source S340. It
has a delightfully smooth sound with a broadband acoustic profile. Much of the
noise it produces is in the medium frequency range between 250 and 1000 Hz and
it’s bereft of tonality at all speeds. While the Source 530 is a well-ventilated
performance-oriented case, that didn’t stop NZXT from equipping it with one
of the best sounding stock fans on the market.

For our system configuration, the stock fans running at 50% (800 RPM) produces the quietest result, 23~24 dBA@1m with the GPU fans at 44% speed. Increasing the speed of the system fans doesn’t have a big impact on CPU cooling, while motherboard cooling only see a noticeable improvement at 70% and above. The GPU does cool down enough to slow its fans slightly but the extra noise from the system fans generates a net noise gain for the system.

Removing the dust filter inside the front panel has barely any impact on performance. The bezel is so well ventilated, the filter has no influence. 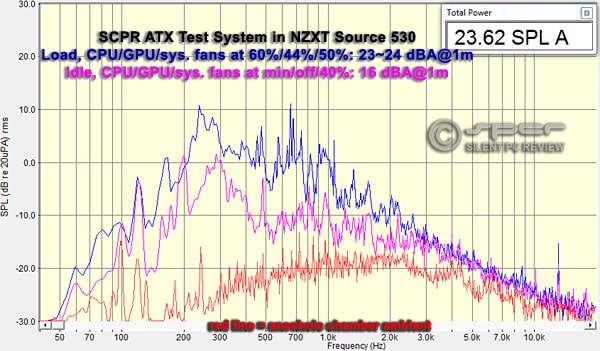 The noise emitted doesn’t differ much from what was produced during
the baseline tests. The CPU and GPU fans sound worse than the stock case fans,
but they don’t spin fast enough to change the overall sound of the machine.
At the machine’s sweet spot, the noise is about as pleasant as 25 dBA@1m can
sound.

Compared to previously tested offerings at or around US$100,
the Source 530 does fairly well, coming close to the Fractal Define S in overall
performance. In terms of ventilation, it is the most “open” model
in this comparison, but this doesn’t hurt it in the noise department. Under
our testing parameters, it can boast slightly improved CPU and motherboard temperatures
as well as a lower noise level than most of the field.

The NZXT Source 530 strikes a nice balance between airflow and noise, proving
that a heavily ventilated model can find the sweet spot just as well as more
closed designs. Versatility is great as it offers an ample amount of clearance
for all major components and CPU coolers of all sizes, support for a fair number
of drives, removable/interchangeable drive cages, and plenty of fan placements.
A fan controller for the hub would have been welcome, but at least the included
fans sound sublime and hard drive vibration is limited. Though not a quiet case
by design, it has the major strengths PC sileners seek.

Despite being the best performing NZXT case we’ve tested thus far, it is possibly
the least NZXT-like model in appearance. The exterior lacks the clean lines
of the S340, the striking asymmetry of the H440, and it is not offered in multiple
colors. The ceiling grate is an eyesore, jutting out from the rest of the chassis,
and the spot housing the hard drive LED looks droopy and sad. On the inside,
it doesn’t attempt to hide the drive bays, power supply, and cabling. Instead
of making the interior neater, they utilized a small, oddly shaped window to
keep the mess out of view. The lighting at the back is a nice touch, but overall,
it lacks the style exuded by most of NZXT’s lineup.

The Source 530’s appearance is a stark contrast to the Fractal Design Define S and Define R5, but it surprisingly offers comparable performance for a reasonable US$90. It’s a splendid choice for an enthusiast tower case, if you don’t mind its pedestrian aesthetics.

Our thanks to NZXT
for the Source 530 case sample.

The NZXT Source 530 is recommended by SPCR