For a US$70 tower case, the NZXT S340 is surprisingly well built, attractive, and usable. It offers a level of refinement not usually available at this price-point.

NZXT has cultivated a reputation for producing tower cases with a high degree of fit and finish and a heavy emphasis on usability. Their “Source” series of budget cases aren’t as upscale as the rest of their lineup, offering the cash-strapped a taste of the NZXT experience at a more palatable price. The Source S340 is perhaps their most intriguing SKU, straddling the border between flimsy US$50 enclosures and more versatile and feature-rich US$100+ models. The question is whether it’s the former masquerading as the latter or the other way around.

Like many NZXT cases, the S340 is available in a variety of colors. Our sample is the white model but it also comes in all black, and in black with red or blue trim/LEDs. The most interesting physical aspect is the completely solid front reminiscent of the H440. While the panel is made of plastic, it has a steel face that matches the sides, giving it a plain but elegant look. The main intake vent is just a wide and long gap running from the top of the bezel to the bottom. The lack of external drive bays will undoubtedly disappoint users still bound to optical media and those who prefer the ability to add a panel for controlling fans or reading memory cards, etc. The sad fact is the wind is shifting away from this paradigm — in this day and age, few people need this versatility, and the S340 is an affordable chassis designed for the masses.

That’s also probably why storage support has been cut back to just two 2.5 inch and three 3.5 inch drives. This should be a boon to performance as all the drive bays, which usually impede airflow from reaching the critical components, have been dispensed with. Instead of the 6+ fan placements in a typical modern tower, the S340 provides just four with two 120 mm fans included. AIO cooling units can be utilized but they can only be installed at the front or rear as the top offers just enough space for a fan and nothing else. Limiting these features also allows for a slimmed down body, with the S340 measuring about 17.5 inches tall and 17.0 inches deep. In terms of volume, it comes in under 40 Liters — it’s the smallest ATX tower I can recall handling in some time.

Our sample shipped in a plain unadorned box but the retail versions are better decorated. Included with the case is a decent assembly guide and a box containing a few zip-ties and the necessary screws separated and labeled for convenience. To make standoff insertion easier, they’ve also provided a nut-driver.

The S340 has a typical layout for an ATX tower with a couple of twists. A tunnel at the bottom of the case segregates the power supply from the rest of the system, and in doing so, helps hide all the thick ugly power cables. 2.5 inch drives have a pair of dedicated trays secured to the top of this tunnel, while up to three 3.5 inch drives can be installed underneath it. With no visible drive cages at the front, the intake vents are completely unimpeded which should be a boon for performance.

With no traditional front drive cages getting in the way, assembling a system inside the S340 is a breeze. While there are no tool-less install mechanisms, thumbscrews are provided to mount the expansion slots and drives. There’s also ample space behind the motherboard for tucking away excess cabling.

For our baseline noise tests, the system is left idle, the CPU fan is set to its minimum speed under PWM control, and the GPU fans are off by default. The system fans are connected to controllable fan headers and are set to a variety of speeds using SpeedFan. This gives us a good idea of what the stock fans sound like at different speeds with minimal interference from other sources.

Upon turning on the system, I was greeted by the ominous sound of hard drive vibration. The drive doesn’t fit well in the cage and the thumbscrews, no matter how well tightened, are insufficient to keep vibration effects at bay. Mounting the drive at the very bottom of the case proved to be even louder. The only way I could think of to steady the drive was to tape foam strips to the sides. This made it much more difficult to slide the drive into place but the extra tension settled things down considerably.

I also found that pushing against the front bezel helped mitigate some of the tremors caused by the hard drive. While it seemed failry securely attached to the frame, shoving a dense foam block into the gap made a measurable difference of 1~2 dB. For better aesthetics, the block can be pushed down into the hole until it’s no longer visible.

Though the modifications did help significantly, the baseline noise level with the CPU fan at minimum speed and everything else off is 16~17 dBA@1m, slightly higher than usual. The included fans start to contribute extra noise starting at near 40% speed (620 RPM). They stay reasonably quiet up to around 60% but get considerably louder past this point even with minor increases in RPM. 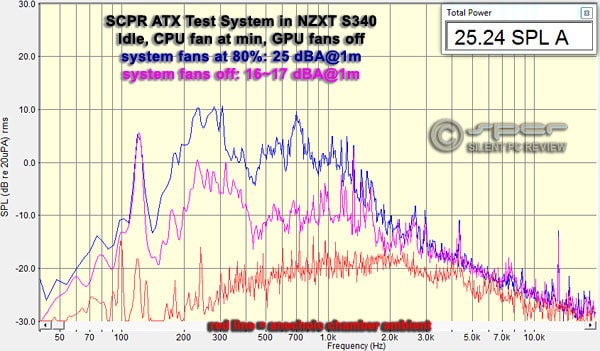 The subjective quality of the fans is excellent. The FN V2 is one of my favorite 120 mm case fans and it’s not hard to see/hear why. They have a supremely smooth acoustics with a mostly broadband profile. Most of the noise they add to the system are in the midrange, between 200 and 1000 Hz, with barely a hint of tonality, even at speeds of 80% and higher. If you care about how the system sounds, you’d be hard pressed to find a superior stock case fan.

For our system configuration, the stock fans running at 60% (910 RPM) produces the quietest result, 25 dBA@1m with the GPU fans at 43% speed. Increasing the speed of the system fans further results in only very minor differences in CPU and motherboard temperature. At 80% speed, GPU cooling does not improve enough to allow the video card fans to slow down, while at 100%, the case fans drown everything out. 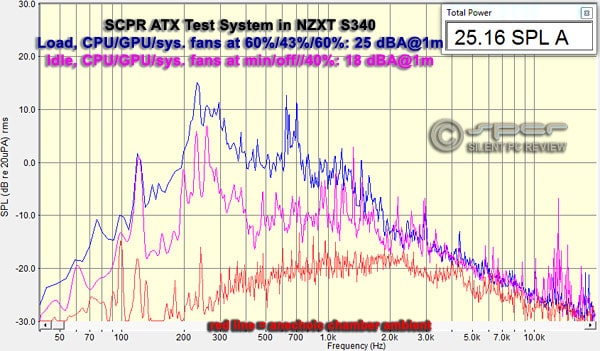 The noise emitted doesn’t differ much from what was produced during the baseline tests. The CPU and GPU fans generate a poorer acoustics than the stock case fans, but they don’t spin fast enough to change the overall sound of the machine. At the machine’s sweet spot, the noise output is about as pleasant as 25 dBA@1m can sound.

Compared to previously tested sub-$100 cases, the S340 is a middling performer, about on par with the Zalman Z11 Neo and Antec P100. This result is disappointing as its fairly open intake airflow design is not dissimilar to that of the Define S, which leads this pack of budget competitors.

The only thing I can think of that could be responsible for this discrepancy is the limited exhaust ports. The fan grill at the back is noticeably more restrictive than most cases and there’s only a single fan vent at the top. Almost all modern towers offer two fan mounts on the ceiling and this undoubtedly helps hot air escape the case more easily. This could have been enough to offset any gains from having unrestricted airflow coming in through the front panel.

Given the similarities with the Fractal Define S, I was expected great things from the NZXT S340. Without drive cages in the way, the two cases have effectively unimpeded front intakes. The Define S uses traditional vents along the sides of the bezel while the S340 opts for a large gap running down the entire front panel. Sadly, the S340 runs slightly warmer and moderately louder under our testing parameters. The difference may be due to S340’s more restrictive exhaust system or the Define S’ larger, potentially more efficient 140 mm fans (or a combination of both). Compared to other sub-$100 cases, the S340 is not a poor performer, it’s just not a standout.

From a silencing perspective, the S340 takes some user intervention to cut down on noise. Fortunately, the fans don’t have to be replaced as the stock models sound absolutely sublime. Hard drive vibration is the biggest issue as the drive cage isn’t particularly well secured and 3.5 inch drives fit too loosely inside. Adding some damping material to the sides of the drives helps considerably as does bracing the intake gap of the front bezel.

The S340’s aesthetics are simple yet classy and the external build quality is more than you can expect from a budget tower. Furthermore, minimal effort is required to make the interior look clean through the side window — the internal design hides the less attractive portions of the case and this is complemented by good cable management. The size of the case is also refreshing, not overly large like most models these days. Cutting back on drive support allowed NZXT to reign in its dimensions, though I wish they had made it slightly wider on the left side for better CPU cooler support. I hope one day they take it a step further and produce a microATX variant as the ATX form factor itself is oversized for the majority of PC users.

The S340 has its fair share of flaws but as it sells for only US$70, they can be mostly forgiven. It punches above its weight class, looking and feeling like a pricier model. That is about as much as you can ask for from a budget case.

Our thanks to NZXT
for the Source S340 case sample.

The NZXT Source S340 is recommended by SPCR