Carl Bohne, better known as Bluefront in the Silent PC Review Forums, has a thing about filters and ducts. He uses them to great effect in keeping his PC systems cool, quiet and dust free with a minimum number of fans. Carl is an inventive mechanical tinkerer with excellent shop skills in the best PC modding tradition. The Cookie Jar PC is his latest brainstorm. He says it is the quietest PC he has built yet, and probably the cleanest. 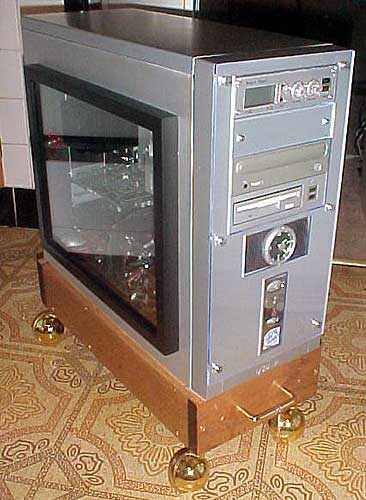 The new ventilation system in this case was designed for…

… but not necessarily with priorities in the above order.

Here are some photos, starting with the cookie jar that made this project possible. 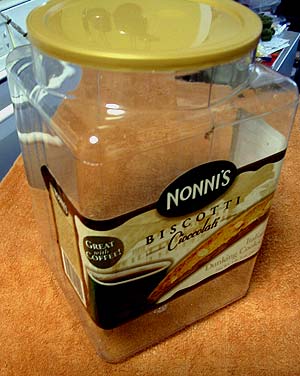 That cookie jar became a fan mount, air duct and hard drive silencing enclosure — all in one. It cost $10 with the cookies at Office Depot. I’ve since found similar plastic containers that would fit a 92mm fan, and some even smaller (at food stores).The neat part of this container is the square shape, which makes installation easy and internal fan mounting even easier. A shot of the jar “in action”: 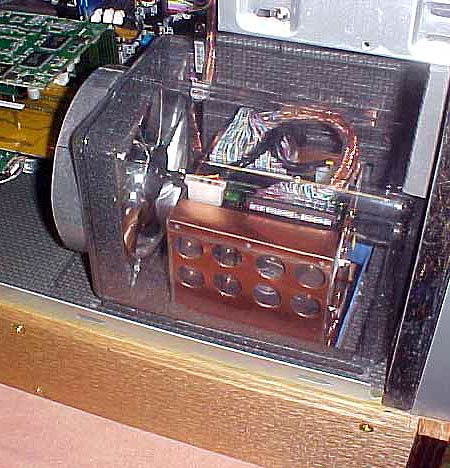 There is no case fan with this setup, only the fan in the cookie jar blowing in towards the PCI slots, and the 120mm fan in a modified Fortron PSU blowing out. The cookie jar fan, an Evercool 120mm aluminum fan, is manually controlled. The speed of this fan is normally set about 200 rpm higher than the PSU fan, which is a plastic body version of the same Evercool fan. I set the fan speeds this way to attain positive pressure in the case.

Where does the intake air come from? The bottom of the case, through the wooden chambered base, which has a vent on the bottom, then around the hard drives and through the cookie jar. 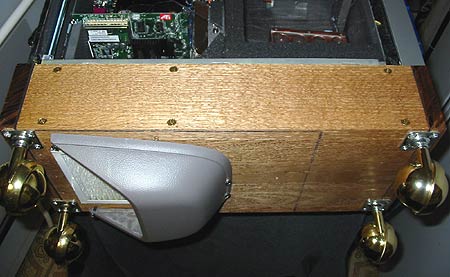 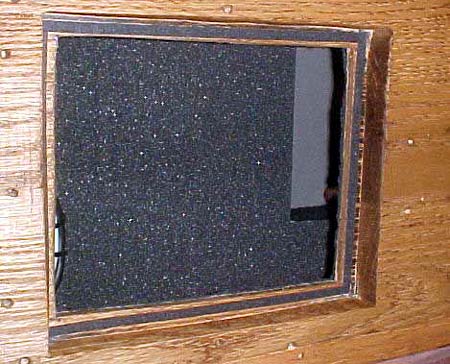 At the bottom intake vent is this excellent Hamilton Beach TrueAir model #04711 air-filter for a home air-cleaner unit. The 3M Filtrete filter turns the computer into a allergen reduction system and makes it the cleanest computer I ever built. Anyone who has opened their PC after even a few months knows how dust can cling to key components like heatsinks, whose cooling power drops when dust clogs the fin surfaces. My filter system eliminates that problem; periodic cleaning or replacement of the filter is all that’s needed. 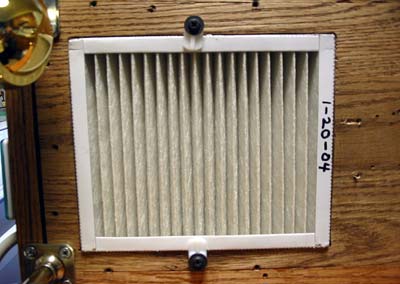 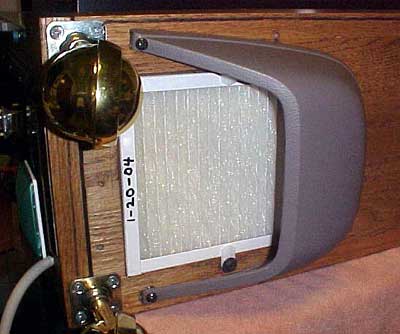 This oak box on castors is a compact version of the same wood box I constructed for my previous Lanboy project. This unit did not have to be quite so big as the Lanboy version, because the 120mm fan is not in the unit. It serves as a quiet padded duct, filter housing, and base for the HDD cage. At the very rear I installed an electrical outlet. At the front of the oak box is a cabinet drawer handle, making it easy to move the computer without getting fingerprints on it.

The main benefit of the wooden box is to provide a long damped tunnel through which the noise from the fan has to travel to get out of the intake opening. It also gives more room to work with, especially for the copper HDD cage.

My two Maxtor hard-drives are mounted in a copper cooling cage that is de-coupled from everything by sitting on the floor of the wooden case, on four foam feet. There is no other firm connection to either the computer case or to the wooden box that comprises the rest of the intake duct; the copper cage only touches the foam. The drives are always smack dab in the middle of the fresh air intake path. 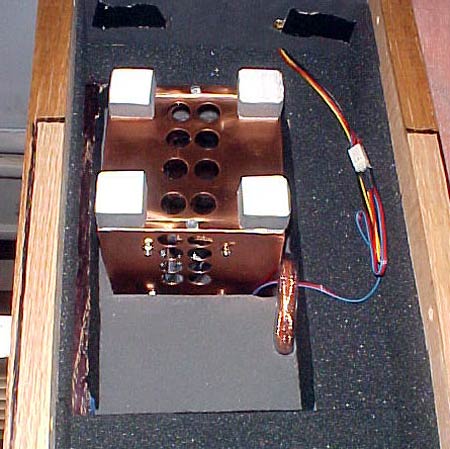 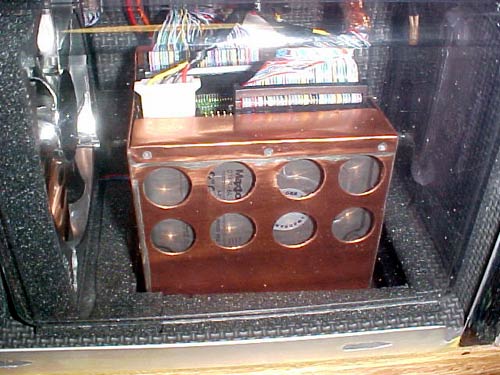 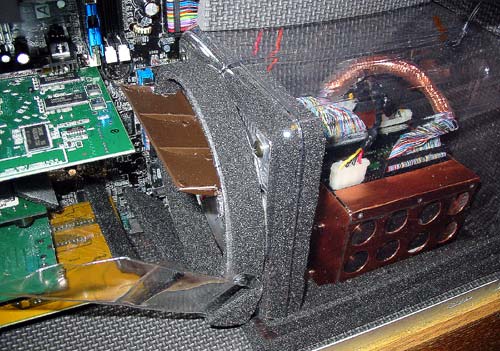 Preparing the cookie jar for this project was simple. I drilled four holes at the corners of the jar opening to mount the fan, cut out a hole in one of the sides, put a foam seal around this opening, and cut out a small notch for the IDE cable and power cable. That’s it. In my case, the cookie jar is not permanently attached, but merely wedged in by those insulation sheets shown in the photos. It could have been attached a number of ways; this was easiest and secure enough for my setup. 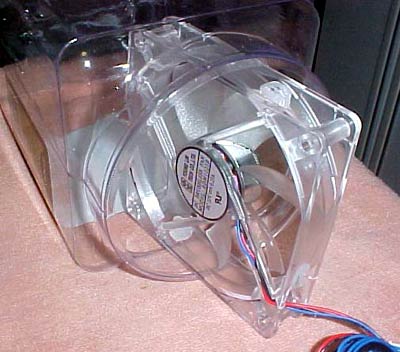 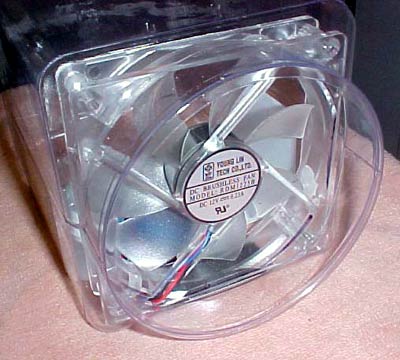 BENEFITS OF AN INTERNAL CASE FAN

The 120mm fan is in an optimal position to cool internal computer components. I installed a short plastic duct along with two louvers at the mouth of the cookie jar. (See three photos up.) This forces the air upward toward the AGP card, the large passive Heatlane Zen heatpipe-enhanced CPU cooler, the Northbridge heatsink… ultimately being sucked out of the computer by the bottom-mounted Fortron PSU fan. With a direct airflow, the Northbridge chip stays below 34°C, no matter how hot the CPU gets. 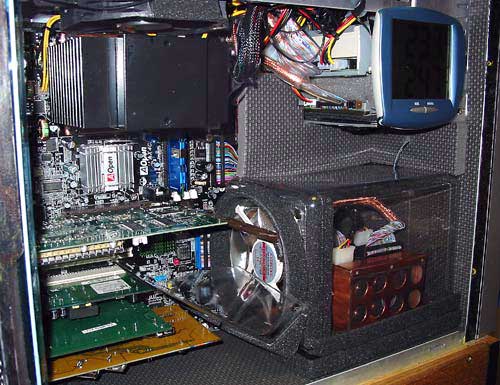 There are many benefits of an internal-mounted case fan.

The fan is well insulated acoustically from the outside. It is almost 18″ from the filtered input opening, which is at the rear bottom of the computer. The intake track under the case is lined with 4mm acoustic foam, and the airflow makes four 90 degree turns before it reaches the fan, making for an extremely quiet intake system.

The hard-drives are completely isolated from any internal case heat. And since they have ambient temp airflow over them at all times, they stay very cool, no matter what. In this unit with an ambient of 22°C, I have never seen either driver go over 34°C, and they’re quiet as a pin.

This internal case fan / cooling system complements the Heatlane Zen heatsink perfectly. It blows air upward through the Zen. But it could be also used with other heatsinks with similar results. The only problem one might have involves the specific case you are using. A case with a removable front bottom hard drive bay would be best. Otherwise you would have to cut it out.

The system is very quiet. How quiet exactly depends on the temperatures I am willing to run. If I leave the PSU fan and the cookie jar fan at 1400 rpm, the CPU maxes at about 50°C running CPUBurn stress testing. For normal use, I can set both fans about 1000 rpm: The CPU temp stays about 36°C, and I cannot hear it running at all. This is a heavily padded aluminum case, with two glass panes for the window and all the cracks sealed. It could be even quieter without the filter, as it does cause a bit of impedance, or if you slowed the fans a bit more and let things run hotter. 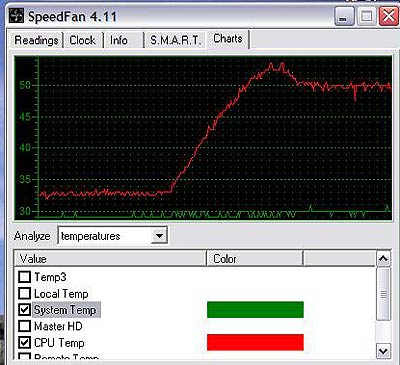 There are many benefits to this setup. It was easy to make, very cheap, and can be modified for different applications. Feel free to ask questions in the forums.

PS — A few more photos for the curious… 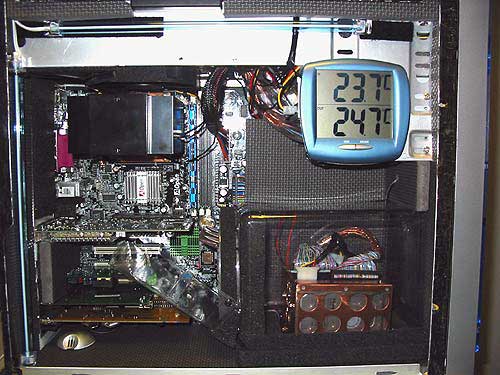 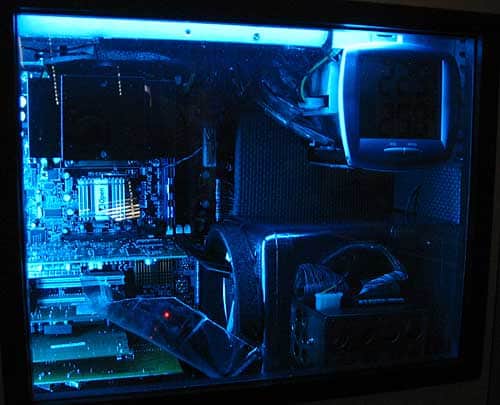 EDITOR’S NOTE: For a complete understanding and details of the evolution of Carl / Bluefront’s PC cooling and quieting methodology, I recommend reading through his previous articles, particularly the last: