SPCR readers know Phanteks primarily for CPU coolers and fans, and now they
enter the PC case market with the oddly named Enthoo Primo. It takes guts to
expand into a saturated market and serious cojones to do in this fashion. Rather
than dipping their toe in the water, they’ve jumped in full cannonball style.
Not only is the Primo an expensive high-end offering, its size is gargantuan.

At almost 10 inches wide, close to 28.5 inches tall, and 26.5 inches deep,
a total volume of nearly 98 liters, it’s substantially larger than most tower
cases currently available. In fact, we’ve reviewed only two case that are bigger,
the SilverStone
Raven RV01, and the Cooler
Master Cosmos II. The Primo isn’t as gaudy, however; the aesthetic design
is definitely understated. A similar case coming from a typical manufacturer
might have laser beams, metal spikes, or a fish tank compartment for all we
know. There is an odd structure on the right side that sits lower than the rest
of the chassis and sticks outward like an expansion that was added after the
fact. It either gives the case character or ruins the symmetry depending on
how you look at it. The black finish of the case is, of course, a fingerprint
magnet, and it’s especially noticeable on the brush aluminum front bezel.

The Enthoo Primo’s measurements conform to a design that focuses heavily on
water cooling versatility. Inside the aluminum/steel enclosure are a ridiculous
number of large fan/radiator placements, one on every side with sufficient space,
except for the windowed left side panel. There are also a couple of different
spots for installing reservoirs, as well as a dedicated pump bracket. Almost
everything else you can image in an enthusiast case is on tap as well. If you
like having plenty of fan options, the Primo offers 16 different placements.
Five 140 mm fans are included, all hooked up to a PWM controller that can power
up to 8 fans out of the box (11 total if you can get your hands on a few 3-pin
fan splitters). The case has blue light strips on the sidecar, running along
the top and front and they can be turned off/on, along with the front fans’
LEDs, with a single button. The obligatory removable drive cages and dust filters
are present as well. There’s even a spot for a second power supply if you’re
so inclined.

A first rate case ships with first rate accessories. Included are a full color
assembly guide, a dual fan radiator bracket for the right side panel, zip-ties
and velcro strips for tying up cables, a couple of dampening pads for a second
power supply, and a neat plastic box housing all the screws you’ll need in separated
compartments.

The internal construction is fairly solid as one would expect for a premium
model. Nothing on the inside of the chassis has any noticeable give, feeling
solid all the way around. The interior is laid out in such a way to support
a wide array of watercooling options, making it incredibly spacious to work
with.

System temperatures and noise levels were recorded with SpeedFan and GPU-Z
at idle, and on load using CPUBurn (K7 setting) and FurMark, an OpenGL benchmarking
and stability testing utility. 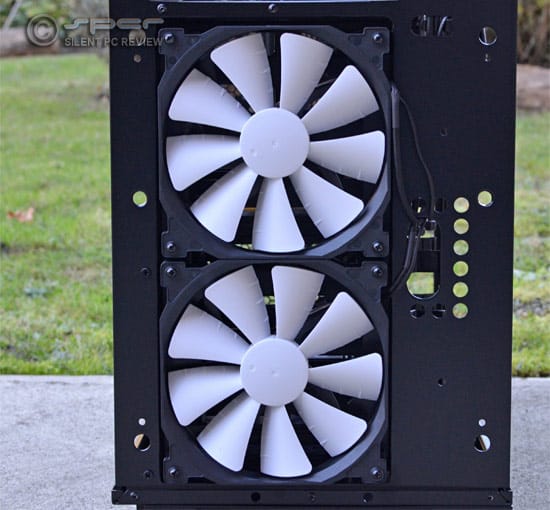 The main noise source within the Enthoo Primo are its five PH-F140SP 140 mm
3-pin fans, which are essentially identical to the PH-F140HP/TS
model that ship on some of Phanteks’ large heatsinks. This model currently provides
the best balance of acoustics and thermal performance of any 140 mm fan we’ve
tested.

Our CrossFireX HD 4870 configuration at idle measured just 20 dBA@1m with the
system fans disabled. We began testing the fans at 500 RPM which barely added
any measurable noise to the total level. 5~6 dB jumps were recorded when the
speed was ramped up to 800, 1000, and finally 1250 RPM.

Without supplemental cooling, our idle CrossFireX system generates a fairly
pleasant sound, and the included fans did not introduce any undesirable elements
to its acoustic profile. The last case we reviewed with fans that sounded this
smooth was the Antec Solo II which had just a single 120 mm TrueQuiet.
Fans placed horizontally often produce a clicking noise but the Phanteks models
were free from this issue.

As expected, hard drive vibration was problem, even with one drive. Initially our single WD hard drive created an audible resonance in the case but strangely, slightly nudging the drive tray made it dissipate significantly. The tray sits a little loose so if you get it in just the right spot, much of the vibration vanishes. Placing a foam block underneath or on top of the drive to help steady against an adjacent tray also seemed to help.

As an enthusiast case with massive size, it didn’t seem likely that anyone would purchase it for use with a single video card, so we jumped straight into our CrossFireX test configuration.

Idle temperatures were fairly comfortable with the exception of the chipset which resides in an unfortunate position, straddled by the two hottest components in the case, a pair of Radeon HD 4870’s. Still, with GPU fan speeds of about 1,100 and 1,000 RPM, and the case fans at just 500 RPM, the overall system noise level was fairly quiet.

We tested the system on load with three different case fan speeds: 500, 800, and 1,000 RPM. Going from 500 to 800 RPM produced the best mix of performance and noise. It cooled down the CPU and Southbridge/hard drive by 4°C and 2°C at the cost of 1 dB. Moving to 1,000 RPM generated a much smaller improvement that wasn’t worthwhile.

Interestingly, the system fan speeds had little effect on the cooling of the upper graphics card (GPU #1). It stayed at the same temperature and roughly the same fan speed throughout, though the card below it did see some minor relief. GPU #2 ran a little bit cooler and its fan slightly slower with each system fan speed increase. We surmise that the intake fans provided cooler air for GPU #2 but none of it reached GPU #1 as the front and bottom fans aren’t positioned high enough to have a direct effect on the top card.

At our optimal system fan speed, the Enthoo Primo produced internal load temperatures
similar to Cosmos
II and Antec
P280, but with a higher noise level than either one. It is somewhat
disappointing given the P280’s much smaller size, but much of the Primo’s extra
space is reserved for a watercooling system which isn’t part of our testing
procedures. All that allotted space sits empty, making the Primo’s fans and
overall cooling strategy less effective.

Our favorite feature of the Enthoo Primo is the fan control hub which provides
PWM control for multiple 3-pin fans. It’s an elegant alternative to the physical
knobs found on most high-end cases. The included fans have exceptional acoustics
but we wish Phanteks had used bigger 18 or 20 cm models as there is adequate
room in the huge case. The front fans could also have been positioned higher
to better cool graphics cards, but instead they give way to 5 x 5.25 inch bays
which are quickly going out of fashion. Having the front fan LEDs controlled
in conjunction with the exterior lighting is a neat idea though it would be
more practical to use regular fans and have an additional light strip running
around them. It’s a strategy designed to sell more of their LED fans.

There are nice touches not found in most of its competitors. The power supply
placement is not only isolated from the rest of the components, its side-mounted
orientation provides a more open intake point. If you happen to have a carpeted
floor, you won’t have to worry as much about the PSU fan begging clogged up
with debris. The 2.5 inch drive trays attached to the right side of the 5.25
inch bays is a clever use of otherwise wasted space. The velcro straps behind
the motherboard tray and the box of segregated screws brought smiles to our
faces. It shows a high level of consideration for the user experience.

The vibration-prone drive cages are our biggest complaint. Stacked atop each
other and secured to the 5.25 inch bays and case floor with thumbscrews, they
are firmly supported only in one plane. An outer support frame would make a
world of difference, but the modular design was necessary to allow front mounting
of a radiator. There’s another flaw close by — the removable reservoir
bracket has to be taken out if a graphics card of any appreciable length is
used.

The Phanteks Enthoo Primo isn’t your average oversized enthusiast tower. With
multiple installation points for reservoirs, radiators, and even a pump, the
Primo is clearly optimized for watercooling. We’re not talking about those integrated
liquid CPU cooling units but rather complete, custom loops. Given our inexperience
in this area and lack of appropriate hardware for testing, it’s tough for us
to properly judge how well the Primo works for its raison d’être.
What we can tell you is that if you assemble an all-air-cooled system, you will
not be making full use of the Enthoo’s extensive capabilities for water cooling.

Our thanks to Phanteks for the Enthoo Primo case sample.