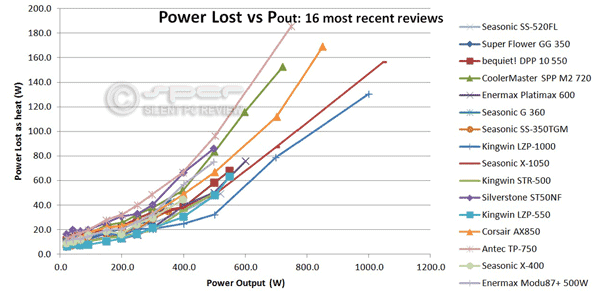 CA_Steve, an active member and a moderator in the SPCR forums, examined the 80 PLUS definition of efficiency as a % figure at different power levels, also defined as a % of the rated power of a PSU. Steve decided that this is too misleading and shows why power lost (as heat) is a better efficiency comparison tool. I’ve had the same thoughts for years, but Steve took the extra step of data-mining my/SPCR PSU reviews for the past half dozen years to demonstrate the above, and show various power efficiency trends and issues relevant for not only Silent PC enthusiasts, but anyone with a yen to minimize energy consumption.

The 80 Plus® certification program is great. It makes it easy for a PC
builder to choose between PSUs based on efficiency. With Energy Star 4.0 embracing
the baseline 80 Plus specification in 2007 for desktop PCs and stepping up to
80 Plus Bronze for Energy Star 5.0 in 2009, less efficient PSUs are now the
exception rather than the norm. Almost three-fourths of the ATX PSUs listed
at Newegg are 80+ rated. Of those, more than 4 out of 10 are Gold and Platinum
rated.

The increasing availability of higher efficiency power supplies at lower price
points has been a gift for silence enthusiasts. Higher efficiency means less
waste heat and the promise of quieter fan profiles, passive PSUs that aren’t
baking at operational loads, and semi-passive designs bringing the best of both
worlds. Now, PC builders need to decide how much more they are willing to pay
for incrementally higher efficiencies, and how best to compare power supplies
with different rated loads.

The latter issue came up in SPCR’s
discussion thread for the Super
Flower Golden Green 350W PSU review. 80 Plus criteria provide efficiencies
at percentages of the rated load. Power supplies are available in many wattages.
How do you easily compare the efficiency of a 500W Gold rated PSU to a similarly
priced 650W one? They might both be 91% efficient at 50% of rated load, but
the rated loads are different: 250W vs. 325W. How will they compare with a similar
load?

Perhaps a better way is to analyze power inefficiency (power
lost as heat) of supplies. Plotting power lost (in watts) vs.
load will enable the builder to directly compare PSUs of different ratings.
Here are the results from data mining past SPCR reviews.

First up, the 16 most recently SPCR reviewed PSUs: 350W to 1050W, Bronze to
Platinum, in one big eyesore of a chart. It’s a blob at 300W and below, but
look at the higher loads and the variation in power loss. At 500W (what you
might see with a high end Crossfire or SLI rig), the power loss varies from
32.5W for the Kingwin LZP-1000 to 96.6W for the Antec TP-750. In some of the
power supplies, you can clearly see the drop off in efficiency as it approaches
rated load. For example: the Kingwin LZP-550’s power loss curves upward starting
at 400W. Where it was in-line with the 1050W model prior to this, at 500W there’s
an additional 15W loss.

Next, the same data zoomed in to look at typical idle, low CPU utilization
and low power configurations. A new ATX desktop build can idle in the 20-25W
range. These PSUs vary in efficiency up to 10W. Even going up to 60W load, the
variance stays within 11-12W. A couple of things pop out:

While, in general, we can see the stratification of power loss by the grade
of PSU, what’s interesting is the variation within the categories. Case in point,
Gold supplies at 200W. The bequiet! Dark Power Pro 10 550 and Corsair AX850
have 23W loss. At the other end, the Seasonic X-400, SS-350TGM and G-360 come
in at 17W. This 6W amounts to 3% range in efficiency. Move up to Platinum, and
the variation at 200W is down to a 3.5W variation.

To get a better look at efficiency improvements over time, the next series
of charts compares all of the Seasonic (and made by Seasonic) PSUs reviewed
since 2006. Bronze vs. Gold/Platinum performance clearly stands out.

Zooming in to idle and lower power use, Bronze parts (S12, M12, and Corsair
HX) have idle power loss of 10 to 22W with a big gap between the 430W and the
520/620W. The 350-650W Gold units stay within a ~5W spread at idle as well as
over this power range. The newest model, Platinum rated SS-520FL, idles along
with 8.5W of heat loss, and is fairly flat through this range. It’s still outperformed
by the little SS-350TGM TFX supply which rocks this chart.

For higher power loads, Bronze vs. Gold is pretty clear cut. The average Bronze
rated PSU uses 10W more at 100W output, 15W more @ 200W, and 25W @ 300W. It’s
interesting to look at the efficiency crossover for the lower rated output Bronze
supplies vs. the higher ones. At 100W, the 380 and 430W are more efficient than
their higher wattage brothers. Between 200W and 260W they cross over and are
less efficient than the 520/620W versions.

For the Gold supplies, the newer designs (G-360, SS-350TGM) outperform the
older X-400 by a bit. The variation between models in power loss over this range
is about 6W. Finally, the Platinum 520FL performs similarly to the G-360 and
the 350TGM up until 250W load and higher, where the lesser wattage PSUs’ efficiency
decreases as they approach their rated power.

By looking at power loss at a given load, we can easily compare
one power supply’s efficiency to another, regardless of their rated power. For
silent PC enthusiasts, less power lost as heat can lead to a lower fan speed
profiles and quieter systems as well as passive PSUs that aren’t baking in their
own juices.