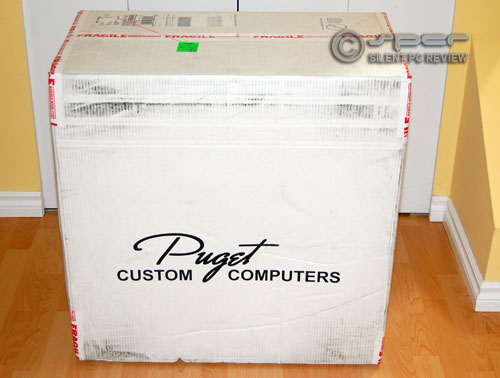 Puget Custom Computers joins the SPCR-certified PC program with Serenity, a powerful Intel i7 system that idles at just 14 dBA@1m.

Puget Custom Computers is not a newcomer to SPCR. Back in 2005, Puget sent
us a Pentium M system system that was passively water-cooled, very speedy for
its day, expensive, and as low in SPL as we could measure back then. The next
year, we reviewed a more conventional C2D PC from Puget that was nearly as quiet
as the previous system but far less costly. Both of these systems were impressive
in their neat, tidy execution, attention to detail, and the secure quality of
their packaging.

The Antec CP-850 is a unique extremely quiet power supply designed specifically
to work in the P183 case, and all the fans (except for the 120mm stock fan on
the Traquilo cooler) are proven Scythe S-Flex models. The component choices
are well thought out, and the end result should be a very quiet, speedy computer.

The sample system came in a huge box. The PC was inside a second carton, the
original carton of the Antec P183 case, with shock damping on the corners. The
double-boxing and double shock-damping made this Puget PC virtually impossible
to damage in transit. Finally, the interior of the PC was also packed full with
custom-fitted foam to ensure that no internal components can get loose in transit.

The Puget Serenity looks no different on the outside than any other in an Antec
P183 case. The looks of the case are basically minimalist, with some stylized
front vents to ensure excellent airflow even with the front door closed. By
today’s gaming box standards, it’s not particularly big, although it is a bit
larger than the generic mid-tower.

It’s inside where Puget’s custom work really shows up, starting with the AcoustiPack
acoustic damping that lines much of the interior panels.

The basic approach is to assess the noise, thermal and power characteristics
at idle, and then at full CPU and GPU loads. The testing was conducted entirely
in the SPCR anechoic chamber, with the door open to ensure adequate room ventilation
when noise measurements or recordings were not being performed.

This is a very quiet computer system. The measured sound pressure level of
just 14 dBA@1m at idle and 18 dBA after an hour at full system load is about
as low as we’ve measured. The ISO 7779 computer noise standard’s defined "Seated
User Position" SPL places the microphone about 0.6m away from the top/front
of the PC, which explains the 2 dBA higher readings. This is an unrealistically
close distance for a PC in a case as large as the Antec P183, which is designed
for placement on the floor; few users would put it on top of the desk.

The source of the increased noise at load was the CPU fan, which went from
about 680rpm at idle to 1030rpm at full load. Neither the exhaust or the intake
fan changed speed during testing; a calibrated strobe light showed both fans
to be spinning at 750~760rpm. The fan in the power supply also did not change
speed or noise throughout the testing. At idle, the PC is quiet enough that
the ambient noise level in almost any normal room will mask it and make it
inaudible. In the anechoic chamber, you have to get within about two feet
of the front panel to hear it at all. In a carpeted 20’x10′ office, when set
atop a desk two feet away from the keyboard and monitor, the noise is audible
as a smooth, low level, broadband sound with a touch of tonality in the lower
frequencies. When accessed, occasional chatter from the the hard drive can
be heard, but at a very low level, with peaks getting no higher than 1 dBA@1m
above the norm. Placed on a carpeted floor under a desk, any noise from the
PC becomes difficult to discern.

This recording was made with a high resolution, lab quality, digital recording
system inside SPCR’s own 11 dBA ambient anechoic chamber, then converted to
LAME 128kbps encoded MP3s. We’ve listened long and hard to ensure there is
no audible degradation from the original WAV files to these MP3s. It represents
a quick snapshot of what we heard during the review.

The recording starts with 7 seconds of ambient noise, followed by 10 second
segments at various states. For the most realistic
results, set the volume so that the starting ambient level is barely audible,
back the volume control off a touch to make it just inaudible, then don’t
change the volume setting again while comparing all the sound files.

The temperatures of the various components stayed ridiculously low throughout
the testing. Despite its low noise, this PC is very well cooled. There is
at least 15°C headroom for every component; in other words, even at 35°C
ambient temperature, all the components would remain cool enough to keep running
at full load. Under such conditions, the CPU fan can be expected to rise beyond
1030rpm, as it is controlled by the Q-Fan controller in the BIOS of the Asus
motherboard, set to "Silent" mode. Exactly how much louder it will
get is not possible to determine without a hot room capable of 35°C. Suffice
it to say the overall noise cannot go above ~25 dBA@1m, which is the measured
system SPL when the CPU fan is set manually to its maximum speed of ~1,500rpm.
Puget expressly states that this PC is designed for quiet operation in an
ambient of up to 30°C.

The idle state AC power consumption of 70W is fairly modest for a system
with the computing power of an Intel i7-860 CPU and the graphics capability
of the ATI HD5750, a mid-level gaming card. While the maximum CPU/GPU load
power of 240W will not win any green prizes, it’s apropos for a system with
these components. The AntecCP-850’s efficiency is shy of the best, but it’s
quite good, nearly 85% at the 240W AC power draw level (according to our
own review). More moderate use, such as playing a 1080p HD video, barely
riased the power level 15W over the idle.

No conventional performance benchmarks were run on the system. The high performance
characteristics of the Intel i7-830, the ATI HD5750 video card and the Intel
SSD are all very well documented in dozens of tech web sites. For reference
sake, the Windows Experience Index was a high 7.3. There were no problem of
any kind encountered during our testing. Windows 7 Home Premium 64-bit provides
a mature, smoothly operating environment, with full access to the 4 GB of
installed RAM. The quick boot time of under 35 seconds (from power button
press to actual usability at the desktop) made possible by the Intel SSD was
nice to see, as well as the effective and quick sleep mode, where the minuscule
3.4W power draw makes powering the system off/on almost completely unnecessary.

The Puget Serenity is a welcome addition to SPCR-certified silent PCs. It is
a carefully crafted high performance computer that compares well with any other
computer of similar components in mid-2010, with an acoustic footprint that
is very small. The noise of this system will hardly be audible in many environments,
and certainly not in any ordinary office. At the same time, the Serenity is
as well cooled as any PC around, which bodes well for a long and stable usable
life.