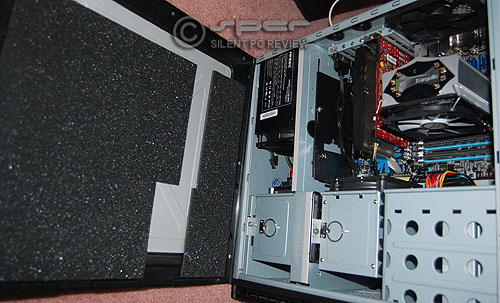 In the few months after the Serenity was SPCR-certified as a silent PC, Puget went back to the drawing board to make the i7 PC even quieter. The development team made changes to fans, subtle improvements to the chassis, a series of small upgrades in other components, and perhaps most importantly, resorted to binning (like the big boys) to cherry-pick only the quietest components off their shelf for the SPCR edition. This second sample that we just finished testing is nothing short of marvelous.

The customized Serenity
system Puget submitted for SPCR-certification
in June proved to be an extremely quiet high performance computer. In the few
months since that review, Puget went back to the drawing board, tweaking and
refining the Serenity SPCR Edition for even quieter peformance. In the
process, some improvements for performance were also made. The table below details
the changes and commonalities.

The fundamentals are the same, with the same type or series of components.
Unchanged are the motherboard, video card, and case. The CPU speed got bumped
a bit, the amount of RAM doubled to a whopping 8GB, the HDD capacity went up
by 500gb, the PSU’s maximum power rating went up to 1000W, and the optical drive
is now a Blu-ray player. Most of these should lead to higher performance, with
the exception of the PSU rating change. That might increase longevity, but probably
not, as the original machine only pulled 240W maximum from the wall, which translates
to a DC load of under 200W or just 23% of the 850W rating of the original PSU.

The only significant component change that would impact noise is the move to
Scythe Slipstream 120 fans across the board. This time, the fan on the Gelid
heatsink is also changed. In our own reviews, SPCR has noted that the Slipstreams
sound smoother and quieter at similar RPM or airflow compared to the S-Flex
(and most other fans). We’ll see what impact this has on the overall noise.

Here is a note from Puget about the changes:

1) We’ve now made a custom plastic plate for blocking the top vent.
It’s just more polished, but also blocks the sound a tad bit better. We had
to make a ton of them to make them economical, so we
sell them now too!

2) We’ve updated all chassis fans to Scythe Slipstream 800rpm, at 5V.
We did a LOT of testing, and we’re very happy with the temperatures, and are
confident that we’re not going to find much quieter than this! Temperature
logs are provided in the packet with the PC we’re send you, though I’m sure
you’ll be testing yourself.

3) We’ve updated the CPU fan to Scythe Slipstream PWM. We have gone
through the BIOS, and instead of relying on the default "Silent"
QFAN profile, we have custom tuned the fan ramping curve to provide the lowest
noise levels while maintaining good temperatures. We also tuned it to prevent
cyclic patterns of the fan ramping up and down. We keep it nice and smooth,
and in fact, our full load speed is only 30% higher than our idle speed. We
have this VERY well dialed in.

4) For the SPCR edition, we
are now cherry picking components from our shelf that are the quietest. We’ve
found that even with the same model of component, there are variations in
noise level. Hard drive spindle noise, power supply fan noise, motherboard
electrical noise (we’re so quiet now that that’s one of the loudest items!)…
we set aside the quietest components for SPCR packages. We’re branding this
"Picked by ear." (Editor’s note: This could be as significant
as the change in fans!)

5) We’ve done some minor power management tuning in Windows 7. None
of it is necessary to ensure quiet operation or good temperatures. We wanted
to make sure customers get the same experience even if they reinstall the
OS. Mainly, we’re just decreasing the inactivity time before the secondary
drive spins down.

6) All this with no increase in price!

Everything else about the system is the same as in the original Serenity, so
there’s no point going over those details again. Please refer to the
original Serenity review for details on the great packaging, documentation,
external cosmetics, etc.

It’s inside where Puget’s custom work really shows up, starting with the AcoustiPack
acoustic damping that lines much of the interior panels.

The basic approach is to assess the noise, thermal and power characteristics
at idle, and then at full CPU and GPU loads. The testing was conducted entirely
in the SPCR anechoic chamber, with the door open to ensure adequate room ventilation
when noise measurements or recordings were not being performed. Measurements
under load were recorded 60 minutes after the tests were started. This is an
artificially long time for both CPU and GPU to be at full 100% load; it would
hardly ever happen in acutal use with real applications.

The new Puget Serenity SPCR Edition is silent at idle. The
measured sound pressure level of 11 dBA@1m at idle and not quite 13 dBA at
full system load puts it at the same level as any fanless PC with a single,
super-well muffled hard drive. Compared to the original sample tested three
months ago, this system is obviously quieter, at idle and especially at full
load; subjectively, the 5 dB difference is perceived as about a 50% increase
(or 33% decrease). To put it another way, the new system is quieter at full
load than the original system was at idle. That’s pretty impressive, especially
as the original was extremely quiet.

At idle, it’s really hard to tell that the system is on using only sonic
cues, even sitting next to it (with the system on the floor as it should be).
The subjective impression (compared to the original) is of significantly reduced
hum at idle, and much quieter overall at full load, when the overall noise
is still barely audible. Compared to any other fan-equipped PC we’ve encountered
or even assembled ourself, this one is quieter.

Audio Recordings of this system were not made. There is no point.
It is virtually silent in the anechoic chamber and it will be silent in almost
any environment.

The various components stayed well under maximum safe limits through the
CPU load testing, but they ran significantly hotter when both CPU and GPU
were fully loaded. The maximum speed of the CPU fan dropped from 1030rpm in
the previous version to 880rpm in the current configuration. They are different
fans, and do not necessarily have the same airflow at the same speed, but
it’s clear the new fan at 880rpm does not move as much air as the previous
one at 1030rpm. In any case, despite higher overall temperatures, the components
temperatures remained safely below maximum limits.

Puget expressly states that this PC is designed for quiet operation in an
ambient of up to 30°C. This is a fair statement under normal use conditions.
Under such conditions, the CPU fan will probably still not rise much beyond
880rpm, as it Puget has custom-set the fan controller in the BIOS.

The idle state AC power consumption of 70W is fairly modest for a system
with the computing power of an Intel i7-875 CPU and the graphics capability
of the ATI HD5750, a mid-level gaming card. While the maximum CPU/GPU load
power of 260W will not win any green prizes, it is apropos for a system with
these components. The 20W increase from the original system at the same max
load is somewhat expected due to the higher clock speed of the CPU and the
increase in RAM. The AntecCP-1000’s efficiency is shy of the best, but it’s
quite good, some 85% at the 260W AC power draw level. More moderate use, such
as playing a 1080p HD video, barely raised the power level 15W over the idle.
Finally, the power difference at load can also reflect sample variance in
the components of the two systems. (Rarely are two components identical.)

No conventional performance benchmarks were run on the system. The high performance
characteristics of the Intel i7, the ATI HD5750 video card and the Intel SSD
are all very well documented in dozens of tech web sites. There were no problem
of any kind encountered during our testing. Windows 7 Home Premium 64-bit
provides a mature, smoothly operating environment, with full access to the
8 GB of installed RAM. The quick boot time of under 35 seconds (from power
button press to actual usability at the desktop) made possible by the Intel
SSD was nice to see, as well as the effective and quick sleep mode, where
the minuscule 3.4W power draw makes powering the system off/on almost completely
unnecessary.

The new Puget Serenity SPCR Edition is totally unique in at least one aspect:
The use of components cherry picked (or binned, to use an well-known industry
term) for lowest noise. This unique selection service, the replacement Scythe
Slipstream fans, and the tweaks and refinements for improved noise combine to
make our second Serenity sample the quietest fan-equipped PC we’ve ever tested
— or even built for ourselves. It bears comparison even with PCs that have
no moving parts; some of them will actully have more electronic noise (high
pitched, sometimes intermittent whine) than the Serenity. Our hats are off to
the Puget development team for their pursuit of excellence. Puget’s SPCR-certified
Serenity PC is a truly well-crafted high performance computer at the cutting
edge of silent computing.