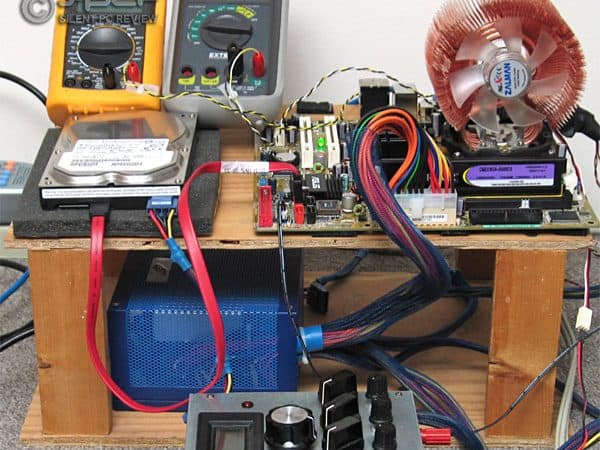 Assembling, testing, and tweaking PC hardware can be a fulfilling experience or a lesson in frustration depending on how things go. Regardless of the outcome, we can agree that anything to make the process more convenient is a welcome addition, whether you’re a home hobbyist, a hardware reviewer, or a professional system integrator. Enter the test bench, essentially an open air case, that allows one to fully assemble a system while being able to easily access each and every component. It’s great for quickly checking compatibility, investigating potential hardware defects, and benchmarking.

At our labs we use several rudimentary wooden platforms, essentially two boards, one for the motherboard and one for the power supply, held together with four pillars, all screwed together. Foam is used to mitigate hard drive vibration and to dampen the motherboard in case the CPU fan rocks it. Nothing is tied down in case components need to be switched though it does mean we have to be extra careful when carrying it from location to location. Once in awhile we forget to unplug a cable and try to move it, usually without any damage aside from personal embarrassment. It’s not the most elegant solution but it is cost effective. Some manufacturers sell metal test benches that perform a similar function with better component security but really the only big name that has dabbled in this niche is Antec with its Skeleton series.

Puget Systems, the renowned pre-built and custom PC seller, perhaps best known for their SPCR Certified Quiet/Silent Serenity series, has a wealth of experience in the field. Claiming to be dissatisfied with the test benches currently available on the market, they’ve produced one of their own design. The Test Bench EATX V1 DIY Kit is not simply a utilitarian tool however, but a high-end US$175 test platform constructed of acrylic panels. Its transparent composition lets in and refracts light, giving it a happier disposition than the average cold sterile metal bench.

It is rather large thanks to a 120 mm rear fan mount and EATX motherboard support stretching its dimensions to an almost cubic 37.0 x 38.7 x 36.0 cm (H x W x D). If it were enclosed, its total volume would be 51.1 Liters, equivalent to a smallish ATX tower. Despite its large proportions, official support is limited to only 1 x 5.25 inch and 2 x 2.5 inch drives.

As the kit comes unassembled, it ships in a plain, thin, rectangular box, a smaller version of something one would pick up at Ikea. The acrylic panels are wrapped tightly in white foam sheets to prevent them from being scratched during transport. The rest of the components include all the nuts and bolts required for assembly, the standoffs and screws for mounting PC components, a large I/O shield, a set of round rubber feet, a power switch, power and hard drive activity LEDs, an internal PC speaker, and a large foam dampening mat.

Assembling the test bench is fairly straight forward but it’s an arduous task that thankfully only has to be performed once. The thick acrylic panels that make up the platform are affixed to one another with a total of 25 interlocking nuts and bolts, and an additional 12 screws are used to secure the I/O shield.

As an open air platform, the Test Bench allows users to easily access each and every PC component. Each part can be simply placed on the platform without any support or screwed down, but for US$175, one might expect a tool-less system that gives the best of both worlds.

In the lab, we place our temporary systems on basic wood and screws contraptions that do little to keep the components in place. They’re not at all secure to transport but the transient nature of the hardware used in our work demands something where components can be swapped out at the drop of the hat. While Puget System’s solution is an obvious upgrade from this, for our purposes, it’s only functional benefit is the fan mount at the back which can come in handy when testing enclosed liquid CPU coolers on an open test bed. The Test Bench Kit is not targeted at us however, but to home enthusiasts that probably don’t switch things in and out on a daily basis. For this audience it makes more sense to have a more permanent mounting solution, we just wish they could have found a happy medium in this regard.

Assembling the platform itself is not complicated but it is an exercise in tedium. It takes 25 bolts and accompanying nuts to put together, then another 12 screws to attach the black I/O panel, which incidentally clashes with the acrylic, tarnishing its otherwise clean aesthetics. Putting together a system is more convenient than the bench itself, but a tool-less assembly system would have made for a much more pleasant experience. For US$175, at the very least, they could’ve included some thumbscrews. The motherboard can be “secured” without screws but the included pegs are too few to provide anything more than tenuous immobilization of a full-sized board.

For its size, one would also expect a proper 3.5 inch drive mounting option. It’s a glaring omission, especially considering the ample room underneath the motherboard tray. You can of course, simply place a 3.5 inch drive on top of, or next to, the optical drive, but it’s a sloppy arrangement considering how everything else is secured. A slab of wood would do just as well if were simply going to lay components down willy-nilly. Enthusiasts that experiment with multiple GPU configurations may also be disappointed as such setups often require more than seven expansion slots.

Ultimately, functionality is not what will sell this product though. Test benches can only do so much — they are supposed to be basic barebones structures, rather than fanciful assemblies of acrylic panels. It’s obvious from the get-go that the Test Bench Kit is a luxury, a piece of US$175 bling for hobbyists to admire and show off, rather than a practical tool for making DIY computing more convenient than a typical test bench. For this demographic it’s probably enough that the bench is well-built, performs its function adequately, and looks great doing it.

Our thanks to Puget Systems
for the Test Bench EATX V1 DIY Kit sample.