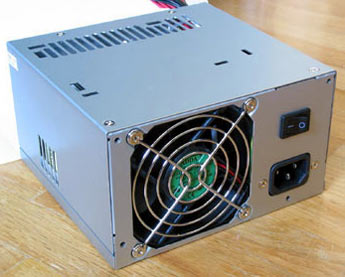 Long considered the quietest PSU on the market, Q-Technology has now discontinued their original 230W model and offers 250, 300, 400 and 460W models. We examine one of their 300W models. Does it continue the Q-Technology tradition? How does it compare with quiet PSU models from other manufacturers?

The original Q-Technology 230W power supply unit developed a mystique as a very quiet PSU at a time when it had no competition at all. Despite its plain-Jane appearance and high price tag, lots of enthusiasts were apparently swayed by the promise of quiet. Some commercial builders also utilized the Q-Technology PSU in their early quiet PC systems.

Now, with power hungry Intel P4 and AMD XP processors in dominance, Q-Technology has discontinued the 230W unit in favor of 250, 300, 400 and 460 watt models. The new models are said to carry on the quiet tradition of the original. Silent PC NL / CG Consultant BV in the Netherlands is the distributor of Q-Technology products, which are manufactured in one of the large Far East power supply factories. CG Consultants BV arranged to deliver a sample of the QT-02300 300W PSU through their Canadian agent, QuietPC.ca.

There is some confusion about different Q-Technology models, some of which are reportedly louder than others. On the Silent PC NL / CG Consultant BV web site, 6 different models of ATX power supplies are listed, all with different model numbers. One SPCR reader described another model, ATX-1125BTA QT. The fan in this 300W model is said to start off quietly, but exhibits typical thermistor-fan behavior by speeding up and becoming noisy in normal use. In response, Michael van der Jagt of Q-Technology wrote,

Most web retailers currently sell the Q-Technology QT-02300 for around US$76 (or equivalent). The review sample came in a retail display
box without a manual. 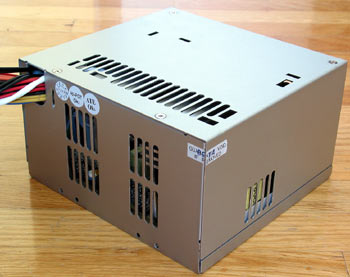 As the photos above show, the QT-02300 is nicely finished with a proper wire fan grill for minimal air blockage and turbulence. The air intake slots on the side that normally faces the CPU and the front are surprisingly minimal, a bit reminiscent of the original Zalman PSU (ST300 BLP). It sports Active PFC, like the previously reviewed Zalman and Seasonic PSUs. (For details on Active PFC, see the text box entitled POWER CORRECTION FACTOR on the first page of the Zalman PSU review.) One of the benefits of Active PFC is automatic adjustment to any AC input voltage from 110V to 240V — note the absence of the typical voltage selector.

A label on the side of the unit provides details of current capacity for the various voltage, along with a confusing statement: Select the right voltage! Hmm. As already mentioned, there is no voltage selector.

One other statement, With fan control, means the fan speed is controlled by a thermistor. 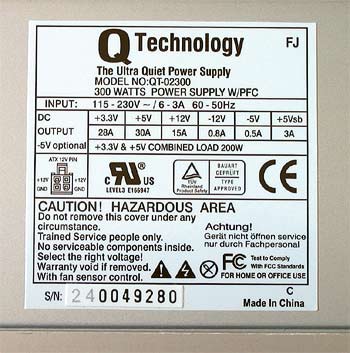 The X in the model number indicates use of the patented Hypro bearing, which ADDA claims reduces friction and noise, and prolongs service life. The GL designation further indicates low noise, which may have to do with the geometry of the blades. The rated noise is relatively low for the specified air flow. In free air, run at 12V, the ADDA fan sounds smooth and free of obvious bearing noise, but not nearly as quiet as the 21 dBA SPCR reference Panaflo 80mm “L” fan, which spins slower and pushes considerably less air. Note that in the PSU, the fan is not run at 12V but at under 6V. It is much quieter at this reduced voltage. It is the quietest fan we’ve encountered in a PSU after examining more than a dozen. 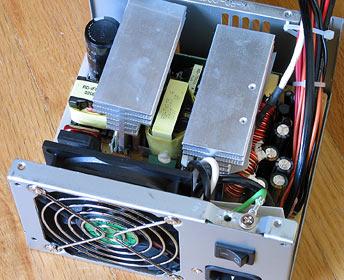 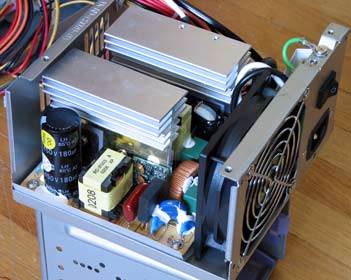 There are good-sized
large heatsinks and the PCB wiring looks good. The thermistor for fan speed control could not be identified; one assumes it is attached somewhere close to the large coils or hidden from view on a heatsink.

This information is from the website of CG Consultant BV.

The electrical efficiency is specified as 65%, a typical figure. In theory, this means the unit requires 154W in AC power to provide 100W in DC voltage output to components in a computer, and the remaining 54W is dissipated as heat.

The DC output specifications are consistent with those
for most quality 300W PSU. The combined power of 200W for the +3.3V and 5V lines is a bit more generous than most.

The Q-Technology QT-02300 was installed in the same system used for other PSU reviews. It is a stable, (normally) very quiet, low airflow PC running Windows 98SE:

Motherboard
Monitor 5 enables monitoring of temperatures and voltages off motherboard
sensors. With the P4 diode, it
is usually accurate within 1° C. The Veriteq
Spectrum 1000 will be familiar to anyone who has read other articles on
this site: it is a highly accurate data logger that samples temperatures via
its probe. For all PSU temperature measurements, the probe was lodged next to
the the larger heatsink. The voltage to the fan was monitored using the Heath, an ordinary
multimeter that has proven to be fairly accurate. Kill-A-Watt
Power Meter was used to measure total system power
consumption in Watts.

The Heath AD-1308 is a portable half-octave Real Time Spectrum
Analyzer with sound level meter (SLM) functions. Below 40 dBA, its accuracy is limited to
3 dB increments, down to 23 dBA. Some 15 years old, this LED-based unit has
long since been displaced by digital devices with better interfaces to PCs.
(Shown on page
3 of the Seasonic PSU review.) The “A” weighting was used,
as recommended by numerous acousticians; it most closely approximates the frequency
response characteristics of human hearing.

The microphone on the sound meter was positioned about an inch
to the side of the PSU fan exhaust to avoid fan turbulence in the microphone
itself. The dBA obtained here cannot be compared to any other measurements due
to the lack of adherence to a repeatable standard and the uncontrolled reflective
environment.

No effort was made to change acoustics in the lab, which is a small room measuring
12 by 10 feet, with an 8 foot ceiling. The PC sits on the bare hardwood
floor, under a table on 4 legs that supports the monitors.

NOTE about Room Temperature: For comparisons against the data in our other PSU reviews, please remember to factor in any ambient temperature differences. The test environment is not air-conditioned.

The QT-02300 starts at a very quiet level. The noise is
smooth, consistent and has little high pitched content. It is ever so slightly quieter than the Zalman or Seasonic competitors reviewed here. This noise difference could not be confirmed with the SLM which lacks the necessary resolution; it is probably 1-2 dB or less, even from less than a foot away. The QT-02300 is louder than our virtually inaudible reference power supply, which run Panaflo 80mm “L” fans at ~4.5V.

Aside from fan noise, there is also a small amount of
coil whine, which varies from inaudible to plainly audible with the test platform PC on the floor under the desk, several feet away from my ears.
The whine does not seem related to load, and may be result of some type of conflict between the video card or motherboard and the PSU. The whine was considerably subdued on an AMD XP test platform.

The following table shows measurements from boot to 60 minutes, with the system
idle, .

CPU Stability Test by Jouni Vuorio
is a useful tool to stress systems. Here are the results over 45 minutes of
CPU stress testing, begun after the system was turned off, allowed to cool to ambient, then restarted. System power stayed at a constant 128W. The room ambient
was 26° C.

The measured noise difference between start and finish was 1 dBA.
This is an approximation, as +/- 1 dB is the resolution of the SLM.
Subjectively, the sound level of
the PC at the end of this test was not higher than at the beginning.

Q-Technology vs Zalman vs Seasonic

The CPU Stability Test results are considerably different from that obtained
with the Zalman ZM300A-APF and the Seasonic SS300-APFC. Referring to the CPU Stability Tests on
the other PSUs,
the following is a comparison of results at the end of the 45 minute CPU stress
test:

*The first figure is the measurement at the start of the stress test; the second is at the end; the third figure is the percentage gain between start and finish.

Notes on the comparison:

Keeping these factors in mind, the comparison suggests that

The Q-Technology QT-02300 sports the quietest fan we’ve encountered in a PSU so far, by a small margin. This may be the key to the original Q-Technology’s quiet mystique. No doubt this aspect of its performance will please whoever seeks it out in search of a quiet PSU.

The coil whine exhibited may be unique to this sample or to the combination of the components in the test platform. This test platform did cause excessive coil whine in Antec PSU samples as well. In future, the sample will be tried on another system, and results will be reported here as a postscript.

The concerns about heat are somewhat allayed by the promise on the manufacturer’s website of “100,000 hours MTBF (mean time between failure) at 75% of maximum continuous output loading at 25° C ambient conditions.” (Of course, the statement begs the question of which ambient conditions — in the room or in the case?) To the question of heat, Michael van der Jagt of Q-Technology’s distributor, CG Consultant BV, responded:

The critical components such as semiconductors and transformer can withstand about 120° C. A temperature of 55° C inside is no problem for the
power supply.