The Enermax EG-365P-VE is a popular example of a thermistor-controlled, dual fan PSU. Despite the promise of whisper, its performance in the noise arena is ordinary, and it usually becomes one of the 3 core noise sources in a typical PC. This hands-on article shows how to reduce its noise output so that it is just a whisper, barely audible from even just a couple of feet away. The basic methodology can likely be applied to any PSU with a thermistor-controlled fan that is too noisy. But be careful of high voltages!

Some ATX power supply units (PSU) for computers are equipped with two fans, one positioned normally to blow air out of the unit (and the PC), and another fan positioned so that it draws air from within the case onto the heat sinks in the PSU. Many power supplies are equipped with thermistors that control the voltage fed to the fan so that it speeds up only when internal temperature within the PSU rises. These units are often tagged or advertised as being noise controlled or noise-reduced. Some power supply units have both dual fans and thermistor control.

The Enermax EG-365P-VE is a popular example of a thermistor-controlled, dual fan PSU. This article shows how to reduce its noise output so that it is just a whisper, barely audible from even just a couple of feet away. The basic methodology can probably be applied to any thermistor-controlled fan PSU that is too noisy.

This is not a review, so detailed observations of the performance of this PSU are not commented on here. That will come in another article, as will an analysis
of the fans used in these units.

DISCLAIMER & WARNING:
While the modifications described here have been successfully completed by Silent PC Review, we take no responsibility for your actions, your equipment, your property, your data and your safety. The information is provided here in good faith; what you do with this information is your responsibility. We recommend you study the article carefully and take all necessary precautions to guard against electrical shock from high voltages, data loss, equipment damage or personal injury before attempting to duplicate our results. Power supply units should always be unplugged from AC voltage before being opened. Large capacitors can hold a dangerous high voltage charge for long periods. Some technicians suggest to always ground yourself when working around electronic components. Finally, be aware that any kind of tampering, even just opening the case, usually voids the manufacturers warranty. Reducing airflow in a PSU may also reduce its longevity and reliability. 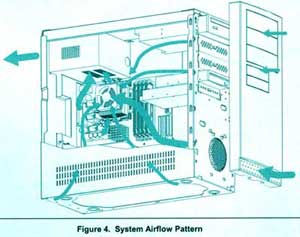 At first glance, the push-pull orientation of the dual fan arrangement looks very sensible. For a typical tower-style ATX case, this design tends to encourage the
optimal airflow from the lower front intake to the CPU / HSF area, and from there through the PSU and out the back. Outside air from the lower front rising as it increases in temperature while drawing heat away from hot components, then being ejected out the back. The accompanying case airflow diagram illustrates
this process well (image borrowed from a document entitled Performance ATX Desktop System Thermal Design Suggestions v1.0 available for download at Form Factors.)

I did a lot of research to find out more about the dual-fan system, about PSUs in general, and about the Enermax specifically.

Here are some observations about the push-pull dual fan setup. These aspects of fan performance in an in-line configuration is well-documented by the fan manufacturers and others. Please visit their sites for confirmation.
(You could start by looking through our http://www.silentpcreview.com

Please read the Disclaimer Warning before you dive in.

When I opened up the Enermax, I first removed the fans to listen to them by themselves in open air. Fans not only move less air when near things that obstruct airflow, they are noisier. The 92 mm unit is surprisingly quiet. The 80 mm fan is not, despite the noise spec being virtually identical. It is considerably noisier and is of a higher pitch. 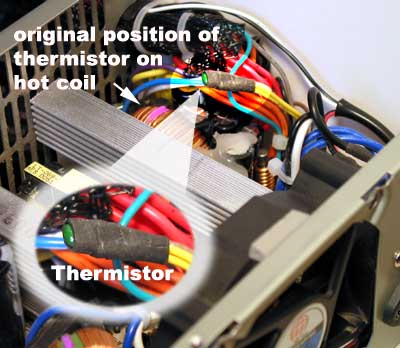 I found the thermistor hot-glued to a large coil. The coil reaches a high temperature very quickly when AC power is applied. Given the positioning of the thermistor directly on this coil, it is not at all surprising that the fan gets to full speed in 10 minutes.

At this point, one wonders about why the design engineers would go to the trouble of adding the thermistor and associated circuitry in this particular way. Surely, it is self evident that if fan speed is meant to rise in response to increasing heat within the PSU, putting the temperature sensor on a component that always stays hot defeats the purpose altogether. I sent emails to Enermax to explain this choice of thermistor positioning, and while they did answer many other questions, this one was never tackled satisfactorily. I will have to try again.

The issue, really, is whether repositioning the thermistor is dangerous, whether it amounts to meddling with a key element in a broad design function I do not understand. Or whether its some kind of internal fracas between marketing and engineering departments that resulted in a half-baked solution that pleased no one. In the end, I decided what I want is more important than what the Enermax folks want.

I gently pulled the thermistor off the coil. It was a green-headed device at the end of a 2.5″ piece of yellow-insulation wire. Only the tip was exposed, the rest being covered with a bit of heatshrink. I then
repositioned it away from the coils, off to one side.

I removed the 92mm fan and left the opening for it completely unobstructed. This was simple because the fans in the Enermax are connected to the printed circuit board via 2-pin jacks. My reasoning is explained in my comments about the push-pull fan configuration.

The loud 80mm stock fan was replaced with a Panaflo FBA08A12L. It is a drop-in replacement. The 2-pin jack it came terminated with was modified slightly to fit on the pins of the PCB. This fan is popular among
silent PC enthusiasts because it is quiet, widely available (at least in the U.S.), and very inexpensive. Its key specifications are 24 cfm, 0.1 amps and most importantly, just 21 dBA. Fan monitoring would be lost because the Panaflo (my version) did not have a 3rd speed sensing wire. I left the nice wire grill off, figuring that any reduction of turbulence would be a good thing. 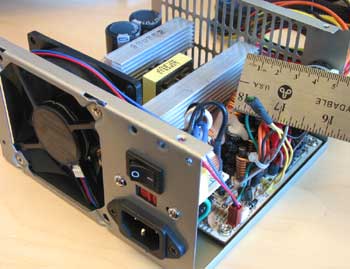 After putting the PSU back together, I ran it with the a spare motherboard to make sure it was still functioning. The fan did not start spinning, even though it was clear from the lit LED on the motherboard that the PSU was on. I touched the fan with my fingers and it started spinning ever so quietly. After a dozen or so repeated startups, I found that while the fan usually started, there were a few times when it did not. The voltage fed to the fan was too low to get it started consistently. Often, a fan will run at a lower voltage than it needs to start, because inertia must be overcome to start.

I had a number of Panaflo fans. Using a variable DC power supply, I tested all of them and selected the one that consistently started at the lowest voltage, which was 4 volts. It went in place of the first Panaflo. Now it started consistently every time.

Later, I discovered another way to ensure consistent fan start: just move the thermistor a little closer to the coils. They heat up so fast that the fan voltage goes up high enough to kick it into action within a few seconds after power is applied.

After these modifications, the noise emitted by the PSU laid on a piece of cushioning foam is inaudible from 4-5 feet away. From 2-3 feet it is audible as a whisper – just as Enermax promises.

I left the modified PSU on for several hours, checking the air exhaust with my fingers periodically, At the end of 3 hours, the exhaust air temperature felt slightly warm to the fingers. I deemed this satisfactory and installed the PSU back into my system.

The PC is under my desk. In this position the PSU is almost always inaudible, as the exhaust fan is pointed the other way. I give it a little help with a 1 x 2 piece of egg-crate shaped foam placed on the wall behind the PC.

Yesterday, while trolling for information in the forums at Amdmb.com, someone identified only as Divebrake had this to say in response to this very article:

The insight of this simple statement hit me like a ton of bricks. Of course! The thermistor is nothing but a variable resistor that changes value according to heat; why not just replace it with a variable resistor whose value can be changed directly? 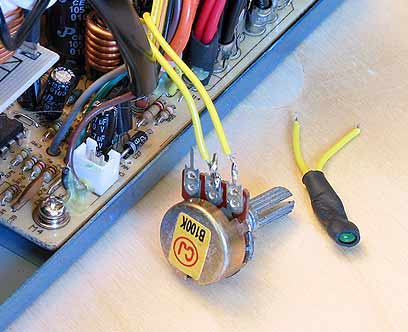 This morning, I dug through my odds-and-ends bins and found a 100K-ohm potentiometer. $1.45 Cdn, the plastic bag tag read. The thermistor dangling at the end of the yellow wires in the Enermax was snipped, and its resistance measured: 96K-ohms. Close enough; it is a 100K thermistor. I soldered the potentiometer in place, then powered the system up.

Lo and behold! I now have manual control of the main fan with a simple turn of the pot. The voltage adjustment range measures ~5V to 12VDC. It is a perfect solution that obviates any concern about what the effect of hot weather might be. If a heat wave comes along, just turn up the fan!

TerryW, an electronic technician with many years experience, cautions against replacement of the thermistor with a pot , saying in our forums that it functions much like a fuse. TerryW provides a quick technical summary of the switching power supply, which I certainly appreciate. My counter to his caution is that in many thermistor-fan PSUs, to continue TerryW’s analogy, the fuse size selected is much too small. The thread is definitely worth a read if you have come this far. My Disclaimer Warning about any PSU mods stands, BTW. 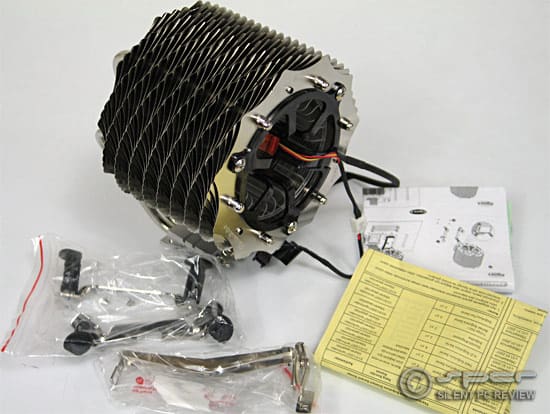