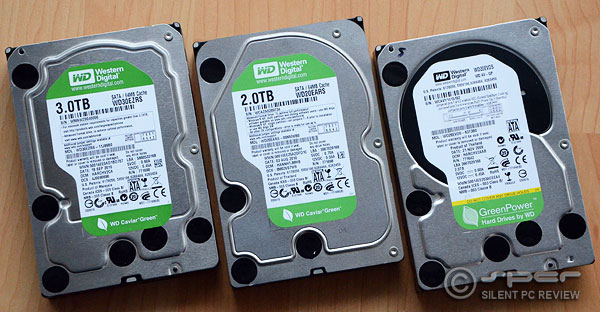 Our reference article about HDD noise, along with complete acoustics-ranked listings of all SPCR-reviewed HDDs since late 2008. Latest update 4 October 2014.

SPCR began publishing hard drive reviews in March 2002. From the beginning,
the focus was on noise. An improved methodology for testing hard drives was
introduced in May 2005. Since then, we have made one major change: All acoustic
testing has been conducted in our
own anechoic chamber since the fall of 2008. This allows us to obtain accurate
SPL measurements down to about 10~11 dBA@1m. Previously, we were limited by
ambient noise and limitations in our audio measurement equipment to about 18
dBA@1m during the day. The upgrade in our acoustic testing coincides happily
with a wider range of new 5400 / 5900 RPM HDDs that bump against the noise floor,
even in our anechoic chamber.

HDDs are racing to ever higher capacity, and ever lower prices as well. From
the $/GB perspective, 5400 and 5900 RPM 3.5″ drives remain king. The HDD
is not going away any time soon with the massive amounts of data growing ever
larger in the data centers, and the similar acceleration of image and video
accumulation in personal computing devices. As I write this, mainstream HDDs
have reached 6TB capacity, and 8~12 TB will be achieved in the very near future.

Corporate consolidations in the past decade have shrunk the number of hard
drive manufacturers to just three: Samsung’s HDD division is now a part of giant
Seagate, and only the 2.5″ drives have retained the Samsung label thus
far. Hitachi’s HDD division is now part of Western Digital, the other big player,
but its brand continues relatively unchanged. Toshiba also makes a full range
of drives, though best known for its notebook drives, and retains ~15% of the
drive market, with Seagate and WD splitting the lion’s share.

There have been no dramatic revolutions in hard drive technology in recent
memory; rather, a series of progressive evolutionary improvements that have mainly
targeted capacity by increasing the areal density of the platters. Performance
improvements do come simply because higher areal density means shorter head
movements to read different sectors of the drive. The fastest high capacity
7200 RPM drives now reach 150 MB/s sustained file transfer rates. Big 5400 RPM
aren’t far behind at around 120MB/s. The slowest current SSDs are at least 2X
faster than the fastest HDD.

Sub-6000 RPM 3.5″ HDDs have been our go-to quiet high capacity data storage
devices for years. The best of these now have performance barely perceptibly
slower than typical 7200 RPM drives, and achieve a level of noise and vibration
that is staggeringly low by standards less than a decade ago.

Solid State Drives continue making inroads to the mainstream. We tend to mark
Intel’s entry into the market in Q3 2008 as the starting point of SSDs becoming
viable storage options for PC enthusiasts. The prices continue plummeting, so
it’s just a matter of time before they are in every computer. SSDs are generally
silent, make no vibrations, and run extremely cool, all of which makes them
ideal for silent computers. We recommend using them for the operating system,
at least, and keep to the models that have the best reliability. No SSDs are
on our recommended lists; noise is not a criteria to choose them by, though
we have run into one or two samples that made some low level electronic whine/squeal.

SSDs for consumers come mainly as 2.5″ SATA drives topping out at around
1TB, with the latestest conforming to the SATA3 standard which allows up to
6.0 Gbit/s native transfer rate. There’s no need for the extra room of the 3.5″
drive form factor, so none have appeared in that size. They are also available
in smaller, bare PCB formats for direct plug-in to mobile and desktop motherboards,
mSATA and M.2. The fastest, highest capacity and most capable configurations
have taken PCIe form, used generally for enterprise and data center applications.
The latest development in PCIe SSD technology is NVM Express (NVMe), a scalable
host controller interface designed to provide a platform for ever faster data
delivery.

Longevity of SSDs is directly related to flash memory’s write endurance, which
is finite. Intel rates their top consumer drives for “up to 70GB writes
per day for five years (compared to the industry typical 20GB).” Kingston
rates their top consumer SSDs as capable of 3 Drive Writes Per Day and warranties
them for 3 years. The
Tech Report started a stress test project on six SSDs in August 2013 to
answer the question of how many writes consumer SSDs can take before dying.
The answer, after more than a year of continuous hammering, is surpringly upbeat:
3 failures at 700~800TB of writes, another failure at 1.2 Petabytes (1000TB),
and 2 more still running at over 1.5PB. None of the SSDs are rated for over
~200TB of writes, and none died without some advance warning.

We used to recommend 2.5″ notebook drives for the quietest desktop systems
for many years. Notebook drives generally have these advantages over 3.5″
drives: Lower noise, less vibration due to lower moving mass, much lower power
consumption, and correspondingly less heat.

Despite all of this, some sub-6000 RPM 3.5″ desktop drives are now just
about as quiet, and in a few cases, quieter, with about as low vibration. Notebook
drives are generally slower than desktop drives, and cannot hold a candle to
SSDs, which is the main reason we’re no longer as enthusiastic about notebook
drives.

The typical enthusiast PC configuration today is an SSD of 120~500 GB for the
OS and programs, combined with a high capacity 3.5″ HDD, say 2 to 6 TB.
Even in a small PC, a single 3.5″ HDD can be mechanically decoupled in
some way to reduce vibration induced noise to a minimum.

The only scenario in which 2.5″ HDDs have practical application for a
quiet desktop PC these days is when the case is too small for a 3.5″ data
drive. The most obvious example is an Intel NUC or Gigabyte BRIX with an mSATA
slot and room for a single 2.5″ drive. The obvious choice of the latter
is a large capacity 2.5″ HDD, which get up to 2 TB now.

We used to short-list only the quietest drives on the recommended lists. For
this iteration, we’ve changed our methodology: Every drive tested since late
2008 (when they began to be tested our anechoic chamber) is listed, ordered
by its level of noise and vibration. Study the data, read the reviews, and pick
your own poison.

We test drive performance, but these results don’t come into play in our rankings.
The performance test results are available in the reviews. We caution against
expecting measured differences to be easily or always perceptible. Generally,
performance is similar for models of similar basic specifications: Spindle speed,
capacity, and areal density. Small differences in HDD performance are almost
impossible to appreciate in actual use because there are umpteen bottlenecks
and overheads in the PC that obscure such differences. (For an entertaining,
informative exposition of this theme, check out Dan’s Data’s How
fast is a hard drive? How long is a piece of string?)

The noise of a disc drive mounted in a case comes in two forms:

Structure-borne acoustics is the dominant source of HDD-induced PC noise. Seagate’s testing has shown that changes in stand-alone drive acoustics had little effect on the overall system acoustics when drives were hard mounted in the chassis. Hence the dramatic noise reduction evident with decoupled mountings such as the NoVibes, SPCR’s own elastic suspension, or simply placing the drive on soft foam. The noise emitted by even drives with very quiet stand-alone performance is greatly effected by how it is mounted to a chassis. There is also a useful forum thread on the effectiveness of various HDD decoupled mounting techniques.

There are also two
main types of noise:

Until about 2005, the majority of hard drives on the market used ball-bearing
motors, which had a characteristic high pitched whine and other objectionable
airborne noise. Since then, the industry has shifted to much quieter FDB (Fluid
Dynamic Bearing) motors, with the result that most recent drives are significantly
quieter than older drives, sometimes by as much as 10 dBA@1m. All major drive
manufacturers now use FDB motors in their current lineups. If you have a typical
non-FDB drive, the simplest way to achieve lower noise (and improved performance)
is to swap it for a new drive, almost any new drive.

There are three other factors that affect drive noise:

The difference between idle and seek noise. While a drive idling quietly
may not be intrusive, if seek noise is considerably louder than idle noise,
it will certainly be noticeable. The smaller the difference between seek and
idle noise, the less audible the drive will be. The sound quality of seek
in some drives is more tonal and more prominent than in others, even when
the measured SPL is the same as in other drives.

Automatic Acoustic Management (AAM). This technology sacrifices some
seek latency in favor of softer, quieter seeks. The performance hit is often
small enough that AAM is well worth using. With the notable exception of Seagate,
all manufacturers these days allow AAM to be enabled, although its effectiveness
varies from drive to drive. Not all manufacturers provide a utility to enable
and adjust AAM, but many drives work with Hitachi’s
feature tool.

Discuss
this article in the forums.

GUIDE to the TABLES

Mfg date: Date of manufacture of our sample model.

Vibration: The level of vibration produced by the drive at idle, evaluated
relative to standard reference drives on our
standard vibration box. 10 = zero vibration, 1 = jackhammer level.

Airborne Acoustics: The measured decibel level, A-weighted (dBA),
at 1m distance, during idle and seek, with AAM enabled and disabled (when
this is a switchable option).

Power Consumption: The amount of power in watts used by the drive.
Can be used to gauge thermal behavior.

NOTE: Only HDDs that were tested (or retested) in SPCR’s anechoic
chamber are listed in this guide (post-2008). This does not mean that previously
tested and recommended HDDs are not quiet, only that we lack sufficiently
accurate acoustic data to put them in context. Keep in mind that drives
that date back more than a couple years may be discontinued.

Hard drive noise reduction products typically take the form of enclosures,
although the category is not strictly limited to such devices. Noise reduction
products are tested using the loudest and most vibration-prone drives in the
lab. The noise levels are compared with and without the device. The measurements
below reflect the sonic improvement effected by the products.

Discuss
this article in the forums.