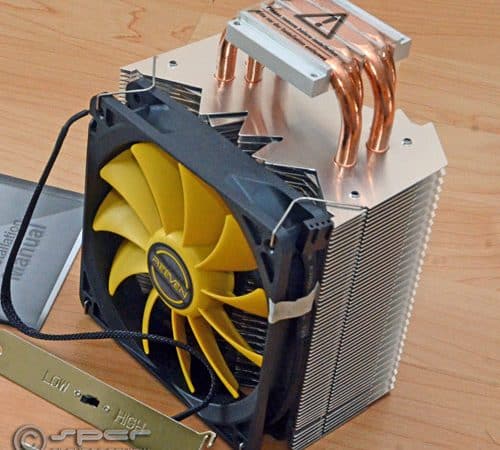 Reeven, a relatively unknown PC cooling company, looks to make a name for themselves with a pair of oddly named heatsinks. The Kelveros is a classic tower heatsink with direct touch heatpipes while the Arcziel is a traditional, but rather tall down-blowing model.

Reeven is a relatively unknown PC cooling company that might have some relationship with Scythe, the well known heatsink manufacturer. The "Reeven" is the name of one of Scythe’s tower heatsinks and a couple of Reeven’s products show up on Scythe’s Japanese website. We recently reviewed the Reeven Vanxie, a tiny low profile stock cooler replacement. This time we look at a couple of bigger models, the oddly named Kelveros and Arcziel.

In many regards, the Kelveros is a classic, modern, heavy duty, tower heatsink. It stands 16 cm tall, has a substantial stack of aluminum fins, is equipped with a 1900 RPM 120 mm fan, and weighs just over two pounds. The cooler does have a few interesting features, including direct touch heatpipes, a technology that has made it possible for manufacturers to produce good, but not great, heatsinks at modest cost. The Kelveros also has an imposing jagged fin design, similar to the Scythe Yasya. A two-speed fan controller bracket is attached to the fan to augment its PWM capability.

The accessories found in the box consist of Intel and AMD mounting hardware, including a rotatable universal backplate, a small packet of thermal grease, and a case sticker. The installation parts seem to be on the weak side, comprised of thin metal brackets and small screws with fine threads. We prefer coarse threads and easy to secure thumbscrews/nuts to minimize fiddling.

The Arcziel is a more modestly sized down-blowing cooler with a 92 mm fan, a height of 11.6 cm and weighs slightly over a pound. It utilizes a traditional three heatpipe soldered to a copper base scheme. The fan is raised using four plastic clips, creating a fair amount of separation. This produces less turbulence but also decreases cooling proficiency. It’s a questionable choice as the fin-stack is very dense and thick for a top-down heatsink.

The Arcziel has a similar accessory set, but includes extra fan clips which actually turned out to be not only useful, but entirely necessary. Being a budget heatsink, the mounting options are more basic, pushpins for Intel motherboards, and tension clips for AMD installations.

The stock fan bears a resemblance to Scythe’s Slip Stream series due to the soft curves of blades and the curled struts that increase the angle they form with the blade’s edges. Spinning at around 1900 RPM, the fan has a substantial power draw of 6.24 W, a tremendous airflow rating of 101.3 CFM and presumably a high noise output to match.

Though the Kelveros fan has a high nominal speed, its acoustic character was surprisingly inoffensive for much of its range. It was turbulent and buzzy at higher speeds like many sleeve bearing models, but as the motor was slowed, the noise quality remained more or less constant. The one exception was at 5V where it generated 15~16 dBA@1m and produced on an odd low pitched tone. This seems to be an isolated effect that was only noticeable at or near the 5V level, so for the most part, the fan undervolts well. The included two speed controller acts as a 12V/7V switch which isn’t particularly useful as PWM control is now common, and the fan still emitted a loud 25 dBA@1m at 7V.

Our acoustic analysis shows the tone we noted at 5V is centered at approximately 300 Hz. At most other voltages, the fan was surprisingly smooth.

The Kelveros’ delivered a 44°C rise at top speed, a poor showing as top notch heatsinks can typically reach a similar result with very low fan speeds. Furthermore, the performance barely changed when the fan was slowed to between 9V, 7V, and 6V. The stock fan was essentially bottlenecked by the capabilities of the heatsink. Low speed performance wasn’t great either; the stock fan was beaten by our reference Nexus 120 mm fan by 3~4°C operating at similar noise levels.

The Kelveros isn’t a bad heatsink, but it is incredibly inefficient for its size and weight, ending up near the bottom of our large heatsink performance chart. It was also second worse amongst side-blowing tower coolers, beating only the AC Freezer Xtreme.

As one would expect of a 2500 RPM model, the Arcziel’s stock fan is quite loud. It becomes quieter when undervolted, but the fan’s character changes depending on the level. At 9V and above, it had a typical buzzy and turbulent nature. At 8V, the turbulence was transformed into an annoying drone. At 7V it produced 16 dBA@1m which is considered quiet by most users, but the motor was audibly humming and rattling when observed at close proximity.

The hum emitted by the fan at 7V has frequency of about 170 Hz, fairly low pitched.

For such a large cooler (at least by our small heatsink testbed standards), the Arcziel’s performance is underwhelming but at least it doesn’t hit an apex like the Kelveros. The fan speed had a significant impact on temperature, creating a 13°C range between 6V and 12V operation. Interestingly, this is one of the few heatsinks where our reference fan actually fared worse, producing a thermal rise above ambient 5°C higher than the stock fan while emitting 13 dBA@1m.

Initially we thought it unfair to test such a big cooler on our small heatsink testbed, but our fears turned out to be unjustified. Like the Kelveros, the Arcziel doesn’t live up to expectations, being outperformed by the Big Shuriken 2 and Noctua NH-L12, despite a huge size mismatch.

VRM cooling is even worse on the Arcziel as it has a substantial fin-stack sitting up high above the motherboard, and the fan too is elevated, making it very difficult for airflow to make its way down over the areas around the CPU socket.

The Reeven Kelveros’ stock fan, despite being a high speed model, has decent acoustics once the speed is turned down. That, unfortunately, is the only compliment we can pay. It’s impossible to run the fan at quiet levels while maintaining good performance because the proficiency of the heatsink is decidedly poor. Of all the tower heatsinks with 120 mm fans we’ve tested over the past few years, the Kelveros is second worst only to the AC Freezer Xtreme, which sold for considerably less.

The main culprit appears to be the mounting system — a backplate doesn’t necessarily equate to good contact between the heatsink base and processor heatspreader. The mounting clips are thin and weak, and attached to the bottom of the heatsink, rather than over the top of the base. When the screws are tightened, the metal bends downward, so most of the extra pressure is applied to the corners, rather than the center where the majority of CPU heat is generated. Having to flip the motherboard upside-down also makes installation difficult, particularly when attempting to center the bolts so no corner is favored over an other.

Availability is also an issue. We found only one place actively selling the Kelveros, a Japanese site listing its price as ¥ 3,980 or close to US$50. At this price, no one should even consider purchasing it. The Kelveros has nothing to distinguish itself aside from its looks.

As much as the Kelveros disappointed, the Arcziel managed to fail even more dramatically. It’s the first CPU cooler we can recall that could not be installed on our 1366 platform due to incorrect mount sizing. We then resorted to testing it on our LGA1155 test platform for smaller coolers, and it failed to surpass the performance of some heatsinks barely half its size. The fan isn’t very good, either, with tonal elements at various speeds.

The fundamental design of the heatsink seems flawed for a down-blowing model. The fin-stack is very thick with tightly packed fins, creating a big obstacle for the fan to push air through. In addition to being a tall cooler, the fan is raised far off the heatsink surface, decreasing its cooling capability further. The rigid plastic clips used to keep the fan in place are terrible, breaking so easily that Reeven provides an extra set as part of the accessory package. We started off with 8 and after a couple of careful fan swaps, were left with just 3.

The Arcziel too seems to only be available in Japan at the moment, with a retail price of ¥ 2,131 or approximately US$27 after conversion. With all its problems, it might be worth buying at a 50% discount. It is after all, still better than a stock cooler, though is incredibly inefficient for its size.

Reeven has made the most underwhelming entrance to the competitive world of aftermarket CPU coolers we’ve ever seen.