Reflections on the Asus Eee PC 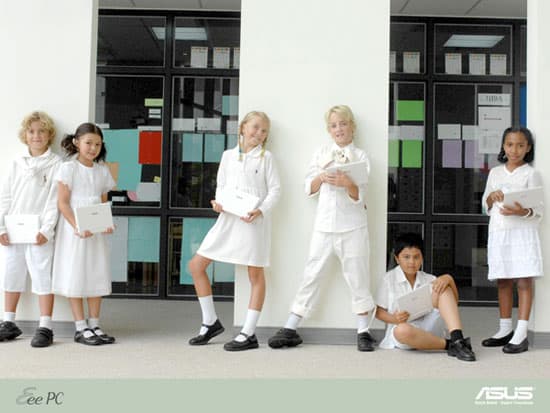 Three weeks after the Eee PC was released for retail sale to a thunderous roar of applause, we consider the hardware, the software and the significance of this new ultramobile notebook from Asus in an article that’s equal parts review and editorial.

It’s been three weeks since the Asus
Eee PC was released for retail sale to a thunderous roar of applause. In
the first week of November, reviews and news pieces seemed to spring up on all
kinds of media: The usual array of computer hardware and mobile computing web
sites and magazines, various “gizmo and gadget” sites, Linux web sites,
and even tech columns in the mainstream media. You have to hand it to Asus;
they did a great job of getting attention for their new product.

We managed to borrow a Eee PC sample with 4GB flash drive immediately after
the launch event and to play with it for a few hours. Just long enough to do
a few measurements, run the machine through basic operations and get a general
feel for it.

So after such a brief encounter, what can SPCR add to the thousands of words,
pictures, and videos that have already been produced for the EEE PC? Mostly,
a minor counterpoint to the virtually unanimous praise: The EEE PC is an important
ground-breaking product in many ways, but its usefulness really depends on your
own expectations. 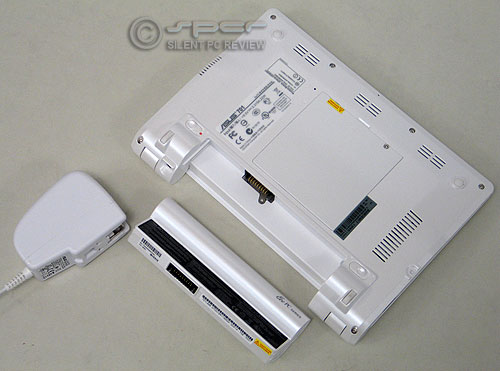 Why is the EEE PC important? There are many reasons, but these stand out:

To expand on these points…. 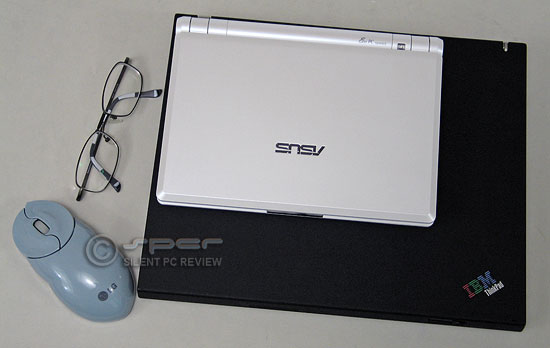 Here’s another visual comparison of the Eee PC vs the IBM T42.

Not just for Third World children

OLPC turned attention
to “bridging the digital divide” with a very ambitious educational
project to bring a computer to every child in the world, specifically the developing
world, but it’s been a slow haul, and the original target price of $100 has
doubled. The benefits of a small, very low power computer than can perform all
the nominal functions of a laptop are increasingly evident to everyone, so making
a commercial for-profit product that anyone can buy makes perfect sense. Such
an approach might have helped to expedite the development of the OLPC.

The Eee PC is being sold all over the world, and initial
sales were very promising. Their original plan was “to
start shipping the units in July or August, with a target of selling 200,000
units this year,” a target that’s obviously going to be hard to meet
with the delayed launch.

It’s become fashionable to tout low power consumption devices as green, but
when it comes to computers, this is very misleading. Operational
energy consumption represents only about a quarter of a computer’s total ecological
cost. Most of the CO2 emissions associated with a computer have already
occurred before the end user ever boots it up. (See this
page on Life Cycle Analysis of computers at EcoPC
Review.)

It’s difficult to assess the pre-user eco-footprint without a detailed life
cycle analysis of the particular computer. In the absence of such an analysis,
the quick and dirty guideline is weight and size: The smaller and lighter it
is, the lower its production environmental costs are likely to be. The Eee PC
weights just 0.92 kg; it is pretty green by the rough weight/size guideline,
as are all UMPCs. The casing, which looks pretty good and feels quite sturdy,
is made of ABS, a good quality plastic that’s relatively benign as plastics
go.

$250 was the anticipated price of the base Eee PC when it was first unveiled
in June 2007, so the $399 price of the 4G model is considerably higher. But
compared to other UMPC devices, it’s much less costly. There is hardly a single
product under $1,000 in
UMPC Portal’s database of available products, and none with similar capabilities
at this Eee’s price. Compared to much larger budget latops, it is still cheaper
by a couple hundred dollars. The low pricing is one of the reasons for all the
attention this products has been getting in the media.

It’s no surprise that Linux (Xandros)
is the OS Asus chose for the Eee PC, along with Open
Office productivity applications. These appear to be the favorite choices
for the vast majority of UMPC devices. Windows would surely have resulted in
a slower experience and required more storage, no small matter, considering
the 2G flash drive of the bottom model. Let’s not forget the licencing fees,
either. It’s interesting that the most serious Linux challenge to Microsoft
OS dominance looks to come via the UMPC and low end PC markets. No matter; there’s
enough demand for the comfort of Microsoft familiarity that Asus has announced
a version preloaded with Windows (apparently XP) by the end of this year.

A large collection of other software is preloaded; these are best covered in
reviews by PC
Perspective and Hot
Hardware. The latter noted that many “have “kids” written
all over them” despite Asus denying that the Eee PC is not meant to
be a direct competitor to OPLC. 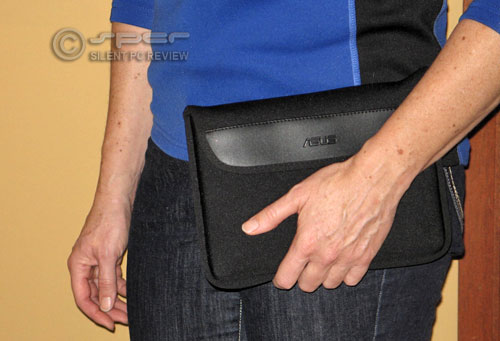 A protective pouch is part of the package.

All of the aforementioned factors combined have the potential to make the Eee
PC the first successful “computing everywhere for everyone” device
that Intel fantasized about at the September 2007 IDF (see this youtube
video). The fact that their Celeron
M ULV 900MHz powers the Eee PC surely delights Intel, especially in light
of the AMD Geode powering the OLPC XO-1.

A key question is usability: Does the Eee PC have enough of it to be a truly
useful mobile computing device for everyone? The answer depends
at least partly on expectations.

The responsiveness felt fine to me, which jibes with most other reviewers.
There were no annoying lags or obvious bottlenecks with most tasks I tried.
Most reviewers seemed to prefer Eee over other smaller UMPC for the better usability
of its larger keyboard. Most also felt the 7″ diagonal 800 x 480 screen
was fine, with good brightness and color. 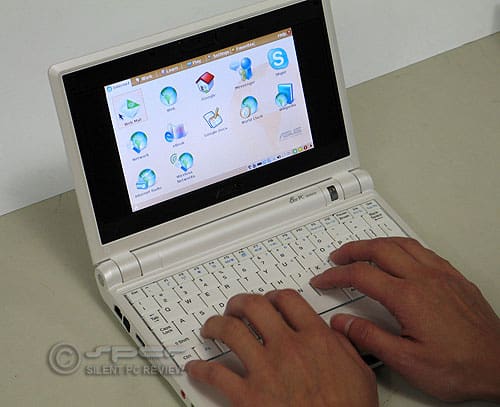 Small adult hands can navigate the keyboard without much difficulty.
Larger hands would have a lot more trouble.

But what about when you compare the Eee to a bigger conventional laptop? If
you’re expecting to exchange emails, view images and videos, scan a few web
pages and review the odd document, especially in short sessions, the Eee is
fine, and its mobility a great asset. But for me, trying to do more extended
work that’s comfortable on a larger laptop — actually create documents,
work on spreadsheets, build web pages, or photo editing — very quickly
led to frustration mostly because of the lateral / horizontal scrolling that’s
so often necessary on the small screen. As one
reviewer commented, “It’s enough for only 18 lines of 12pt text in
OpenOffice.” This is not to say one cannot adapt to using the Eee in this
way, but I, for one, would not be interested in making that kind of painful
adjustment.

This means I could not travel for work only with the Eee; it would have to
be considered a secondary machine for use on the run, perhaps on holiday or
around town if I really felt the need to be constantly connected. On the other
hand, that kind of mobile connectedness seems best served by something like
an Apple iPhone,
which is only a bit larger than a typical cellular phone, and far more convenient
for quick communication.

Some people at Asus must have anticipated reactions like mine, because at Computex
Taipei in June when the Eee PC was first shown, Asus suggested a selling price
of “about USD $299 for the 10″ version.” Asus contradicted
their own June
8/07 news release, however, and quashed persistent rumours about a 10″
screen version last week, saying it was not in their current plans. I wouldn’t
count a larger screen model out, though.

Ubiquitous Computing for Everyone?

Again, we have to ask, what is your vision of “computing”? If it’s
brief forays into web, email, image viewing, etc, via a small wireless mobile
computer, then OK, the Eee will work for you. But Asus has a vision of the Eee
PC being used not only by the young but also by the old, who do not have the
near vision and nimble small fingers of the young. I doubt the older target
audience would be as interested, although some might be interested in giving
it a try. Never mind my doubts: Asus reports that as the holiday season looms,
orders for the Eee PC are brisk.

My take is that it’s an interesting attempt at ubiquitous mobile computing
for everyone, probably the best yet, but it’s not without flaws and shortcomings.
This means little in terms of marketing success; business history is full of
examples of flawed products that came in at the right time, captured people’s
whim and fancy, and sold shiploads. The Eee PC just the first of a whole series
of low priced computing products, both mobile and wired, that the industry will
roll out over the next year or two. Better ones (and probably worse ones) will
come along, you can be assured of it. It’s all part of the effort to keep the
computer market growing.

When you come right down to it, the movement to cheaper, easier, more mobile
computers is not really about bringing them to “the next billion users“,
as some companies have quipped. It’s about selling the next billion computers…
never mind to whom.

It couldn’t be an SPCR article without some discussion of noise, could it?
Of course not!

The Eee PC has no moving parts except a CPU cooling fan which is thermally
controlled to come on only when temperature rises above a certain point. It
was essentially silent through most of my short audition. If I pressed my ear
up to the unit, some electronic noise (hum, squeal) could be heard faintly at
a very low level, but this is perfectly normal for any electronics. Outside
of a serious anechoic chamber, there’s no way this noise could be measured with
a sound level meter, and recording it would have been a serious challenge. Its
CPU cooling fan remained off most of the time, although other reviewers have
talked about it coming on more often. Perhaps they pushed their Eee PC harder
and longer. When the fan did come on, it was audible, but not at all offensive.
Unfortunately, the SPL with the fan on was not measured.

This is about all I can report. With the Linux OS, my familiar Windows torture
tools were not operative and there was no time to collect appropriate alternatives.
Perhaps we report back later with more detail, with another sample we can keep
longer.

Many thanks to Vivian Lien of Asus
for the short but sweet loan.