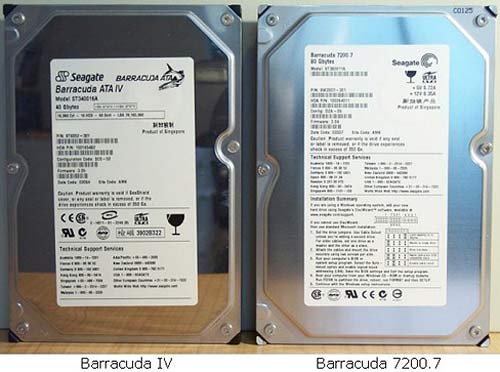 Latest SPCR author Dru reviews the new Seagate Barracuda 7200.7 drive by comparing it against a well known silent drive, namely the Seagate Barracuda IV, now some 18 months “old”: A noise and performance contest between generations. Does one sweep both categories?

Dru, who hails from Arizona, became “obsessed with silent computing” about a year ago. He has used computers since the early 1980s and spends 8~12 hours each day on the computer. A home-based software developer, Dru likes to work during the late hours of the night when there’s hardly any noise or distractions. He compares a newly purchased Seagate Barracuda 7200.7 80G hard drive to his existing Barracuda IV 40G hard drive; they are both single platter models. Dru apologizes for the “subjectivity” of his review and his lack of acoustic measuring tools. There is no need for any apology, as the low noise levels of these drives would have mandated a world-class anechoic chamber and state of the art acoustic measurement tools inaccessible to mere mortals. Dru has given us a very good comparative review, in my opinion. – Mike Chin, Editor

Before I start the actual review, I need to make a couple of points.

OK, on with the review..

I thought the best way to review the Seagate Barracuda 7200.7 drive was to compare it against a well known silent drive, namely the Seagate Barracuda IV. The Cuda IV has been out for quite some time and has recently gained more popularity because of its extreme quietness (well, compared to other hard drives) with decent speed for a 7200rpm drive. The hard drives being compared are both ATA.

There’s probably not much to notice from the label side of the drive from the pictures below, but I do know some people like to see it for kicks. The Cuda IV does have a clean mirror look to it, and the Cuda 7200.7 has more of a blurred reflective finish.

Here are close ups of the top portions of the drive labels: 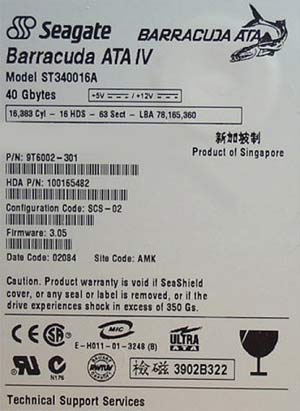 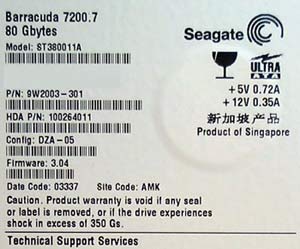 From the drive labels, you can see that I’m comparing a 40GB Cuda IV against a 80GB Cuda 7200.7. The Barracuda IV series uses 40GB platters. The Barracuda V series uses 60GB platters. Now, Seagate has caught up with its competition by finally introducing 80GB platters with the Barracuda 7200.7 series. Again, we are striving for silence, so I used the maximum storage available that would fit on 1 platter. Even Seagate’s own spec sheets show the 1 platter drives to be slightly quieter than the multi-platter ones.
Things get a little bit more interesting when we compare the other side of the drives. One immediately obvious thing missing on the Cuda 7200.7 drives is the SeaShield. People have been (and still are) wondering why Seagate chose not to include the SeaShield on these latest drives. Is it because Seagate has been able to engineer the internal mechanism to be quieter? Perhaps it was a cost cutting move to save on production? I wish I had the answer but don’t. I must remind that the Barracuda Vs do have the SeaShield like the Cuda IVs. 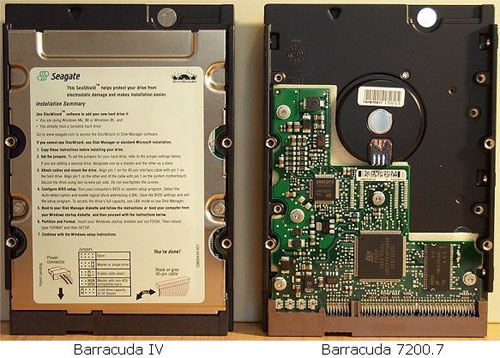 Since it was hard to tell the thickness of the blue foam used with the SeaShield, I decided to take an angle shot shown below. The blue foam on the Cuda IV has a good thickness to it. On the Cuda 7200.7, you can see a very thin type of white foam used. My guess is you need this to separate the circuit board from the drive casing. At first, I thought it was being used to reduce noise but thought it to be too thin. I didn’t remove the SeaShield on the Cuda IV but am assuming the Cuda IV has this thin white foam, too. 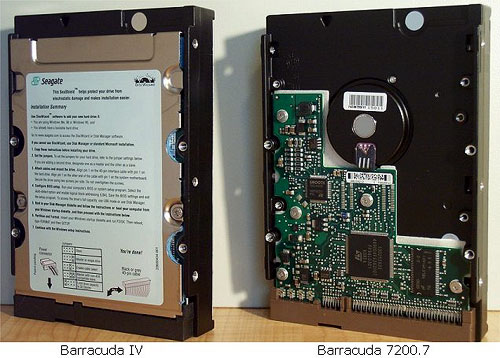 While looking at the drives on this side, I thought what if we could just remove the SeaShield from the Cuda IV and stick it on the Cuda 7200.7? To me, all the drive holes appear to match up from both drives. Unfortunately, at this time, I couldn’t find the right hex driver to remove the 2 screws securing the SeaShield. I’m still thinking about trying it. If I get to doing it, I’ll post an update to this review. Now, let’s power these up!

To test these drives for noise, I needed to put them into a near silent system which is described below:

To make sure the system was quiet, I booted the system up without connecting a hard drive. The system was pretty silent. Remember from the beginning of the review that I mentioned I don’t have any sound measuring equipment except for my ears. 😉

I used Hitachi’s Feature Tool (v1.70) to check the settings of AAM for both drives. By default, the Barracuda IV was set to “Quiet Seek Mode.” Strangely, Feature Tool reported the Barracuda 7200.7 as not having the AAM feature. Why does Seagate list both Quiet and Performance seek info on their Barracuda 7200.7 data sheet? Last I checked, Seagate’s own utilities didn’t provide a way to change the AAM for their drives (my ignorance?). If AAM is able to be toggled for the Cuda 7200.7, I wasn’t able to do it. My guess is it’s set to Performance. 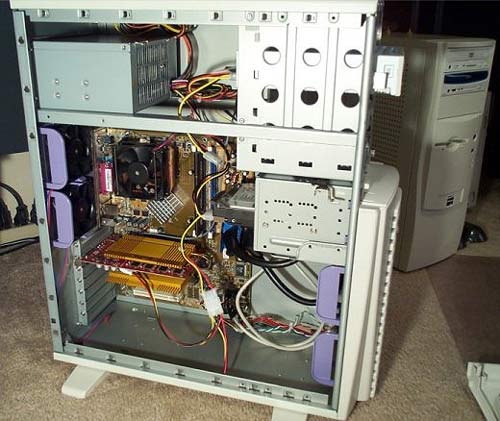 With the Barracuda IV and the case open, I notice a faint whine while running idle. I put my ear about 6 inches away from the drive. During access, I can hear the seek noise but am pleased with it’s very quiet seeks. With the case closed, I cannot hear the idle whining at all. The seek noise is still audible but only when there’s absolutely no other noise in the room. In other words, it’s very quiet but not inaudible.

I now swap in the Barracuda 7200.7. Upon system power up, I already notice it to have a slightly higher pitched whine to it. With the case open, it’s very noticable (again, at 6 inches away). Seeks are also a “tad” higher in volume but with the same pitch as the Cuda IV. At this point, I’m worried that I’ll be able to hear the drive’s idle whine even when the case is closed. Fortunately, when the case is closed, the idle whine is almost inaudible (if I concentrate enough on the whine, I’ll notice it). However, the seeks are noticably more audible even with the case closed yet somewhat tolerable. If you need absolute silence, this solution won’t work for you.

I must say I’m a believer in the NoVibes III since I’ve been using it mainly with a Cuda IV. The drives were mounted as shown below. I chose to install the drives in the lowest possible 5 1/4″ bay (recall that the NoVibes II requires a 5 1/4″ drive bay). If you’ve read elsewhere about the NoVibes III, you know that it helps mostly by reducing seek noise and not idle drive noise. 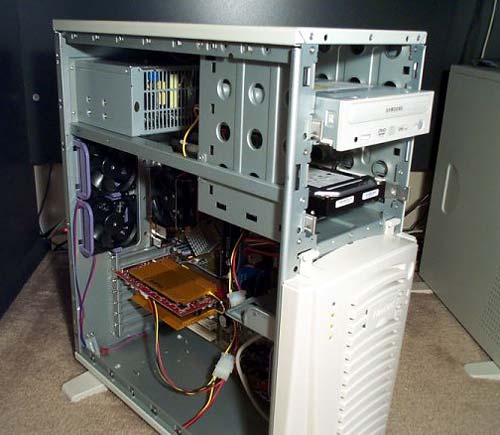 If anything, the Barracuda IV is a great candidate for the NoVibes III. When the case is closed, you cannot hear this drive at all! There’s no whine nor seek noise. It’s a must have for the extreme silent enthusiast. Of course, some have DIY jobs that probably work just as well as the NoVibes III.

Now, let’s see how the Barracuda 7200.7 performs. Again, with the case closed, I really can’t make out the idle whine. I must say that there is faint audible seek noise with suspension but it’s quite tolerable. The seek noise is reduced to at least half of the direct mounting way. To me, it sounds almost as quiet as the Cuda IV with direct mounting. For me, the Cuda 7200.7 while suspended is a good and worthwhile solution over direct mounting.

After doing the subjective heat test above, I utilized DaleSoft’s DTemp the next day. I came up with the following:

So now, my subjective heat test looks false. After some thought, I have concluded that maybe the temp. sensor is in a different location for each of the drives. Perplexed, I felt the drives again and still feel that the Cuda 7200.7 felt cooler (I put my hand on the label side of the drives which was at the top while mounted). The chassis temp. was 32C in all of the test cases, and the room was 21C. While suspended, the drives did show being 12C higher. However, Seagate claims the maximum operating temperature of the drives to be 60C. Some might feel more comfortable with either direct mounting or running a fan over the HD.

Does the Cuda 7200.7 perform better than the Barracuda IV and V series of drives? I used the same system setup from the previous page. I used Futuremark‘s PCMark2002 for testing. Results are below.

The Barracuda 7200.7 is faster in every respect!

I next compared the drives using SiSoftware Sandra 2003 Standard. Results are below.

I must say I’m impressed with the increased performance with the new Barracudo 7200.7 line. I did not make the effort to compare against competitors like the IBM 180GXP series or Maxtor DiamondMax Plus 9, but my guess is Seagate is not wanting to be left behind, performance-wise. The Barracuda 7200.7 drives “subjectively” run cooler than their past generation relatives with better performance. If you want to trust the DTemp results, you are still gaining more performance with the same heat.

Our main focus here is noise. The Barracuda 7200.7 is not a Barracuda IV in the noise category. Even today, I don’t think any drive exists that can beat the Barracuda IV’s very low idle whine and seek noise. However, with the nice increase in performance for the Cuda 7200.7, the idle and seek noise is only so slightly higher than the Cuda IV’s noise levels. With a closed case, the most noticable difference is the seek noise being slightly higher. At least two questions remain:

1) Why did Seagate not incorporate the SeaShield for the Barracuda 7200.7 series?

2) Can the SeaShield from either a Barracuda IV or V drive be installed onto a Barracuda 7200.7 “and” further reduce noise?

If you are seeking absolute silence, I still recommend the Barracuda IV. They are still available today. If you want an increase in performance and don’t mind spending the extra money in suspending your drive (or DIY for cheap), then I say get the Barracuda 7200.7. As for me, I’m leaving my Cuda 7200.7 suspended in my main system. * * * * * Discuss this article in our Forums.