A smarter realization of the old “seal-up-that-hard-drive” idea? Smart Drive is a slick aluminum hard drive enclosure with the superb fit & finish done so well by the Japanese. US retailer Silicon Acoustics kindly provided a review sample. Does it work? Read on & find out! 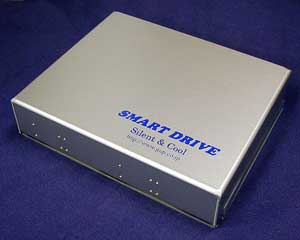 The
idea of isolating a noisy, whiny, annoying hard drive in an acoustically sealed
box is not exactly new. Long before commercial products based on this idea
began appearing, people who detest drive whining and chugging and clicking
were stuffing them in cardboard shoe boxes, empty chocolate tins around socks,
and wee wooden boxes with wood shavings… well, maybe not wood shavings.

With commercial and most DIY sealed boxes for hard drives, heat has been
the Achilles heel. Hard drives get hot and need both conduction to the chassis
and some airflow around them to stay cool. Deprived of these, they get much
hotter than usual. Reports of premature hard drive failure due to overheating
in quieting enclosures are not unusual. As hotter 7200 RPM drives have taken
a large share of the market, the possibility of overheating is serious. The
adage that data is the most precious thing in your computer rings true if
you’ve ever lost a hard drive with real data on it.

Smart
Drive seems to be a smarter realization of the seal-up-that-hard-drive
idea. Silicon
Acoustics, a great web retail shop for those seeking quiet PC products,
kindly sent me a sample to review some weeks ago. I believe Silicon Acoustics
is the only dealer in the U.S; my apologies for the long delay in getting this
review out.

Made in Japan by a company called Grow
Up Japan, Smart Drive is a nicely finished aluminum box with slightly rounded
edges about the size of a typical CD drive. It’s so stylish and slick-looking
that it would not be out of place in one of those “side-windowed” showoff PCs
that seem to compete with cars for young men’s attention these days.

Smart Drive actually features two skins of aluminum with dense foam in between
the inner and outer layers. The joining edges are finished with gasket rubber
material for a very tight seal. The detail around the cable exit is well thought
out, with a soft translucent plastic sleeve on the edges contacting the wires.
Six flush mount screws keep the cover firmly in place. The fit and finish is
top notch. Overall, appearance and attention to detail is impressive. It’s just
the kind of thing you’d expect in a high end Japanese camera or automobile.

The current price of the Smart Drive is US$65. 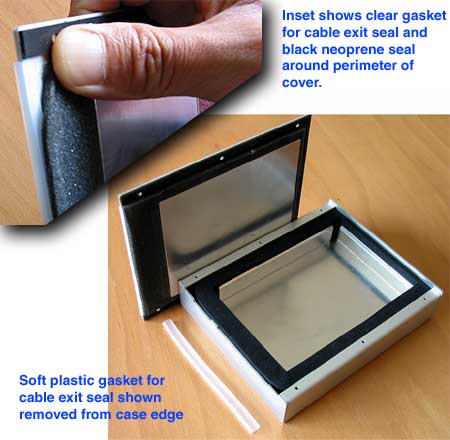 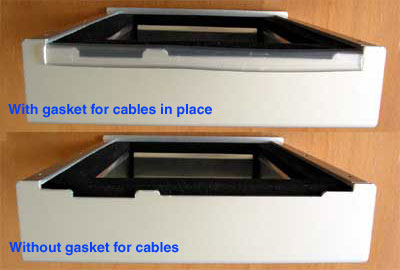 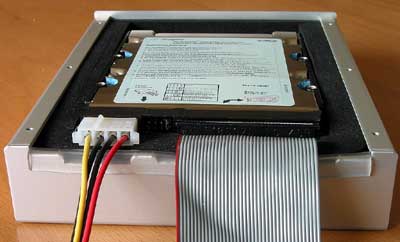 Drive goes in upside down in box but is right side up when
Smart Drive is mounted normally; the cover is actually the bottom. The translucent
soft plastic sleeves on either side of the cable exit molds around the wires
for a good seal.

On first impression, the seeming lack of any metal-to-metal contact between
outside and inside aluminum layers made Smart Drive’s claim about keeping the drive cool seem dubious.

That’s right: there appears to be no contact between the outside and inside
layers of aluminum. The exposed anodized aluminum was scraped in a couple of
spots to do a continuity check with a multimeter. There is no electrically conductive
path between the inner and out layers of aluminum on the top or bottom of the
case. This means any heat conduction between the hard drive and the PC case
must occur through sandwiched foam layer.

Our understanding of the thermal characteristics of all kinds of foam comes
from both theory and practical experience. The theory says basically that sound
absorption occurs when air borne vibrations are converted to heat caused by the
microscopic movement of the absorbing material. Practical experience says that
foam retains body heat in beds, sofas, car seats, and so on.

It is possible, however, that layers of anodized aluminum are in contact with
each other on the top and bottom layers, not passing electricity but conducting
heat. Or that the foam passes enough of the heat to the outside aluminum layer
to allow some degree of cooling to take place. It is not possible to tell without
tearing the sample apart.

A hard drive was put in the Smart Drive to hear what it does. A single-platter
Seagate Barracuda IV drive was used on the test bench with a fanless power supply.
The bare drive and the Smart Drive were each placed on 6″ by 6″ foam pieces
half an inch thick to decouple them from the table. The test lab is a 10 by
12 foot room, with hardwood floors and only one virtually silent computer running
during sound testing. The ambient noise in this room with the single PC running
is approximately 32-35 dBA.

Subjectively, the noise of the Barracuda IV can be described as slight whirring
with little high frequency content (whine) and some low frequency components.
The Barracuda IV is rated by Seagate for 20 dBA in idle. We have no way of verifying
this because measuring such low levels requires highly sophisticated, expensive
test equipment and a super quiet environment. There is little reason to doubt
this claim, however. The drive is quieter than any 20dBA-rated fan in our lab.
Subjectively, a Panaflo 80L12A rated at 21 dBA is audibly louder at 12V. The
Panaflo is quieter at 5V; it is roughly at the same volume level at 7V. The
bare Barracuda IV on foam is difficult to hear 3 feet away. From 6 feet, it
is inaudible.

With an IBM DTLA 703045 (otherwise known as the infamous sudden-death-afflicted
75GXP). a 3-platter 45G model rated at 31 dBA, the noise suppression achieved
is more dramatic. Bare, the IBM is audible anywhere in the room. Enclosed in
Smart Drive, it is about as quiet as the bare Barracuda IV. Seven feet away,
it can hardly be heard.

The test was repeated with a 7200 RPM, single platter, 20G Western Digital
WD200BB rated at 32 dBA, with results similar to the the IBM. Smart Drive is
more impressive with both the IBM and WD hard drives, probably because they
are both fairly noisy and easily audible. SD drops the noise level down into
the whisper threshold. With the Seagate, the default noise is already at whisper
level.

While we don’t have highly sophisticated, expensive test equipment and a super
quiet environment to measure soft noises with high accuracy, we can
actually measure the difference in noise between the bare drive
and in the Smart Drive.

A picture is worth a thousand words, they say. How about a picture with words? 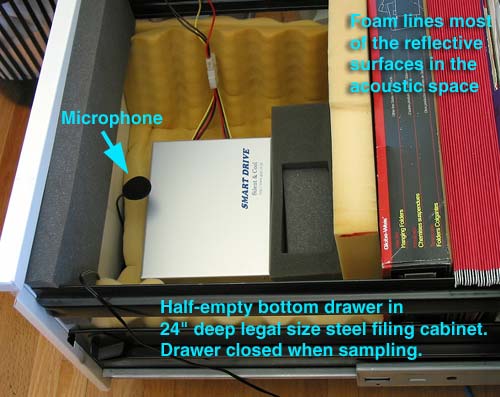 It’s a filing cabinet in the test lab. The half-full bottom drawer is lined
with foam to minimize reflections. The microphone is a cheap omni. The hard
drive is placed on the bottom foam and powered remotely with an extension from
an external PSU. The mic feeds into a SBLive! sound card and is recorded as
a WAV file using the very powerful Cool
Edit 2000 audio recording, editing and mixing software by Syntrillium.
The sonic isolation provided by the drawer is just 3-4 dB, comparing the mic
output inside and just outside the drawer. (A little isolation is better than
none.)

Does this “recording drawer” setup looks familiar? Not surprising. It’s the
same one used to measure the noise reduction of the hard
drive sandwich.

The mic is not calibrated, nor is its frequency response known. This does
not matter, however, as the only real significant data is the difference
between the red and blue curves, which represents the actual noise reduction
effected by the Smart Drive. The vertical scale on the graph as been positioned
only for convenient display; there is no absolute reference. In other words,
0 here is not 0 dBA. The dynamic linearity of the microphone is
never challenged; it is not an issue here.

The curves show the averaged frequency spectrum (21 to 22,000 Hz range) of
two WAV files 30 seconds long. The red line is the bare drive; the blue line
is with the drive in the Smart Drive. On average between 440 (middle A on the
musical scale) and about 12,000 Hz, the noise improvement is about 3-4 dB. With
the IBM 75GXP, the recorded level was more than 10 dB higher than with the Barracuda
drives; but the noise suppression achieved was very similar: about 3 to 4 dB.

Given the complexities of sonic measurements, these measurement cannot
be guaranteed to be repeatable elsewhere; take them as a guide to the Smart
Drive’s noise reduction, not absolutes. 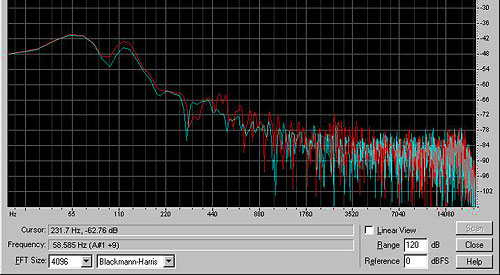 Red is the bare ‘cuda drive; blue is the ‘cuda in the Smart
Drive.

Silent PC Review’s Fanned Reference Standard PC, otherwise known as
Silent P3, was used to test the Smart Drive. Silent P3 is extremely quiet, inaudible
from the operator position except late at night when the ambient noise drops
to ~32 dBA. At that point, a tiny hum can sometimes be heard emanating from
the Silent P3. Its single hard drive, a Seagate Barracuda IV 40G, is normally
suspended in elastic in a 5.25″ drive bay.

When using the Smart Drive, it was mounted in place of the CD drive that normally
sits in the second 5.25″ drive bay. To ensure best cooling, a small air gap
was left between the front of the drive bay and the Smart Drive. 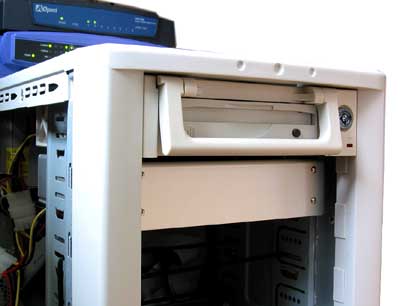 Noise in Actual Use

Listening comparisons were made between normal drive mounting of the Barracuda
IV, the Smart Drive, and the original DIY elastic suspension. The seated listener/operator
position is about 3 feet away from the PC under the desk.

Does it heat up the hard drive?

The worry about heat seems to be for naught. After several hours of working
on this web page with Dreamweaver and Photoshop while keeping half a dozen other
applications open, its internal temperature is 42C. This is actually 4°C cooler
than when the drive is suspended in elastic and only a degree hotter than normal
mounding in a 3.5″ bay. Through the course of an entire day, the highest temperature
recorded was 44° C, after a long series of hard drive intensive work.

heat generation is extreme as a feature of the turning at full speed HDD,
the above necessity heat the basket and others is designed to be the structure
which is not by designating the material of the product as the aluminum.

As to what this means, your guess is as good as mine. All I can conclude is
that the foam used as acoustic insulation in the Silent Drive has some of thermal
conductivity which allows the outside aluminum casing to benefit from both conduction
and air convection. This is a good thing.

Smart Drive is a useful addition to the arsenal of tools for battling PC noise.
While the price makes it more than a casual purchase for most buyers, there
is considerable noise reduction with only a small increase in temperature compared
to normal drive mounting. It combines many of the benefits of decouple-mounting
and DIY sandwiching without mess or fuss. The degree of benefit will naturally
vary with your ambient noise level, specific drive and the overall noise of
the PC.

With louder drives (>30 dBA), Smart Drive can bring the noise level down enough
so that it is no longer identifiable as a primary noise source in the PC. With
already quiet drives, it can virtually silence them. When used with the Barracuda
IV drive, Smart Drive is about as effective as decouple-mounting using either
elastic suspending or a foam bed and keeps the drive several degrees cooler.
The only minor downside is slightly higher seek noise, due to closer mechanical
coupling to the case.

Our thanks again to Silicon
Acoustics for the review sample!