Review: Swiftech MCX462-V for Socket A

The MCX462-V is the Socket A counterpart to the MCX478-V recently
reviewed by Ralf Hutter. It’s a clear continuation of the classic Swiftech heatsink
design: Thick copper base, with helicoid aluminum pins press fitted into the
base. But the “V” does bring a new twist to the design. Well, a
new bend, actually. As with the 478 model, the pins are set into concentric
circles, and bent at multiple angels to increase the airspace between the
pins. According the Swiftech, “The spacing and angles between the concentric
rows has been precisely calculated to optimize cooling at air flow levels
as low as 22CFM and 23dbA”

Seen next to the previous version, the MCX462+, the new V model looks significantly
larger. The apparent size increase is deceptive, for the bases of both are
3″ squares, which keeps it within the AMD height restriction area of
the motherboard. The splaying of the fins does allow for an extra benefit,
the use of a 92mm fan without an increase in the base area of the heatsink.
As with the 478-V, brackets for both 80mm and 92mm fans are included with the kit.

Well, after my review of the MCX462+,
which praised the classic Swiftech through-board retention mechanism for
being the most secure method of attaching a heatsink, and panned it for
being a giant PITA, Swiftech went and changed everything. 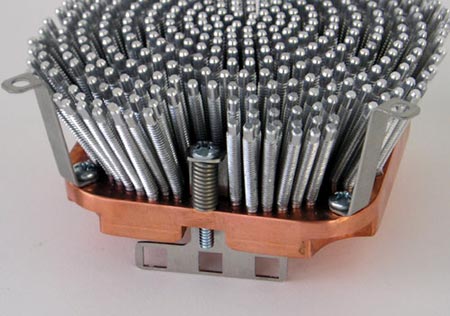 The new mechanism is a socket-only attachment, as opposed to the 4 bolt
of previous Swiftechs. It operates via a pair of 3 lug clips which snap
over the lugs as the heatsink is lowered vertically onto the socket. Then
the tension screw is loosened to gradually apply spring pressure to the
lugs, securing the heatsink at the proper tension.

This has the advantage of the old method by not requiring the motherboard
to be removed for mounting/unmounting. Not requiring the mounting holes also
expands the motherboard compatibility, as fewer and fewer socket A boards
have these holes. Also, opposed to traditional spring-clip lug mounts, this
system has the added safety of applying the pressure to the drop of the
die gradually.

After mounting and removing the V several times, I’m not completely sold
on the new mechanism. While more convenient than
through-board bolting, its not as simple a process as Swiftech suggests, or as smooth as other lug attachments. The problem lies in getting
the clips over the lugs. The clip doesn’t easily snap over
the top of the lugs as designed, and considerable fidgeting is required to
align it just right.

During the loosening of
the tension screws (which counter-intuitively tightens the heatsink onto
the CPU), I needed to squeeze the clips towards the socket to ensure that
all 6 lugs would catch. Without the squeeze, one side of the clip would twist
with the turning of the screw, resulting in only one or two of the lugs
being secured squarely. The same problem of clearing the lugs occurs when
removing the heatsink. After the springs are compressed the clips are still
aligned vertically under the lugs, so you can’t just lift the heatsink upwards
to remove it. Instead you need to slide and jiggle it around to get the
clips free.

A simple design modification would improve the entire latching mechanism:
Shape the clip/spring/screw mechanism so that as the clip is loosened it
splays outwards, away from the lugs, and pulls in and upwards, towards the
lugs, as the tension is applied.

But once applied and tightened, the MCX462-V is very secure, with no wiggle
or sliding around possible. (Although at a weight of 650g without fan, Swiftech recommends that the heatsink be removed for shipping)

There is also a review of the P4 (Intel) version of the Swiftech MCX478-V.

Swiftech has the finishing and polishing of heatsink bases
down to a science. There is simply no one doing it better. My comments from
the earlier review apply equally well here. So well in fact, that I’ll simply
report them again:

“As always, the finish on this swiftech is superb.
They really take pride in the finish on the mating surface, and it shows.
I can’t imagine that anything would be gained by trying to lap this thing
further, you’re more likely to end up making it worse rather than better.” 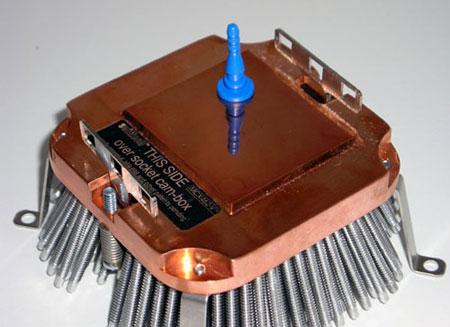 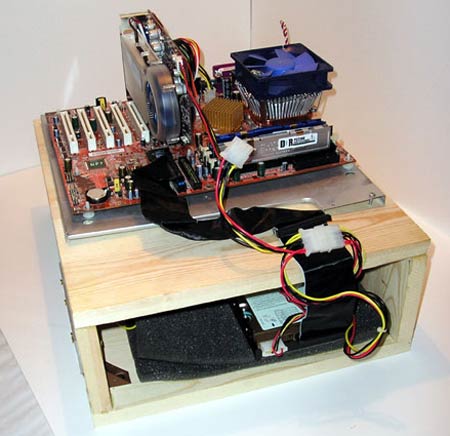 *Ambient temperature during MCX462+ testing was 21°

As Ralf discovered with the P4 version of the MCX462-V, a 92mm fan and an 80mm fan does not produce the results necessarily
expected. At its full 36CFM, the 92mm fan outperforms the 24CFM 80mm, but
not by much. It puts out 50% more air, yet results in only a 10% performance
gain. As the airflow drops, the performance difference narrows, until at
5v the extra 5CFM from the 92mm is of no help at all. The most logical explanation
for these numbers is the fact that the airflow from the 80mm fan is concentrated
closer to the center of the heatsink, where the greatest heat load is.

Compared to the previous edition,
the results are quite striking. Swiftech’s claim of
the MCX462-V being optimized for low airflow is not marketing hyperbole.
The temp reductions range from 2° at 24CFM, to an impressive drop of
10°at the 5v setting of 10CFM.

Overall, the performance of the MCX462-V moves Swiftech up closer to the top of the SPCR heatsink rankings, besting the perennial favorite Thermalright SLK-800
and falling behind only the heavyweights Thermalright
SLK-900A and Zalman 7000A. The MCX462-V is certainly a worthy improvement.

Much thanks to Swiftech for the review sample.

NOTE: Click here for a review of the P4 (Intel) version of the Swiftech MCX478-V.