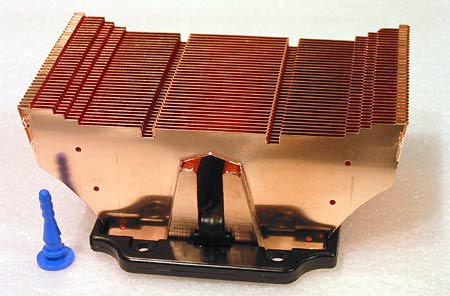 Thermalright’s new SLK-900U cooler works with both P4-478 and Socket-A motherboards. We eschew the monster 92x38mm 110 CFM Delta fan they offer with the new flagship heatsink and see how it does with our quiet reference fan at 12, 7 and 5V. Does the SLK-900U change our rankings? In a word, yes!

The Thermaright SLK-900U has been available only for a few scant weeks, and it is already developing a mystique as the new King of Coolers. It is shown above along side a 1″ tall fan mounting grommet for scale. Yes, it is a big one.

Review samples are hard to come by as demand is high, but online retailer Silicon Valley Compucycle (SVC) was able to help us with one from their very first batch. SVC currently has the unit priced at US$49.99. 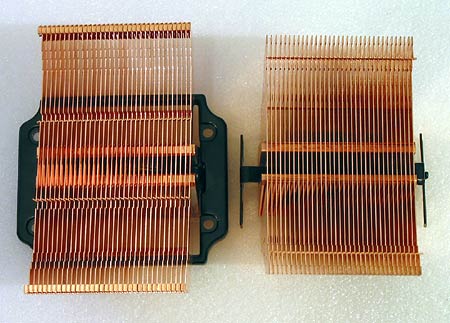 The SLK-900U should look familiar: it is essentially an enlarged SLK-800 (shown on the right in these comparative photos) with a modified mounting system to accomodate both P4 and socket-A processors. The “U” stands for universal. It has the same basic structure as the 800, a U-shaped tunnel through which a clip runs, and to which the fins are soldered. It has the same number of fins spaced fractionally farther apart, so that its overall width is a tiny bit bigger.

The weight as not that much greater than the SLK-800: 587 grams (in P4 form) versus 505 . But adding a 92x25mm fan does put it up to nearly 700 grams, which is getting up there. It’s still substantially lighter than the imposing 898 gram Zalman 6500B-CU, which is its natural main competitor among P4 heatsinks; till now, the Zalman has held the P4 cooler crown here at SilentPCReview.

The fins are shaped in such a way as to provide stepped notches that are perfect fits for 70mm, 80mm and 90mm fans. It is a tiny bit shorter, its fins some 3/8″ longer — this additional length is what allows the SLK-900 to accomodate a 92mm fan. The SLK-800 only handles up to an 80mm fan. The longer fins also make for a larger cooling surface area. I would guesstimate it to be at least 15% larger. 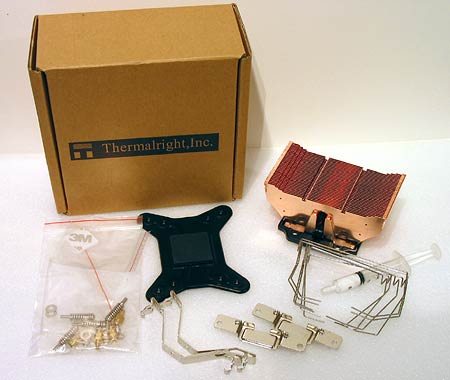 The SLK-900U comes in the usual nice sturdy brown cardboard box Thermalright uses for all its products (at least the ones I’ve seen). There is a large assortment of bits and pieces: 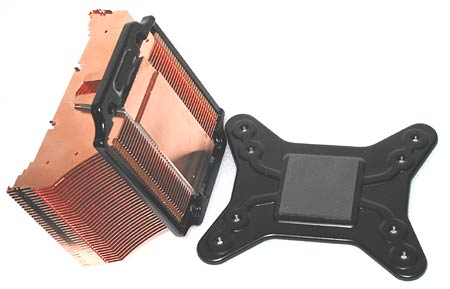 As delivered, the SLK-900 is ready for use in a Socket-A motherboard. To use it with a P4, steel flanges have to be screwed on, as shown in the photo below. This allows the use of the conventional quick mount clips or the through-the-board spring-loaded bolt mounting (much like Alpha and Swiftech). 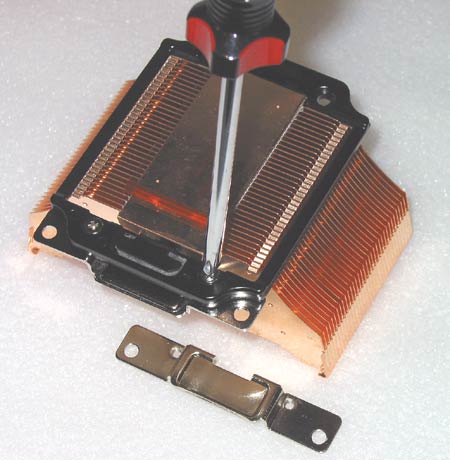 Here’s how it looks, mounted on a P4 system (with a Panaflo on top the wrong way, only in this photo, not during testing): 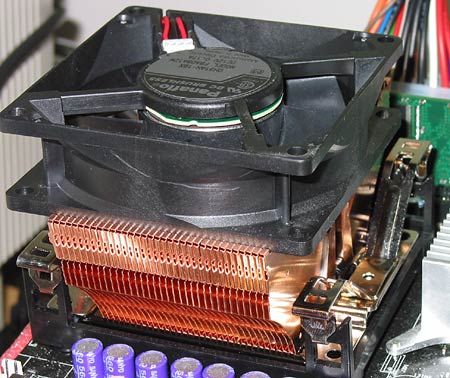 There was an issue with motherboard capacitors on the available socket-A (AMD) motherboards making contact with the fins. This is also mentioned in a recent review of the SLK-900 by System Cooling.com. They concluded,

…the SLK-900 would fit a number of different AMD motherboards, but it requires the end user to bend a few capacitors out of the way so that they do not come into contact with the fins of the SLK-900, thus allowing proper seating of the heatsink… This procedure is not for the novice, but for more experienced users and remember, you do so at your own risk. Bending them too much can cause damage to your motherboard.

Rather than force fit anything in a rush, an addendum to this review will be made when performance on a socket-A setup can be tested carefully.

Our standard low-noise, low-airflow HS testing methodology is used. The reference quiet Panaflo low airflow fan is used, at 12, 7 and 5V. This is the same fan and the same voltages used in previous HS reviews. The only variable is the cooling power of the HS itself; we’re not comparing fans. The question we seek to answer is how well the HS does with a very quiet fan. The same quiet fan is used for most HS (the exceptions being models in which the fan is tightly integrated with the HS).

Please read the caveats about P4 thermal diode accuracy on page 2 of the HS test methodology article. There is evidence to indicate the diode might read >10° C lower than actual core temperatures. At this time, we use the thermal diode to obtain CPU temperature information — like the vast majority of hardware sites. Other options, such as Intel’s P4 Thermal Test Vehicle (discussed in this Intel PDF document), are still being investigated.

The P4 HS test platform is an open system not enclosed in a case. The test platform and procedure is described in detail in our HS Test Methodology article.

The reference Panaflo fan was placed on top of the heatsink, blowing down, and CPU stress tests run at 12, 7 and 5 volts feed to the fan. Panaflo fan summary:

*dBA @ 1 meter sound pressure level is the most common industrial measurement for noise. The Panaflo is rated by the manufacturer at 21 dBA. Sound level meter systems capable of measuring accurately below 20 dBA are priced well over US$10,000. Furthermore, the ambient noise level must be lower than the measured source by at least several dBA. These factors make low noise measurments at one meter at the lower voltages is extremely challenging. Thus our fallback to the nearfield measurement technique, 1 cm from edge of fan frame, not in the airflow path.

The heatsink was cleaned and installed using the more convenient clip system, with Arctic Silver 3. The system was allowed to cool between tests for ~15 minutes. The ambient temperature was 20C throughout.

The idle temps are not reported because the highest was only 27C.

Just to check on whether a 92mm fan would make any difference, a PC Power & Cooling Silencer 92mm fan was also tried at 12V, as shown below. This fan has very similar noise characteristic as the Panaflo 80L and is rated for 27 CFM instead of 24. At first it did no appear that there was any difference, but later I realized that unlike in the other tests, I had neglected to let the CPU cool off between tests. 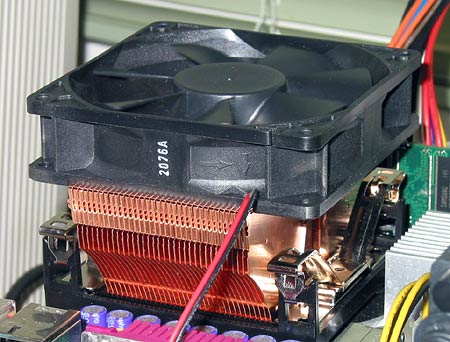 The test was rerun. There was a small difference in CPU temp with the PC Power & Cooling Silencer 92mm fan at 12V, which fluctated between 30C and 31C after half an hour of CPUburn at High Priority. The other benefit from the 92mm fan is that the increased area of airflow naturally helps to keep on-board components (such as the northbridge chip) a bit cooler and possibly more stable.

Here is the full set of data with the the PC Power & Cooling Silencer 92mm fan.

The differences may be too small to be significant. One of the issues with the PC Power & Cooling Silencer 92mm fan is that it does not feel like it has more airflow than the Panaflo 80L. It would have been better to use a Panaflo 92L, which would be assured of producing higher airflow. Of course, the noise prodiuced by the 92L may be higher than the 80L; this is something that would have to be investigated.

In any case, these are the best results seen thus far with any P4 heatsink on the SPCR test bench. Compare the results for the same tests on the Zalman 6500B-CU, the best performer in ourearlier P4 HS roundup:

After >20 minutes of CPUburn at High Priority

The SLK-900 bests the heavier Zalman 6500B-CU at all Panaflo fan voltage settings. It is not a huge margin, but consistent. With a larger 92mm fan, the SLK-900’s advantage will likely increase; with the right fan, this gain can be obtained with NO increase in noise level.

The Thermalright SLK-900 allows you to run quieter fans with hotter CPUs better than any other HS we’ve tested so far. Its size and need for through-the-board mounting on socket-A boards make it not quite as universal as Thermalright planned, but there’s no reason to belive it would not do superbly with low airflow in cooling an AMD processor.

If you already have a top-rank HS, changing to the SLK-900 will probably give you only marginal gains, But if you have been eyeing the heavyweights or want the best CPU cooling for the lowest noise system, it is the best tested at SPCR thus far.

Much thanks to Silicon Valley Compucycle (SVC) and Thermalright for the review sample.

SPCR Forum members expressed concern about whether the 92mm fan could be used with the standard P4 mounting clips. These had not been used in testing.

A quick check revealed that it is indeed a very tight fit, but it can be done –IF you have easy access to all sides of the HS during installation, as I did with the open bench mounting setup. If the motherboard is already mounted in a case, this would be VERY difficult,especially if the PSU is not moved out of the way. You may be able to see where the white arrows are in the photo below that the HS clips are pressed up tightly against the wire clips. The pressure may cause the HS clips to be less secure than usual. 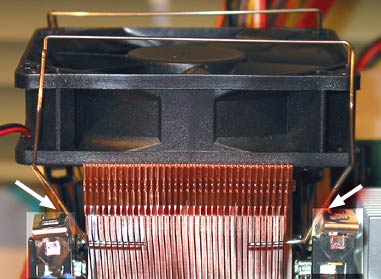 There is another simple way of getting the 92mm fan to stay on. Use flexible wire instead, and the holes that are higher up on the fin. A thin solid length of bare wire can be threaded the holes in the fins, routed through 2 mounting holes on the fan and the ends twisted tight together. Ditto the other side. It would be very much like using the provided wire clips. Or just take some pliers to the wire clips and see if you can make them go into the higher hole so they don’t touch the HS mounting clips.