An extensive review of the Zalman CNPS7000-Cu and -AlCu, the current top of Zalman’s extensive P4 cooler line. They depart from the last generation of Zalman’s top P4 coolers from by being radial rather than “fanned”, and by having an integrated fan rather than one on an extended overhead bracket. How quiet and how cool?

The CNPS7000-Cu and CNPS7000-AlCu have been the top of Zalman’s extensive CPU cooler line for a few months. They depart from the last generation of top performance P4 coolers from Zalman by being radial rather than “fanned” in a 180 degree arc, and by having an integrated fan rather than one on an extended overhead bracket. All the reports about their performance have been positive thus far.

We take a long look and listen at these latest iterations of Zalmans “flower” heatsinks. The obvious questions are:

As usual, we’re focused not just on performance per se, but performance at very low noise levels.

As with all Zalman products these days, the 7000 is well packed for retail display. It’s not ecologically friendly, but retailers are sure to like it for display sales. 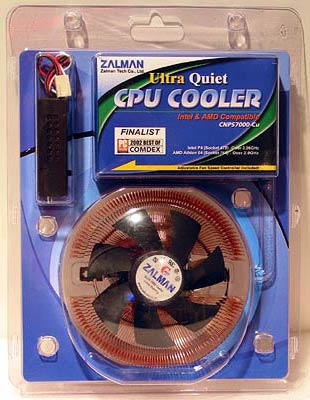 The package includes everything shown below (except the 1″ tall fan damped mounting isolator, placed on the heatsink base for visual scale reference): 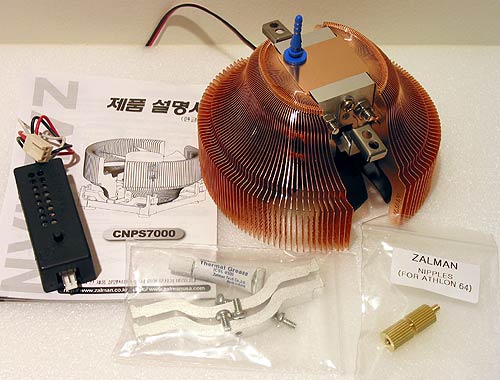 A closer look at this heatsink: 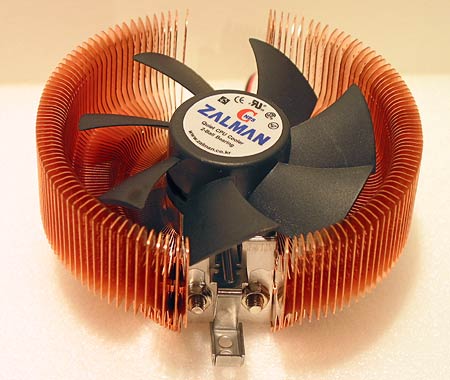 Aside from the obvious fact of an integrated fan and round shape, the 7000 has a number of commonalities with previous Zalmans: 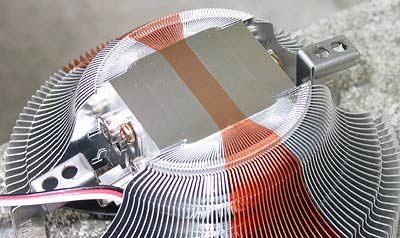 An unusual aspect of the 7000 is the use of screws and machined aluminum pieces to act as mounting clamps. In previous models, either spring-tension metal or plastic clips were used. Some variants were found to be too soft to work to retain the appropriate pressure needed over the long term.

The photo above shows part of the clip mechanism — the 2 lugs, one on either side, each with 2 holes in them are actually the ends of a more-or-less standard steel tension clip that is held captive in the HS. 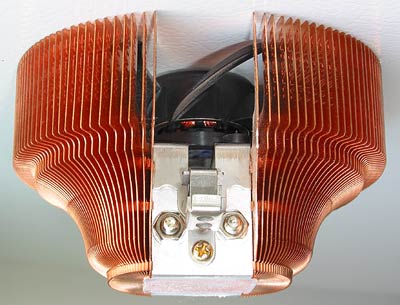 The photo above shows the large clamping nuts (+ bolts) that hold the fins together — do NOT loosen these! The smaller center screw holds the fan and center steel tension mounting clip in place. The photo below shows the HS with the fan & clip removed. 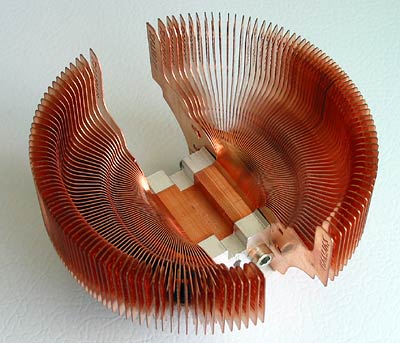 Below is the fan and captive clip assembly. Two small screws hold the fan in place. (Those who wish to swap the stock fan with an alternative will have to start with a 92mm fan and cut its frame away, then find a way to affix it to the metal frame of the fan / clip.) 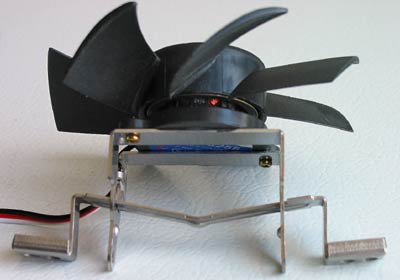 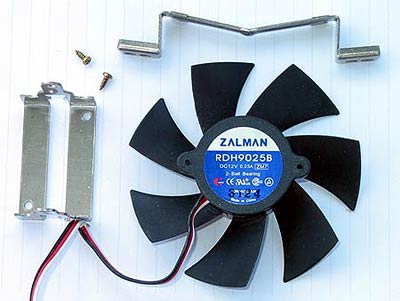 The steel tension clip feels much stronger and stiffer than the ones used for the Zalman’s 6000 series HS. The photos below shows how it combines with screws and machined aluminum pieces to hold the HS pressed tightly against the CPU. 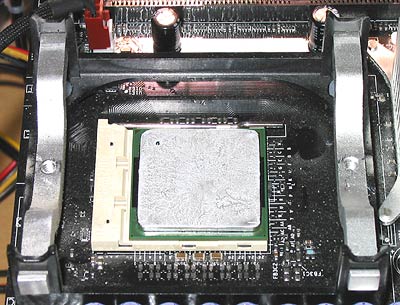 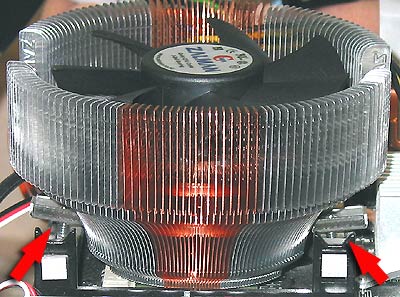 Once each aluminum “yoke” shaped piece is in place, a screw on either side of the clip pulls the ends of the aluminuim piece up against the corner tabs of the retention mechanism, pressing the HS and CPU tightly together. This is a very positive and secure system, and its weakest link is probably Intel’s plastic retention frame itself, which has never been reported to break, loosen or cause any trouble. 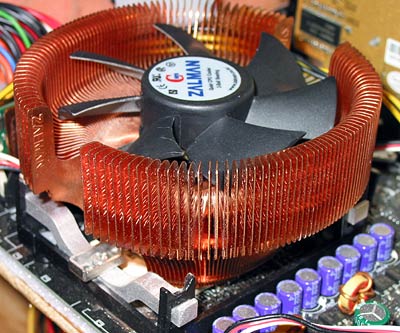 Full details of the installation details are nicely shown in Zalman’s How to Install Flash animation on their product page.

Several other unique aspects of the 7000 design deserve mention:

All in all, the 7000 design shows excellent mechanics and geometry.

The integrated fan in the Zalman 7000 series coolers does not allow the use of our standard heatsink testing method of a Panaflo 80L (80mm low speed fan) at 12, 7 and 5 volts. (This procedure allows heatsinks to be compared directly without the variable of different fan airflow / noise.) The integrated fan and Fan Mate 1 were used for the testing. 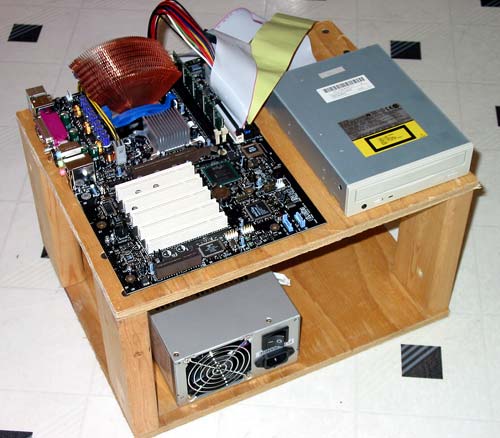 Intel P4-1.8A Northwood core – Nominal power is ~50W; may increase to 62.4W if speed throttling doesn’t stop it first. 67° C rated maximum junction temp. The plug will be pulled if any HS lets the temp go much above 60° C. For ° C/W calculations, 50W is assumed.

Any hard drive (in Smart Drive from Silicon Acoustics)

Two-level Plywood board with foam damping feet. Motherboard on top; most other components below. Eases HS changes and setup.

CPUBurn is the stress program used to load the CPU to 100%. It heats up the CPU a bit more than just about any other utility tried so far (including Prime95).

The heatsinks were cleaned and installed in turn on the test system as per the manufacturers’ and Arctic Silver’s instructions. The system was allowed to cool between tests for ~5 minutes with a large AC domestic room cooling fan running at full speed, the airflow directed over the entire test setup.

At this ambient temperature, the heat dissipated by the P4-1.8A is easily handled by either 7000 model in exactly the same way. It appears that copper’s natural heat transfer efficiency advantage is not showing up because both coolers are working well within their limits.

The character of the fan noise is benign, much preferable to the separate 80mm and 92mm fans Zalman has used thus far. It is mostly turbulence noise with a touch of buzziness at the sub-7V settings. This is somewhat surprising because the separate fans are sleeve bearing models while the embedded fan in the 7000 is a ball bearing design, which usually means a bit more noise.

Surprisingly, the performance at 7V is the same as at 5V. At 7V it is clearly noisier, slightly noisier than a Panaflo 80L at 12V. Naturally, as there is no gain in performance, the 5V setting is preferred here.

The performance at 10V (about the maximum clockwise setting on the Fan Mate 1), cooling performance moves into the champion class with 0.2 ° C/W. Cooling is improved by a degree with the move to 12V, achieved by direct connection to the motherboard header.

At above ~7V, the noise level becomes too high for SPCR, however.

This test was run to check the accuracy of the testing system, and also because the P4-1.8A may simply run too cool to be a useful gauge of real world heatsink performance as 800 MHz bus P4s move into the >3GHz range. The P4-2.53 (sSpec SL6EG) runs with a Vcore of 1.5V, a 533 mHz bus speed, and is rated at 61.5W. This CPU was dropped in place and run at stock presets in the standard Intel P4 motherboard / testing platform.

In theory, ° C/W should remain consistent for a HSF regardless of CPU heat and ambient temperature — at least within a range. Intel’s spec of 61.5W was used for ° C/W calculations with the P4-2.53.

The ° C/W results were very close but not identical to those obtained on the lower power CPU. The numbers were a touch poorer all around, but this is probably well within the margin of error in the system.

The same can be said of the differences seen between the AlCu and Cu models. They are essentially indistinguishable in performance with the P4-2.53 in this ambient as well. Certainly, the Zalman 7000 HSF has no problem cooling a P4-2.53 even at minimal fan speed settings. One suspects that with the very hottest CPUs or with higher ambient temperatures in a system installed normally inside a case, the copper version would perform better that the AlCu, especially with the fan at low speed.

Real world conditions are tougher than those in the SPCR lab. When a system is installed in an enclosed case, the ambient temperature is sure to rise at least 5° C, more often 10° C or even more, depending on particulars. Many quiet PC enthusiasts run systems with no case fan or just one low airflow fan. In consideration of these factors, low noise enthusiasts are urged to add 10° C to the test results when trying to guesstimate what their temperatures would be. Even better would be to measure the in-case temperature near the CPU fan and use the C/W figures to calculate likely CPU temperatures with these HSF.

It is best to regard the test results not in an absolute way, but rather, as comparative guidelines. The result obtained with this heatsinks will vary greatly on the particulars for each system.

This is about the best performance at this noise level (equivalent to a Panaflo 80L at ~9V) of all HS tested thus far. If you carefully examine the results for the Thermalright SLK900, you’ll see its temp rise with a Panaflo 80L at 9V would be about the same as for the Zalman 7000 at 5V.

While the noise level at 5V is higher than that achieved with a Panaflo 80L at under 9V, many will find it quiet enough. Despite the same rating of 20 dBA at 1 meter at 5V, the 7000 fan is subjectively much quieter than Zalman’s stand-alone 80mm and 92mm fan offerings. If you seek the lowest noise, you’ll have to find a way to slow the captive 7000 fan to lower than 5V, swap the captive fan for something quieter, or go with a HS that lets you choose your own fan.

It may not be a silent champ, but it is probably about as quiet as you can get while effectively cooling the hottest CPUs Intel is churning out these days. Given that it is as effective as the more expensive Cu version, and less stressful for the motherboard with its lower mass, the 7000-AlCu model is a bargain. Strongly recommended for power lovers who still want quiet.

The 7000 HSF and other fine Zalman products can be found at attractive prices at Sharka Corp.