While limited in expansion capabilities with just a single 120mm fan for airflow, the Rosewill Legacy U3 is compact for a microATX tower, and sports a pleasing all-aluminum exterior.

MicroATX is overshadowed in the DIY community by ATX, despite often being the
more pragmatic choice as users often use few if any of the extra expansion slots
afforded by ATX. While technology is constantly getting smaller, to the point
where some users have ditched their tower PCs altogether, microATX continues
to play second fiddle in the world of desktops. This is reflected in the range
of cases available, with most microATX models being plain generic towers from
budget/OEM manufacturers. There are a few handsome and enthusiast models but
the choices pale in comparison to the multitudes produced for ATX. The market
has apparently determined that microATX simply isn’t sexy.

One case seeking to dispel this notion is the Legacy U3, a model produced by
a surprising source: Rosewill, which began as the house brand of Newegg.
Store brand technology products are often regarded as cheap/unreliable, but
Rosewill has developed a fairly solid reputation among Newegg patrons.

One advantage of cutting out the middle man is lower pricing, with the Legacy
U3 selling for a mere US$90, a bargain for an all-aluminum tower. The
front of the case is striking as its brush aluminum facia is bereft of ventilation,
drive bays, or even a single crease of any kind, and the gentle curves at the
top and bottom are a refreshing change from sharp corners. The rather low position
of the front audio and USB 3.0 ports wouldn’t be ideal if the case were placed
on the floor, however. The side window is more attractive than most, as it takes
up almost the entire side panel, is more or less centered, and hasn’t been fashioned
into a weird/angular shape. Overall we’d have to say this is one of the most
elegant microATX case we’ve come across, with a sleeker exterior than the stoic
aluminum-clad fare from manufacturers like SilverStone and Lian Li. Along with
our sample black model , a Silver edition is also available.

No case is without its drawbacks and the U3’s derive mainly from its size.
It is small for a microATX model, standing just 35.9 cm (14.1 inches) tall and
measuring 27.0 cm (10.6 inches) from front to back, just over 20 liters volume.
Most microATX cases are closer to 30 liters and many are far larger than that.
While a tall/shallow shape is favored for larger NAS systems, the U3’s drive
support is limited to just 2 x 3.5 inch or 1 x 3.5 inch + 2 x 2.5 inch drives,
and optical storage is off the table completely. The short depth rules out long
graphics cards with the specified limit being 26.0 cm (10.2 inches). Cooling
may also be an issue as there’s only one fan position, the front bezel is completely
solid, and the power supply is positioned at the top of the tower and must draw
air from inside the case. To help increase airflow, ventilation has been provided
along the sides and underneath the case. The stock fan is a relatively quiet
120 mm model connected to a two-speed fan control switch.

As befits an online house brand case, the packaging is very plain with the
case shipping in a basic cardboard box unmarked with adornments aside from the
brand and name. The accessory box contains the necessary screws, long motherboard
standoffs (three of which are plastic), rubber grommets to dampen hard drives,
zip-ties, a PSU support bracket, a PC speaker, and an assembly manual.

There’s little to say about the quality of the internal construction, as it’s
mostly an empty space created by the enclosing panels. It’s reasonably well-built
for a small all-aluminum chassis. Aside from the drive mounts, the layout is
very simple and traditional, with the power supply at the top back corner. Compared
to a bottom-mounted PSU case, the CPU and PSU tend to be subject to more thermal
stress than the GPU.

Assembling a system inside the Legacy U3 is straightforward, but the compact
dimensions aren’t ideal for the clumsy or thicker-fingered. Putting everything
together is somewhat challenging, especially if a microATX motherboard is used,
as the entire case itself is not much deeper than the width of the board.

The Legacy U3 is equipped with a single 120 mm exhaust fan with a nondescript
design, and a basic fan controller with two speeds and an off switch. The stock
fan is a slow model: 1100 RPM on high speed and a mere 560 RPM on low. On low,
it generated an SPL of just 12 dBA@1m, which is quieter than most noise-producing
components. On high, it emitted 20 dBA@1m, which is similar to what our standard
microATX test system puts out while sitting idle in the open. This is great
for those concerned about noise but a faster fan would appeal to more users,
especially as it’s the sole case fan. The low setting is basically useless as
the fan runs too slow to move much air. Any reasonably powerful fan-cooled video
card will likely drown out the high setting during load. 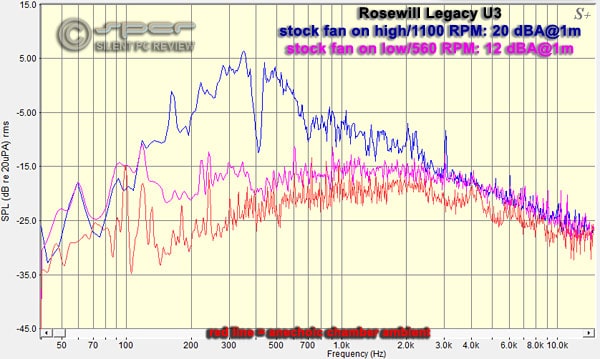 Not only is the stock fan quiet, it has a very nice sound as well. On low speed,
its acoustics are completely benign with a primarily broadband profile. On high
speed, it develops a moderate hum and slight clicking audible up close but it
is still generally quite smooth.

While we were concerned about the effect of impeding the airflow with a bottom-mounted
hard drive, our test results were surprisingly good. Sitting idle with the exhaust
fan set to low, everything ran cool and machine was relatively quiet. The CPU
stayed closed to the 30°C mark and the GPU didn’t exceed 40°C, while
the total noise output was 21~22 dBA@1m. On full load, the CPU temperature rose
to 75°C and a GPU fan sped up to 2350 RPM to keep the GPU at ~90°C;
in this state the machine was 4~5 dB louder. Switching the exhaust fan to full
speed helped considerably, cooling the CPU and hard drive by an additional 4°C
and 3°C, respectively, and allowing the VGA fan to be slowed by a significant
450 RPM. This cut the noise level substantially to just 24 dBA@1m, not much
louder than idle state. 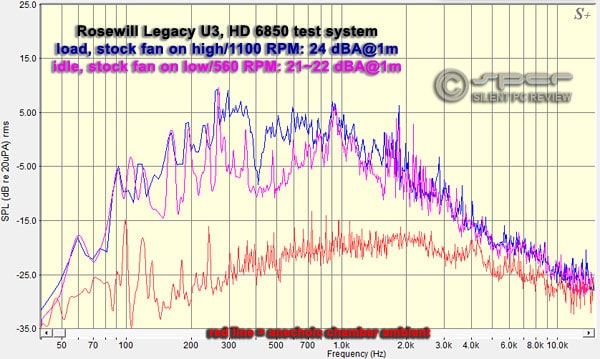 The combined noise of the stock fan and components was generally pleasant when
the system was idle, though at closer proximity, the growly tendency of the
HD 6850’s small fan was more clearly audible. At distance, the sound was soft
and gentle with just a hint of a hum, without noticeable hard drive vibration.

For our second test configuration, we moved the hard drive to the side and
rotated the CPU cooler (to avoid interfering with the drive bracket). In idle,
there wasn’t much change, aside from a slightly hotter CPU and hard drive, but
on load, things got interesting. Removing the hard drive from the floor opened
up a lot of airflow and gave the graphics card much needed breathing room. The
GPU temperature was well under 90°C even with the GPU fan at minimal speed
(note: a quirk of the card’s fan control system allows it to run
slower on load than idle). However, turning the CPU heatsink made it less effective
and its new orientation caused the fan to suck up hot air coming off the graphics
card and blow it directly into the power supply above. So while the GPU fan
speed was lower than when the system was idle, the power supply fan went into
overdrive, bringing up the overall noise level with it. The hard drive also
ran hotter due to its higher position in the case, lack of ventilation, and
proximity to the video card. Speeding up the exhaust fan had a much smaller
impact than the first configuration, though the net effect was positive for
both heat and noise. 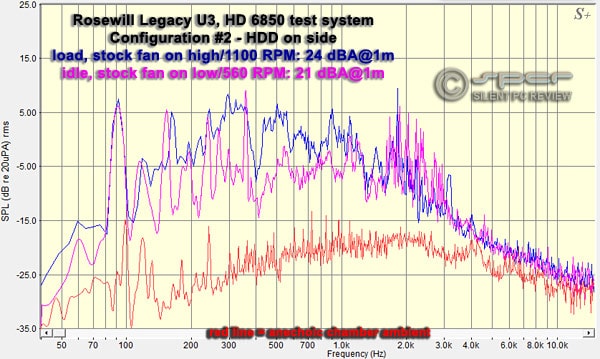 The overall noise level was similar to the first configuration, but side
hard drive mounting made its vibrations audible. Compared to bottom hard drive
mounting, the 90 Hz peak created by the motor’s 5400 RPM speed rose by more
than 10 dB, imbuing the system with a noticeable hum. The acoustic profile
wasn’t that different but it was more audible than the first configuration.

With the hard drive mounted on the bottom, the Legacy U3’s thermal and acoustic properties were similar to that of another compact microATX case, the SilverStone Sugo SG09.

When we boil down our microATX case test data to just the most
important aspects (CPU and GPU temperature, overall noise), Fractal Design’s
Arc Mini R2
and Define Mini towers
remain the top performers, followed by SilverStone
Temjin TJ08-E. The Legacy U3 performance is average but it’s an impressive
showing by the smallest case with the least amount of forced cooling (just one
120 mm fan).

Rosewill has produced an attractive microATX case. The Legacy U3’s aluminum
composition and solid top and front faces gives it a touch of luxury lacking
in most competing models. We generally don’t favor side windows, but the U3’s
window has a pleasant look due to its large size, shape, and near-symmetrical
placement on the panel. The interior design does well to compensate for the
lack of direct intake airflow, allowing it to achieve effective and efficient
performance relative to its 20 liter volume. There are several microATX cases
that can deliver better thermals and acoustics but none come close to the U3’s
size; the case is closer in volume to a medium-sized mini-ITX case than a typical
microATX tower. The stock fan has an innocuous sound and is very quiet, so quiet
that the included fan controller isn’t necessary for all but the quietest of
builds.

What the U3 lacks is flexibility, primarily due to its very size. Drive support
is restricted and the options it offers for 3.5 inch hard drives have downsides.
The bottom position blocks a significant amount of ventilation for the graphics
card, while the side bracket is susceptible to hard drive vibration and interferes
with large side-blowing tower heatsinks. Choosing between the two may boil down
to which components can better handle extra thermal stress, the GPU or the CPU/PSU.
Longer graphics cards are not supported and even cards in the 9.5~10 inch range
are a tight fit due to case geometry.

The Rosewill Legacy U3 currently sells for US$90, which is pretty good
considering its all-aluminum construction. It’s perfect for DIYers looking for
a microATX solution with a small footprint, so long as you understand its limitations.
It’s not well-suited for high-end configurations or tons of storage, but with
modest components and proper planning, a relatively cool and quiet experience
is easily attained despite its size.

Our thanks to Rosewill
for the Legacy U3-B case sample.