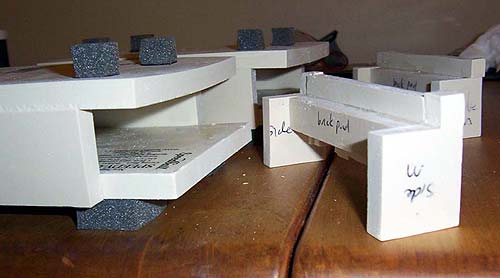 Two more HDD silencing techniques for DIY: LeoQ’s Rubber Box for obnoxiously noisy drives and MikeC’s Carved Foam decoupled mounting for the Barracdua and other quiet drives that still vibrate. May be worth a read even if you’re not a DIYer.

Leo’s challenge was to silence two Maxtor D740X Hard Drives, a 1-platter 40 GB model and a 2-platter 80 GB. Although these Maxtors are available with Fluid Dynamic Bearing motors, like the very quiet Seagate Barracuda IV drives, Leo’s were both all-bearing models. Maxtor provides a general noise spec of 3.0 Bels in idle and 3.5 Bels in seek. (But one-platter drives are usually quieter than 2-platter drives.) These numbers don’t seem bad, but they are nearly 1.0 Bels worse than the Barracuda IV’s, and their basic qualities includes a dollop of that nasty whine so prevalent with 7200 RPM drives. In short, they are very noisy drives, typical of the highest performance models.

The reference level for the two Maxtor drives mounted normally in 3.5″ drive bays in the front of the PC case was measured with an old analog Radio Shack sound level meter to be 70 dBA. The position of the recording microphone was between the two drives, within 1/2″ of either drive. The maximum temperature of the 40G drive was 38C; that for the 80G drive was 34C. The drive temperatures were obtained using the S.M.A.R.T. based utility called Drive Temp.

Enclose the drives to shut them up was the approach taken . After much experimentation with many different techniques and materials for a noise reduction box, Leo concluded that:

1) hard drive noise noise leaks wherever there is a gap in the sound barrier, and

2) hard drive noise comes though the walls of the box itself.

To deal with noise leakage, gaps in the enclosure simply had to be eliminated. To select the most sound proof maternal, Leo ran a test on five different inexpensive materials:

The Test consisted of a clock radio tuned in to an unused AM radio band that contained a lot of broadband noise, essentially a type of pink or white noise. The various materials were placed on top of the radio which has a speaker pointing up. The sound level meter microphone was positioned 5″ above the radio. The following measurements were taken.

The block print carving rubber was by far the best, providing nearly 20 dBA of noise attenuation in the simple test above. The measurement corresponded with what Leo heard.

An enclosure was built for each of the two drives. Each box measures 4.75 x 1.75 x 7 inches. The pieces were cut up using a utility knife with a fresh sharp blade. Maxtor’s drive dimension specs were used as the inner dimensions for the box. The first adhesive tried was rubber cement but it did not work well. It simply peeled off when dry, taking a thin layer of the rubber off. Super glue was tried and found to work well. It may penetrate deep enough into the rubber for proper adhesion to occur.

A cover allows the IDE cables and power wires to be fitted snugly for minimal noise escape. The boxes are sized so that the drive fits tightly, ensuring maximum heat transfer by direct conduction. Before the drives were inserted, thermal grease was applied liberally on the top, sides and front surfaces of the drive. The boxes were placed one on top of the other at the bottom front of the case on a bed of foam to decouple them from the case. The cost of each box was approximately US$10. 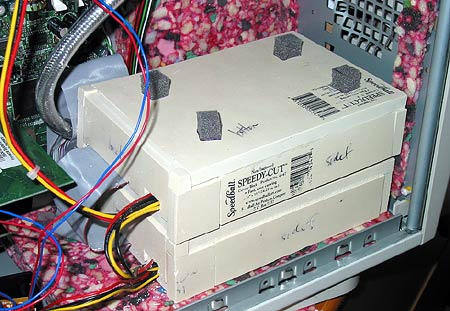 With the drives in the rubber enclosures as shown above, the noise reduction compared with standard mounting was very dramatic. The high pitched whine of the drives just about disappeared. It also measured over 20 dBA lower with the sound level meter positioned similarly. However, the temperature went up almost as dramatically:

Maxtor specifies 55C as the maximum safe operational temperature for these drives. So while the noise reduction was wonderful, the increase in heat put the drives right at the edge of safety.

Leo tried wrapping the rubber boxes in a skin of decent gauge kitchen aluminum foil, hoping the better conduction property of the aluminum would help dissipate the heat more effectively, but that did not change a thing. In the end, he settled on the most expedient and logical strategy: Extra forced air cooling with a fan. Given the positioning of the rubber boxed HDDs directly in front of the intake case vent, it was the obvious thing to try.

The fan chosen was the popular low speed Panaflo L1A 80mm. It was decouple-mounted to the front case vent directly in front of the hard drives and set up to run at 6V. At this voltage, it is virtually inaudible, and no change in dBA could be measured with the sound level meter. It likely blows only around 10 CFM against the impedance (or obstruction) of the rubber boxes. Yet the temperature improvement was dramatic:

These are certainly acceptable temperatures and makes the rubber box perfectly safe to use.

Leo’s HDD noise reduction rubber box is a highly useful addition to the silent computer enthusiast’s range of tools. It must be used in conjunction with

When used in this fashion, Leo’s rubber box provides the highest level of noise reduction for a hard drive, superior to any other device known to me, commercial or DIY. Having heard what it did to the racket of Leo’s dual Maxtors in his now quiet dual-MP workstation, I am convinced. One can expect a Seagate Barracuda IV drive to become virtually silent in the rubber box.

Mounting a vibrating or noise-making device in such a way as to minimize the mechanical coupling with the computer case is a fundamental technique used for noise suppression. It is not a new idea — it was probably known about when the very first mechanical engines were created centuries ago.

For hard drives, an authority none other than Seagate states that a drive that sounds quietest while suspended in an acoustic measuring chamber may actually sound louder when mounted in a system, while a drive that sounds quietest when in a system may not be the quietest when tested stand-alone. This is due to the role of structure-borne acoustics (See Seagate’s technology paper on HDD noise for full details). This is why devices like the NoVibes drive mount and my home-brew suspension with elastic for clothing work so well to quiet hard drives that don’t have much airborne noise, yet do vibrate.

Many SPCR do-it-yourselfers have rigged up elastic suspensions and report great results. But there are cases that are not friendly for rigging up an elastic suspension, due mostly to space and mechanical considerations, and elastic tends to wear over time.

In a recent project, I was faced with this very challenge. I wanted to suspend the Barracuda IV 40G HDD at the bottom front of the case to take advantage of airflow from the front intake vent. But the 3.5″ drive rack extended from the floppy drive location all the way down to the floor of the case. It was permanently attached. So there was no room to suspend it in the normal horizontal position.

A recent RMA’d drive had been shipped back in a box with a ridiculous amount of egg-carton shaped foam. That gave me the idea of carving it up and using it to cradle the drive vertically at the bottom of the 3.5″ drive rack.

A picture is worth a thousand words. How about three pictures? 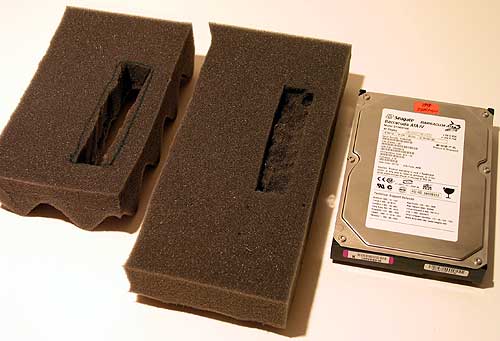 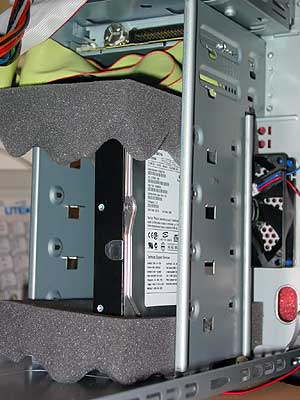 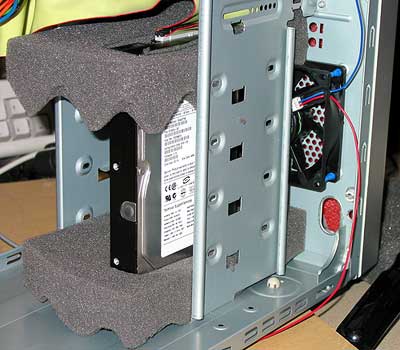 Does it look simple? Well it is. It took 5 minutes to accomplish with a sharp utility knife and a pair of scissors. The photographs took longer! The bottom piece has a niche for the drive to sit in; the hole in the top piece holds it in place and stops it from falling over. The foam pieces are cut so they fit tightly in place. In fact, the assembly is stable enough that I put the complete PC in my car (on the floor) and drove it 10 miles without any change or shift in position noticed when I opened it up at the destination.

Does it work as a decoupled mount? Yes, but it is somewhat dependent on the softness of the foam. The type used here is not as soft as others I have used for similar things in the past. It transmits a touch more low frequency vibration into the case than an elastic suspension, in the form a low level hum that becomes audible late at night in a quiet house. However, with softer foam, it should be on par with an elastic suspension. The foam also absorbs a bit of higher frequency noise, which does not hurt.

What about heat? I expected it would heat up a bit more with the foam around the ends, so I installed a Panaflo 80mm L fan with elastomer grommets on the front intake hole directly in front of the drive. It is rigged up to run at 6V — the noise is audible but only if you get close enough to also hear the drive (maybe a foot or less from the front of the case). The drive temperature is maintained to a safe maximum of 40C or less under all operating conditions in a room of 20-22C ambient.

Give this carved foam drive mount a try in your next project. It is simple, cheap and effective to silence a Barracuda IV almost completely.