Run a Power Supply without a Fan?

This is a question often asked but rarely answered. In this exploratory article, we present temperatures of an Enermax PSU’s heatsink with and without fan, under a defined and measured load, in different positions. Following where the questions lead brings us to some surprising answers!

It’s no news that power supply units are one of the major noise sources in
a typical PC. We’ve looked at modifying a PSU for quieter operation in another
article, and we will soon be examining power supplies designed specifically
for operation without forced air cooling.

One related question that comes up repeatedly among silent PC enthusiasts is:
Can I run a normal PSU without a fan? Certainly most power supply fans
seem to spin far faster and noisier than necessary, and they sure make a lot
of noise. It is a valid question that many have asked and few have answered.

One answer comes from pioneering PC-silencer Cub Lea, who wrote in his web page, Shut That Damn Thing Up!:

Let’s begin by dealing with what is likely the most significant noise
producer in the average PC: the power supply fan. The sooner you can get rid
of it, the better.

But he added immediately thereafter:

If that notion scares you, that’s good. If it doesn’t scare you, you probably
never got a basic grounding in PC maintenance. There are some circumstances
where it is a little too scary…

While Cub was able to run his PCs fanless for years, it must be noted that
these systems were all low powered by today’s standards, the hottest CPU being
a Celeron 300A , rated at just 18W heat dissipation.

A few in the Yahoo! Silent-PC group have reported successfully running PCs
in which the PSU fan is removed. Some have placed the PSU outside the PC case
to ensure adequate cooling.

What Happens Without a Fan?

There is little in the way of repeatable documentation of what happens when
a normal ATX power supply is run without any fans:

Terry Gray, the author of Building
a Silent PC: My Quest for Quiet, suggested recently that
perhaps one could look at heat sink temperatures in a decent PSU with / without
(much) load, and with / without fan. This is pretty much what I have done here,
albeit only with a load. This is by no means a conclusive test, as it
examines only one power supply among the hundreds available, in one particular
environment. It is merely an experiment. 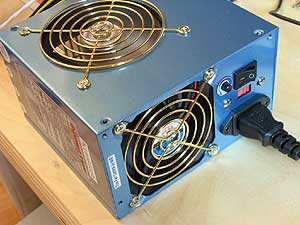 The photo below shows the positioning of the thermal sensor in the PSU between
heatsink and coil. 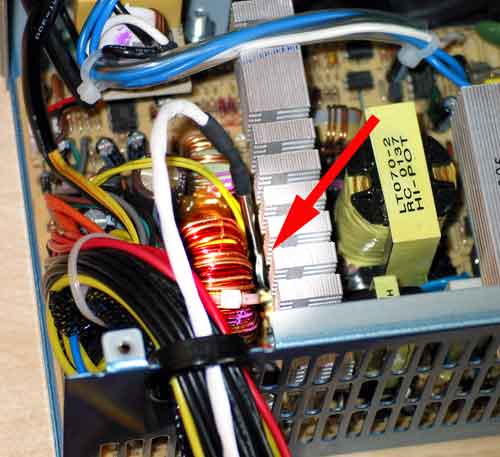 The load on the PSU comprised of the following system, running CPU Stability
Test 6.0 on :

This system was setup open on a test bench for ease and flexibility of testing.

The measured AC power consumption under this load was a steady 53-55 watts,
admittedly very low. Enermax specifies the efficiency of this PSU to be at least
70% at full load. Efficiency here is defined as the amount of AC electrical
power input that is converted into DC output. The power that is not converted
into DC output is lost as… heat. Whether efficiency is higher or lower at
less that full load is not specified, so using the 30% figure, this means the
PSU has to get rid of ~16.5W of heat generated at this load. It could well be
higher, perhaps it’s closer to 20W.

Whatever the heat output, run normally, the Enermax does an excellent job of
keeping cool at high or low loads, whether the outside fan is set to its lowest
or highest speed. The temperature remained at ~30C for a good 2 hours, during
which time I used the system for a variety of tasks.

Results: Not so Cool

The temperature of the PSU was at 30.5C when I disconnected both fans and removed
the cover. The graph below shows what happened. 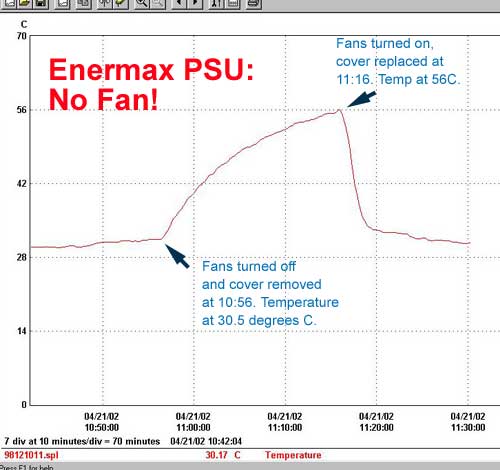 The temperature reached 56C in just 20 minutes. It was still climbing slowly
when I connected the fans back up to prevent any possible damage. The Enermax
specification about its operating temperature states:

If the output capacity of the unit drops to ZERO at 70C, then what is its capacity
at 56C? Or 60C, which would have come soon? I didn’t want to find out. This
Enermax still has lots of other work to do before it is allowed to melt down
to that electronic parts nirvana in the sky!

All kidding aside, I stopped the test because I was beginning to smell that slightly acrid tinge of electronic burning in the air. Whether it’s PCBs or something more benign, that smell always makes me a little nervous. (Come to think of it, maybe it was the hot glue used to attach the internal thermistor on the coils.) But if you examine the graph carefully, you’ll see that the curve was not rising so quickly by the time the test was stopped. It might have stabilized a bit above 60C or so.

What Are Temps with Low Airflow Fan?

The above results begs the question of what temperatures are reached when a
Panaflo 80mm L1A or other low noise, low airflow fan is substituted for the
loud, fast stock fans in most PSUs. As the thermal probe for the Veriteq was
already jammed in place, it was a simple matter of removing the 80mm fan and
speed adjustment assembly, drop in a Panaflo, connect it to an IDE connector,
replace the cover with a closed one (instead of one with a hole) to better simulate
conditions inside a case, and start recording. All other conditions, including
the CPU stress program, were the same as before. 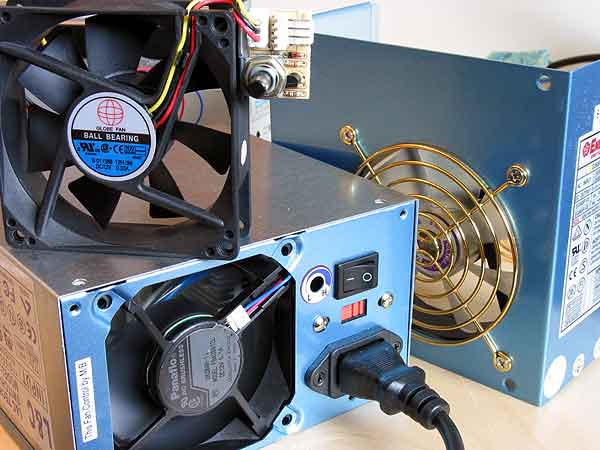 The results are shown on the graph below. The room temperature was slightly
lower than before – 20C instead of 22C. The stress test was begun at about 16:03
with the Panaflo at 12V. At 16:06, the fan was switched to 5V. The temperature
rose steadily, then hits 34C in about 20 minutes, at which point it stabilized. 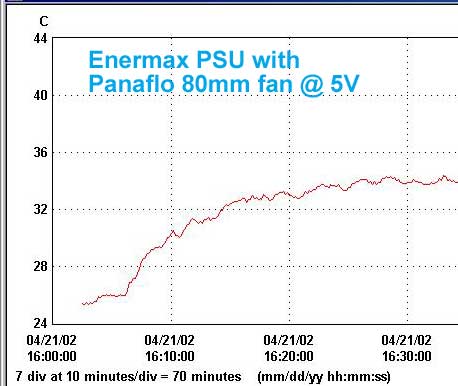 There has been conjecture that the quiet effectiveness of the Zalman PSU
is related to its relative lack of intake ventilation holes. Unlike many PSU that have many ventilation slots, the Zalman has them only on the side opposite the exhaust fan. Some believe this cause a kind of
tunnel effect in which the air is forced to follow a narrower path
through the PSU, thus causing a kind of tunnel effect in which the airflow is
actually accelerated, with the assistance of natural warm air convection.

A simple test of this theory was conducted by taking the top cover (with no holes) off.
The resulting graph is shown below. 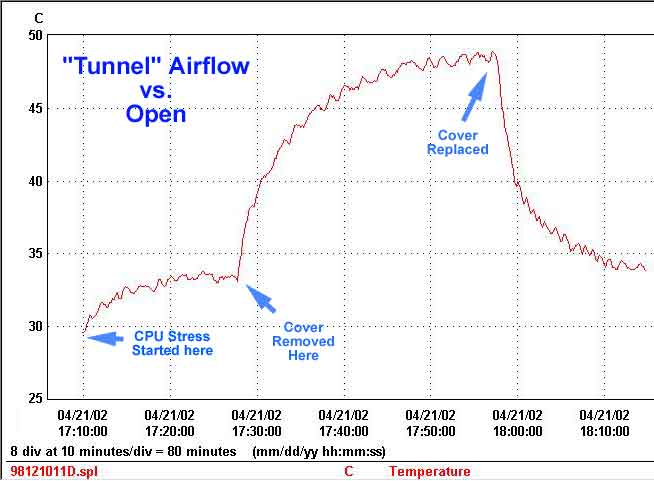 On the surface of it, the theory seems to be confirmed here, as the temperature
jumps 10 degrees in 5 minutes after the cover is removed and climbs all the
way to 48C before stabilizing. Putting the cover back on has the even more amazing
effect of lowering the temperature dramatically by 10C in 5 minutes.

This data makes me question the validity of the first set of data, run fanless
and with the cover off. Perhaps I need to rethink the effect of convection. 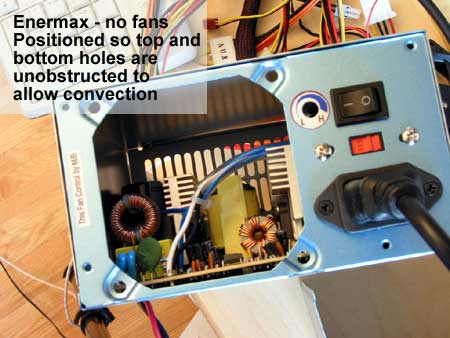 This time, after removing all fans and putting the solid cover on, I positioned
the PSU so that both back (outside) and front (inside) vents were unobstructed.
The back became the top, and the front became the bottom. This way, as hot air
rose, cooler air could be drawn in from the bottom. How did it work? Same conditions,
here is the graph. 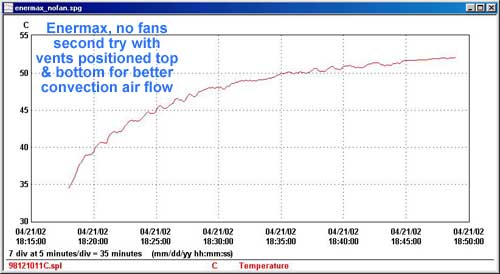 It’s much better, taking half an hour to reach 52C. Nearly 20 minutes beyond this graph,
it was still hovering around 52.5C, so certainly, the temperature seemed to
have stabilized. Still, 52C is a pretty high temperature, and with all the added
heat, there is definitely a higher chance of earlier failure.

Yet another experiment was to simulate what happens with a modded Enermax
PSU when installed inside a typical tower PSU over a hot CPU. In this case the
CPU was not that hot, being a VIA C3-933 that only dissipates around 10W. Still,
it was cooled by a passive heatsink only, and a fair amount of heat could be
felt around the CPU. I removed the 92mm fan from the cover, put the cover on
the PSU, then placed the assembly so that the 92mm hole was about 1″ directly
over the CPU / heatsink.

The result? No graph is shown because the effect was very simple: Temperature
rose 5 degrees in about 10 minutes, then stabilized at 42C temperature.

It was a little disappointing to discover that this Enermax does not appear
well suited for operation without fans. Considering the designers equipped it
with two fans, perhaps I should not be surprised. In the nutshell:

There’s little question that long term reliability would be affected if fanless operation increases operating temperature from a nominal 30C to over
50C. As to what happens if /when a PSU fails, I have one friend who says a PSU
“took out” his motherboard when it died. More on this topic another time.