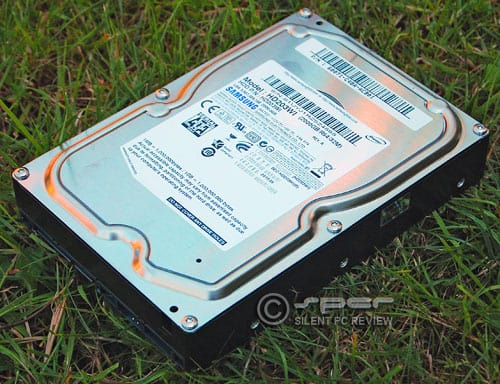 In contrast to Samsung’s highly visible marketing efforts in other sectors, its hard drives run virtually stealthed in the marketplace. They’ve long been prized for low noise by SPCR aficionados, however. We tackle the biggest of their F3 EcoGreen models, in response to popular demand.

The Samsung EcoGreen is one of four lines competing in the green, quiet HDD
space, the others being the WD Caviar Green, and Seagate’s Barracuda LP and
Pipeline LP series. The EcoGreen drives, like the WD Caviar Green, spin at 5400
RPM, while Seagate’s LP offerings run at 5900 RPM. Seagate is a relative newcomer
to the sub-7200 RPM 3.5" HDD consumer/desktop market; SPCR’s own forum
members have a much longer history with the Samsung and WD green offerings.
The 2TB EcoGreen is the highest capacity model in Samsung’s lineup at the moment.

Why the EcoGreen 2TB is called F3 instead of the previous F2 is not particularly
clear from Samsung’s marketing or technical releases. The fact that there is
a SpinPoint 7200 RPM series also tagged F3 makes it even more confusing. It
has the same 500GB/platter density of earlier F2EG and very similar specifications.
A newer EcoGreen F4 clearly boasts higher 667GB/platter density, and a new 2TB
F4ED features just three platters.

In any case, the 2TB F3EG is very similar to the Western
Digital’s 2TB WD20EADS, which remains — more than a year after
our review — on our Recommended HDD
list as the quietest and highest capacity drive. Can the 2TB EcoGreen F3 match
or surpass the WD?

Samsung is totally stingy about HDD samples for reviewers, and most of our
previous samples have come from direct purchases or loans from stores and readers.
The purchase of this HD203WI sample from Newegg was funded by our new Donate
for Review program. Much thanks to forum members klankymen, frenchie,
sea2stars, and BillyBuerger for the generous contributions to
make this review possible.

Our samples were tested according to our standard
hard drive testing methodology. As of mid-2008, we’re conducting most acoustics
tests in our own 10~11 dBA anechoic
chamber, for more accurate low SPL readings than before. Our methodology
focuses specifically on noise, and great effort is taken to ensure it is comprehensively
measured and described. Performance is covered only lightly, for reasons discussed
in detail in the methodology article.

Ambient conditions at time of testing were 10.5 dBA and 23°C.

There were high expectations for the acoustics of the HD203WI because Samsung
has been a silent HDD leader for many years. We’re a bit disappointed this time
around. Sitting on foam to take vibration out of the equation, its noise profile
was very quiet but not record breaking. Compared to the WD Green 2TB, there
is a greater "hollow" aspect to the sound, which seems to be caused
by somewhat prominent peaks in the 1~2.5 kHz band. It seems more tonal than
the WD, which sounds largely broadband. The 2~3 dBA idle noise difference is
definitely audible, though that difference will be less audible inside a computer
case. Seeks were distinctly audible, where as the WD’s seeks were very muted.
Our sample arrived with AAM turned off. Turning it on to minimal noise with
HDD Scan 3.3 resulted
in very subtle changes that moight have amounted to a 1 dBA reduction at best.

It’s no surprise that a 4-platter HDD has a bit more vibration than the best
on our recommended list. While it’s not bad, on par with the WD Caviar Green
2TB, there’s no doubt a mechanically decoupled mounting will reduce vibration-induced
noise in most PC cases. The power usage is low, better than average for a "green"
drive, a bit better than the 2TB WD Green, and substantially lower than a typical
7200 RPM model.

The speed of the 2TB F3EG on HD Tach was a touch higher than that of the 2TB
WD Green, but sgnificantly slower than the 2TB Seagate Barrucada LP, wiht its
higher 5900 RPM spindle speed. It stands in the middle of the pack.

The HD203WI’s performance is close enough to its closest competitors that differences
are not likely to be noticed. Minor differences in computer component performance
rarely get noticed in actual use. It usually takes a number of faster or slower
components working in tandem to see a significant general difference in PC performance.
For those seeking a more detailed performance analysis, here is Storage
Review’s review of the Samsung HD203WI.

The airborne acoustics of the Samsung EcoGreen F3 2TB are middling to high
for a low power drive, and its level of vibration is similarly middling. Power
consumption is low for a 2TB drive.

The recordings are intended to give you an idea of how the product sounds in
actual use — one meter is a reasonable typical distance between a computer
or computer component and your ear. The recording contains stretches of ambient
noise that you can use to judge the relative loudness of the subject. Be aware
that very quiet subjects may not be audible — if we couldn’t hear it from
one meter, chances are we couldn’t record it either!

The recording starts with around 10 seconds of ambient noise, then 10 second
segments of the drive in the following states: idle, seek with AAM enabled (if
applicable), and seek with AAM disabled (if applicable).

Our sample of the Samsung F3 EcoGreen 2TB HD203WI proved to be
fairly quiet but not exceptional acoustically. Its noise level is nearly up
to the quietest 7200 RPM drives. It does not fare well in a comparison with
similar capacity quiet 3.5" drives from the WD Caviar Green or Seagate
Barracuda LP lines, and it certainly doesn’t hold a candle to Samsung’s own
single-platter 500GB F2 EcoGreen. Its vibration levels are decent but again
not exceptional. Power consumption is low, however, better than most others
in its class. Overall it is a good, but not the best, choice for a quiet 2TB
drive. Pricing might be a tad higher than some of the other low power 2TB models,
but the market varies enough that it’s hard to be definitive about this.

So among the low noise, highest capacity HDDs SPCR has reviewed,
the WD Caviar Green 2TB still holds the crown. Our F3 EcoGreen 2TB sample is
just high enough in noise (compared to earlier, lower capacity versions of the
EG series) to suspect the possibility of a slightly errant sample, but we’ll
never know unless we can get our hands on at least several more samples, ideally
from from different production runs. Samsung’s new F4EG 3-platter 2TB drive
should have a better chance at the crown. Hopefully, we will find out soon.

This review was made possible by the generous contributions
of forum members klankymen, frenchie, sea2stars, and
BillyBuerger in the SPCR
Donate for Review program. Much thanks for their kind support.

Discuss this article in the
SPCR Forums