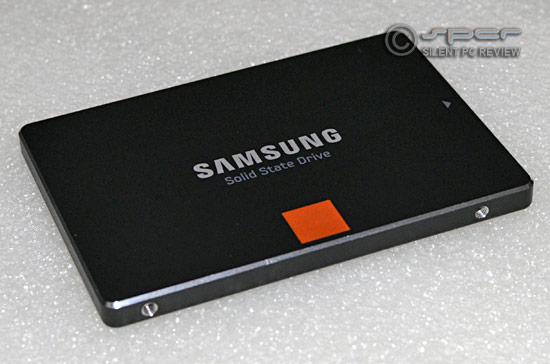 Last month we received a review package from AMD, a fully assembled system to show off the capabilities of their new APU microarchitecture, codename Kaveri, which we’re still in the process of testing. The components included are as follows:

The Samsung 840 Pro, in particularly, piqued our interest. Samsung isn’t known for their generosity with SSD review samples, and the Samsung 830 128GB we managed to get a hold of a year and a half ago turned out to be the best performing 2.5 inch SSD we’ve ever tested. Before its release, Samsung wasn’t considered a big player in the consumer SSD market, but the 830 turned things around for them and now they are one of the most sought-after manufacturers by DIYers and enthusiasts. The 840 series is a follow-up to the 830, and the Pro is its top-of-the-line specimen.

One of the keys to the 830’s success was its 3-core MCX controller that was designed in-house by Samsung rather than the more popular SandForce controllers used by many of their competitors to this day. The 840 Pro uses an updated version dubbed MDX that now supports hardware 256-bit AES encryption. The drive is also equipped with twice as much DDR2 SDRAM acting as cache, and its high performance Toggle-mode NAND flash memory is manufactured using a more advanced 21 nm fabrication process. According to the specifications, it’s capable of sequential read and write speeds well above 500 MB/s, and its claimed random performance numbers are also formidable. Furthermore, it’s backed by a five year limited warranty which isn’t groundbreaking but is on the high side for a consumer model. In addition to the 256GB model, there are 128GB and 512GB variants as well.

Like the 830, the 840 Pro has a sleek black metal enclosure with little decoration. The most important aspect of its physical size is its 7 mm height which is less than standard for the 2.5 inch form factor. As notebooks have gotten slimmer over the past few years, many manufacturers have switched to shorter SATA drives to match their machines’ thinner profiles. 2.5 inch SSDs typically have a 9.5 mm thick case by convention, limiting their compatibility in this regard. Today, ultrabooks are increasingly utilizing the mSATA standard so this is less of an issue.

Our samples were tested according to our standard
hard drive testing methodology. As of mid-2008, we have been conducting
most acoustics tests in our
own 10~11 dBA anechoic chamber, which results in more accurate, lower SPL
readings than before, especially with sub-20 dBA@1m devices.

As of late-2011, we have been conducting performance testing. A combination of timed real-world tests is used to represent a workload of common activities for a boot drive including loading games, running disk-intensive applications, copying files, and installing programs. Synthetic tests are also run to better judge the performance across the entire span of the drive.

We start off with synthetic results from the popular HD Tune and CrystalDiskMark utilities. They don’t tell the whole story of course, but it’s a quick and dirty way of gauging relative performance between drives, and of course, it’s easily reproducible by our readers at home.

The 840 Pro dominated the field in HD Tune’s transfer rate benchmark, eclipsing the Hyper X 3K 240GB‘s read speed by a hair, and beating all comers in write speed by a substantial margin. Access times were also well ahead of the others. Its sequential performance appears to be top-notch.

Real World PerformanceThe random read/write results from CrystalDiskMark are more representative of the day-to-day workload of an operating system rather than processing large chunks of sequential data (file transfers). With large 512K blocks, the Samsung 840 Pro again led the pack, beating our previous old leader, the Samsung 830. The smaller 4K block size saw it come down to earth somewhat but it was still competitive and stayed within the top three.

Our real world performance testing begins with a Windows 7 image, loaded with our test suite, being cloned to a 50GB partition
at the beginning of each drive. The suite is run start to finish three times with a defragmentation (except for SSDs and hybrid drives) and reboot
between runs.
Average times were collected for comparison.

If the Samsung 830 128GB, the current champ of our real-world test suite solid-state drive, had one deficiency it was in loading time. The 840 Pro improves on the 830’s result with gusto, placing third thanks to a particularly excellent performance in Call of Duty 5.

The 840 Pro came out on top in our applications test, tying the HyperX 3K 240GB in the ExactFile test and edging out it along with two of the other leaders in TrueCrypt.

The 840 Pro’s file copy performance was staggering. Working with small files, it doubled the speed of some of the SSDs compared, including the 830. Large file copying was also impressive, finishing ahead of the 830 by five seconds (a 22% bump).

Our installation tests were the only area where the 840 Pro faltered, trailing the the Samsung 830, HyperX 3K 240GB, and Force GS 240GB by more than five seconds when installing PowerDVD.

To represent the overall performance of the drives, we gave each model a proportional score in each real world benchmark series (loading, application, file copying, and installation), with each benchmark set equally weighted. A perfectly average drive would be awarded 25 points in each category for a total of 100 points.

Despite the setback at the end, the 840 Pro 256GB easily landed in first place with a score of 117.4. The victory was so complete that it skewed our scale such that only two other drives scored above average (100). Overall, it was approximately 14% faster than the Samsung 830 128GB, our previous 2.5 inch SSD champ, and had a 17~21% advantage versus the various SandForce drives compared.

When we reviewed the Samsung 830 128GB, we were not only impressed by its performance, but by its low power draw. It used about half as much energy when seeking than its SandForce-based rivals and had a strong advantage when idle as well. The 840 Pro delivers much of the same energy efficiency plus a further minor reduction in idle consumption.

As solid state drives have no spinning platters or moving parts of any kind, they are effectively silent storage devices. It is possible that there could be a tiny bit of electronic noise (typically a high pitched squeal) being emitted, either intermittently depending on task, or continuously, but the Samsung 840 Pro did not make so much as a peep as far as we could tell.

The Samsung 840 Pro 256GB is a premium quality solid-state drive that hits the mark in every area. The drive’s performance is top-notch, finishing first in many of our tests, both real world and synthetic, amidst a tough field of high performing competitors from Kingston, Corsair, and Intel. It’s also stingy with power, using just about 1W during seek and less than a third of that when idle. To top it all off, it supports AES-256 encryption in hardware, its 7 mm height makes it more compatible with ultrabooks, and it’s backed by a five year warranty. It’s a fast and efficient SSD that’s suitable for almost any situation — there’s simply nothing to complain about the drive itself.

The only sore-spot is the 840 Pro’s price-tag, about US$210. A year ago, it would’ve been a steal at that price, but today’s market is more competitive with many 240~256GB SandForce-based solutions like the Kingston HyperX 3K, available in the US$150 range. The 840 Pro does offer stronger overall performance, in the area of 20%, but considering how fast the competitors we’ve discussing are to begin with, its tough to notice even that much a difference under normal conditions.

Given the already high cost:capacity ratio of solid-state compared to magnetic storage, we can certainly understand choosing a more affordable option. Samsung does have a more competitively priced offering in the 840 Evo 250GB, which sports the same triple-processor controller as the 840 Pro, but it is hampered by its use of TLC (triple-level-cell) rather than MLC (multi-level-cell) memory chips. TLC chips cannot survive as many write cycles, making the Evo less durable long-term, and it also effects write speeds negatively as well.

Many thanks to AMD for the Samsung 840 Pro 256GB solid-state drive, along with the rest of the A8-7600 review system.