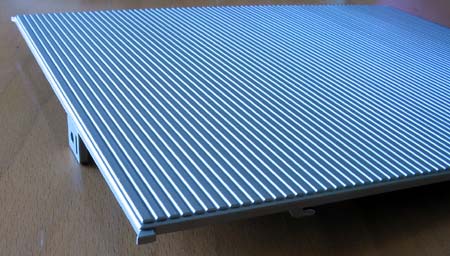 The Samsung EcoGreen F4 2TB emphasizes low noise and energy efficiency, while the Seagate Barracuda XT 2TB is all about performance, with 64MB cache and new SATA 6Gbps interface. We examine the noise, vibration, energy efficiency, and performance of these two equally large, but very different drives.

The F4 is the newest edition to Samsung’s environmentally-friendly EcoGreen
desktop hard drive line. Like Western Digital’s popular Caviar Green series,
the EcoGreens employ a rotational speed of only 5400 RPM and large platters
to cut down on cost, noise, vibration, and power consumption. The 2TB F4 has
three massive 667GB disks inside which we hope will give it an acoustic advantage
over its four-platter predecessor. The EcoGreen
F3 was a big disappointment in this regard, with noise levels much higher
than expected.

The Seagate Barracuda XT on the other hand places an emphasis on performance.
An improvement in acoustics and energy efficiency would be welcome over the
previous generation, but these aren’t its main selling points. On paper, the
XT seems suspiciously similar to its ancestor, the Barracuda 7200.12. Both have
500GB platters and the exact same specified average seek time and latency. We
suspect nothing has really changed except for the cache doubling from 32MB to
64MB and the incorporation of the new SATA 6Gbps interface. The latter makes
for great marketing but keep in mind that many mechanical drives cannot even
saturate the 1.5Gbps bus of first generation SATA controllers — for a HDD,
this is window dressing more than anything.

There is also a huge price disparity between the two drives. The 2TB EcoGreen
F4 retails for about the same as the 2TB
Caviar Green, as low as US$100, the best capacity-to-price ratio on
the market. The 2TB Barracuda XT is twice as expensive at US$200, $30 more than
WD’s fastest consumer 2TB model, the Caviar Black. For that kind of money, it
better deliver a very high level of performance indeed.

Our samples were tested according to our standard
hard drive testing methodology. As of mid-2008, we have been conducting
most acoustics tests in our
own 10~11 dBA anechoic chamber, which results in more accurate, lower SPL
readings than before, especially with <20 dBA@1m SPL. Our methodology focuses
specifically on noise, and great effort is taken to ensure it is comprehensively
measured and described. Performance is covered only lightly, for reasons discussed
in detail in the methodology article.

Ambient conditions at time of testing were 10.5 dBA and 22°C.

Our entire test suite was run start to finish three times on each drive with
a reboot and defragmentation in between runs for each drive except for SSDs
and the Momentus XT (defragmentation resets optimizations made to the XT’s flash
memory). The best times were collected for comparison.

Load time was very low for the Barracuda XT, beaten only by the Kingston SSDNow,
and the Momentus XT, Seagate’s Hybrid laptop drive. Total loading time for all
three tests was shaved by a few seconds compared to the 1TB Barracuda 7200.11.
The EcoGreen F4 came in second last. It was slightly behind its predecessor,
the F3, and the WD Scorpio Blue in total load time, a slightly disappointing
result.

Application performance was even more impressive for the Barracuda XT, taking
the crown in anti-virus scanning using NOD32, and coming in second behind the
SSDNow in ExactFile. Both drives performed extremely well in TrueCrypt, but
the F4’s total time for all three application tests was five seconds slower
than the F3.

When copying files to itself, both drives are pretty fast, particularly with
large files.

Timed installs of PowerDVD and 3DMark06 favored the SSDNow and Barracuda 7200.11.
Both the Barracuda XT and EcoGreen F4 hold their own here, marginally faster
than the rest of the field.

The previous EcoGreen model, the F3, generated 15~16 dBA when idle and 18~19
dBA in our anechoic chamber at one meter’s distance. Its overall noise level
was disappointingly closer to that of a 7200 RPM drive. The F4 seems to have
rectified the problem, whether due to an improved casing or simply the reduction
in platters, the end result places it in good company.

Our F4 sample was very quiet, emitting only 13 dBA when idle and up to 15 dBA
when seeking measured from one meter away. This is about on par with recent
drives from Western Digital’s Caviar Green series. The acoustics were very smooth
when idle and seek activity was barely audible in the form of soft thumping.
We have usually tested Samsung drives with AAM enabled as well, but that feature
is now apparently locked.

The shedding of the fourth platter did little to alter the level of vibration
produced by newest EcoGreen, but it did give it a distinct power advantage.
We’re pleased to report it has the lowest power consumption of any high capacity
(1TB or greater) drive we’ve tested. In idle it consumes only 4.0 W, the same
amount as the WD Green 2TB with its heads unloaded. The F4 seems to be the just
the ticket for users who want quiet, high efficiency drives but are paranoid
about the frequent head-parking endemic to the Caviar Greens.

Being a high performance 7200 RPM drive, the Barracuda XT is much louder all
around. Our drives (we received two from Seagate) had similar acoustics, measuring
17 dBA when idle and 18~19 dBA when seeking at one meter’s distance, more or
less comparable to the old 7200.11 series. However neither sample produced any
whine or significant tonality, just a clearly audible but soft benign hissing
when idle. It was much worse during seek activity when they emitted sharp, pronounced
clicking noises.

While the XT isn’t any quieter than previous models 7200 RPM Barracudas, the
level of vibration has been cut down a great deal. One of the samples scored
a 7 on our subjective vibration scale, while the other scored an impressive
8. For comparison, we recently received shipment of six WD Caviar Green drives
with similar results — half of them were 7 while the other half were 8.

Power consumption has also been dialed down, 7W when idle and about 8W during
seek, very low for a 7200 RPM four-platter drive.

The recordings start with 5 to 10 seconds of ambient noise, then 10 second
segments of the drive in the following states: idle, seek with AAM enabled (if
applicable), and seek with AAM disabled.

The newest EcoGreen is a huge improvement noise-wise over the
disappointing F3. Measuring only 13 dBA and 15 dBA at one meter when idle and
seeking, respectively, the acoustics of the 2TB F4 at last brings EcoGreen parity
with Caviar Green. When it comes to power consumption, the 2TB F4 is actually
superior to the 2TB Green, using almost 1W less when seeking, and it idles using
the same amount of energy as the WD with its heads parked. (It should be noted
however that the 2TB WD Green we are comparing it to is an older 4-platter model.
Newer WD GP revisions have been shipping recently with three 667GB platters,
which probably brings power down. We’ll be checking on this soon.)

From a performance standpoint, like most "green" models,
the F4 is relatively slow compared to 7200 RPM drives. Boot and loading times
are a step behind, and when copying small files it can only beat 2.5" variants.
Copying large files is the one area in which it excels, its one saving grace.
We wouldn’t employ it as a boot drive to hold an operating system and applications
for daily use, but it is almost perfect for media storage. Retailing for between
US$100 and US$110, it is also extremely affordable.

The latest member of the iconic Seagate Barracuda family is not
a very quiet drive, but its acoustic character is adequate in quality. It will
be clearly audible in most systems, but it sounds quite soft and isn’t irritating
except when seeking. Its overall noise level is about the same as the Barracuda
7200.11/7200.12, but Seagate did make huge strives in bringing down the level
of vibration. In this regard, it is comparable to 5400 RPM models from Samsung
and WD — this can make a huge difference in real world acoustics, especially
in cases with mechanically poor drive cages and/or if multiple drives are present.
Power consumption has also been reduced significantly.

Of course the main advantage of a 7200 RPM drive is speed, and
the XT definitely has that. It performed very well in our test suite, beaten
only by a SSD in application and file copy performance, and coming in third
behind a SSD and Seagate’s hybrid Momentus
XT in boot and loading times. However, it wasn’t that much faster than
a 1TB Barracuda 7200.11, so its US$200 price-tag seems inflated, perhaps
due to its SATA 6Gbps controller. Unless you require high capacity for applications
and games, you would probably be better off with a budget SSD coupled with a
large 5400 RPM HDD; such a combination can be purchased for a comparable amount.

Many thanks to Seagate
and Samsung respectively for the
EcoGreen F4 2TB and Barracuda XT 2TB samples.