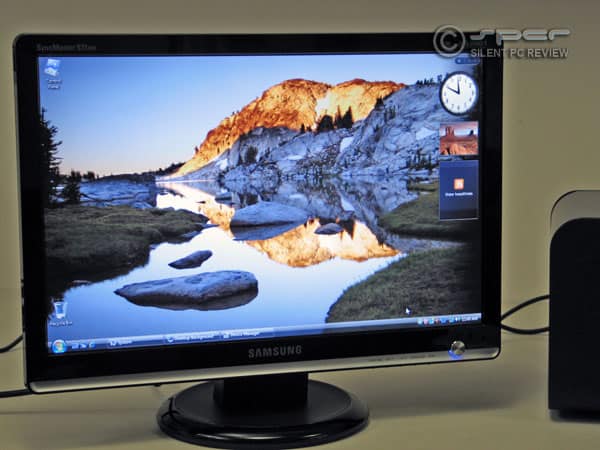 The Samsung SyncMaster 931BW is a modestly priced wide screen 1440×900 LCD monitor with both Analog RGB (VGA) and DVI inputs and a claimed response time of 2ms. This review is a kind of spot check on what most SPCR readers assume to be facts: That modern LCD monitors have very good performance, great fit and look on the desktop (and elsewhere), make no significant noise, draw little power and produce little heat. Is this true of the 931BW?

Since the introduction of LCD flat panel monitors some years ago, their relatively low power consumption, heat, and low noise has become so normal that these aspects hardly seem worthy of comment any more. It’s a far from the days when CRTs dominated. The high pitched whining and buzzing from the coils and electronics in the CRT was a source of considerable annoyance for many, and their high power consumption was little different from similarly sized TVs. Compared to then, these are the good old days, when it comes to monitors. Consider this review, then, as a kind of spot check on what most SPCR readers assume to be facts: That modern LCD monitors have very good performance, great fit and look on the desktop (and elsewhere), make no significant noise, draw little power and produce little heat.

The Samsung SyncMaster 931BW is a modestly priced wide screen LCD monitor with both Analog RGB (VGA) and DVI inputs. Its screen aspect ratio is considerably wider than the typical 5:4 or 4:3 ratio LCD screen inherited from the CRTs. The native resolution of 1440×900 tells us that its aspect ratio is 16:10. With most video cards, this setting (1440×900) will be the only one with which you can achieve the correct aspect ratio. Like all LCD monitors, it looks at its best at its "native" resolution, which is naturally 1440×900.

The unit’s cosmetics are stylish, though how unique that style can be when all you have to work with is a stand and a bit of bezel surrounding the flat screen is open to debate. Still, the black bezel frame with the counterpoint of the silver strip along the bottom and the silver blue backlight power button is a combination that’s easy on the eye. 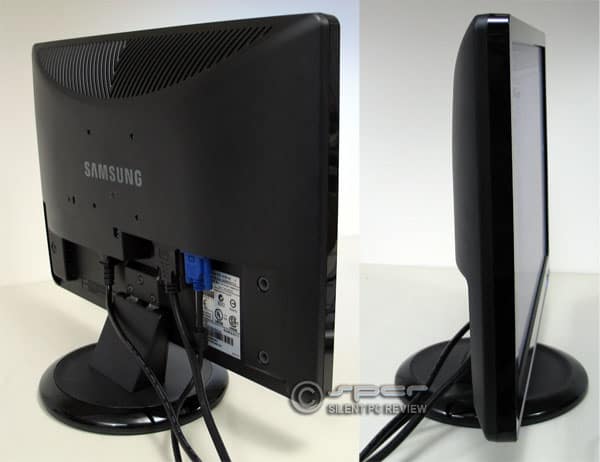 Slim, but not that slim.

The top of the curved back panel is striped by many slotted vents that allow heat to escape from the monitor. The design does not allow any electronics to be seen directly through the slots; this suggests that dust does not have a direct path to settle inside.

One design choice that’s not particularly user friendly is that the stand only allows for tilt angle adjustment, not height. Ergonomic recommendations for computer seating include setting the height of the monitor relative to the user’s eyes. For shorter people, the vertical position of the 931BW might be OK, but most others might have to resort to books and other makeshift boosters to increase the height. The absence of built-in rotation adjustment is no big deal; it’s easy enough to turn it along with the stand. 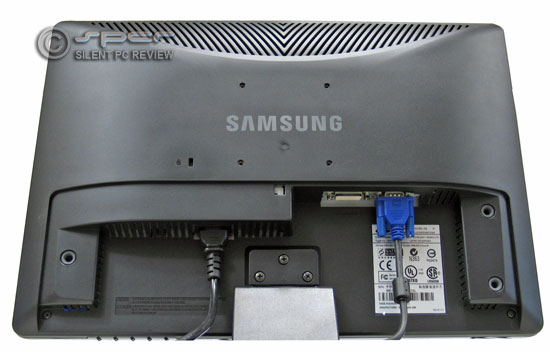 The back has jacks for the DVI and Analog RGB inputs and standard detachable AC plug.

The AC power plug tells us immediately that the power supply is built into the back of the 831BW, unlike some other LCD monitors that utilize an external AC/DC adapter. Generally, one less item in the cable clutter around the computer is a good thing. 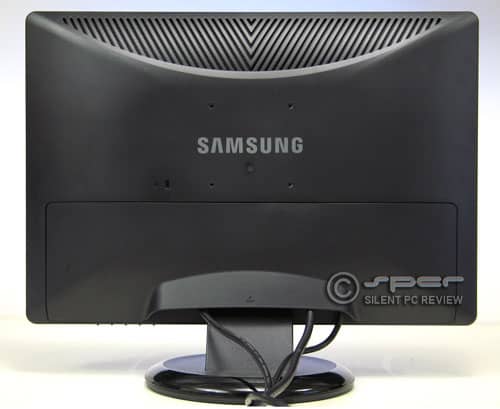 A clip-on cover presents a smooth face that’s probably preferable if the back is visible.

An AC power cord, CD with monitor driver and user guide, warranty card, and a quick setup guide are supposed to be in the package, and they were duly found. Though not specifically itemized, an analog VGA signal cable and a nice soft microfiber cleaning cloth were also included. These are nice touches.

The OSD button controls are positioned on the right side of the bottom-facing edge of the bezel, next to the round power button. Navigation through the on-screen monitor menu is a bit awkward as is the norm.

Much is made in the features highlights of Magic Color, MagicTune, and MagicBright 3. MagicTune is a Windows software utility that more or less duplicates the OSD controls. It is much more convenient to use than the OSD controls. MagicBright is a feature in Magic Color that provides seven different preset brightness settings: Custom, Text, Internet, Game, Sport, Movie, and Dynamic Contrast. This utility is available on the supplied driver CD which also contains the manual and driver (needed for the 1440×900 setting). 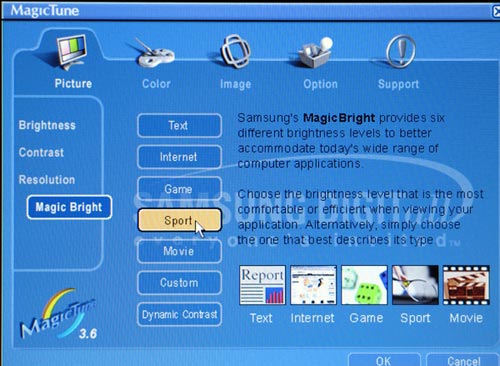 Much easier to navigate through MagicTune than the OSD menu.

Our usual gamut of test equipment was bright to bear on this monitor. The photo below shows the gear clustered around the power supply tester, which is obviously not used here. Most of the other components was used.

The test results are shown below:

1. NOISE – The Samsung SyncMaster 931BW makes no audible noise. A faint hum can be heard from the back of the monitor with my ear about 3" away. Move back to one foot, and it becomes much fainter and harder to hear. From two feet, I cannot hear it at all in this very quiet, ~20 dBA ambient room. It certainly cannot be measured or recorded from our standard one meter distance. Any other moving device or ambient noise in your room will easily drown out this noise long before you can hear it. It is effectively silent.

2. POWER – The maximum power draw is given as 42W, but in testing, this consumption level was never reached. The maximum AC power ever reached in any combination of monitor settings and applications was 31W. The power consumption was directly tied to brightness. Switching through the Magic Bright presets, which changes mostly brightness and contrast, made this very clear.

What’s a bit surprising is that judging from the big gap between apparent power and VA, and by the PF measurements, this monitor’s power supply does not feature any kind of power factor correction. (The link goes to an explanatory PDF file from the U.S. Department of Energy.) APFC is so common these days that on the manufacturing side, the additional cost is probably no more than a dollar or two for a product like this. It would have made the 931BW more environmentally friendly by eliminating AC power losses due to harmonics.

3. PERFORMANCE – The monitor was tested subjectively for visual performance with text, images, video clips and a couple of games. Several different video cards were used:

The overall performance was excellent. The edge to edge brightness was very uniform. The usable viewing angles were quite wide. At the 1440×900 setting, both text and images were sharp and clear without any artifacts of any kind (except that introduced by the analog video cable and the onboard integrated graphics, which have nothing to do with the monitor itself). Even fast motion was well reproduced with no significant ghosting or trailers; perhaps it’s the effect of the 2ms response time. While a formal color accuracy test was not performed, images such as photos and videos I’d taken myself were reproduced with great vibrancy and they were certainly accurate enough for non-professional use.

The Samsung SyncMaster 931BW is a good LCD monitor with fine performance, no noise, low power consumption and little heat. It’s sleek, lightweight and nice to view. It confirms our basic assumptions about LCD monitors in general: They’re basically noiseless, cool, and pretty nice to use. The only downsides are the absence of height adjustment and active power factor correction. Given the very modest <$250 market price in the US and Canada, it’s difficult not to recommend the 931BW for any range of applications and users. I’d certainly have no problem using this monitor (or perhaps a pair of them) on my desktop.

Our thanks to Samsung Canada for the review sample and for their kind support.