The Scythe Grand Kama Cross is a down-blowing CPU cooler featuring a large 140mm SlipStream fan, 4 copper heatpipes twisted to form a “X” formation, and an relatively small stack of aluminum fins. Does it have what it takes to compete with the big tower heatsinks?

As computer microprocessors continue to ramp up in speed and power consumption,
modern motherboard components that deal with power management are subject to
an ever increasing amount of stress. Current high-end motherboards ship with
high quality components and heatsinks for the voltage regulators as manufacturers
expect enthusiasts to dish out even more stress through overclocking. It is
ironic that these same users typically use large side-blowing tower CPU heatsinks,
reducing the helpful top-down airflow most stock cooler units provide over the
components surrounding the CPU socket.

For those concerned about this issue, down-blowing heatsinks are better, though
they generally do not cool the processor as effectively, partly because they
do not blow exhaust out toward the back of the system. An ideal top-down cooler
would provide improved socket cooling without sacrificing much in the way of
CPU cooling proficiency.

Enter the Scythe Grand Kama Cross, a larger version of the Kama Cross, a modestly
sized cooler with only 3 copper heatpipes and a 100 mm fan. The Grand version
is much larger, featuring four heatpipes with airflow provided by a 140 mm Slip
Stream fan. It is unusual looking with the heatpipes curving inward so that
the ends cross each other in a “X” formation. The aluminum fins around
the heatpipes are tightly spaced, angled to direct airflow around the socket,
and surprisingly short, particularly at the ends. The total area of the fins
is lower than usual for a heatsink of this size.

While Scythe has introduced hard mounting systems for some of their heatsinks,
the Grand Kama Cross, despite weighing 750 grams, ships with S478, AMD, and
LGA775/1156/1366 mounting frames that utilize stock mounting mechanisms. On
the Intel side, not only do you have to deal with push-pins, but for LGA1156,
the pins have to be slid halfway between the LGA775 and 1366 positions. There
is nothing to lock the push-pin in place, which can result in a mounting that
is off-center. The only good thing about these frames is they can be rotated,
which is useful for the Grand Kama Cross since one side is much wider than the
other. If the heatpipe ends are arrayed vertically, it could interfere with
the power supply in many ATX tower cases. 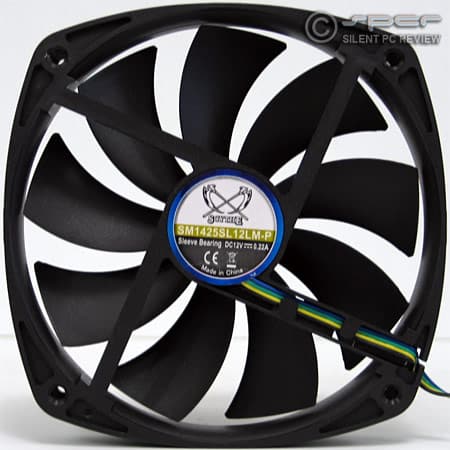 The 140 mm PWM Slip Stream is a 9-blade fan with a curved, but not quite round

The stock fan was previously tested when we reviewed the Prolimatech
Armageddon, and the noise level was very similar with the exception
of a 2 dBA increase at 12V which may have been caused by the metal frame to
which the fan is mounted. Thankfully, this is not a serious issue since we consider
both 26 dBA and 28 dBA too loud for serious consideration in a quiet PC.

The fan exhibits some minor bearing chatter, and is a little whiny at full
speed, but other than that, its acoustics are excellent throughout its range
like other members of the Slip Stream family. The fan is really only too loud
at 12V. At 10V, the measured noise level is high at 21 dBA, but all you really
hear is turbulence. It undervolts well, becoming inaudible at around 7V.

The Grand Kama Cross performed admirably considering that it is a top-down
cooler. With the stock fan at fairly quiet 17 and 14 dBA levels, the thermal
rise above ambient was only 41°C and 44°C, respectively. At 11-12 dBA
the fan becomes almost inaudible, and the temperature increased by an additional
5°C. This would put the in-case temperature of the CPU at ~80°C or higher,
which is probably too high for most users’ comfort… but it may be a perfect
acceptable setting if you know you will rarely push the CPU as hard was we do
in our testing (100% load on all cores for >20 minutes continuously.)

Our Nexus 120 mm reference fan is apparently too small to be as effective as
the stock 140mm fan, allowing the CPU to get 4°C hotter at 12V/16 dBA than
the stock fan at 9V/17 dBA. As the reference fan’s speed was slowed, the difference
became more apparent. With both fans at 7V, the stock fan was slightly quieter
and a very significant 8°C cooler. It’s clear that the large stock fan is
essential to the Grand Kama Cross’ success.

The large, efficient stock fan of the Grand Kama Cross propels it past the
Noctua NH-C12P as
our best top-down cooler, and challenges some of the better tower heatsinks.
When paired with our reference 120 mm fan, it drops far down in the chart, but
still dishes out a severe beat-down to the Scythe
Kabuto.

It may not be as effective when it comes to cooling the components around
the socket though, as the height of the heatsink without the fan is 112 mm,
compared to 91 mm for the Noctua NH-C12P. The Noctua’s fan, though smaller,
is closer to the PCB by almost an inch, and the closer proximity may have an
impact on cooling effectiveness of the motherboard components.

The recordings are intended to give you an idea of how the product sounds in
actual use — one meter is a reasonable typical distance between a computer
or computer component and your ear. The recording contains stretches of ambient
noise that you can use to judge the relative loudness of the subject. Be aware
that very quiet subjects may not be audible — if we couldn’t hear it from
one meter, chances are we couldn’t record it either!

We were skeptical at first about how well the Scythe Grand Kama Cross would
perform due to its relatively modest surface area and tightly spaced fins—
this combination typically spells lower performance for quiet CPU cooling. These
fears proved to be unfounded as the GKC performed very well on our testbed,
even rivalling some very successful tower coolers. The included 140 mm Slip
Stream fan is probably the best stock fan that ships with any heatsink, both
in terms of performance and acoustics. Our only criticism is the traditional
mounting methods used for this big heatsink. A metal backplate with bolts is
strongly recommended for a cooler of its size and weight. We wish Scythe would
retool the mounting systems for all its big coolers.

The Grand Kama Cross delivered the best CPU cooling for a down-blowing heatsink
on our LGA1366 test bed to date, but the Noctua
NH-C12P may be the better top-down cooler overall. Though more expensive
and equipped with an inferior fan, the Noctua heatsink mounting system is immeasurably
better and its shorter stature puts its fan closer to the socket and surrounding
components by almost an inch. Of course, the Noctua is also most costly. If
you care only about CPU temperature, the Grand Kama Cross is the better choice
of the two, but budget tower coolers like the Cogage
TRUE Spirit or Cooler Master
Hyper 212 Plus are also viable alternatives.

Our thanks to Scythe
Co., Ltd. and for the Grand Kama Cross heatsink sample.