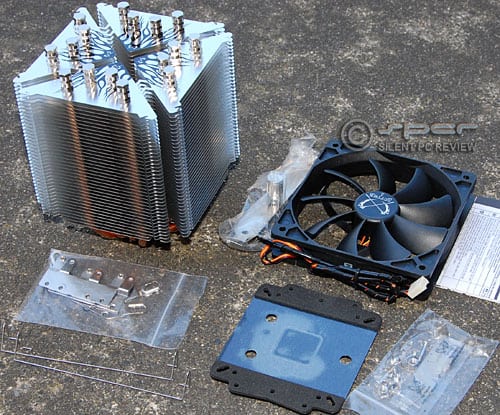 A pair of Scythe heatsinks battle for a place amongst the best CPU coolers. The Ninja 3 seeks to bring prestige back to its family, while the sharp Scythe Yasya attempts to cut up the competition.

Revered for its part it in creating and popularizing the tower heatsink paradigm,
the Japanese manufacturer Scythe has been neglecting the form recently. Scythe’s
last big tower cooler, the Mugen-2,
impressed us greatly with its high performance and low price-tag, but it’s been
more than a year since its debut and nothing has since has been released to
compliment it. There seems to be a large void in Scythe’s lineup since the Ninja
series fell out of fashion, having been surpassed by a multitude of ambitious
newcomers. The release of two new tower heatsinks may remedy the situation,
but with the DIY market currently saturated with high performance PC coolers,
the Ninja 3 and Yasya really need to step up to be noticed.

The newest scion of the legendary Ninja family retains a distinct resemblance
to the original; it is a big, uniform, symmetrical, block of aluminum fins.
Ninja 3 features an extra heatpipe on each side and two channels slicing up
the heatsink in the shape of an ‘X’ though small portions have been left intact
as bridges holding the four sections together. Its predecessor the Ninja
2 relied on stock mounting systems, but the Ninja 3 utilizes a bolt-thru
system with a padded backplate.

Scythe heatsink stock fans have been consistently above par acoustically, and
tend to deliver good cooling in relation to the noise . However, to satisfy
more performance-oriented and less noise-conscious users, the Ninja 3 ships
with a relatively high speed Slip Stream PWM fan rated for 1900 RPM. On the
bright side, there’s a manual fan speed controller attached.

We’re not even going to wager a guess at the origins of the name “Yasya”
but with no lineage to live up to the heatsink bearing its name is free to be
equally odd. In essence it is a traditional six heatpipe cooler but uses what
Scythe refers to as a “Trident Multi Layer Fin” structure. The faces
of the heatsink are very angular, with each fin resembling a jagged blade. This
unusual design reduces resistance but at the cost of total surface area. The
result is a menacing heatsink, not just in appearance. The Yasya is the most
physically hazardous CPU cooler we’ve come across since the Thermaltake
SpinQ and caution should be exercised when handling it.

Compared to the Ninja 3 the Yasya is lighter and more slender. Though it’s
not exactly a lightweight, Scythe deemed it appropriate for traditional Intel
pushpins and AMD spring-loaded tension clips. The stock fan is the same as the
Ninja 3’s.

The Ninja 3 is composed of 8 copper heatpipes (for 16 heatpipe
paths through the fins) and a stack of 38 aluminum fins. According to our measurements,
it weighs 880 grams, 1010 grams with the stock fan and clips installed, and
has a height of 159 mm. For reference, the Thermalright
Ultra-120 eXtreme is 162 mm tall.

The Yasya is composed of 6 copper heatpipes (for 12 heatpipe paths
through the fins) and a stack of 54 aluminum fins. According to our measurements,
it weighs 760 grams, 890 grams with the stock fan and clips installed, and has
a height of 158 mm. For reference, the Thermalright
Ultra-120 eXtreme is 162 mm tall.

A flat contact area between the heatsink and CPU heatspreader
is ideal for heat transfer. The copper heatspreader that covers a modern desktop
CPU die often has a slightly concave shape; that is, the center is slightly
lower and the surface gradually curves upwards toward the edges. Heatsink manufacturers
can either make their bases flat, slightly convex to match the concave surface
of the processor.

A Czech tech website, CTTL.cz
found that their Ninja 3 sample had a rather poor base. We replicated their
observations by placing a visibly straight metal ruler against the base of the
Ninja 3 and several other heatsinks with a bright light source in the background
to see how much light leaked through.

On the Ninja 3, light was visible along the entire surface except at the far
edges. The base is concave with a shallow but noticeable crater effect. Most
coolers have bases that are almost flat or contoured slightly in the opposite
direction. When the ruler was placed on the Yasya’s base, more light was visible
at the edges, and the ruler could rock up and down slightly with the center
as a pivot point.

The Ninja 3 and Yasya stock fan has a much higher speed than the fans on most
of Scythe’s previous coolers but it is still a Slip Stream, so smooth, unobtrusive
sound can be obtained through undervolting. At 9V and above, the fan produces
a distressing amount of whine and turbulence. At 7V the whine lessens, but the
turbulence remains, and the fan gives off an audible hum. At 5V, the fan becomes
what we consider to be quiet — 18 dBA@1m, with a smooth broadband profile
with just a slight rattle audible at one meter. At 4V, its acoustics are beyond
reproach; there are few fans if any that sound as good generating 13 dBA@1m.

The fan has a starting voltage of 4V, which is also the bottom limit of the
included fan controller. However, when combined with PWM control on a capable
motherboard, the speed can be dropped down to about 400 RPM, though there is
little practical reason to slow it down that much.

When paired either the stock fan and our reference fan, the Yasya consistently
held a 2~4°C lead over the larger Ninja 3. Though the Yasya has a less impressive
mounting system, we found that the thermal compound footprint (examined when
the heatsink was removed after testing) showed signs of a tighter mating, and
was more even all around, probably due to its slightly convex base. We believe
this played a significant factor in the Yasya’s superior performance.

Pairing the heatsinks with dual reference fans produced similar improvements
with a 2~3°C drop in temperature at 12V and a 3~4°C dip at 9V and 7V.

The Yasya, despite its smaller stature and lower weight, cracks our top ten
list, performing on par with the Thermalright
Ultra-120 eXtreme. The Ninja 3 lands about 5 spots behind sharing company
with the likes of the Titan Fenrir
and Zalman CNPS10X Extreme,
two imposing heatsinks that also perform a bit below expectations.

While the Ninja 3’s base is polished to an almost mirror-smooth finish, Scythe
should focus more on its flatness rather than the visible shine. Its concave
shape is likely the main cause of its lackluster cooling. Though not a poor
heatsink, the Ninja 3 underperforms for its size/weight. It is possible that
our review sample is an anomaly; if so, perhaps Sythe will see fit to send us
another sample.

Not only is it a behemoth, it’s a pain to install as well because bolting down
the heatsink requires the motherboard to be out of the case, and flipped upside
down. It’s something that should’ve been addressed after the Mugen-2;
Scythe still has a ways to go in this regard. It is a secure mounting system,
though, and like all previous Ninjas, the latest incarnation is a symmetrical
square so there are no orientation issues on AMD motherboards.

The stock Slip Stream fan has a higher maximum speed than we would have liked,
but the included controller can bring it down to near inaudible levels and below
if connected to a PWM controllable fan header. The current street price for
the Ninja 3 is US$45, a little high considering there are a slew of better performing
alternatives.

The Yasya, despite its smaller size, managed to outperform the Ninja 3 by
about 3°C consistently in our tests. Another 3°C and it would’ve challenged
for champion status. Unfortunately it uses the stock mounting mechanism which
isn’t ideal because of the Yasya’s weight. In addition, the fan points upward
when installed on AMD motherboards; given its performance it really deserves
something better.

The Yasya ships with the same stock fan and controller as the Ninja 3, so the
acoustic quality and overall noise level simply isn’t an issue. The Yasya can
be found online for as low as US$35, a US$10 discount over the Ninja 3, making
it a very solid budget cooler.

Our thanks to Scythe
Co., Ltd. for the Ninja 3 and Yasya heatsink samples.