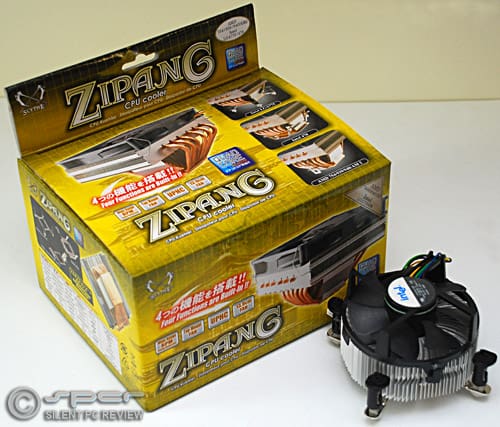 According to one web source, Zipang, “meaning land of gold or gods…”, was what the Portuguese first called the country known best to PC cooling fanatics today as the home of Scythe. Zipang, the topic of our review, is what Scythe has decided to call one of their latest big top-down CPU coolers.

Scythe, a favorite of the silent PC community, has a plethora of CPU coolers,
but only a few of their current models are of the top-down variety. Big tower designs have taken over the CPU cooling center stage in recent years.
Reviews show top-down airflow coolers to lag a bit in performance, but neglect to mention their advantage
in cooling electrical components around the CPU socket. Reference motherboard designs from Intel and AMD still assume a certain degree of cooling for the voltage regulation module (VRM) and other hot board components from a top-down airflow cooler.

The Scythe Zipang is a prime candidate for the title of today’s best top-down cooler. Compared to our
current top-down champion, the Scythe Andy Samurai Master, the Zipang has
a more straightforward design, longer heatpipes, and a bigger wingspan. It may or may not have more surface area; the Andy is a big beast, too. However. the Zipang is the
first cooler we’ve tested with a 14cm fan.

On paper the Scythe Zipang is a brute
force attempt at improving performance. However, some thought to improving key design elements is evident as well.

The Zipang’s heatpipes, for example, have a unique shape. They
are longer than most, and run through both sides of the base, with the shorter
portion curving in toward the longer section. The six heatpipes
have both ends connected to the fins, at the condensor end. The middle section of the heatpipes that run through the base is where the coolant in the pipe gets evaporated to expand and travel to both ends of the heatpipes. This design means that the six heatpipes act like 12, like in the tower heatsinks where the heatpipes are U-shaped, with the evaporator section being the portion at the bottom of the U. It should mean much greater cooling power than the simple C-shape heatpipes employed in previous top-down heatsinks.

One end of the heatpipes runs through friction-fit holes in the fins. The other end curves around and appear to be pressed tightly in grooves on the bottom edge of the fins. Whether solder is present in the grooves is difficult to tell; pressure might be enough to form a strong thermal bond.

The aluminum block sitting above the base is a common element
among Scythe’s heatsinks, most notably the Ninja line. However, this one has
slits on all four sides, exposing more surface area to open air.

The large 14 cm fan is a fairly typical for Scythe with a design similar
to their Kama line, although the struts have been correctly reversed to make them more perpendicular to the trailing edges of the fan blades. This change should
result in lower turbulence noise, especially of the tonal kind. Aside from that, it’s a typical seven blade sleeve
bearing fan — if you can call a 140 mm fan ‘typical’. Incidentally, this fan also
has 120mm mounting holes if you wish to use it elsewhere. Keep
in mind, it has closed corners, so they can’t be used with rubber fan isolators
without modification.

The spacing between each 0.23mm fin is quite tight at 1.55mm, which may suggest poor
performance with low airflow. Inexplicably, manufacturers always seem to
make the spacing very narrow on top-down coolers. It seems counter-intuitive
as the denser fin count makes it harder for airflow to reach the components
around the socket. Still, the depth of each fin is just 30mm, which is far for the airflow to pass through.

Note the asymmetry in the photo above. It appears that the heatpipes are deliberately off center. This is probably to ensure that the overhang beyond the top edge of the motherboard is kept small; otherwise, the wide span of heatsink may run foul of the power supply that’s usually the side closest to the CPU in most PC cases.

Sycthe heatsink bases are usually very well finisihed. The Zipang’s base is no exception.

Scythe employs three simple mounting frames that attach via
screws — one of their trademarks. Unfortunately, Scythe continues to
use push-pins for LGA775 mounting. We get nervous everytime we see them
on a cooler of the Zipang’s weight.

The heatsink installed without any complications. The overhang of the fins is high enough over the base to leave room to reach in and access the pins without too much trouble. Unless you have big hands, it’s not too hard. The end results was a snug, tight fit.

Load testing was accomplished using CPUBurn to stress
the processor, and the graph function in SpeedFan was used to make sure that
the load temperature was stable for at least ten minutes. The stock fan was
tested at various voltages to represent a good cross-section of its airflow
and noise performance.

The ambient conditions during testing were 15 dBA and 21°C.

Stock Sycthe 140x25mm fan – We
did a basic review of the stock fan’s properties.

The fan generated 23 dBA@1m at full speed, which is very low for
a stock fan. At lower voltages it seemed so quiet that a special effort was made to measure and record the noise when the ambient was at its lowest in the lab — slightly less than 15 dBA at five o’clock one quiet morning. In many systems, this fan would be the quietest component even at full speed. It spins at
approximately 1000 RPM at 12V down to about 500 RPM at 5V. The audio recording was scrapped for the noise at 5V; it was too close to the ambient, and extremely difficult to distinguish when the fan is turned on. So this fan recording starts at 7V. This fan is one of the quietest, nicest-sounding, stock fan SPCR has encountered in over six years of testing CPU coolers.

We were unable to determine the fan’s starting voltage. When we started the
test from 12V and decreased the voltage incrementally (turning the power
source off and on at each interval), we found it could start up at 5V. When we
started from a low voltage, and worked our way up, it would not start up reliably
until 8V. After testing it on our heatsink testbed motherboard, we found that
it will start up at 7V as long as the fan speed is never decreased to the point
where the fan stops spinning. If this happens, up to 8V is required to get it
going again. Both temperature and sample variance may come into play here.

Fan @ 12V: The fan sounded smooth and very quiet. There was some slight
chuffing evident close up, and a trace of tonality centered mostly around 900 Hz. Thermal rise was 18°C, excellent
for a top-down cooler.

Fan @ 9V: The noise dropped substantially. From very close, there was some low-pitched buzzing and clicking. Overall, it was almost inaudible in our lab. The CPU temperature rose by just 2°C.

Fan @ 7V: It sounded very smooth, with only very minute clicking. At this
point we could not hear the fan over the ambient noise, except from within about a foot distance. The 16 dBA@1m SPL could not have been measured in the lab except at ultra-quiet times… like 5AM. Performance
dropped by a further 5°C, and the °C/W ratio rose just above the 0.3 mark that’s our rough safe limit for cooling. In a real system inside a real case with a similar CPU under heavy long term load, this is probably as low a fan speed as you’d want to use.

Fan @ 5V: The fan sounded the same as at 7V — inaudible. There’s no
reason to drop the fan speed this low. Performance really suffered with an
almost 10°C jump compared to 7V. The tight fin spacing and minimal airflow don’t make a good combination.

Compared to other top-down coolers, the Zipang is right up there except at 5V, the slowest fan setting.
The lowest practical speed for all three of these heatsinks is really 7V, and at that level it’s only marginally bested by the Andy Samurai Master. At full speed, the Zipang does not quite match the Andy; it’s likely that the Andy has greater cooling surface area.

The Zipang compares well agains the Ninja Copper
tower heatsink but doesn’t quite reach the performance of the tower king Thermalright Ultra-120 eXtreme.

The recording begins with the ambient noise of the test room. Please set your playback volume so that the ambient noise is almost inaudible, then don’t adjust the volume control again. For best results, save the sound file to your own PC, then listen.

The Scythe Zipang is an excellent top-down cooler. It doesn’t quite catch the best of the biggest tower heatsinks, but it comes close. Slightly wider spacing between the fins would probably have helped to maintain better cooling as fan speed was reduced, but for most CPUs today, the Zipang’s performance with its fan at 7~9V is already good enough. The challenge of matching the best tower heatsinks now falls to the impractically large Scythe
Orochi which we will review at a later date.

The Zipang’s performance is only a tiny step behind the
Scythe Ninja Copper. Like the Ninja Copper, the Zipang ships with a great
fan that remains quiet throughout its range and exhibits excellent acoustics.
This is one of the quietest "stock" heatsink fans. In many systems, the 140mm fan at full speed will be the quietest component.
That means for casual silencers, no fan replacement, control or modding is necessary. Just install and forget! For silent PC fanatics, a slight undervolt will make it
quiet enough to be inaudible without compromising performance.

Our only beef with the Zipang is the mounting system. Scythe continues to equip
their heavier heatsinks with plastic push-pins for LGA775 mounting.
Anything over around 600g, in our opinion, should utilize a more secure installation
method, preferably with metal bolts and a backplate to support the motherboard. The Zipang’s ~$50 price is about what you’d expect to pay for this kind of performance.

Our thanks to Scythe
for the Zipang sample.