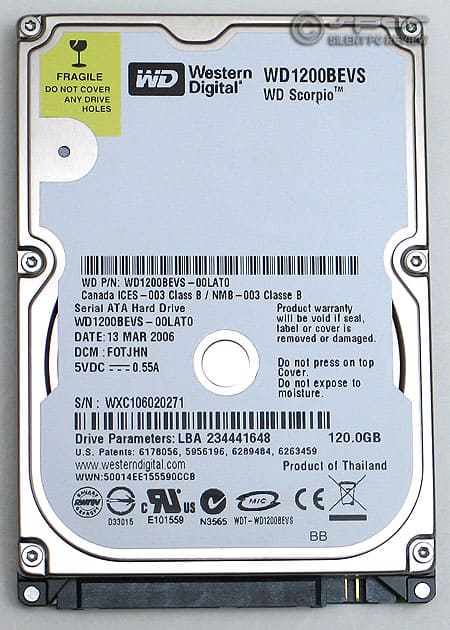 On the outside, Seagate’s 7200.11 1.5TB drive looks no different than the 1TB model. On the inside however, the platters are much more massive: 375GB vs. 250GB. Performance should be improved but will that be accompanied by extra noise?

Seagate’s Barracuda 1TB 7200.11
was a return to respectability for Seagate in the eyes of SPCR. After years
of tinkering with various revisions, the 11th iteration of their 7200 line finally
put Seagate back into contention. While not the quiestest drive, it wasn’t half-bad
— certainly not for a 1TB drive. Today we’re looking at their 1.5TB drive,
an even bigger challenge when it comes to noise. It has sat alone for several
months as the largest desktop drive, only recently having been eclipsed by Western
Digital’s 2TB Green Power model. To keep noise down and performance up, Seagate
has cranked up the platter size to a whopping 375GB.

A run-down of the published specification tables for the 1.5 TB Barracuda versus
the earlier 1 TB version shows that the newer drive is claimed to have a higher
sustained transfer rate and higher noise levels. Idle power consumption is the
same, but Seagate does not state how much energy is required during seek. The
new model also sports much larger platters — a massive 375GB per disk.
That’s about 12% more than the density necessary to produce a 3-platter 1TB
drive and 50% increase compared to Seagate’s own 1TB 7200.11 drive.

Our sample was tested according to our standard
hard drive testing methodology (though testing now takes place inside
our anechoic chamber). The test drive sample was compared against a few other
drives. Our methodology focuses specifically on HDD noise, and great effort
is taken to ensure it is comprehensively measured and described. Performance
is covered only lightly, for reasons discussed in detail in the methodology article.
For comprehensive HDD performance testing results, we recommend Storage
Review, who have established a long reputation as the specialist in
this field.

Ambient conditions at time of testing were 11 dBA and 20°C.

Acoustically, our Seagate 7200.11 1.5TB and 1TB samples were very similar.
We measured a 1 dBA@1m improvement at idle, but the drive retained the same
tonal/metallic character of the 1TB 7200.11. The overall sound was broadband,
except for the 120-130Hz fundamental tone of its motor spinning at 7200 RPM.
Seek noise was indistinguishable between the two, measuring 19 dBA — among
the best for high capacity 7200 RPM drives.

With 4 platters spinning at 7200 RPM, dampening vibrations is difficult, but
the 1.5TB 7200.11 was slightly better in this regard than the 1TB model. It
was a small subjective improvement, though not enough for us to forego recommending
soft-mounting/suspension.

Power consumption was a mixed bag. We measured 8.8W at idle, which is, by a
small margin, among the highest we’ve recorded. During seek, power consumption
reached 10.7W which is slightly less than one would expect for a drive this
many platters. We would have preferred lower idle power though — the majority
of hard drives deployed in desktop environments lay idle for most of their operational
lives.

We view the 1.5TB 7200.11 from Seagate favorably — it is
a fairly good compromise between noise and performance. Acoustically, it is
a minor improvement over their
1TB drive — slightly quieter when idle with a bit less vibration, though
this may simply be a result of sample variance. Increasing the areal density
instead of the platter count played a big part in keeping noise and vibration
in check. However, without soft-mounting, the amount of vibration is still bad
enough to dramatically affect the noise level of a quiet system. We can’t really
fault the drive for this however — most high capacity drives exhibit a
similarly high level of vibration.

Thanks to its high areal density, it is also one of the faster
7200 RPM drives out there, at least according to HD Tach. It posted a very high
average read speed, high enough to rival the Velociraptor.
It had relatively high random access times, but considering how quiet the seeks
were, this seems like a fair trade. In fact, it more than holds its own against
drives that have AAM (Automatic Acoustic Management) enabled to reduce seek
noise. For example, our WD Caviar Black
sample had very loud seeks. We wouldn’t consider using it on a day-to-day basis
unless AAM was engaged, but doing so increased its random access time to 18
ms. This put it at a disadvantage compared to the 1.5 TB 7200.11, which sounds
as though it was AAM equipped and performs 3 ms faster.

While it is no longer the biggest desktop hard drive on the market
(Western Digital now has a 2TB Green Power), at $130, it currently hits the
capacity/price sweet spot. It is very fast for the amount of noise it generates
and, while it isn’t the most energy efficient, it does give you the best bang
for your buck if you’re looking for high capacity storage.

There is only one factor that prevents us from giving the drive
a clear-cut recommendation and that is the recent
firmware issue with Seagate’s 7200.11 drives. This issue affects most Barracuda
7200.11 models and results in affected drives coming to a sudden, complete,
and irreversible halt in operation, sometimes after months without any problems
or symptoms. Seagate has fixed the faulty firmware, but it will take some time
for these drives to make into the retail channel. It may be wise to hold off
on purchasing a 7200.11, but if you do acquire one, we highly recommend checking
with Seagate to ensure that the updated firmware is installed.

Many thanks Seagate
for the review sample.