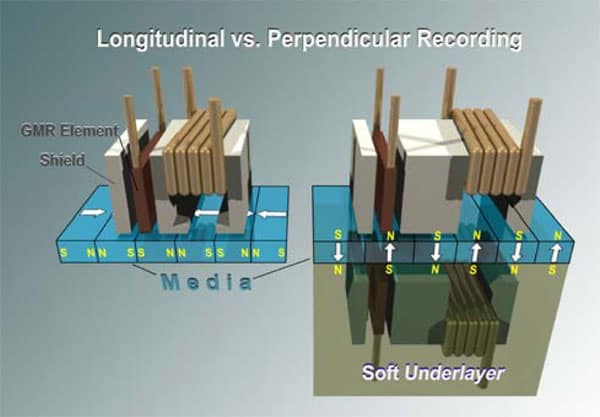 The first perpendicular recording drive to reach the market, this new 5400rpm model from Seagate breaks new ground. It has 30% higher capacity than any other notebook drive, yet requires no more power, generates no more heat, and makes no more noise.

What is perpendicular recording? Essentially, it’s a way of packing
bits on the disc more
closely, thereby allowing higher areal density and greater overall disc capacity. Here is the core of the technology, from Seagate’s white paper (in PDF format), Perpendicular Recording:

“To increase areal densities in longitudinal recording and boost overall storage capacity, the data bits must be shrunk and packed more closely together. However, if the bit becomes too small, the magnetic energy holding the bit in place may also become so small that thermal energy can cause it to demagnetize, a phenomenon known as superparamagnetism. To avoid superparamagnetism, disc media manufacturers have been increasing the coercivity (the field required to write a bit) of the media. However, the fields that can be applied are limited by the magnetic materials making up the write head.

“Seagate has demonstrated a recording areal density with perpendicular recording of 245 Gbpsi (Gigabits per square inch) with a data rate of 480 Mbits per second  more than double the 110 Gbpsi used in todays highest areal density disc drives  and 500 Gbpsi, which will increase the capacity of todays drives 5-fold, is possible with the new technology. At 500 Gbpsi, a 3.5-inch disc drive could store two terabytes of information, a 2.5-inch drive in a laptop could hold 500GB and a 1-inch drive, such as those in MP3 players, could store as much as 50GB of data.”

(For all you techies, Hitachi has an
incredibly geeky (and entertaining) flash animation with sound on the concept.)

SPCR has long recommended notebook drives as the quietest money
can buy (short of solid state drives), but, until now, they were limited to 120 GB at most. Thanks
to perpendicular recording, the Seagate Momentus 5400.3 boasts a capacity of
160 GB. That’s still off the pace set by today’s desktop drives but is nevertheless
impressive  a 30% jump is nothing to sneeze at. As perpendicular recording
matures, further gains are likely to be seen. Once the 2.5″ form factor
goes mainstream, perpendicular recording will help ensure that capacity is maintained.

Initially, the 5400.3 will be available only with a Ultra-ATA interface 
still the dominant interface for notebook drives. A SATA version of the drive
will be available “later this year”. This is disappointing news for
desktop users, as SATA drives can be plugged directly into a desktop system
without requiring a special adapter.

The 5400.3 follows in the footsteps of the
5400.2, which has a place on SPCR’s
Recommended list. Apart from the use of perpendicular recording, the
two drives appear to be quite similar. The 5400.2 was a big improvement over the original Momentus, but
model revisions are not always a good thing, especially for something like noise
that gets little attention from manufacturers.

By now, it should be abundantly clear that the main
improvement in the 5400.3 is the use of perpendicular recording, so it is worthwhile
to examine what this means for the drive. One nice side effect of perpendicular
recording is that it boosts areal density, which means that the data
throughput should increase. The drive should
take less time to access large, sequential chunks of data.

Seek latency, on the other hand, is not likely to be significantly affected,
as latency is affected more by spindle speed and actuator technology than areal
density. These performance differences show up in Seagate’s specifications:
Latency and seek time are identical to the 5400.2, while the internal transfer
rate has increased. 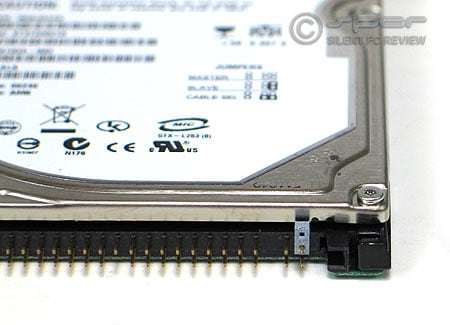 For the most part, there’s nothing out of the ordinary about the drive specs…
except for the power dissipation, which is obviously incorrect. Both idle and
read are rated for 2 watts, while (somehow) writes are supposed to drop to 1.8W.
We’ll have our own measurements for power dissipation later in this review.

Our sample was tested according to our standard
hard drive testing methodology. Our methodology focuses specifically on
HDD noise, and great effort is taken to ensure it is comprehensively measured
and described. Performance is not tested, for reasons discussed in detail in
the methodology article.

Unfortunately, AAM (Automatic Acoustic Management) is not supported
as a user-configurable option on the Momentus 5400.3, which means that our standard
means of generating seek noise via the AAM test function in Hitachi’s
HDD Feature Tool could not be used. Instead, seek noise was generated
by copying a large file set within the drive. Unfortunately, this task does
not require as much random seeking as the AAM test, so seek noise was not as
constant as usual. To compensate, we spent more time than usual listening to
and measuring the seek noise.

Ambient conditions at the time of testing were 18 dBA and 22°C. 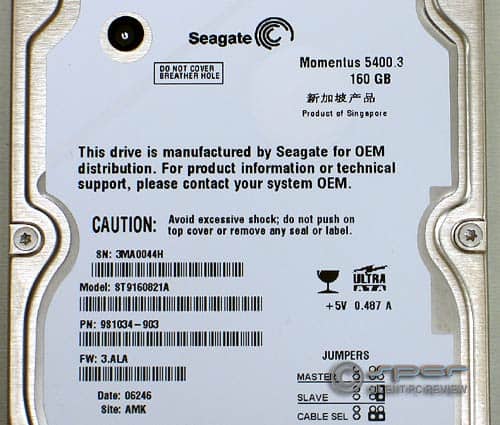 At idle, the 5400.3 was very close to our reference Samsung, which is to say,
very, very quiet. Almost all of the noise consisted of a smooth whoosh that
should blend easily into the background. It had a similar noise character to
the 5400.2, but there seemed to be less of it overall.

Seek noise was different from both of the comparison drives, which both sound
sharp and clicky. The 5400.3 seeks sounded like distant raindrops, making made them difficult to distinguish
during testing… because it was raining at the time! The volume of the seeks was
roughly the same as the 5400.2, and just a little louder than the Samsung. In
an actual system, however, these differences are moot: All three drives would
probably disappear entirely (acoustically speaking).

In addition to seek noise, one other sound could occasionally be heard: The
read/write heads loaded and unloaded with a slight “click” that occurred
about ten seconds after the drive became idle. The click sounded similar to
seek noise in both character and volume, and most users will probably not be
able to tell the difference.

While the idle and seek noise was improved over the 5400.2, the
level of vibration a bit higher. As with the other noises, however,
the difference was slight, and may not make much of a difference in an
actual system.

Keep in mind that the recordings paint only part of the
acoustic picture; vibration noise is not recorded, and drives often sound different
depending on the angle from which they are heard.

The 5400.3 ST9160821A is all about perpendicular recording. It allows a 30% boost in capacity and provides a small increase in
drive throughput. The best part is that these gains come without an increase in noise or power consumption: The 5400.3 is a
touch quieter and consumes a little less power than its predecessor, the 5400.2.
In fact, it is competitive with the quietest 5,400 RPM drive that we
know of, the Samsung MP0402H, which has just one quarter of the 160GB capacity of this 5400.3.

So, what’s the catch? There are two, but both will fade in time:

Aside from these two small issues, the Momentus 5400.3 is a great choice
for use in the quietest systems.

Many thanks to Seagate
for the Momentus 5400.3 sample.