Seagate is one of three manufacturers now making 7,200 RPM Notebook drives. Their Momentus 7200.1 was an acoustic disappointment, but it’s been updated with Perpendicular recording and fall detection in the 7200.2. Did the improvements extend to the acoustics?

Although 7,200 RPM notebook drives have been around for a couple of years, they
are still very much a specialty item found mainly in high performance desktop-replacement
notebooks. They are priced significantly higher than regular notebook drives,
and not all manufacturers have products in this category.

Seagate is now on their second generation of 7,200 notebook drives, the Momentus
7200.2, which brings a higher 200 GB capacity to the table thanks to perpendicular
recording. At the time of its release, it was widely reviewed as the fastest
notebook drive in existence, but Hitachi’s recently released Travelstar
7K200 may have stolen the performance crown. It also debuts a fall detection
technology to improve shock resilience by unloading the read / write heads when
a fall is detected. This feature is optional, available only on the 200, 160
and 80 GB models with a “G” suffix on their model number. The G stands
for “G-Force Protection”. (No word on whether the technology will
also protect the drive from nVidia’s line of GeForce graphics cards.) Fujitsu
also introduced 7,200 RPM notebook drives in two product lines earlier this
year, including one that features perpendicular recording and tops out at 160GB.

We gave the original Momentus
7200.1 a decidedly mixed review. Along with desktop-class performance came
desktop-class noise that negated the main advantage of using a notebook drive
in a full-sized setup: Low noise. This didn’t have to be the case — Hitachi’s
E7K100 was much quieter at the same spindle speed — so we have hopes
that the 7200.2 may be an improvement.

Perpendicular recording is old news now, but it’s probably the biggest reason
for the new model designation of the 7200.2. Thanks to this, Seagate was able
to push the maximum capacity of the line to 200 GB (our sample has 160 GB).
Along with Hitachi’s 7K200 series, this is the largest 7,200 RPM notebook drive
available, but it’s quite far off the largest 5,400 RPM drives from Western
Digital and Toshiba,
which are currently at 320 GB.

The other big addition is the G-Force Protection, which embeds an accelerometer
in the drive that senses when the drive is dropped. Assuming there is enough
fall time (approximately 140 ms based on Seagate’s 8 inch minimum fall distance),
the drive will park the heads to prevent the head crash that would otherwise
occur on impact.

The jumper on the right sets the interface to 1.5 Gbps speed for better compatibility.

Compared to the Momentus 7200.1,
the specifications show a massive boost in sustained transfer rate, and a slight
increase in average seek time, though the latter might be chalked up
to rounding difference. The 7200.2 also updates the interface to full 3.0 GB/s
speed and adds NCQ to the feature list. Best of all, the rated power consumption
is significantly lower — we hope that we see a similar drop in our measured
results. On paper, it’s certainly one of the speediest notebook drives out there,
though it falls into the middle of the pack when full-sized desktop drives are
thrown into the mix.

Our sample was tested according to our standard
hard drive testing methodology. Our methodology focuses specifically on
HDD noise, and great effort is taken to ensure it is comprehensively measured
and described. Performance is not tested, for reasons discussed in detail in
the methodology article. For comprehensive HDD performance testing results,
we recommend Storage
Review, who have a long established reputation as the specialist in
this field. Their review of the Momentus 7200.2 can be found in a
roundup of several 160 GB notebook drives.

The 7200.2 was compared with our reference notebook drive, Samsung
MP0402H, that we profiled in a recent notebook
drive review. It was also compared against its predecessor, the Seagate
Momentus 7200.1.

Unfortunately, AAM (Automatic Acoustic Management) is not supported
as a user-configurable option on the Momentus 7200.2, which means that our standard
means of generating seek noise via the AAM test function in Hitachi’s
HDD Feature Tool could not be used. Instead, seek noise was generated
using the seek test of HDTach
3.0.4.0.

Ambient conditions at the time of testing were 18 dBA and 22°C. 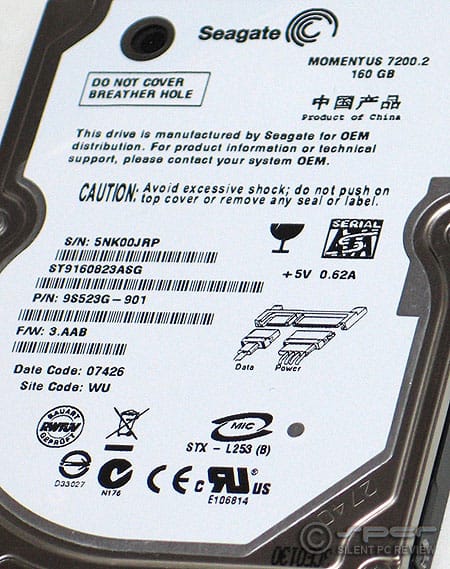 Although it measured 1 dBA@1m lower than its predecessor, the noise quality
of 7200.2 is not really an improvement. Subjectively, the measurement can be
heard in the slightly lower amount of whooshing — the sound of air turbulence
over the disk spinning at 7,200 RPM. However, there was also a high pitched
electronic squeal that was lacking in the original. The squeal was not directional
and could be heard from almost any angle.

Seek noise saw a similar 1 dBA@1m improvement, and this difference was
audible subjectively. The seek noise had a deeper quality with less sharpness
on each individual seek. The volume and the amount of rumble increased a lot
when the drive was placed on a hard surface, indicating that resonance could
be an issue when the drive is hard-mounted.

The level of vibration was much higher than any other notebook drive we’ve
seen. The vibration rating of 7 is the lowest score we’ve ever given a notebook
drive, and there’s no question soft-mounting could improve things here —
it’s the only notebook drive we’ve encountered that actually needs it.
Making things worse is the 7,200 RPM rotation speed, which has a fundamental
frequency of 120 Hz — significantly more audible than the 90 Hz frequency
of a 5,400 RPM drive. The only good thing we can say is that it’s possible we
got a bad sample. It’s so far out of line with our usual expectations (and the
original 7200.1) that we can’t help but wonder if most of samples are better
than this.

In comparison to the Samsung reference drive (and most regular notebook drives)
there is no contest. As with the original 7200.1, the 7200.2 sounds more like
a desktop drive than a notebook drive. While we have recommended notebook drives
as ultra-quiet alternatives to regular drives in the past, that recommendation
does not apply in this case.

The brightest spot for the 7200.2 is the amount of power it consumes —
it’s back in line with our expectations for notebook drives, consuming a single
watt in idle, and jumping up to ~3W during seeks. This is a huge improvement
over the 7200.1, which consumed more power than any other notebook drive we’ve
tested.

As a performance drive, the speedy 7200.2 has its merits. However,
bear in mind that this is Silent PC review. Our bias favors low noise,
and, acoustically, the 7200.2 doesn’t pass muster. Our interest in notebook
drives is largely based on using them as quieter alternatives to desktop drives,
but our 7200.2 sample is no quieter than a good desktop drive, it’s slower,
smaller and four times the price. We could hope this is an anomaly, but without
at least a handful of samples to compare, there’s no way to know.

Taking noise out of the equation, it’s possible to be a bit more
positive. Elsewhere on the web, it has been widely reviewed as the fastest notebook
drive (though this may already have changed with Hitachi’s latest offering).
Power consumption has been brought back in line with most other notebook drives,
and, if you pick up the right model, the G-Force Protection should do wonders
for road warriors.

We have no doubt we are going to see the market for speedy notebook
drives expand, so we look forward to seeing a quiet drive in this category some
time in the future. Perhaps the 7200.3 will win our affection…

Many thanks to Seagate
for the Momentus 7200.2 sample.