Seagate’s Pipeline series of hard drives are aimed at DVRs, HTPCs and other devices designed to serve up media. Since performance is not critical for these types of applications, we assume that such a drive would be power efficient and quiet, two qualities that are right up our alley.

Seagate’s Pipeline series of hard drives are aimed at DVRs, HTPCs and other
devices designed to serve up media. Since performance is not critical for these
types of applications, we assume that such a drive would be power efficient
and quiet, two qualities that are right up our alley. The Pipeline HD series
are available in 160GB, 320GB, and 500GB capacities, while the 1TB drive we’ll
be looking at today is designated as the only Pipeline HD Pro.

(Editor’s Note: What’s fascinating is that the smaller models run at the unique spindle speed of 5900 RPM. See my Postcript at the end of this article, on page 3.)

The Pipeline HD Pro is a 3-platter drive, but spins at the standard 7200 RPM,
so we doubt it will be a threat to Western
Digital’s Green Power drive where it counts: power consumption, vibration,
and overall noise level. However, Seagate has made some nice strides reducing
the noise level of their drives as of late though so we have high hopes for
the 1TB Pipeline HD Pro — if the drive has been tweaked for multimedia,
it has the potential to be one of the quietest 7200 RPM desktop drives. 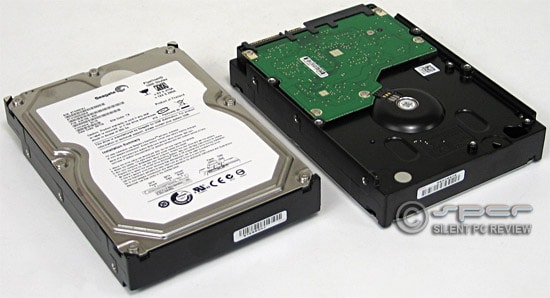 The Pipeline HD Pro housing is virtually indentical to the Barracuda 7200.11’s.

A run-down of the published specification tables for the Pipeline HD Pro versus
the 7200.11 (1TB models) shows that the Pipeline drive is claimed to have a
higher sustained transfer rate and lower power consumption. Despite the fact
it one less platter than the 7200.11, the rated acoustics are higher — this
seems counter-intuitive.

Our sample was tested according to our standard
hard drive testing methodology (though testing now takes place inside
our anechoic chamber). The test drive sample was compared against a few other
drives. Our methodology focuses specifically on HDD noise, and great effort
is taken to ensure it is comprehensively measured and described. Performance
is covered only lightly, for reasons discussed in detail in the methodology article.
For comprehensive HDD performance testing results, we recommend Storage
Review, who have established a long reputation as the specialist in
this field.

Ambient conditions at time of testing were 11 dBA and 20°C.

Acoustically, our Seagate Pipeline HD Pro sample was a significantly quieter
than both our 4-platter 7200.11 1TB and 1.5TB units. We measured a 2-3 dBA@1m
improvement at idle, and 3 dBA@1m during seek. The overall sound was broadband,
except for a 120Hz fundamental tone of its motor spinning at 7200 RPM. The noise
character was similar to previous the 7200.11 Seagates, but noticeably softer
with less humming when placed on a soft surface. It was the quietest 7200 RPM
desktop drive we’ve ever tested in our anechoic chamber.

Despite the excellent overall noise level, the vibrations it generated were
quite strong, on par with the 1.5TB
Seagate 7200.11 and Western Digital
Caviar Black 1TB model. Seagate is pushing the Pipelines as the ideal choice
for DVRs, and such devices would benefit from the drive’s low motor and seek
noise. However, the vibrations produced by a Pipeline HD Pro hard-mounted in
a DVR-type device or a PC would be very noticeable if the rest of the components
were adequately quiet. Once again, soft-mounting is highly recommended.

Power consumption was excellent — just above 7W idle and 10W during seek.
It is a fair improvement over 4-platter drives like the Seagate 7200.11’s, and
performance-oriented drives like the WD Black.

Subjectively, the overall noise level of the Pipeline HD Pro was very close
to that of Western Digital’s
1TB Green Power. We never had the opportunity to measure a GP in our anechoic
chamber, but our vibration and power consumption figures are still valid. The
Pipeline was very quiet, but as a 7200 RPM drive, it simply could not compete
with a GP running at 5400 RPM when it came to vibration and power efficiency.

The Pipeline HD Pro posted an impressive average read speed of 101.8 MB/s,
beating our 1TB 7200.11 sample by 14MB/s. On the down-side, CPU utilization
was unusually high at 10% and random access time was very poor at 17 ms.

We are used to seeing high random access times on drives that have AAM (Automatic
Acoustic Management) enabled to reduce seek noise. Seagates do not support AAM,
but it’s fairly clear that they’ve done the equivalent of setting AAM to the
quietest setting. As the drive is geared toward serving media, it is logical
to sacrifice some speed for quieter operation.

If our 1TB sample was any indication, Seagates entire Pipeline
series would be a fine fit for any system where quiet operation is valued. It
was significantly quieter than Seagate’s other high capacity drives, both idle
and during seek. It is unfortunate we no longer have a Western Digital Green
Power sample to compare it to in our anechoic chamber — we expect the results
would have been close. It should be noted that the overall noise the drive generates
alone does not reflect how quiet it will be in a typical PC with a hard-mounting
system. Our sample had a high level of vibration — this is one area where
the Pipeline HD Pro cannot compete against the Green Power. A good suspension
system would level the playing field in this regard.

The drive’s read speeds were excellent, but random access time
was very poor at 17 ms. This is one of the reasons for its low noise level,
especially during seek. For media-type applications, it does not need to be
blazing fast so Seagate decided to trade away some performance for quieter operation.
The Pipeline HD Pro, being a 3-platter drive, was also fairly power efficient,
at least for a 7200 RPM model.

Seagate claims it would make a better media drive, but assessing
whether that is true leads us into a grey area. The specification sheet does
list an unusually high maximum operating temperature of 75°C which would
be beneficial in a cramped DVR or HTPC that lacks airflow and is left running 24/7. The drive also “supports
up to 12 simultaneous high-definition or standard-definition video streams”
though we have no reason to believe a regular hard drive wouldn’t be just as
capable. You could say Seagate has not wholly sold us on the idea of a “HTPC-optimized” drive. You may wish to give them the benefit of the doubt, however, and make the Pipelines your preferred drives for HTPC applications.

As a consumer drive, the Pipeline HD Pro is in an awkward position.
For high performance, the Western Digital Black is
a better option, as is the Green
Power for quiet efficient operation. If you require high capacity, there’s
Seagate’s 7200.11 1.5TB
drive. All three of these models are less expensive and more widely available
than the Pipeline HD Pro. The drive does not excel enough in any one area to
distinguish itself enough from the rest of the pack. Combined with the high
sticker-price, it’s a tough sell for the average end-user. Still, for some, the Pipeline’s high temperature tolerance and long continuous use design may make it worthwhile.

Many thanks Seagate
for the review sample.

Discuss this article in the
SPCR Forums