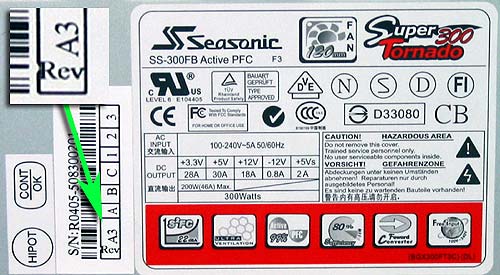 The latest A3 Revision of the Super Series is Seasonic’s attempt to fix intermittent fan controller problems that have dogged the previous revisions of these PSUs. Last week I received a package of four Rev. 03 Super series samples: One each of Super Tornado 300 and 400, and Super Silencer 300 and 400. Our revisit shows that not only has the fan controller been fixed, Seasonic also managed to make big improvements that might even justify the launch of a new line.

The Seasonic Super series of PSUs were reviewed almost a year ago. The Super Tornado and Super Silencer models were both rated as exceptional products with very low noise and the then unheard-of high efficiency of ~78%. They went to the top of our list of Recommended PSUs and quickly became the PSUs of choice among PC silencers everywhere.

Since the rosy product launch, there have been fan and fan controller anomalies reported by users of both Tornado and Silencer models. Some of the original Revision A1 Tornado models were afflicted with a fan that would sometimes get stuck in a non-spinning, squealing mode. A change in the fan controller circuit in Revision A2 fixed the problem, but some of them exhibited somewhat random ramp-ups in fan speed. This problem affected the Silencer models too, as all the Super series share the same fan controller circuitry. I was able to duplicate this second round of problems with samples on my test bench, and reported the problems directly to my contacts at Seasonic. In the meanwhile, the Super series PSUs were demoted in the SPCR Recommenced PSUs list.

The current Revision A3 is Seasonic’s final fix for these problems. Last week I received a package of four Rev. 03 Super series samples: One each of Tornado 300 and 400, Silencer 300 and 400.

I am happy to report that the fans and the fan controllers in the Revision A3 Super series exhibit none of the strange anomalies noted in the past. A completely different fan controller circuit seems to be employed.

There are other improvements, including even higher efficiency than in the originals. Each change is minor, but when they’re all put together, it’s a big enough change that a revisit seems appropriate, especially as the Super series models have been moved back up to the top of the recommended PSUs again.

If you have not read the original reviews, you may want to refer back to them as you read this article: Super Silencer 400 and Super Tornado 300. Rather than go over all the details, the focus here is on the changes and core performance issues, with the Tornado 300 and the Silencer 400.

The packaging itself has not changed except for a small sticker that states Serial ATA Ready. Inside the box, there is an adapter which converts a 4-pin Molex to a single SATA power connector.

Internally, two changes are visible: A different fan and a mini-PCB that appears to be the fan controller circuit. 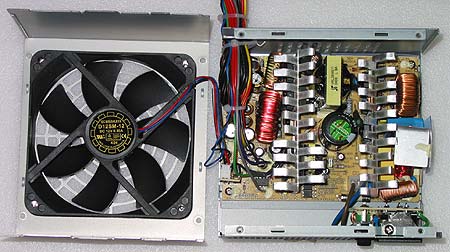 The new 120mm fan is a medium-speed Yate Loon. It is the same model used
in some Fortron and Nexus PSUs (except for color).
The photo on the right below shows the new mini-PCB that appears to be the
fan controller circuit.

A complete set of tests were conducted using the current SPCR PSU Thermal Load Testing Rig. Please follow the link to find out the full details of our testing setup, which we believe is the most comprehensive of any hardware review site in the world. Thermally, it may even be more realistic (and tougher) than the testing setups of safety certification agencies.

Yate Loon Fan: This fan is quieter than the SuperRed in the original Tornado. It has a smoother more benign sonic signature and remains smoother as it speeds up. The comments about the Nexus 3500 PSU fan noise can be applied here; they use the same fan. However, the Super Tornado has a smarter fan speed / thermal curve.

Efficiency: It is significantly higher than the original Tornado. The min and max numbers are 78% and 82% with this new one; the old one ranged 75.5% to 77%. The Rev.03 efficiency is tops, on par with that of the Enermax Noisetaker 475.

Noise: Like the original, at low power and thermal levels, the fan voltage stays low at modest output power levels, and the noise stays very low as well. It is not until the air at the intake side of the PSU reaches 34°C that the fan noise climbs above 30 dBA/1m, our definition of quiet. The noise at full load with an intake temperature of 36°C is just 34 dBA/1m, which is impressively quiet, considering the power output. The 10.5 fan voltage at max power suggests that either this is the maximum voltage the fan controller will give the fan, or that higher voltage is available only at higher temperature.

Overall: The Super Tornado Rev.03 is an improvement over the original (Rev.01) in every way. It’s not dramatic, but definitely real and probably noticeable in actual use.

The basic packaging has not changed, but a prominent sticker declares the unit to be PCI Express Ready, and compliant with ATX12V v2.0 as well as EPS12V standards.

The features cited are significant. The same sticker is also on the Super Tornado 400 Rev.A3 sample box, but not on the Super Silencer or Tornado 300 Rev. A3 sample boxes. An e-mail from Seasonic clarified the differences between the lower and higher power Rev. A3 models, and the reasons for them.

“The Seasonic Super series were the first ATX12V v1.3 PSU models in the market when they were introduced last year. The new ATX12V v2.0 PSU guide released a few months ago specifies guidelines for compliance with motherboards that integrate PCI Express. Since Seasonic has already developed designs that meet the new guidelines, Seasonic chose to combine ATX12V v2.0 features along with EPS12V features to make our PSUs useful with high-end desktop PCs as well as professional multi-CPU workstations.

“Since this class of computers requires high power, only the Super Silencer 400 and 460, and the Super Tornado 400 will be upgraded. These upgraded models should be in the US retail marketplace by the end of June. The 300W and 350W models in the Super series remain ATX12V v1.3 compliant. By Q4 2004, Seasonic will offer ATX12V v2.0 models in every power rating.”

So you have it from the horses mouth. Here are more photos that show what it means in a practical sense. 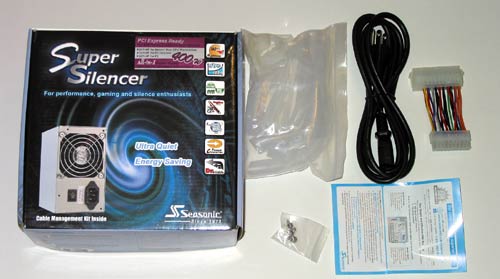 The 24-pin to 20-pin ATX adapter is a new addition to the contents.

Internally, the only obvious change is the addition of that little PCB fan controller circuit, which looks identical to the one in the Super Tornado 300 sample.

A complete set of tests were conducted using the current SPCR PSU Thermal Load Testing Rig. Please follow the link to learn about the full details of our rather complex testing setup.

Efficiency: Like the new Tornado, this Rev.03 Silencer is significantly more efficient than the original Silencer. The min and max numbers are 79% and 82% with this new one; the old one ranged 73% to 78%. Together with the Enermax Noisetaker 475 these Rev.03 Super series Seasonics are substantially above all the other PSUs we’ve tested.

Noise: Like the original, at low power and thermal levels, the fan voltage stays very low, and the noise stays very low. Interestingly, >30 dBA/1m point is reached at the same power and thermal conditions as with the Super Tornado Rev.03: 200W output and 34°C intake air temperature. The noise at the 400W full load with an intake temperature of 41°C is just 42 dBA/1m, not quiet; it is similar to the original.

Overall: The Super Silencer Rev.03 is a big improvement over the original (Rev.01) in efficiency. While this may help with system temperature, longevity (due to reduced temperature) and electricity consumption, it has not been used to lower noise.

The Revision A3 versions of the Seasonic Super series PSUs are more than a fix of the fan controllers. They are serious improvements on products that ? without the fan controller flaws ? were already excellent.

The big gains in efficiency were apparently achieved by fine tuning of the existing circuit design over the past year of production. Seasonic said that as the production of the Super series increased, so did the knowledge database that the engineers could draw upon. The practical empirical data provided insights that allowed them to tweak the circuits for maximum gains. It’s a positive example of the “continuous improvements” cited on so many product specification documents.

The Yate Loon fan in combination with the new fan controller circuit makes for a real and audible reduction in the noise of the Super Tornado, which is especially nice at higher power output. At the 300W output, it is probably the quietest of all the PSUs tested thus far. (Conditions that vary significantly from the SPCR test rig can skew this conclusion, however.)

The ATX12V v2.0 / EPS12V compliance of the 400W and 460W models in the Super series will certainly be welcome by buyers assembling high power systems and seeking compatibility with future system upgrades. PCI Express is certainly going to be here by the fall.

Revision A3 has brought the Seasonic Super series back to the top of SPCR’s Recommended PSUs. Nicely done!

Our thanks to Seasonic and Seasonic USA for the review samples and for their kind support.