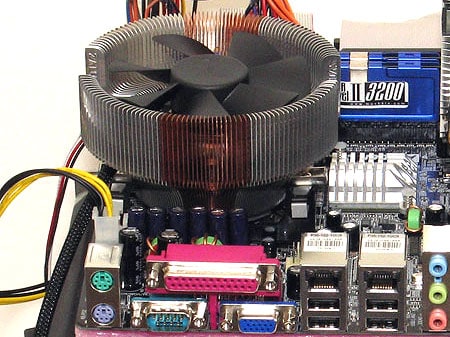 It is a tome about the merits of the Pentium M 2.0 Dothan with 855-chipset desktop boards by AOpen and DFI for silent, powerful computing. We\’ve waited 18 months for these boards and our Pentium M desktop platform review was two months in the testing and writing. …

My review of the new Pentium M desktop motherboards showed clearly that the stock heatsinks supplied with the DFI and AOpen boards are
good performers with their fans at full speed. They are probably perfectly adequate coolers with their fans
running at a much quieter 5V, providing the CPU is undervolted. But “adequate”
and “much quieter” aren’t what we shoot for here at SPCR.
After all, this is SilentPCReview, not sort-of-SilentPCReview. And these are the long-anticipated super cool yet fast Pentium M boards. So here is an assessment of a couple of modded, after-market, ultra-quiet cooling solutions for these P-M boards.

With the AOpen AOpen
i855GMEm-LF socket 478 heatsink retention bracket, what kind of performance could an aftermarket, high performance
heatsink give us? On the other hand, perhaps the first question that must be asked is whether
we can even use a regular P4 heatsink on this Pentium M CPU?

The Pentium
M CPU socket has a lower profile, and the CPU itself is thinner due to the absence of the P4’s
Integrated Heatspreader. I broke out my fine measuring tools — calipers and depth mics — to check
the dimensions of the P4 and Pentium M heatsinks, CPU’s and sockets.
The overall height of the P-M mounted in its ZIF socket turns out to about .075-.078″ shorter than a P4 mounted on a socket 478. This would indicate that any regular
P4 heatsink would need to be spaced down by about .075″ on the AOpen.

But hold on: Intel’s P4
Thermal Design Guide calls for 75lb/ft ± 15lb/ft of clamping
force on the CPU heatspreader while the Pentium
M datasheet calls for a maximum of 689KPa, or 14.4lb/ft. Could this be due to the fragile,
unprotected die of the Pentium M? Possibly, but for whatever reason, the
clamping force on the P-M CPU is just one-fifth that of the P4. Lower CPU core height with a P4 HS would result in reduced pressure. Hmm… Perhaps the missing 0.075″ on the Pentium M stack height is serendipitous!

I decided to try the trusty ‘ol Zalman
7000AlCu. The Zalman’s screw-down
mounting method would allow me to have a good feel for how much pressure I apply to
the Pentium M die. The 7000ALCu
was one that I had specially
modified in anticipation of something like this project. I swapped
the stock Zalman 92mm fan for one of the ultra silent (15dBA
@ 5V – mp3 sample) Nexus “Real Silent” 92mm fans. The Zalman
7000AlCu is a very efficient heatsink, but its fan is far from the ultimate in low noise. The Nexus 92mm is by far
the quietest 92mm fan I’ve heard, although it doesn’t blow tons of air.
I figured it would do OK on the 7000 in cooling a
21W CPU.
The Nexus fan + Zalman HS combo is extremely quiet; at 12V it is quieter than the stock Zalman fan running at 5V! At 5V, I can hear no noise at all from the Zalman / Nexus combo unless I position my ear just
3-4″ away.

I placed the heatsink on top
of the CPU and started tightening the two Zalman mounting screws, paying special
attention to the force required. As the screws were getting close to bottoming
out, I could feel that the tension on the CPU was definitely less than if it
had been a P4. It seemed to have plenty of tension when the screws were all the way in. I wasn’t able to rock the heatsink, although I could
twist it a bit. I decided to fire it up and watch the temps.
If something didn’t seem right, I’d make some shims
to place on top of the Zalman mounting arms to apply more pressure to the CPU.
The idle temp stayed stable at only a few degrees
over ambient, and didn’t change with extra downward pressure on the heatsink. I declared the mounting a success and proceeded with thermal testing.

This HSF combo
does a fantastic job of cooling the P-M. There is basically no performance
difference between the fan at 12V or at 5V. SO… I tried the heatsink
without the fan. Amazingly, the temperature topped out at only 53°C
at full load, no matter how long CPUBurn ran. Fanless operation
with a Zalman 7000AlCu heatsink is a very viable option. Add
a bit of case airflow, or perhaps some ducting, and it will run even cooler.

On further thought,
I wouldn’t bother running the AOpen / Pentium M fanless. The 7000 with the Nexus at 5V is effectively
silent, and keeps the CPU over 20°C cooler than without a fan. (The fan is only flowing
a whopping 7 CFM and it keeps the CPU at just 10°C over ambient!) Having a bit of air blowing on the motherboard power supply components can only help. Motherboard makers (Intel included) rely on airflow from a HS fan to help cool the power components around the CPU.

Given that this Zalman is only one of a number of very high performance heatsinks, there are obviously many other options for fanless or low airflow cooling. All you need to look for is a high performance HS with good spacing between fins, the right orientation for good convection or auxiliary airflow from other fans in the case, and a good mounting clip that allows you to apply pressure safely or is easily adjusted for tension.

What about the DFI 855GME-MGF board?
The
hole pattern on the DFI cooler measures 40mm on center and 58mm diagonally which
is a bit different than the hole pattern on any NB cooler in our lab. Both Swiftech
and Thermalright
make high performance NB coolers and they have a decent amount of adjustability
built into the mounting system, which makes them usable… but they take only 40mm fans, so we’re not really getting anywhere here.

How
about a large fan suspended over the heatsink on something like a Zalman fan bracket or similar? After looking at both the Swiftech MCX159
and the Thermalright NB-1C, I opted for the Thermalright. It
has fins spaced wider apart than the Swiftech; it should work better with a low
airflow fan. 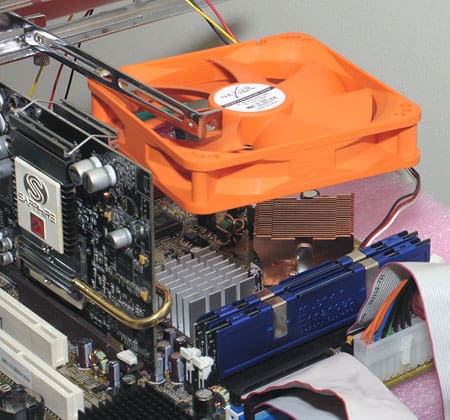 The chosen fan was a 120mm Nexus “Real Silent” fan, perhaps
the quietest 120mm fan available. Due to its large footprint, it gives
some additional cooling to the Northbridge and memory DIMMs. It was
mounted above the board using a Sunbeam
Wherever PCI Rack. Testing commenced on the stock DFI heatsink with its
fan removed and the 120mm Nexus running at 5V. After this, the DFI heatsink
was removed and replaced with the Thermalright NB-1C and the thermal testing was
repeated. Both heatsinks cooled sufficiently in this manner, but neither did
a fantastic job. Low 50°C is probably perfectly safe, and the Nexus is nearly
silent at 5V so this could be an acceptable solution for cooling the DFI board
as quietly as possible. [Editor’s Note: Not all Nexus 120 fans start consistently at 5V; 5.5V is probably a safer voltage.]

This final round of testing proved that the AOpen Pentium M board
can easily be run with silent cooling for the CPU, whether from a 15 dBA/1m Nexus
fan modded Zalman 7000 HS, or a fanless Zalman 7000. The DFI is a bit more problematic due
to the tiny proprietary heatsink and non-standard mounting holes. Totally fanless is not an option, but the suspended 120mm Nexus does a sufficient job at a pretty darn
quiet setting. Modded as described above, either setup would
be quiet enough for even the most hypersensitive quiet PC enthusiast.