The latest version of the SilverStone Fortress FT02 only adds USB 3.0 support and improved 18cm fans, but its innovative cooling design still gives it an edge against today’s best quiet, high performance cases. A complete revisit of this big, beautiful case.

Three years ago, SilverStone released the Raven, an enormous EATX tower with an innovative rotated motherboard layout that blew us away. Traditional tower cases have one or two small intake fans located at the front where they are closer — and therefore louder — to the average user, and where they are impeded by case doors, hard drives and external drive bays. SilverStone’s clever design featured massive fans drawing air from the bottom panel to blow it in a straight line out the top, enhancing the cooling of tower CPU heatsinks and graphics cards with fans.

The original Raven had an unusual appearance and build composition for a SilverStone. The external design took cues from a stealth bomber, with a black plastic shell and sharp angles, a departure from SilverStone’s usual understated elegant aesthetics. The Raven RV02 still had a plastic exterior but was toned down considerably. The Fortress FT02 reviewed two years ago sported the same internal design but was dressed in a more Silverstone-esque aluminum exterior.

Recently, SilverStone sent us another version of the Fortress FT02, a slightly updated model with USB 3.0 capability and improved 18cm bottom fans. As the RV02/FT02 is still popular among our readers, we felt it would be appropriate to examine this newer FT02 and see how it stacks up to more recent towers like the Antec P280, the gargantuan Cooler Master Cosmos II, and the latest iteration of Silverstone’s Raven, the RV03.

Though obviously not the first time we’ve encountered the FT02, we still can’t get over how great it looks. It is Applesque, bringing to mind the Mac Pro and other Mac tower PCs of the past. This is not a flashy gamer case with multiple LED fans on every side or decals plastered on the side panels. It’s a distinctively clean-looking case with an aluminum shell, rounded corners, and solid build quality. The exterior is not bushed, which would result in visible hairlines. The FT02’s smooth matte finish on its aluminum unibody frame is achieved by sand-blasting, followed by anodizing. This is what Apple also uses for their Mac Pro, Macbook Pro, etc. There are few external clues to how different the innards are from a typical tower (though there are versions with a side window).

While the exterior is mostly aluminum, the internal frame is steel, and it feels solid.. There are five 5.25" drive bays, five 3.5"/2.5" drive mounts, and a metal frame for a 2.5" drive can be used on the left side of the optical drive cage. Cooling is provided by three 18 cm fans on the bottom and a single 12 cm model at the top.

The top fan was mostly smooth but had an occasional ticking sound that was hard to make out, akin to a wire being pushed slightly into the path of the fan blades every 5~6 seconds. The bottom fans had a more consistent clicking character, like other Air Penetrators we’ve seen before.

The combined baseline noise level covers an unusually wide range. Manual control (of voltage) is required to balance the noise generated the top fan and the bottom three fans. The combination of the top fan at 7V and the bottom fans at 10V on the low setting is a good starting point. This combination results in a total SPL of just 17 dBA@1m. All four fans running at full tilt results in an SPL of 38 dBA@1m — very loud by SPCR standards.

None of the fans are perfect, but together, muffled by the side panels with a system assembled inside, their negative characteristics become muted, especially at higher fan speeds when the random noise of air turbulence dominates. At lower speeds, some clicking is audible from a meter away, but it’s fairly soft and innocuous. The combined noise is a low-pitched rumble, not becoming offensive until approximately 30 dBA@1m SPL.

At idle, the HD 4870 configuration produced a very low 21 dBA@1m with the stock fans set to 7V/10V (low). The system was well cooled. No noticeable vibration passed from the hard drive to the case.

On load, the GPU fan speed peaked at 1600 RPM, causing a 3 dB increase, which is excellent for this test system. While not quiet, the HD 4870 stock cooler is among the better sounding blower fan models, so the acoustic profile consisted mostly of a soft, hissing sound, and much of the clicking emitted by the system fans was muted. Temperature increases were modest, 14°C for the CPU, 21°C for the GPU, and 10°C for the Southbridge chip directly beside the graphics card. Increasing the fan speed to 9V/11V (low) helped somewhat, at a modest noise cost.

In our single graphics card configuration, the FT02 produced the same amount of noise as the Raven RV03, but the system components were slightly cooler, the hard drive in particular. Recent offerings from Antec, the P280 and Solo II, couldn’t compete with either of the SilverStone cases. 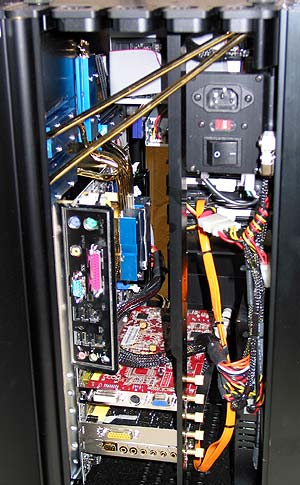 Cooling in the FT02 is effective enough that the addition of a second HD 4870 had no measurable acoustic effect at idle, and system temperatures remained the same except for the GPU, which rose by 5°C. With the fans set to 7V/10V (low), the noise peaked at 28 dBA@1m. Bumping up the system fans to 9V/11V (low) dropped temperatures a bit without affecting the noise level because the improved airflow reduced the speed of the GPU fans. Slightly better cooling was recorded with the fan speeds at 12V/12V (low), but at 30 dBA@1m, the system was noticeably louder.

We took noise measurements from from the front right, in addition to the ones taken normally from the front left. From the right side, the SPL was 1~2 dB higher at idle but about the same at full load. The motherboard and the supporting tray appear to block some of the noise generated by the components when the user is seated to the left of the case.

In our CrossFire test system, the FT02’s lead over the RV03 widened considerably. It produced lower temperatures, and the overall noise level was 3~4 dB lower, a huge margin. Even when we measured the Fortress from its bad side (on the right where the motherboard tray doesn’t block any noise), it still beat the Raven.

The In Win Dragon Rider has been our noise/cooling champ for the last year but it looks to have been dethroned by the FT02, at least for noise. The Dragon Rider’s side fans achieve seemingly unbeatable CPU and Southbridge cooling, but the wide open side panel leaks a lot of noise emitted by its smaller, less efficient system fans. (It is possible that the Dragon Rider may be as quiet as the new FT02 on its ‘better’ side… but we never measured it from the right.)

Though it sports the same design as it did two years ago, today’s SilverStone Fortress FT02 remains one of the best performing towers we’ve tested, and it is almost certainly the quietest for housing a high power system. It’s a very deep case due to the rotation of the motherboard but the three 18 cm fans make the extra depth worthwile. Drawing air from the bottom, the 18cm fan vents point away from the user, limiting the audible noise. Thankfully, the latest version doesn’t mess with the original’s design, just adding USB 3.0 support and a minor improvement in the fans themselves.

The case has a refreshingly clean exterior compared to much of the competition, with smooth classy lines in its unibody aluminum shell. Build quality is good and system assembly is easy, particularly the 3.5" drives with the easily removable caddies, though five drives can be accomodated. Dust haters will enjoy the filtered intake fans, which outnumber and outsize the exhaust fans, creating a positive pressure environment.

For a premium case, the FT02 is a little short on extras. The location of the fan controller — under the top cover near the back — is inconvenient, and it has only two speeds; a front-mounted variable controller would be preferable. The SATA backplane module is a nice bonus but only one is provided. (Additional units sold separately). Finally, the ancillary power supply mounting system, consisting of a velcro strap around the body and a plastic wedge held on by two screws, seems like a stopgap measure rather than a real solution.

The Fortress FT02 is a compelling product, a nice balancing act that delivers excellent performance at low noise, wrapped in an elegant form. The street price of US$230 doesn’t seem bad considering the construction, features, and performance, and the fact that there isn’t anything comparable available except for other SilverStone offerings. If you don’t mind a plastic and slightly angular exterior, the Raven series is a suitable alternative. The US$160 RV02 in an especially good value as its innards are identical to that of the FT02. The US$140 RV03 is less so, performing a bit worse as its smaller footprint forced SilverStone to equip it with only two 18 cm fans, though it does offer five additional hard drive placements.

Our thanks to SilverStone for the Fortress FT02 case sample.